Living with Duchenne Muscular Dystrophy is frustrating and humbling

I was diagnosed with Duchenne Muscular Dystrophy when I was six years old.

I didn’t have the same stamina as other kids on my soccer team, and my parents knew something was wrong. We finally realized that I had a rare genetic disease that affects my muscles after a trip to the doctor’s office.

At that point I really didn’t know what that meant, only that I couldn’t keep up with my classmates anymore. I wouldn’t grow up to be the football player I had always dreamed of.

Duchenne Muscular Dystrophy is a degenerative, genetic muscle disease that leaves sufferers with an average life expectancy of 25. It is a sex-linked genetic disease only affecting boys, hindering the production of a protein in your muscle cells that holds together your cellular membrane. In many cases, boys are left wheelchair bound after losing the ability to create that protein entirely.

My body still produces a small amount and I’ve stuck closely to a regime of stretching and resting.  As a result, I am fortunately not yet at that stage.

Any strenuous exercise (running, lifting, even just stair-climbing) is enough to tear the cellular membrane, leading to my muscles breaking down and never being able to repair themselves. So coping with the disease is a combination of conserving energy, taking supplements and steroids that help reduce inflammation and retain muscle strength.

When I was diagnosed it came as a shock to us all, and at the time there were no real treatment options. It was scary, but my parents tell me I was more peaceful now I finally understood why I couldn’t keep up with the other kids. Whenever someone asked, I told them that I had “leg problems,” without knowing the full extent of the disease I had. 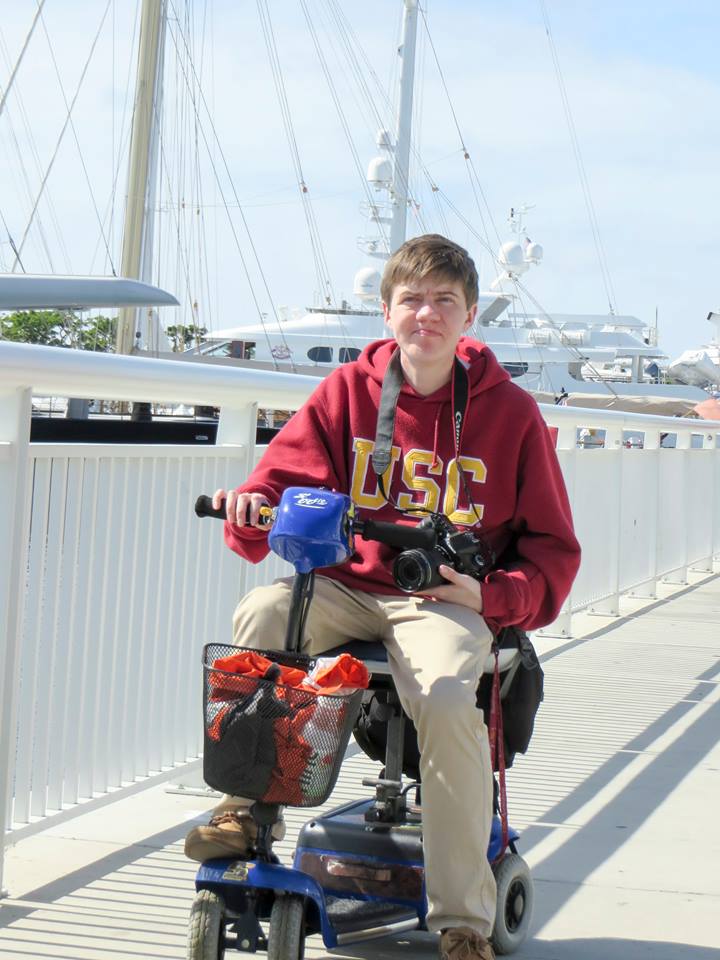 My scooter and I on a mission

My little blue scooter drew everyone towards me throughout elementary school and middle school. Everyone wanted a ride because they thought it was the coolest thing they’d ever laid their eyes on. I remember being so frustrated when asked why I needed my scooter – being able to walk didn’t qual not needing a chair, and I wanted to be treated like a normal person.

At the time, there was a lack of work being done on the disease and no one really knew about it. My parents started their foundation, CureDuchenne, to try to jump start research for a cure.

There are numerous examples of parents helped me through my childhood when physical activity was too much. On the final eighth grade trip to Yosemite, my dad fashioned a backpack to carry me in up part of Half Dome. My mom was as equally as committed to helping me through my disease because she helped grow my faith both in God and myself. Even though Boy Scouts is a thought of a outdoors physical activity, I took to my dad’s shoulders for long hikes and during my Eagle Scout project, I organized the physical labor without having to do any of it. 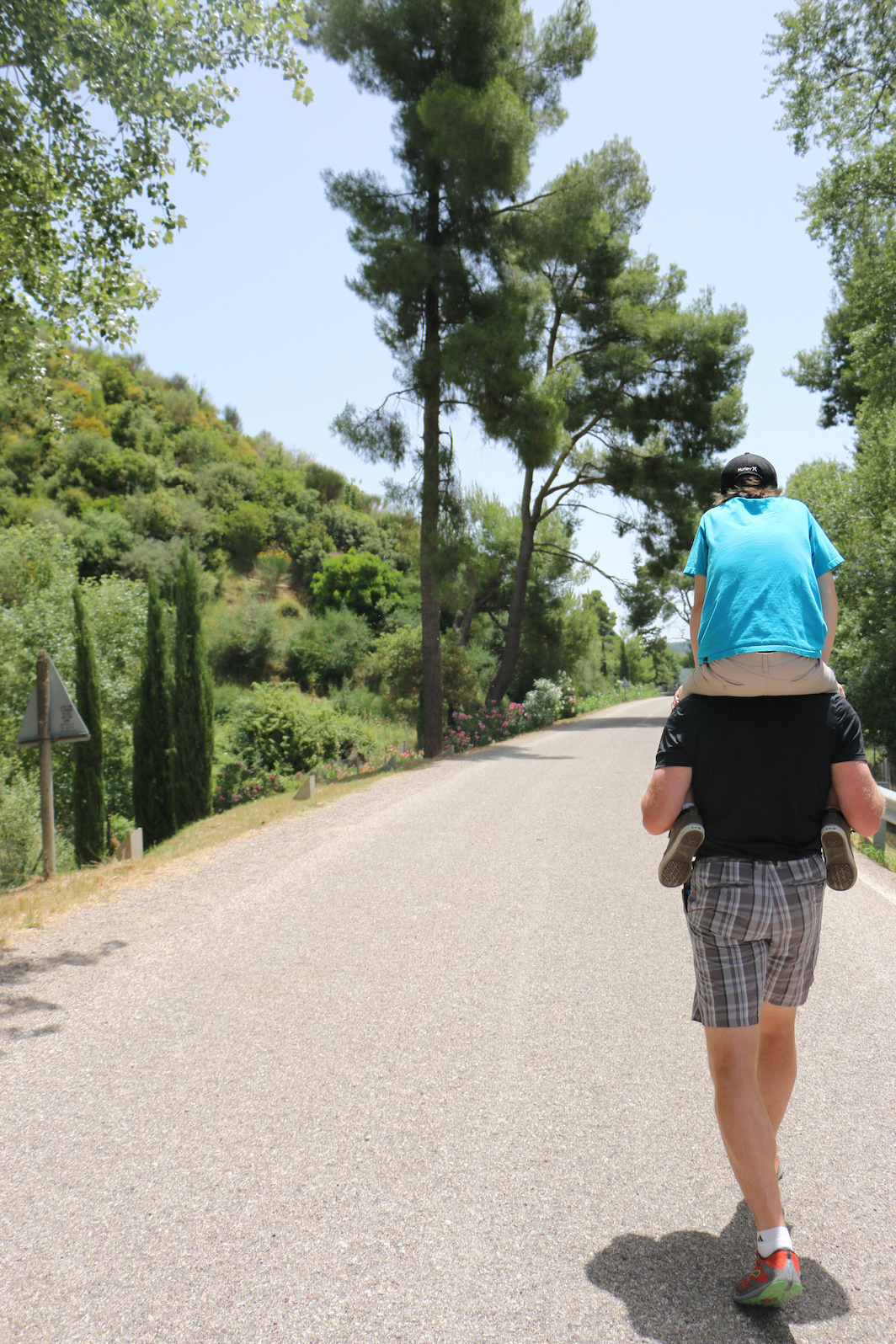 My dad has become my second set of legs

As I transitioned from lower school into high school, I became more involved in my parents foundation, speaking at fundraising events and accompanying my parents to network with the community. 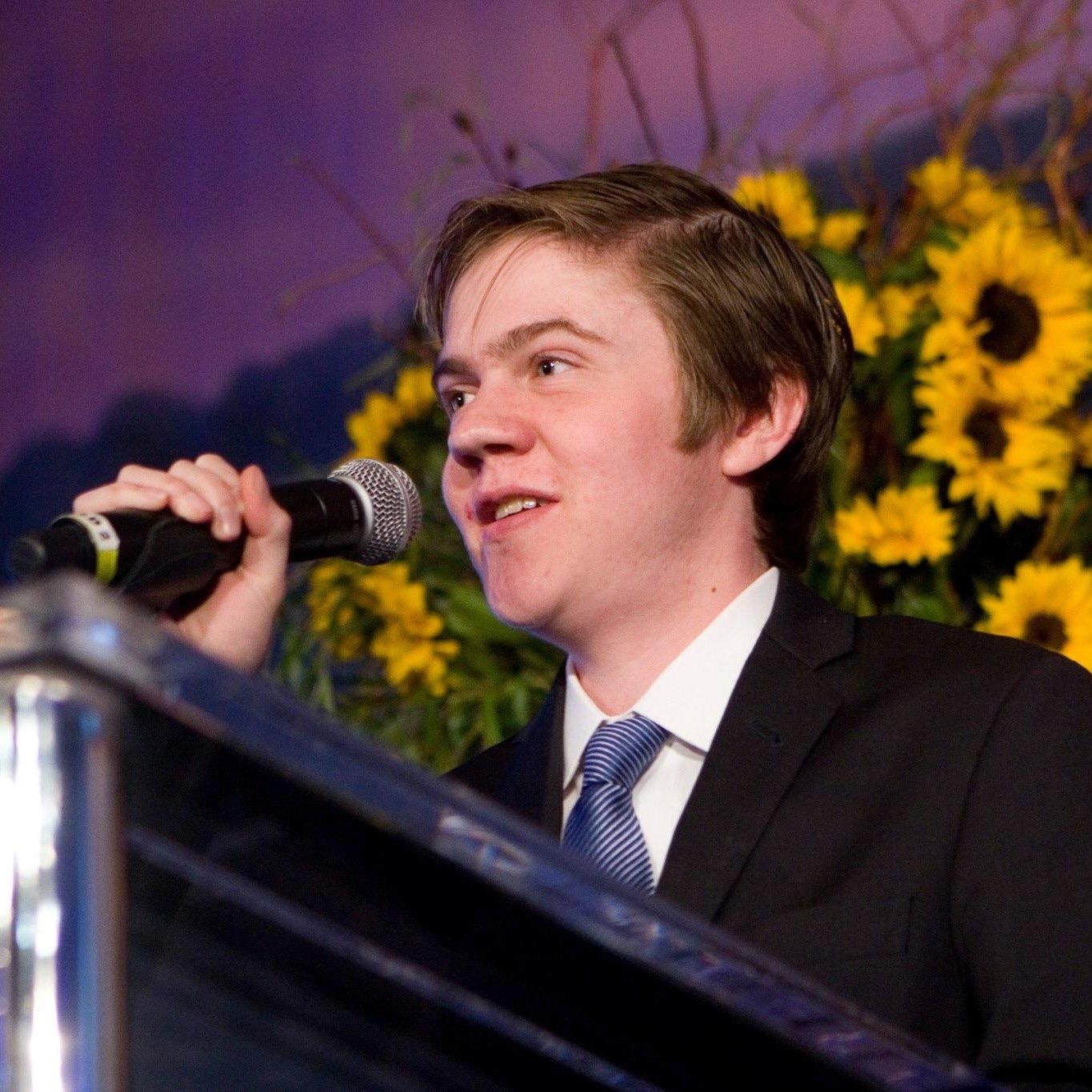 Speaking at the annual gala event for CureDuchenne

High school was both easier and harder. For example,  I was really into football at that time, so I became part of the team as a statistician and a “motivator”. I loved being able to travel with the team – to games and got to know some of the players.

That said, I still felt left out.  Some friends thought I wouldn’t be able to participate in activities that they’d planned. At times I felt like being around them made extra work for them, helping me up and down stairs and the small physical things.

This lead to me being afraid of asking for help – I wanted to be able to do everything else on my own.

My dad was there again to help me through the physical challenges that came with international trips. He carried me through the Ho Chi Minh Mausoleum in Vietnam, they thought my scooter was a safety risk. In Argentina he carried me down the side of a cliff for a waterfall boat ride. 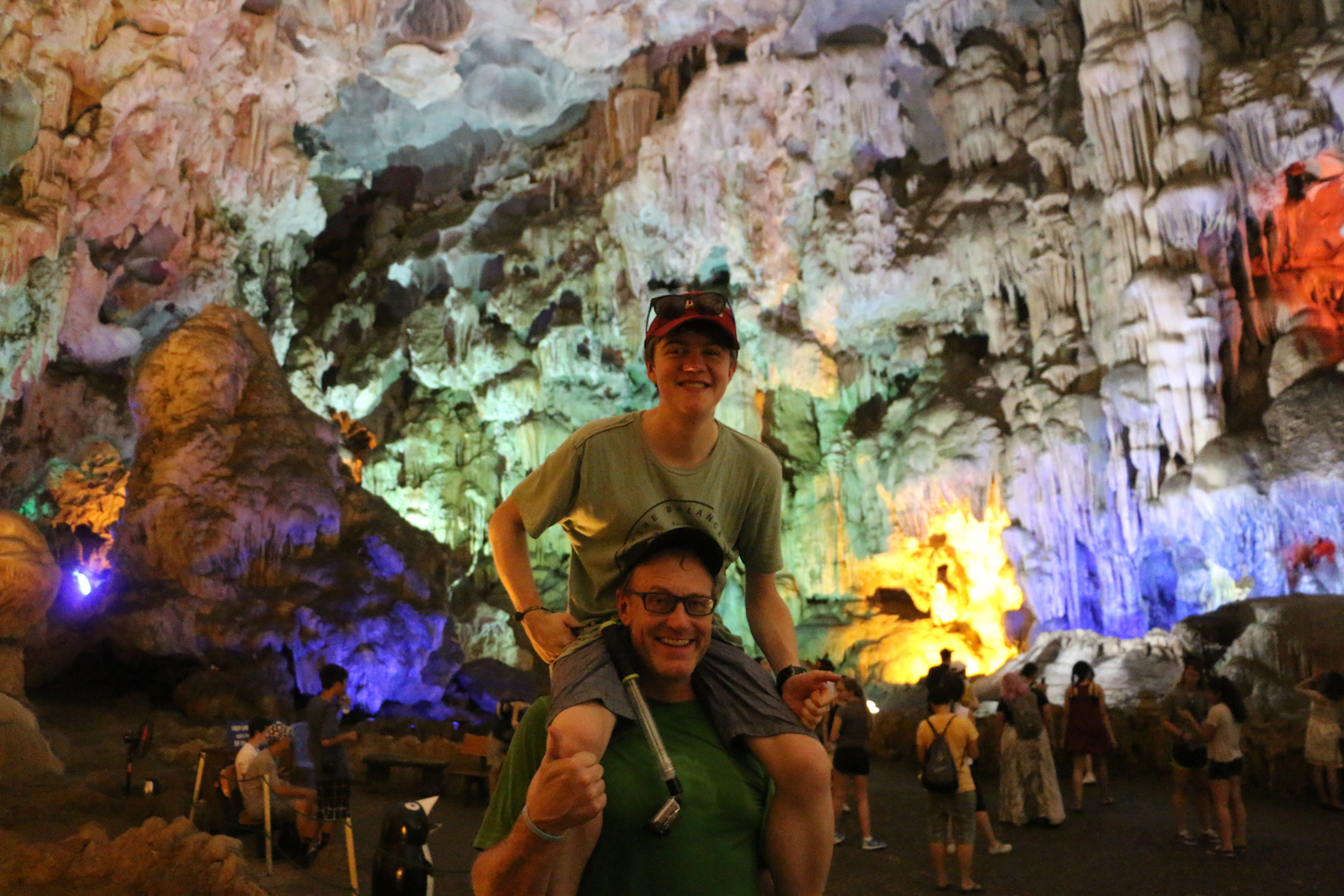 Hiking through a cave in Halong Bay, Vietnam

Since arriving at USC, I’ve had to learn to manage on my own.

When I was living at home my parents were always there. They made sure I took my medicine, took on anything around the house I wasn’t able to do and they stretched me every night, to name a few things. It’s not just one little pill everyday either.

I take around 10-15 pills in the morning, in the afternoon and night. Those range from a steroid that reduces inflammation, which also hampers my growth and maturity (I had to take human growth hormone for a couple of years), multivitamins, supplements that help strengthen muscle cells (some of the same ones you see bodybuilders downing), and general vitamins like D-3.

I’m now in charge of everything. I was able to coordinate with the USC Physical Therapy school to get stretched every day and I’ve been able to find alternatives with day to day exertions, butI have had to constantly remind myself to take my medicine.

USC has done it’s best to accommodate my needs: giving me extra time, the use of a word processor on exams, a room which I can fit my power chair, stretching table and scooter and accessible facilities, but there’s still a lot they can do to retrofit their old buildings to be wheelchair accessible. For example, many of the doors on campus are not accessible via a push plate and some buildings don’t have elevators to every floor.

Balancing all of my work and health has been an additional struggle for me. I need rest and cannot pull all nighters so I am constantly figuring out ways to manage my time better and unfortunately cut social activities that would interfere with the amount of sleep that I need. Even with that, I am doing as much as possible to take advantage of the countless opportunities there are at USC.

I am a part of the Navigators at USC, a Christian club that has a weekly service on campus and has semester retreats. Recently I drove up to the San Bernadino mountains with my friends to spend time in worship and prayer and have fun together. I am writing for the Daily Trojan and I was a Deputy News Editor last year, which I was still able to do with all of the other things I have to worry about. I am also writing for the Tab and working at the Annenberg Media center on Monday and Wednesday. Even though I am completely busy at USC, I wouldn’t have it any other way. 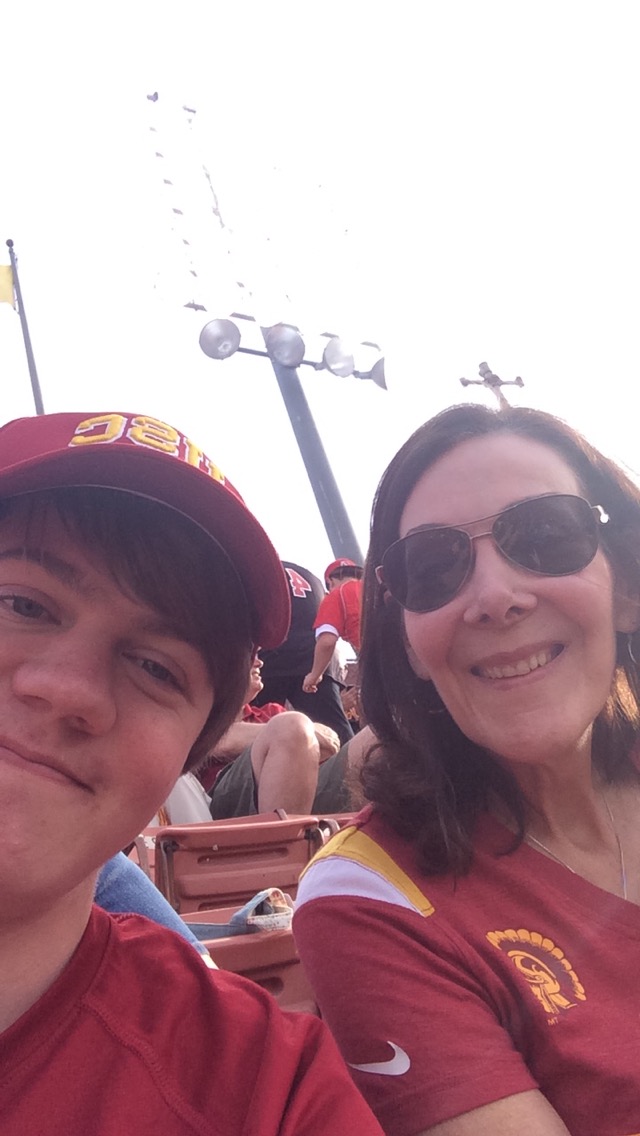 Fighting on with my mom!

Years ago, the future for boys with Duchenne like me was grim. The life expectancy was very low and many were wheelchair bound from an early age. Now, with the approval of a drug called Eteplirsen which treats 13 percent of the population, the odds are stacked in the favor of kids with the disease. 13 percent may not seem like a lot put its approval by the FDA has laid the groundwork for the development of other drugs that can treat different mutations.

Living with Duchenne has given me the chance to participate in groundbreaking biological research. I was poked and prodded and my cells were grown in a petri dish to further research the disease. I made two trips to the Netherlands, the original country of my ancestors, to give my body to science with the hopes that it would accelerate the research in Duchenne. I was almost selected to participate in a research trial in Italy, which unfortunately ended up falling through.  Obviously there were countless other boys and families who sacrificed parts of their lives to jumpstart the research as well and I am also forever grateful for them.

This drug isn’t an outright cure per se either; it won’t reverse the effects of the disease and the only hope is that it will stop the progression. The drug works by skipping over an exon that produces the protein dystrophin so that instead of producing nothing, the cell produces a protein that acts the same way as dystrophin would. That’s one part of the cure because the disease affects all parts of the body.

In order to stop the progression of the disease, scientists must employ medicine that targets each part of the body that the exon skipping drug doesn’t affect  — sort of like a drug cocktail. There’s already been development in stem cell therapy with the heart and there’s bound to be so much more.

With the way science is progressing today nothing is impossible, even curing a disease like mine.