The first open, California Senate seat in 24 years has attracted a slew of characters that make Trump seem banal

For well over two decades, the same two women have served as California’s United State Senators. Senior Senator Dianne Feinstein, who assumed office in 1992 (that’s over three years before I was born), isn’t up for re-election until 2018. However, Senator Barbara Boxer, whose tenure began in 1993, making her the most senior junior senator in office, will not be seeking reelection in the fall. California’s U.S. Senate primary, held on Tuesday, June 7, occurs in tandem with our Presidential primary.

However, per the passing of Proposition 14 in 2010, the rules of our congressional and statewide primaries vastly differ from our Presidential primaries.

Our Senate primary is aptly called a “jungle primary.” 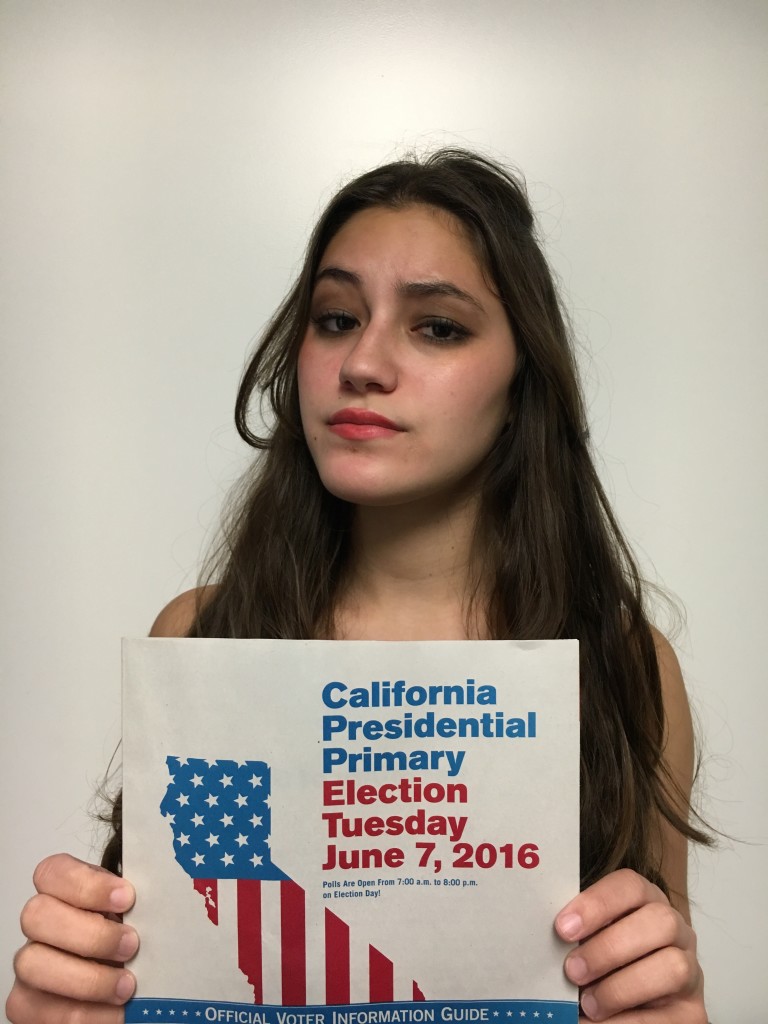 Instead of being divided on party lines, a jungle primary, formally known as a “nonpartisan blanket primary,” pushes the two candidates with the highest number of votes regardless of party affiliation to the final ballot in November. This means that primary candidates get to skip the formalities of courting the party base and jump straight into extremity and, in many, many cases delusion.

So let’s break down our dozens and dozens of candidates into the following.

To say that Kamala Harris is the presumptive nominee is an understatement. She’s been polled as the Senate frontrunner  since just a month after Senator Boxer announced her choice to step down at the end of her term. In fact, a poll ran by USC Dornsife in conjunction with the Los Angeles Times found that Harris, who is the current Attorney General of California, led the pack at 28 per cent, followed by former Los Angeles mayor Antonia Villaraigosa at 19 per cent.

The kicker? Villaraigosa isn’t even running.

Harris fits the entire bill for the California vote. She’s a consistent Bay Area liberal with an impressive, left-of-center professional record devoid of any major scandal. On top of that, she’s the first African and Asian American Attorney General in California history, and she’s already secured the California Democratic Party endorsement. Unless a Leland Yee level scandal is unearthed, it’s safe to say that Kamala Harris will be the next United States Senator for California.

Thanks to gerrymandering, Loretta Sanchez succeded Dana Rohrabacher in representing California’s 46th district, smack-dab in the middle of highly Republican Orange County. Sanchez, who polled at 14 per cent to Harris’s 27 per cent earlier this month, has zero per cent approval from the American Conservative Union despite making some questionably conservative sounding statements regarding Islamic terrorism late last year.

The above are all Republicans with mild political histories. But again, this is California, so if we’re being honest, I’m not going to waste your time talking about regular people who won’t win.

But now we get to move on to insane people who won’t win! You won’t read about them in the news, thank God, but can in your handy Official Voter Information Guide. Or, you can save some brain cells and not, and read my even more handy summary of outlier candidates for representing California in the United States Senate, otherwise known as people with too much money and too much time. 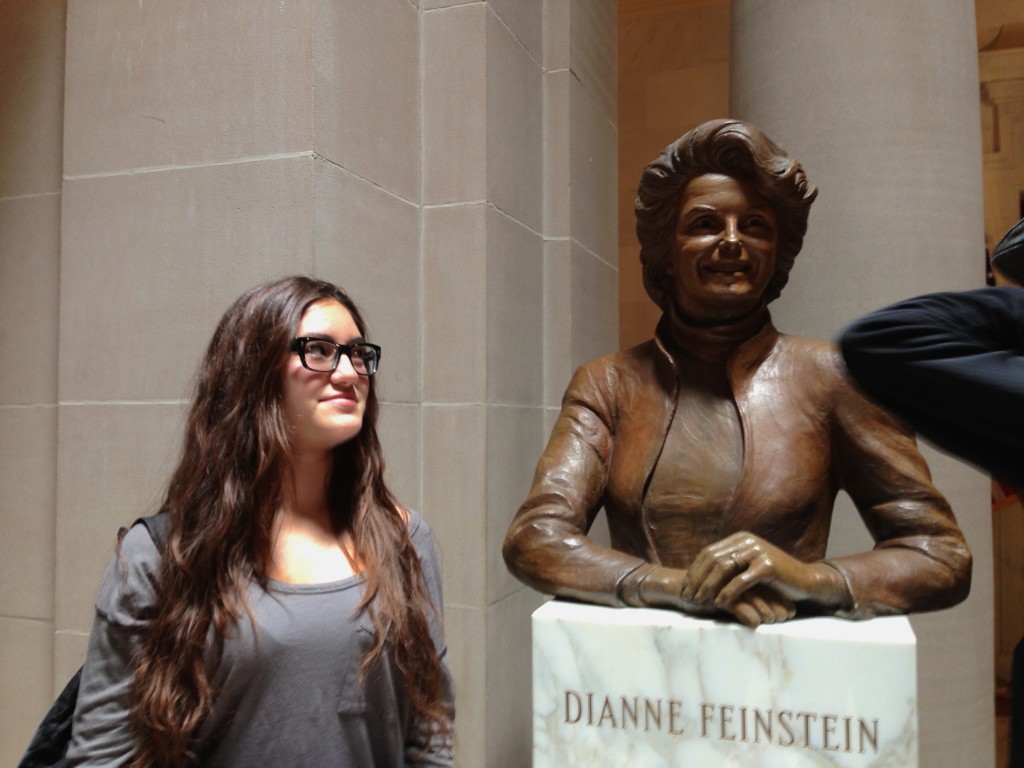 Oh Tiana-begrudgingly-staring-at-a-bust-of-Senator-Dianne-Feinstein-from-four-years-ago, if only you knew how much crazier politics will get

Agbede’s website is AmericaMustRegainItsGreatness2016.com. His platform is “alleviating the suffering of the American citizens,” and his motto is “America must regain it’s greatness again.” Given the amount of times his website laments that America is turning into a “THIRD WORLD COUNTRY,” I think Dr. (yeah, doctor) Agbede might have registered for the wrong party.

The one who will tell you THE TRUTH: Don J. Grundmann (No party) 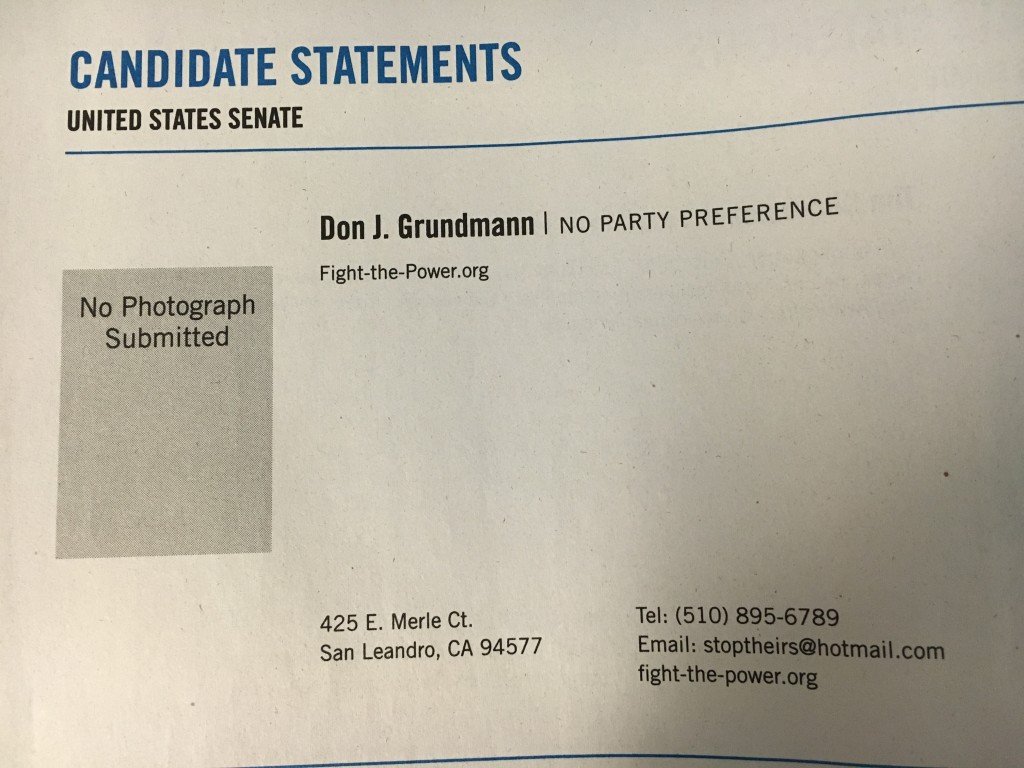 Ironically, right above the statement “All people are equal” on his website, is the clause, “one of the goals of the homosexual movement is to normalize child molestation.” Again, these people are paying money to have a website and be featured in the Voter Information Guide. This is not a joke. California is a joke. Life is joke. Okay, moving on.

The one who doesn’t understand the separation of church and state: Tim Gildersleeve (no party)

Gildersleeve is a follower of “the living and resurrected King Jesus Christ.” According to his website, he would be a Democrat if not for a seeming “hostil[ity] to Christendom.” His website lists no issues that potential Senator Gildersleeve would tackle, but he does remind us all that we are engaged in a “cosmic battle” of good versus evil. Cool! 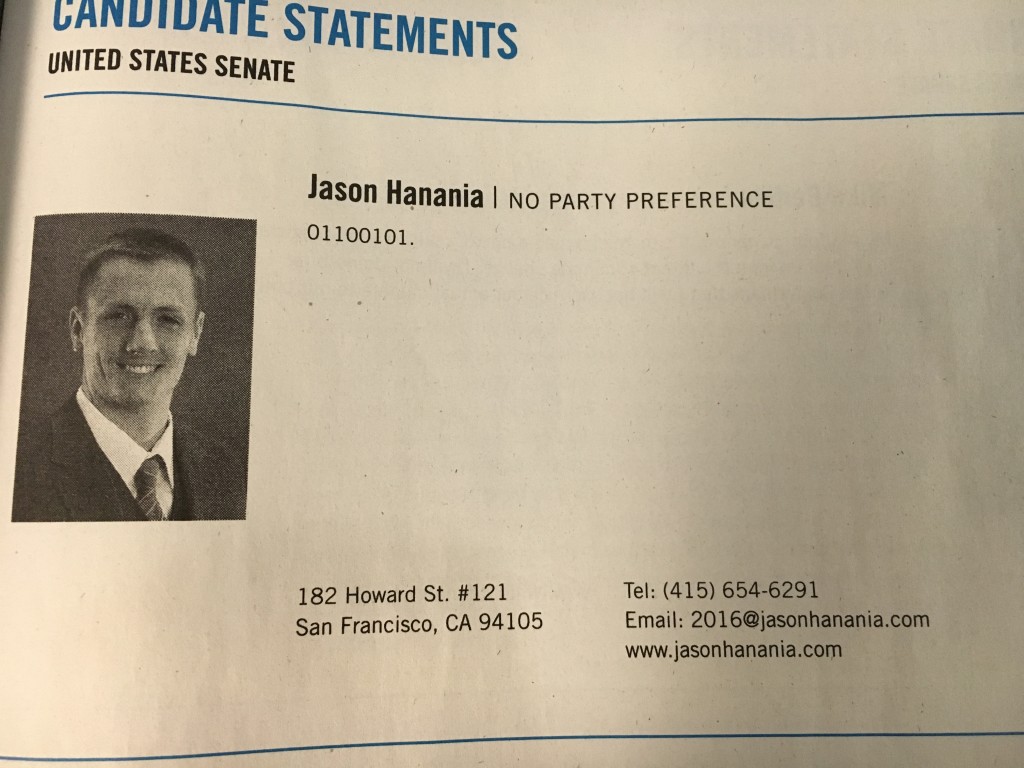 Anyone who’s taken a single introductory computer science or stats course knows that this is binary for “e.” Aside from doing this to show how much of an engineer he is (again, I learned how to read binary in a two unit, introductory ITP class), Hanania spent actual money on 9 characters because, he says on his website, “the novelty of binary code may also have motivated you to visit my website.” Sigh. Next.

When I say Peters is a Jacksonian Democrat, I mean he must be the only person other than Ben Carson who is mad that legendary, gun-toting hero Harriet Tubman is replacing a genocidal former President on the $20 bill. Peters’ entire platform is built around policy’s America had well over a century ago. Manifest Destiny? Check. Zero income tax? You bet. No deficit? Of course! Check out his website to read some hilariously bad economics about fiat money and the labor market.