While Quick doesn’t provide many numbers, with a closer look they are quite telling

The memorandum, which spans six pages in PDF form, provides a number of details which might explain the $1,978 tuition increase for the 2016-2017 school year. 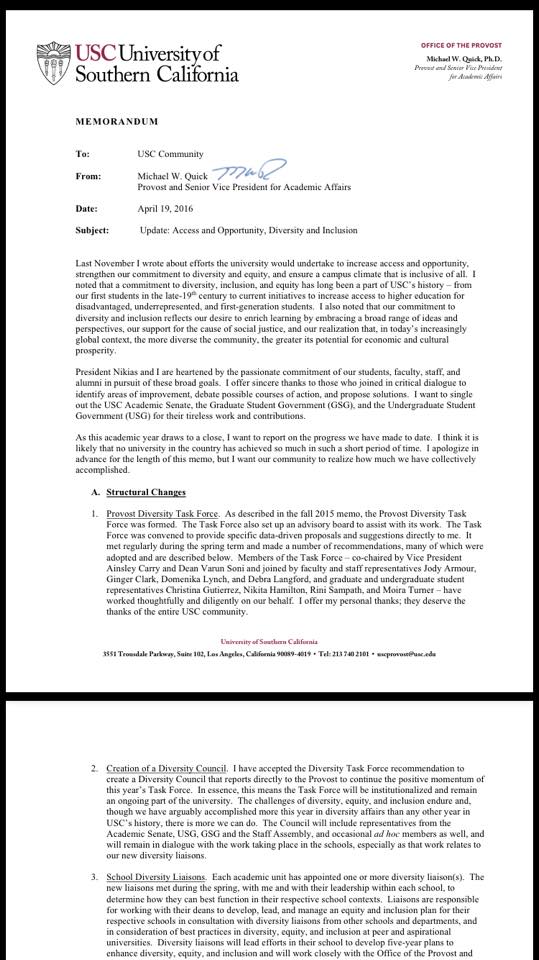 The first portions of the Memorandum detail structural changes, diversity related changes to USC’s general education program and the Strategic Planning Committee, a new diversity website and a regular schedule of open campus meetings. These plans likely will not incur many costs to the school. In fact, many of these points, such as the expansion of the description of the Global Perspectives GE requirement, involve no money at all. However, the explicated dollars begin to add up in the second half of the memorandum.

In Section D, subsection 13, Quick explains that USC increased the number of Postdoctoral Fellows from Mexico’s National Council of Science and Technology (CONACYT) from 11 to 30.

Quick also notes that USC’s four cultural centers received increased funding this year, and a long-term strategic plan to develop future cultural centers in in the works. Quick does not specify the amount of funding increased.

By contrast, the Undergraduate Student Government did not pass a similar resolution.

Quick also detailed a number of other events focusing on diversity and inclusion which were funded by the Office of the Provost and other USC schools, as well as a number of scholarships and grants secured by the university for scholarships for African-American, Latino and Neighborhood Academic Initiative students.

While the total number of detailed donations ($20 million) and grants ($4.8 million per year for the next five years) for scholarship purposes are vast, they establish their own quotas and seemingly will not fund the other initiatives and programs detailed above.

Both these costs and funding do not include the $80 million which USC previously allocated to “resources supporting diversity efforts at USC and in the community.”

What does all of this mean?