What your Duke game viewing location says about you

Hopefully, you’re a senior. Nothing would piss me off more than when my friends through freshman and junior year randomly got tickets without declaring senior status. However, you could also be a die hard fan who skipped at least two days of classes and have not showered in quite a bit. You all are the luckiest ones on the Hill and will likely need to buy some throat lozenges from all the screaming that will ensue.

You may not have gotten tickets to the game, but you’re on top of your shit. Tickets to watch the game at the Varsity Theater come out about a week before the game for the solid price of $5 in the Pit and $7 at the door. You’ve probably tried to get these tickets in past years but realized how fast they sell out. Either that or you are forgetful and have an extremely organized friend.

You must have some sort of hellish professor (probably some sort of STEM subject — let's be real). I suppose there is a chance you MUST study for something that is more fulfilling and exciting than the most intense and thrilling game of the year. But yeah, you probably have a 4.0 and I doubt that’s going anywhere.

Get ready to Clorox those white converses! This night is the highlight of the season, but it is also one of those that people may not remember. On your way, I’m sure you stopped by Sup Dogs to take a picture with their epic banner. You’re probably under 21 and want to enjoy the available free beer. Just stick with your friends and stay safe! 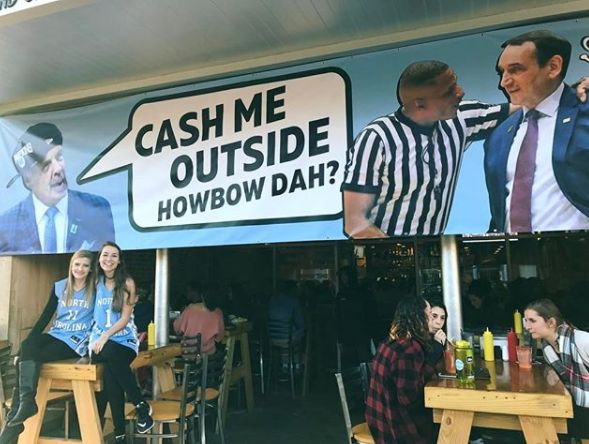 Whoever you are, I respect you. I’m sure you did you’re best to get out of this but got stuck since no one else will take your shift OR you knew you would make mad cash working the night that no one else wants to work. You got money on your mind and there’s no way to hate on that.

An apartment is definitely a solid location. You don’t want to spend a lot of money at a restaurant or be stuck in a big crowd at a party. My guess is that you probably want to smoke in the privacy of the apartment and chill out while we destroy those dumbass dookies.

Similar to the kids at the Dean Dome, y'all probably are in need of a shower. You had to camp out for your spot in the restaurant and it was well deserved. You crave high energy environments and will probably be a little hungover (and broke) tomorrow. But hey — you’re a classic Tar Heel. On that note, I’m sure you’re a Business or Bio major.

Damn, you sure are desperate. Your procrastination got the best of you and you are stuck at the most unusual location to watch the most energetic game of the year. But hey, you still care enough to be on Franklin. I’m sure you’ll get teased for watching the game at a bagel shop, but you’ll probably have to run less than them.

You're a real hipster. Such a hipster that you probably have an overpriced vintage tee from Rumors on right now. I'm sure you'll buy a few overpriced PBR's while you watch the game. You probably deny how much you care about Carolina basketball, but deep deep down, you realize Roy Williams took a part of your soul when you chose to come to UNC.

Yeah, you really couldn’t give a shit.