Shoutout to dook for that A+ education, right?

Kyrie Irving believes that the Earth is flat.

No, this is not a joke – April Fools is well over a month away. Kyrie Irving genuinely thinks that the Earth isn’t a sphere. Irving appeared on the “Road Trippin'” podcast with teammates Richard Jefferson and Channing Frye, and during their discussion of conspiracy theories he admitted that he thinks the Earth is flat.

This is probably one of the dumbest conspiracy theories out there to believe. There’s plenty of scientific proof that the Earth is, in fact, a sphere. Scientists out there are probably sobbing. Bill Nye came out and said he found Irving’s claim to be ‘heartbreaking’.

But seriously, you believe this Kyrie? You play basketball, a sport that uses a spherical object to score points, but you don’t think the planet you live on has a similar shape to that same ball? Come on man, do better. This is embarrassing. I, a Tar Heel, am embarrassed for you. Is this really what a quality education from dook looks like? Dook is out here producing scholars that think the Earth is flat? SCARY. 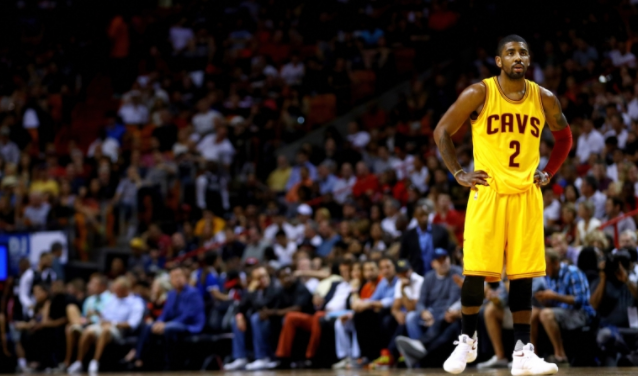 I mean, maybe we shouldn’t be surprised that this comment was made, seeing that dook thinks blue devils are somehow appealing. But the whole “Earth is flat” theory was dispelled hundreds of years ago thanks to a beautiful thing called science.

This just proves to me that our academic “scandal” is not something people can target us for. I don’t want to hear another dook or State fan try and come at our athletes for not going to class or not doing work because Irving’s statement has got to be one of the dumbest things ever said and he went to fucking dook.

So please, save your jab and remind yourselves that your basketball fave thinks the Earth is flat. GTHD.