Let me go ahead and tell you the best part now: yes, I did shake Bill Clinton’s hand and no, I never wanted to let go.

Bill Clinton came to speak and endorse Hillary on Tuesday in Durham, NC and not only was the crowd and atmosphere positive, so was he.

There was so much anticipation in the lead up to him taking the stage. Local officials each sang their praise for Hillary as well as the importance for North Carolina to vote for her in the upcoming election.

After many long pauses and false alarms, Bill finally took the stage. After making some small remarks on how nice it was to be there and how old he is getting (recently 70, aka an official old timer), he got straight into business.

He devoted very little time to Donald Trump, but the times he did, it seemed to be a response to recent criticisms towards Hillary. Also addressing “Make America Great Again,” Bill only had to say: “We need to live in the future, not the past,” as in this is the best America has ever been thanks to Obama (thanks, Obama – as I believe the kids today say it).

Bill also spent a lot of time talking about student debt and loans, which, as a college student, definitely piqued my interest.

He said: “Our greatest asset…is our youth and diversity.” Hillary’s policies include changing the laws to allow refinancing of college loans and making college more affordable – as in making tuition free for those with less than $125,000 annual income and go to a public college, HBCU or school with large populations of low income students with high graduation rates.

The majority of Bill’s time was, other than to hype up Hillary, spent saying what she would do, whether it’s getting Internet access into more homes or cleaner water systems. 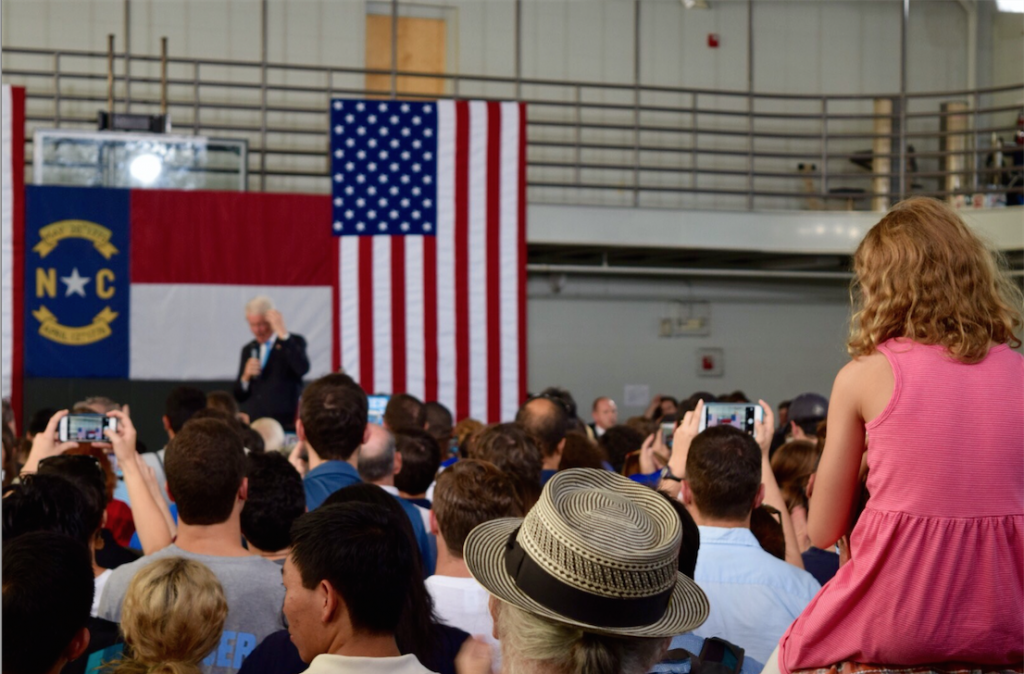 In his closing arguments, which, towards a crowd of devoted supporters, didn’t need to be much of an argument, Bill gave points as to why people should vote for Hillary, with his most substantial piece being that she is one of the only people to have gotten things done in government with both sides of the House.

Every inspirational statement was met with a roar of applause and even more enthusiastic sign waving.

As his speech ended, people began heading for the exits, but then I noticed he was shaking hands. The rush was on and soon the front of the small gym felt like a rock concert. Eventually, I squeezed my way to the front and, yes, shook his hand.

Bill seemed to have a large effect on the crowd, who seemed more motivated and inspired than ever.

Teig, a student at Duke told me: “Well, I was honestly very impressed at what a good speaker he was. I liked the way that he was able to speak to us colloquially and it didn’t feel like it was forced.

“For me, with Hillary, the thing I always noticed is that he never has anything negative to say…it’s always sweet and really genuine.”