‘Whoever did this really hurt me’: Artist Michael Brown speaks about his vandalized mural

‘It’s a really big, open-hearted thing, and then this happens’

On Thursday, the Parade of Humanity mural on the Carolina Coffee Shop wall was vandalized with the word “TRUMP” in bright yellow spray-paint. The black and white mural is an icon of downtown Chapel Hill, so word spread quickly throughout campus and on social media.

By mid-morning, most of UNC knew about the incident. Except for one important person – the mural’s artist, Michael Brown. He didn’t know his mural, which he painted in 1997, had been graffitied until noon when he looked down at his phone.

“One phone call is all it takes, and my day has been anything but normal.”

Once he heard the news of the vandalism, the 61-year-old muralist made his way to Franklin Street to see the damage in person. 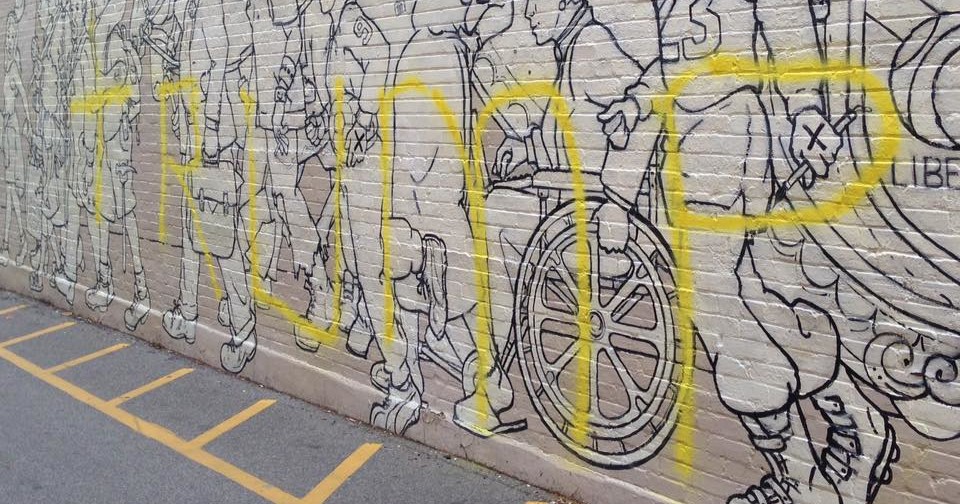 Brown said he had no idea who would spray paint over one of his murals, but said the police are aware there have been problems in the area.

“Here’s what I think: I think some 19-year-old got so drunk in the bar last night that he imagined Donald Trump was a viable candidate for president. I don’t think it was a very highly evolved person. But other than that, I don’t have a guess.”

A UNC graduate and self-proclaimed “UNC guy,” Brown was raised in Chapel Hill. He said the the Parade of Humanity mural is representative of Tar Heels across the state.

“The mural – everybody loves it. I mean, everybody in town loves that thing. I get asked to come give talks in groups to tell elementary schools all about it, and it’s a really big open-hearted thing. And then this happens.”

Brown said he plans on removing the graffiti as soon as possible, for fear of something like this happening again.

Brown has painted murals across North Carolina, Virginia, West Virginia, New York, Florida, Chicago and Baltimore, but he is perhaps most well known for his artwork right here in Chapel Hill. He said his Sea Turtles mural in the PNC Bank parking lot – known as the “Turtle Lot” to UNC students – is one of his favorites.

“I restored it six years ago. I must have painted it 22 or 23 years ago, I think. If you just do and do and do for your whole life, you kind of forget which mural you painted when.”

“Now I get to dress in dirty, old raggedy clothes and take a scrub brush and a wire brush and work like a $7.25-an-hour laborer for a day. And that’s OK. At my age, I need the exercise. I’m 61 years old, and I’m still hip. I’m still cool. Yeah, I’m groovy.”