Running for Razan: Speaking with Yousef Abu-Salha, brother of Our Three Winners

Yousef Abu-Salha is a first year medical student at UNC. He lives in Chapel Hill, goes to class, hangs out on the quad – by all accounts, he’s your average 24-year-old at Carolina.

But a little over a year ago, Yousef experienced a horrible tragedy that rocked the community. His two younger sisters, Razan, 19, and Yusor, 21, and brother-in-law Deah, 23, were victims of the Chapel Hill shooting on February 10, 2015. Yusor and Deah were married just weeks before they were killed in their homes.

Now, Yousef is living for the trio – they are known as Our Three Winners – and he is continuing their legacy by running the Tar Heel Ten Miler in Razan’s honor. The April 23rd race is an annual marathon running through the Chapel Hill area.

Yousef sat down with The Tab to talk about some of his favorite memories with his sisters, what it’s like training for the race and his incredible philanthropy, PCRF, which raises money for medical relief in Palestine and other populations in need. 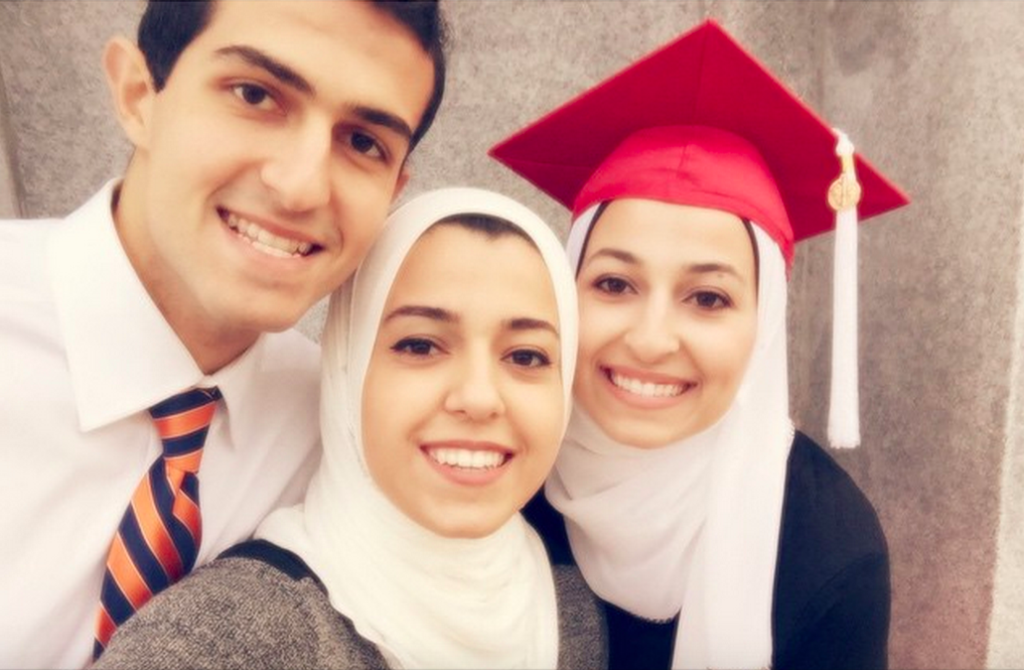 Have you always wanted to be a doctor?

No, I decided pretty late in my undergraduate career. But I was always thinking of doing something health related.

So, now you’re a runner – how many marathons have you run before?

I’ve never run a marathon before. I used to just run causally to stay in shape. I would do three mile runs. I liked to play basketball more. Razan, my youngest sister, was the runner in my family. Even she picked it up not too long before she passed.

She had probably only been running for a year or two, but I know she loved it. She had really high goals – she had run a 5K and a 10K and had her eye set on a half marathon.

When did you begin running in honor of Razan?

Her and I, we used to run together. There’s a trail near where my family lives in Raleigh called Lake Johnson – it’s beautiful. I’ve been running it since I was in high school. Razan and I used to run it, my sister Yusor joined with us too.

When the tragedy happened last February, I came home from Antigua where I studied. Everyone was in a state of shock and sadness and disbelief. Razan’s best friend, who was training with Razan for the Rock ‘n’ Roll Half Marathon of April 2015, brought up the idea that we should run the race in Razan’s honor.

I thought it was a great idea and that we could get a lot of people to do it. I said: “Sure, let’s go for it.” It ended up being a really great experience, especially during an unimaginably rough time. 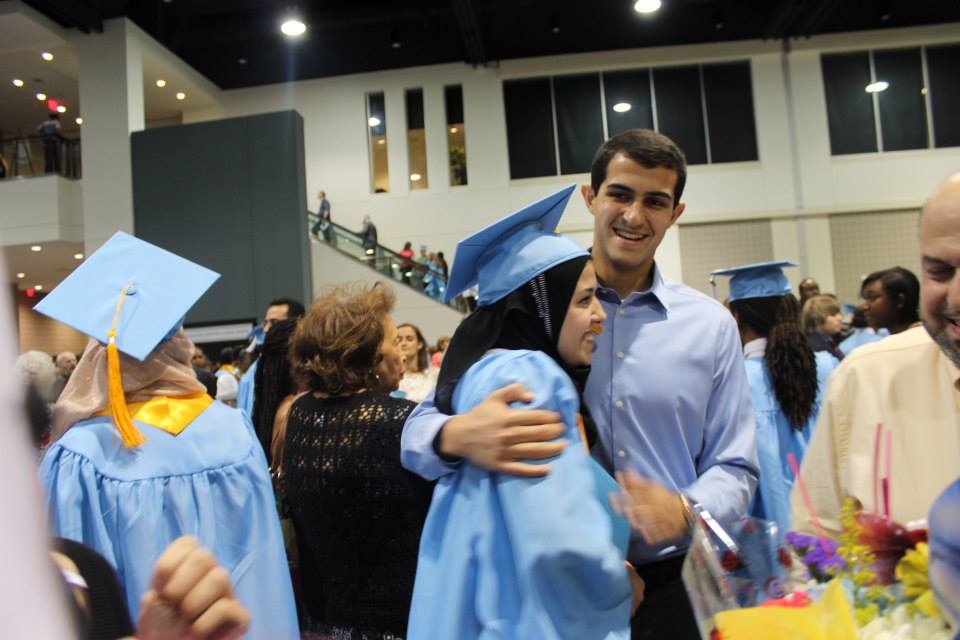 How are you feeling about the Tar Heel Ten Miler?

I’ve run with them before in the Bull City 5-miler in October. They get people to run these races and you fundraise while training. So you sign up for the race and create a team – like we’re team PCRF – and we create fundraising pages telling people to support us. We want to raise money for this really underprivileged population in Palestine. And we found it was a really positive way to raise money.

It’s not annoying people like: “hey, give me a few bucks for this or that.” People really like that we are working hard and so they want to help us. It’s healthy physically and for me, it changed my life. Running was my – I wouldn’t say it was my escape, but my therapy.

I would go out there and train at Lake Johnson and I could remember us just running a few months ago. It kept me going. She kept me going. I even dreamt of her the night before the half marathon in April. It was really special. Training hard and working hard, I really proved something to myself. I was able to take that negative emotion and make something positive of it.

It was during a time when I honestly didn’t think I would ever be happy again. So working hard and showing up, running and accomplishing something you care about for someone you love so dearly, really proves a lot to you. It kept me grounded and levelheaded, and made me feel good, to say the least. 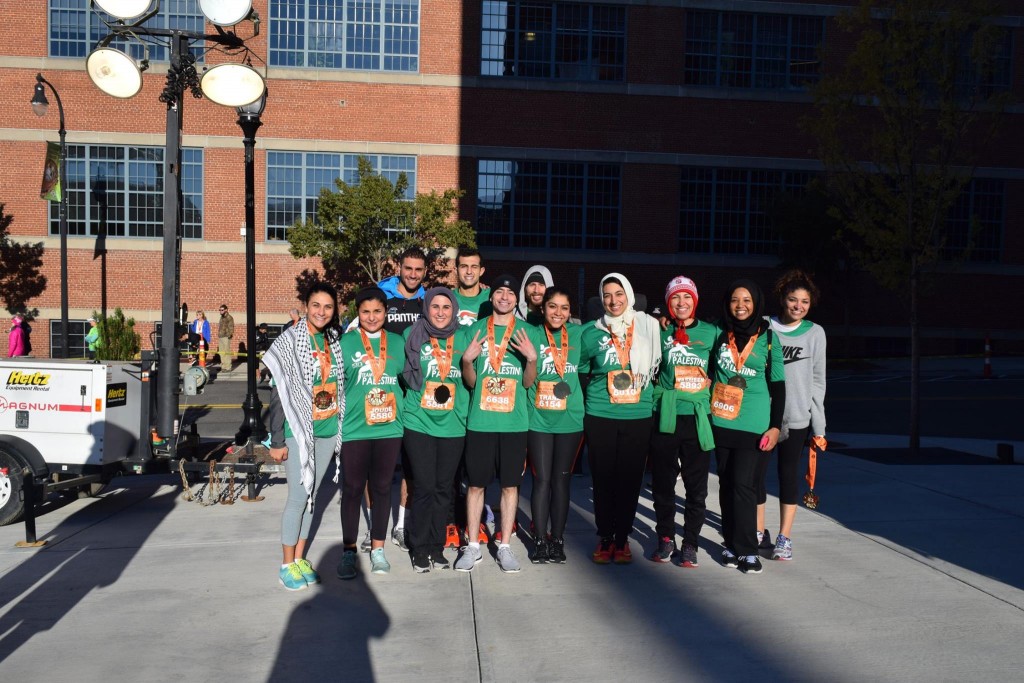 What is your favorite memory of Razan and Yusor?

There’s too many. I could tell you some of our most recent memories. In December 2014, we were just celebrating the whole winter break. Yusor had just gotten married to my best friend, Deah. She graduated from college that December and had gotten into dental school. It was a dream come true. The wedding was a great time. I remember intimate moments with them.

One day in early February 2015, just a week before their murders, I was running errands before I had to return to the Caribbean, where I was studying. I needed to get a haircut and buy some stuff form Target. I asked Razan if she wanted to come with me and she was really excited to do so which makes me cherish her so much. She just loved spending time with me and I loved spending time with her.

She came with me and you would think she would’ve been bored but she really wanted to. After we finished the errands, I recall that for some reason, she wanted to get a smoothie really bad. The smoothie place she craved wasn’t anywhere near where we were.

It was 6pm and my mom was telling us to get home for dinner, but I was like: “no, we’re going to get you this smoothie.” I remember we were just playing throwback music and jamming out. It was a great time. I look back on it and there was no reason to go and get a smoothie, but I’m so glad we did. We have too many memories together, I don’t know if I have a favorite. They’re all my favorite. 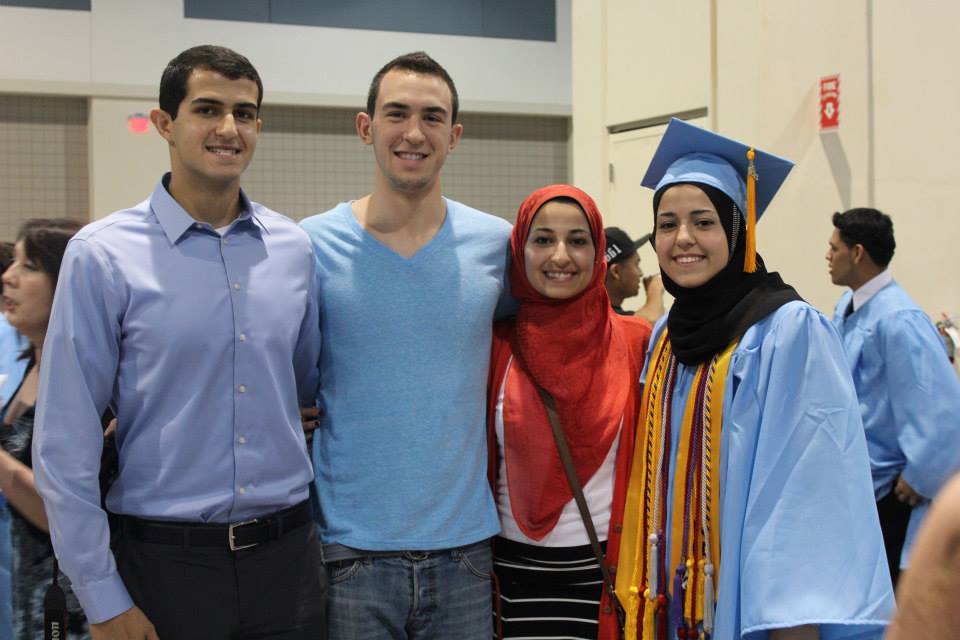 Based on the current political climate, do you feel it’s been hard for Muslim Americans in the U.S.?

It depends what you mean by “hard.” I’ve been here since I was two years old and I’ve lived in rural North Carolina for a couple of years before moving to the Triangle. I did feel a little different growing up. This was before 9/11, but it wasn’t because of my faith. Maybe because I looked different, my skin color or maybe it was just my name. You know Yousef Mohammed Abu-Salha isn’t a typical name in Clinton, North Carolina.

But I never felt hated or disliked – it wasn’t apparent to me. After 9/11, the climate started to pick up. I went to an Islamic school in Raleigh and after everything happened, they shut down for a week or two because they were getting threats. Women who wore the hijab stayed at home because they didn’t feel safe. Things seemed to clear up, but I’ll tell you that Muslim Americans still feel marginalized. We do watch the news and see how a lot of media channels only show the negatives.

They only show that small radical minority over and over and over agin. They make up less than 0.05 percent of Muslims. It’s not fair to keep showing them and keep using words like “radical Islam” and “Islamists.” That’s not who we are. You don’t have to make us sound so evil. People grouped us and talked about us without researching us, talking to us and knowing us.

The bottom line is we have always felt that negative sentiment. I never would’ve imagined in my wildest dreams that it would manifest in a hate crime so close to me. Never. And we’re seeing more and more of this. The FBI has even documented that hate crimes towards Muslims are on the rise. It’s tragic.

Our tragedy hasn’t even been deemed a hate crime federally because a hate crime is so hard to prosecute. North Carolina doesn’t actually have a hate crime law for felonies. There’s a lot of Islamophobia and a lot of hate. We might be a little sheltered from it here going to school at UNC. It’s a really liberal, progressive area with open-minded people. But it’s there.

You can just look at who’s voting for who to see how people feel all over the U.S.A. Regardless, my family and I believe that the whole world knows that the Chapel Hill shooting was indeed a hate crime.

For more information about Yousef’s charity and to donate to PCRF, visit his page.