What you missed at UNC last week

First semester is almost over – cue the seniors lapsing into major depression. From Jock Jams to the 50 demands made by some of your peers, we’ve got the full recap of last week for you.

Here’s what you may have missed last week.

Chillin’ out over break… literally

Get ready to start bundling up, Tar Heels, because the cool temperatures are finally upon us. With lows in the 30s this week, it’s finally time to stash away the wind breakers and dig up the puffer jackets.

P.S. check out that forecast for the Monday after break. Our Thanksgiving prayers go out to all the 8am Heels. 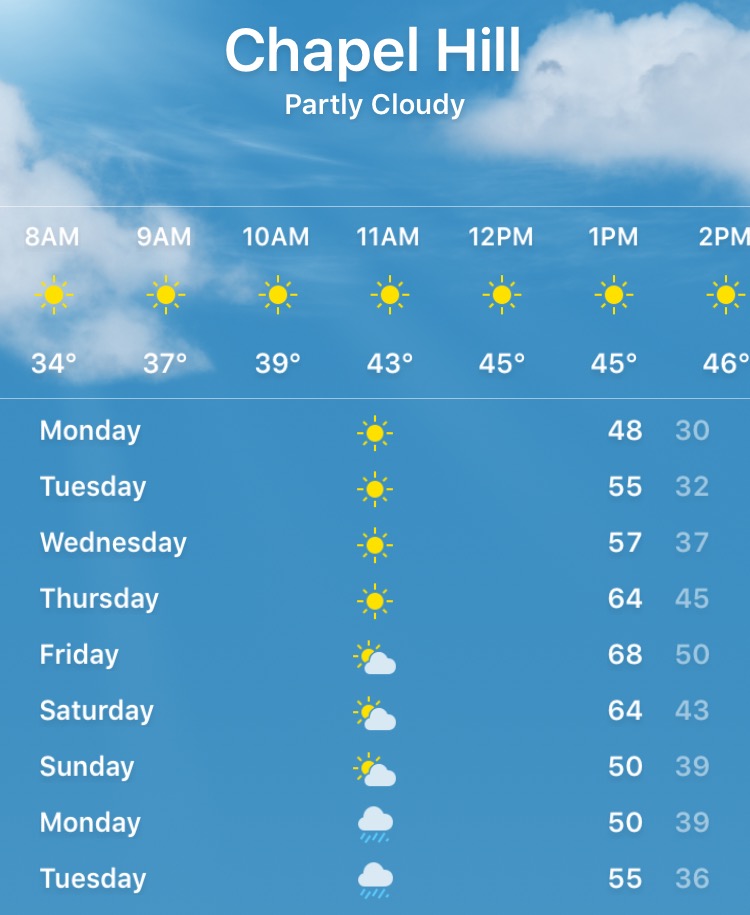 UNC football clinched the win against Virginia Tech in overtime, 30-27. Not only did this win get them the ACC Coastal Division Title, they also secured their spot in the ACC Championship game against Clemson on Dec. 5.

Quinshad Davis, we love you. 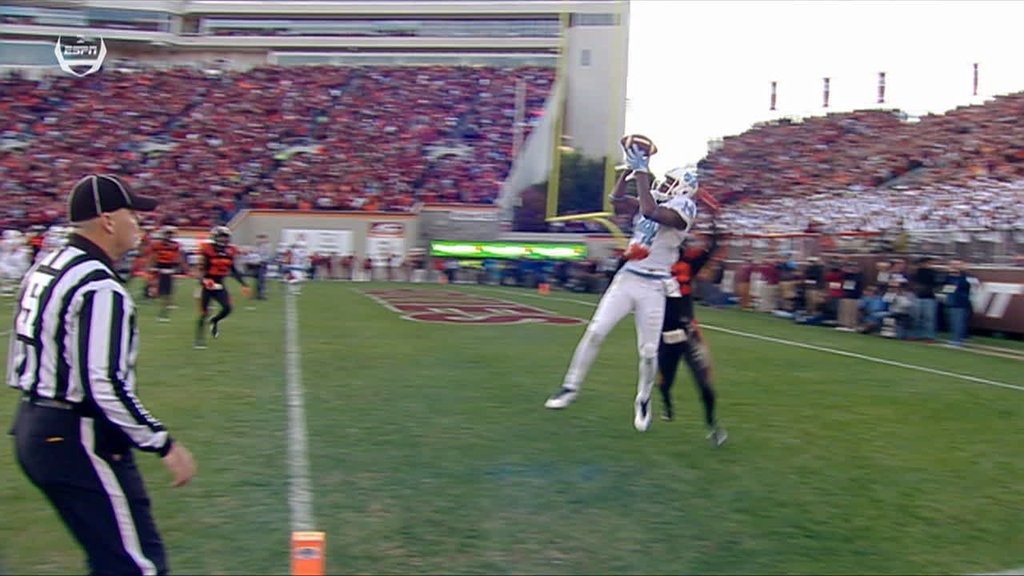 Unfortunately, UNC basketball didn’t have as great of a Saturday, taking the loss to Northern Iowa, 67-71. Between the overtime suspense of the football game and the upset by UNI, it’s safe to say Saturday wasn’t the most relaxing day for Tar Heel sports. 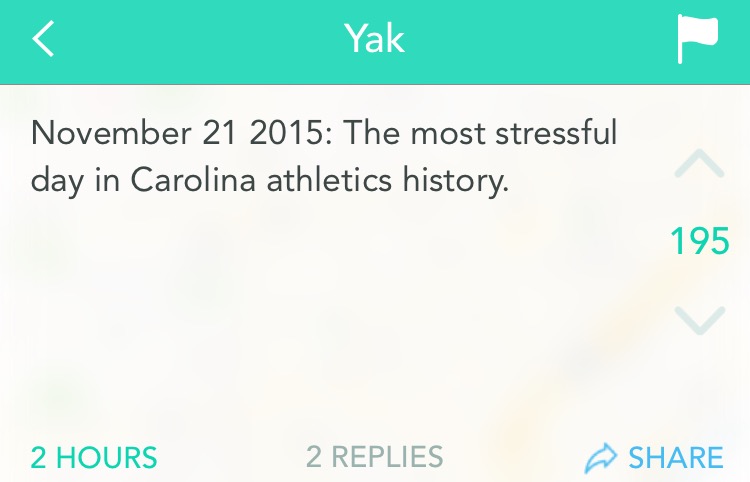 Dog of the week

Everybody meet Ace, the beloved puppy of UNC sophomore Ross Weiser. Between roaming the halls of PDT, where he lives, to being non-stop coddled by college girls, it’s pretty clear this German Shepherd/Huskie/beagle mix is living the dream. 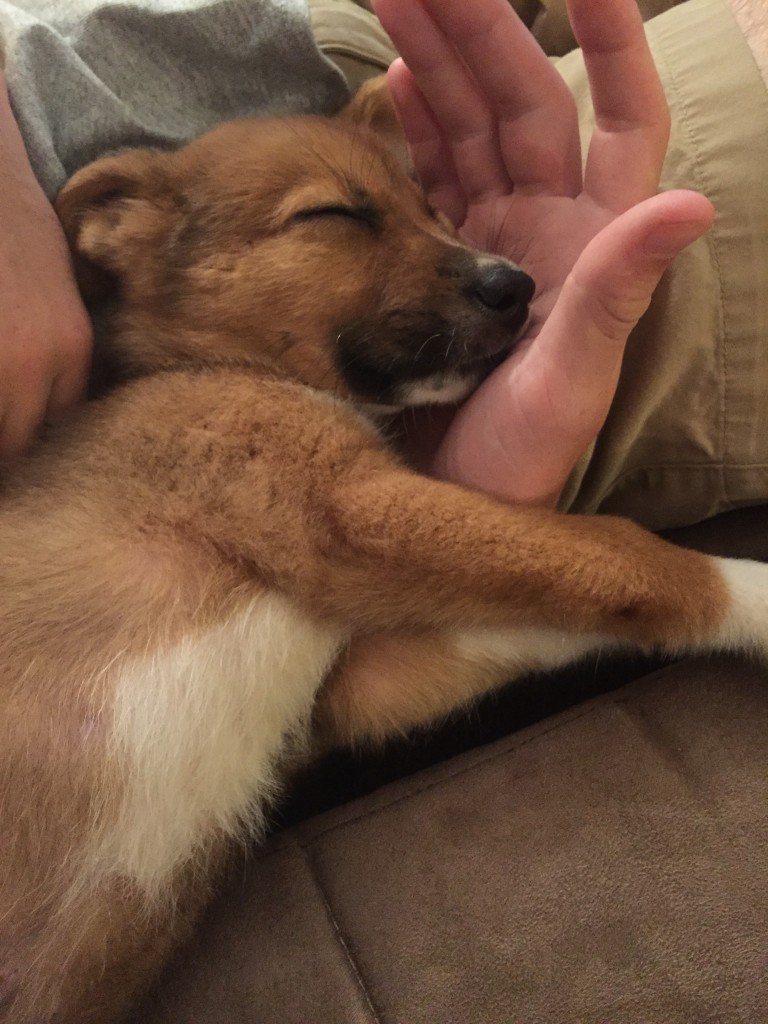 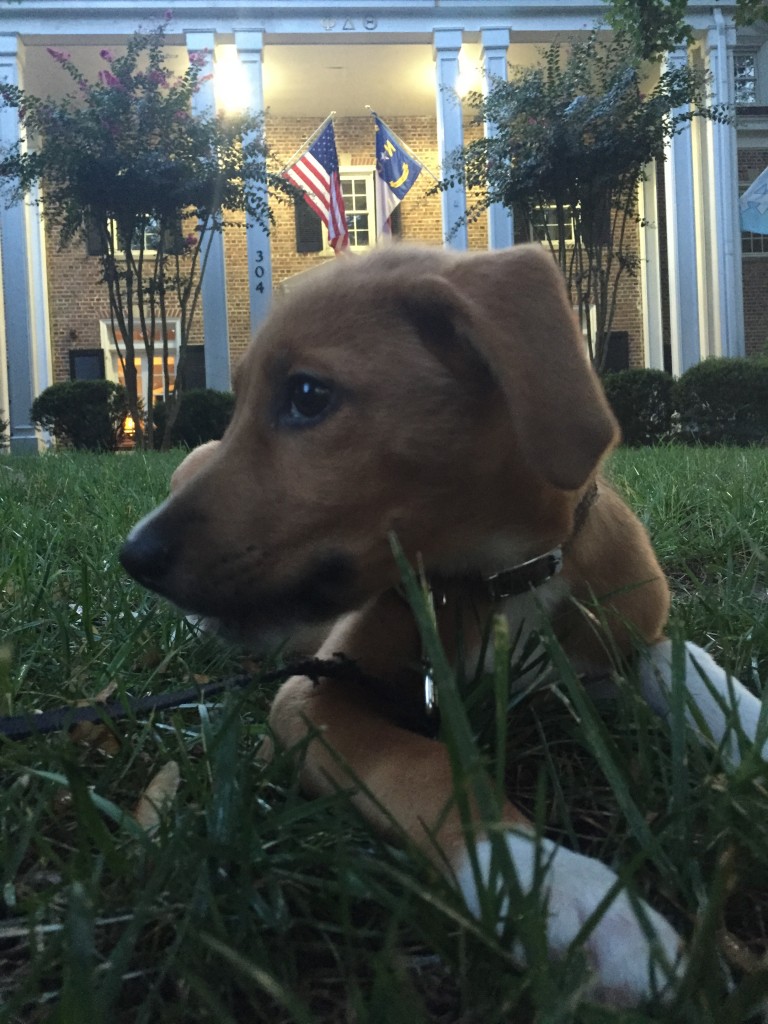 Let’s get ready to rumble

Saturday night marked the highly-anticipated annual Jock Jams party hosted by Phi Delta Theta. Attendees were jam packed on the dance floor as the DJ kept the music flowing for the estimated 800 guests. Both Chi Phi and Delta Kappa Epsilon followed it up with late night parties, which made for a very lazy Sunday (still in our jerseys) as we sat on our couches watching the Panthers crush the Redskins. 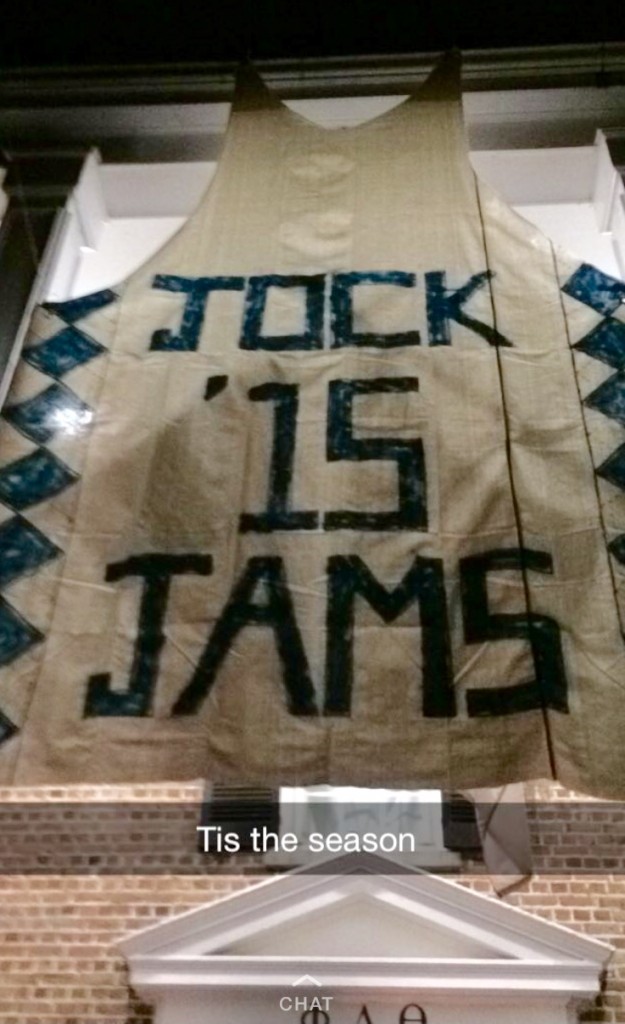 Even Ace was blessed with a wristband. 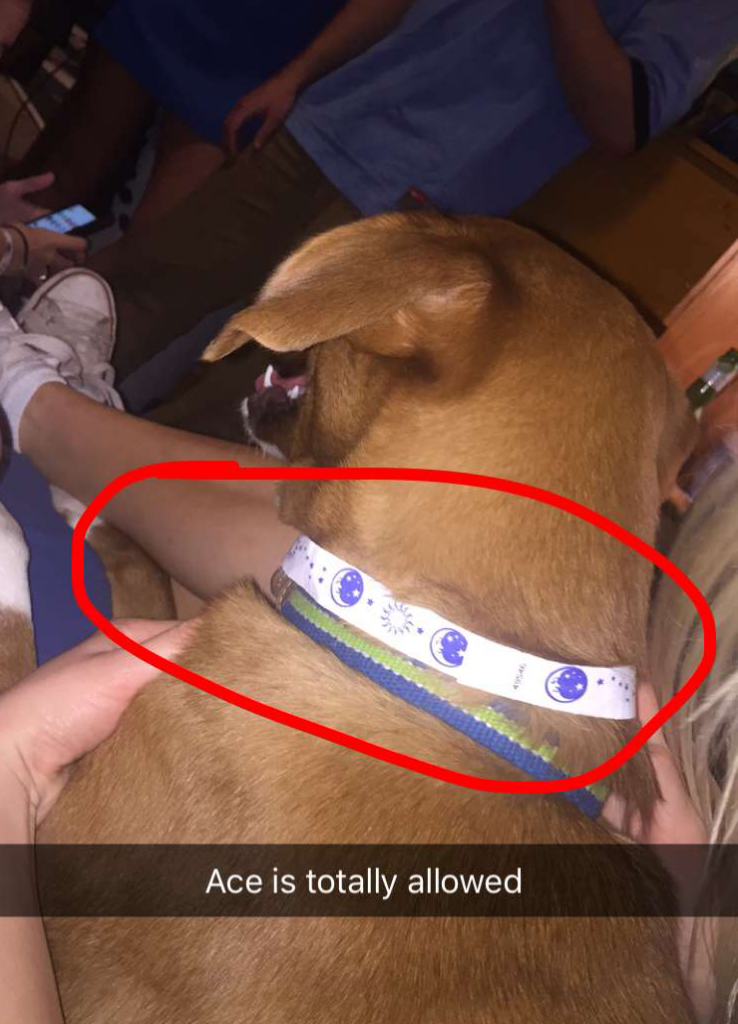 Baby Hold On, ’cause The Dixie Chicks are back

On Monday, The Dixie Chicks made all of our dreams come true by announcing they’re going on tour next summer, starting June 1 in Cincinnati, Ohio.

Tickets went on sale on Friday, so make sure to grab yours before they sell out.

P.S. They’ll be in Raleigh on August 12 at Walnut Creek Amphitheater. 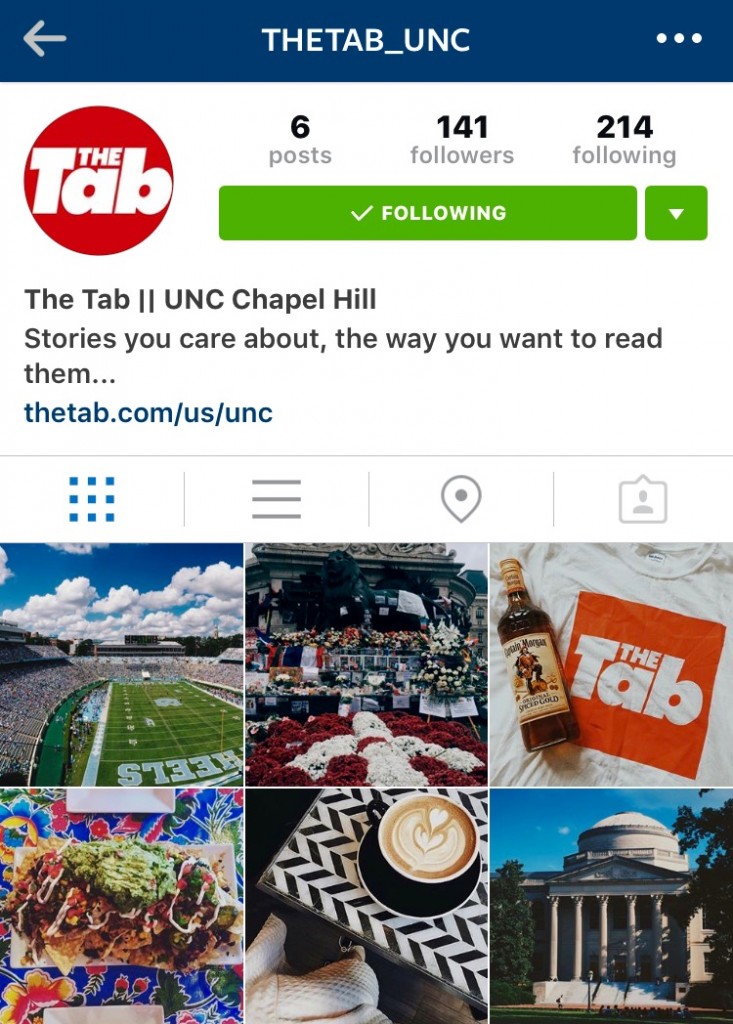 50 demands for change at UNC

The Real Silent Sam Movement, which campaigns to have the statue of the confederate soldier removed, uploaded a 14-page document to their Facebook page detailing a list of 50 demands.

Some of the demands included gender non-specific bathrooms, the elimination of tuition and fees for all students and university dining halls, gyms, libraries and class registration to be open to all NC residents, regardless of their admission to UNC.

What we pre-gamed to this week

Whether we’re playing an intense game of flip clip or killing it in a beer pong tourney, this is our go-to playlist for any pregame.

What we’re falling asleep to this week

When our poli-sci textbook readings can’t even be a source of natural melatonin, we’re getting our sleepy vibes from “easy going” by Spotify user and UNC sophomore, Dean Lovett. From John Mayer’s rendition of “Free Fallin'” to Train’s “Jupiter,” this playlist will have you dozing off to sweet dreams in just minutes.

Shooters owner woke up on the wrong side of the bed

After a huge crowd of Tar Heels swarmed Shooters bar in d00k territory on Wednesday, the owner was less than impressed with our “lack of Carolina class.”

The owner took to their Facebook page to type out an aggressive and all-caps status about our behavior and proceeded to ban us from further entry into the bar. 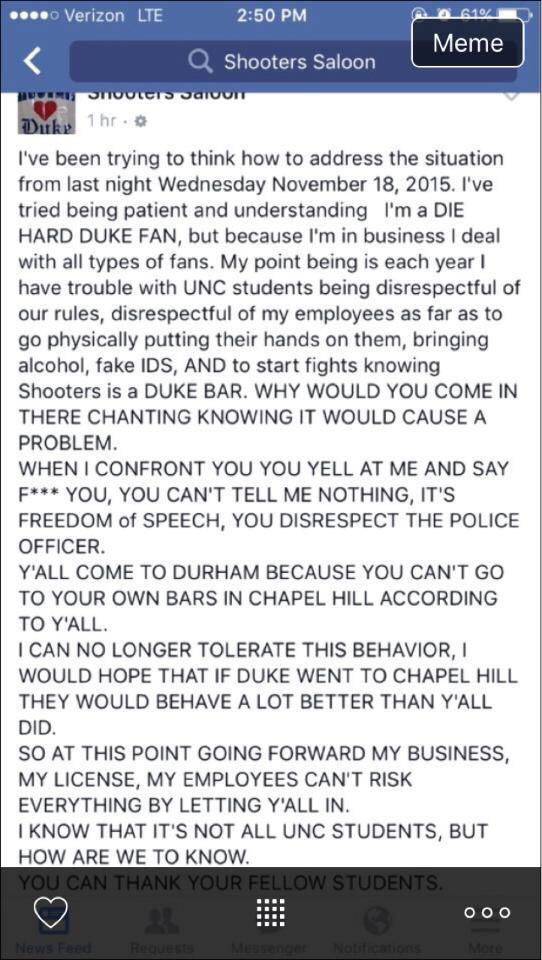 However, the status was deleted and replaced with a new one, so apparently we actually are allowed to go back now. Get all the details here.

The end of an era

Traffic built up on I-40 E on Thursday night as students rushed to Southpoint to see the final installment of our favorite series, The Hunger Games: Mockingjay, Part 2. The flick generated $16 million on just Thursday night, proving that #TeamPeeta fans remained dedicated as ever ’til the end. 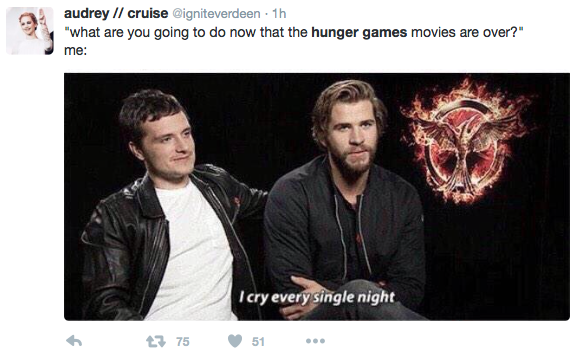 Sleeping his way through finals… and parties?

UNC junior Osei Avril’s practically narcoleptic sleeping habits have been documented by his friends, and the compilation of pictures is unbelievable.

We’re not sure how it’s possible to fall asleep at basketball games or a Phi Delt darty, but we appreciate the entertainment. Check out the account @osei_sleeps here. 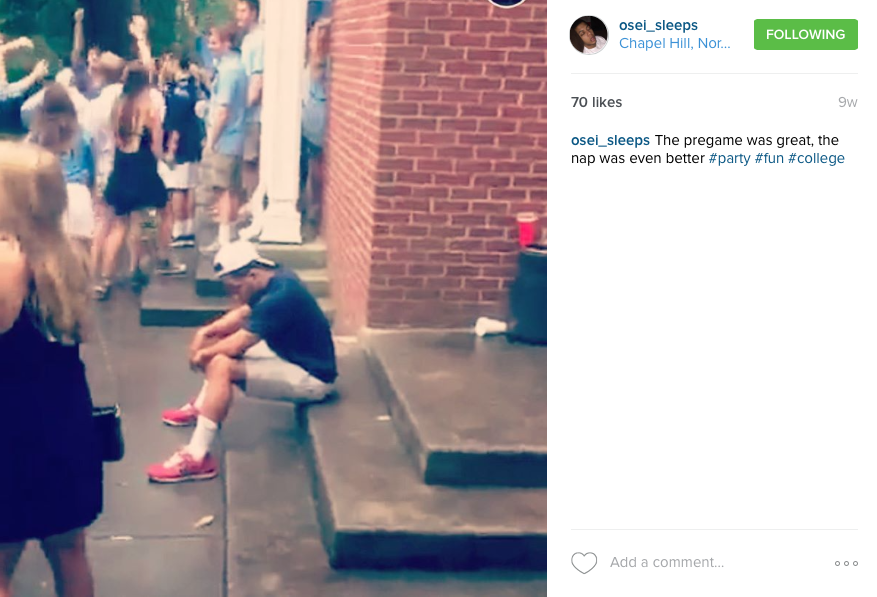