The finest bathroom graffiti at UNC

Some inspiration while you pee

Inspiration has been known to come at the most random of places, and the bathroom is no exception.

In the words of Sam Smith’s new single The Writing’s on the Wall – which may be about a lovers’ quarrel or maybe he was particularly moved by strangers’ eclectic bathroom thoughts, but I guess we’ll never know.

Around campus, scribbles, doodles and thought-out pieces can be found jotted down on almost every stall in every hall and building. They can give a sense of what Carolina is really thinking. 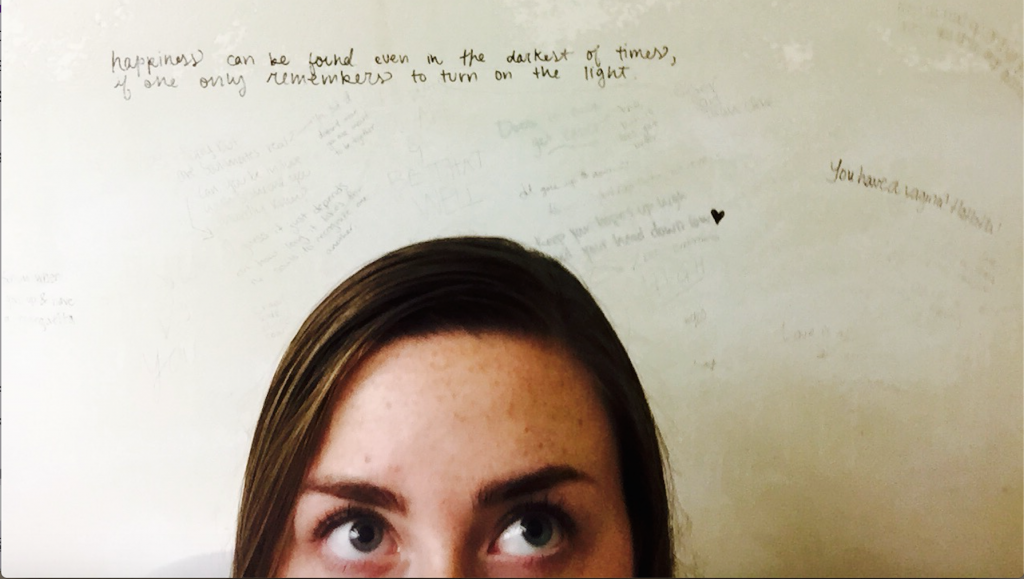 This gem, found in Davis Library, was one of the most positive I have seen. Someone most likely wrote this during a time of stress and struggle (AKA all the time) and was looking to either uplift their own spirits or share wise words with their fellow students in need. It actually made me feel better, so thank you, kind stranger.

Something this nice can only be followed by something else nice, right?

Well, guess not. This person probably stumbled in the 6th floor bathroom in Davis on an early Sunday morning to empty the contents of their Saturday night with little to no one noticing. They probably thought to log it on the bathroom wall so others do not feel as alone in what might be considered their “low point,” or just another Sunday morning. 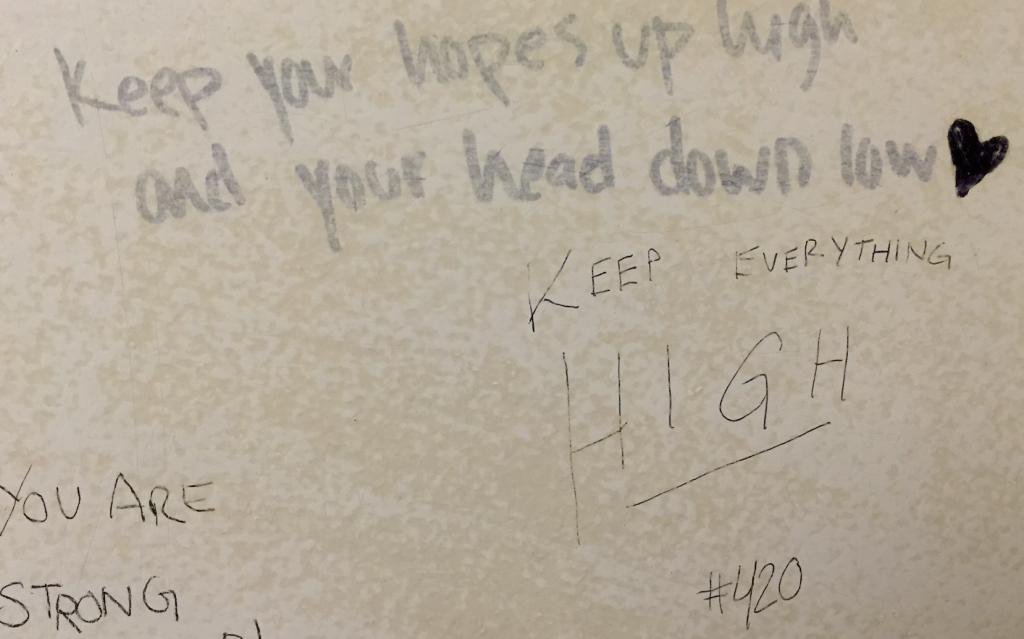 This would have been a very nice piece of vandalism if it were not for the extra comments. #420. At least there was a sense of dialogue and community on our bathroom walls and it probably provides a bit of laughter for a study break. Can’t you just see this person chuckling to themselves while writing this? 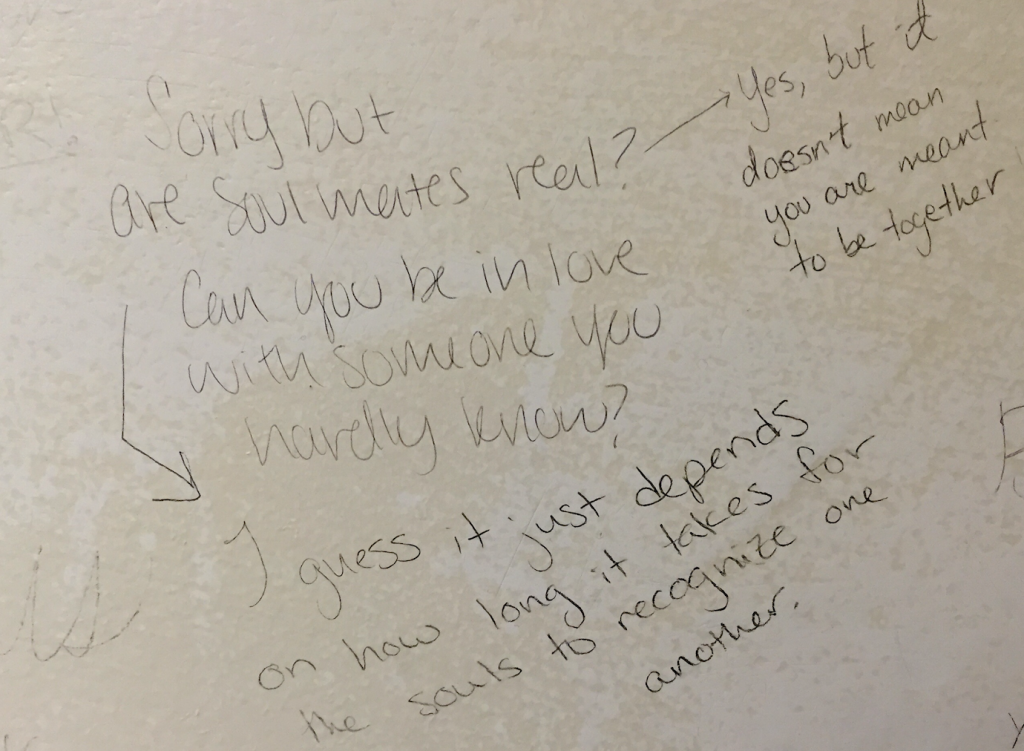 Speaking of dialogue, it seems some people feel like the bathroom wall is much more discrete and reliable than Yahoo Answers. Even some of the most deep and meaningful questions have been left for people to answer while they use the restroom.

I’m sure this person returned multiple times to see responses and whether or not she has actually found her soulmate. At least she took advantage of the anonymity of the stall wall and allowed herself to ask the tough questions others might be too afraid to ask themselves.

The bathroom walls can be used for inspirational quotes, as a message board and to promote social media. It seems Wade Barrett, WWE wrestler also known as Stu Bennett, has a few fans here at UNC.

While he may be considered the #RealMan, it seems some students think John Cena is more worthy of people’s time. Many do not have time to contemplate wrestling rivalries while going to the bathroom, so it may go unnoticed.

Bathroom scribbles have even gone bilingual in, you guessed it, Dey Hall. As in “when I’m there I want to Dey” Hall. The ones I found, even when translated to English, are still hard to understand and took a little research to figure out.

This translates roughly to: “We go slow because we go far” and has been used in many social awareness campaigns, such as global sustainability. And who says bathroom time can’t be educational?

This quote translates to: “Ignore this heaven in the world, it is the deep deep sea,” which comes from the famous song, “Obsesión.” The lyrics seem to be worth more than face value.

Lastly, this one is my personal favorite. 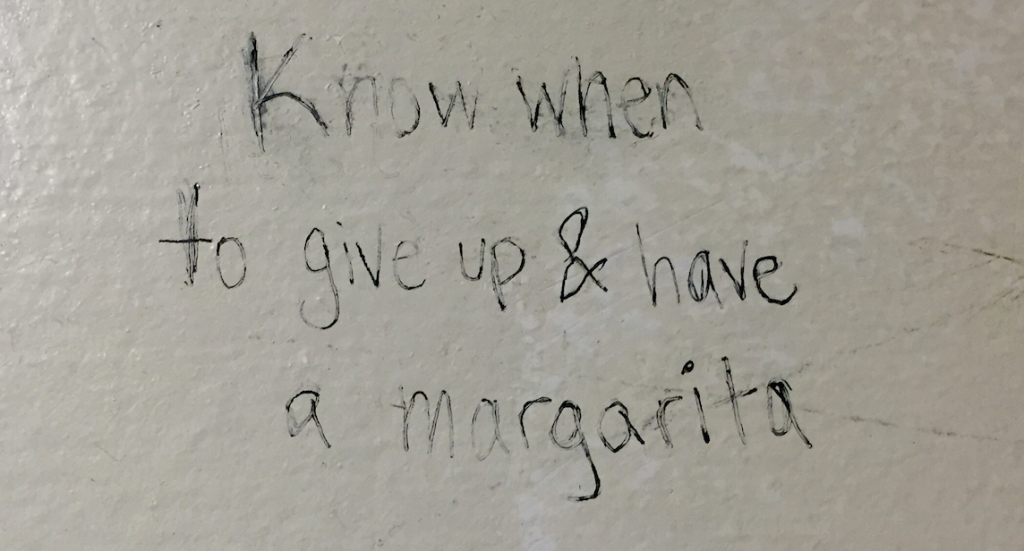 This was found, again, in the 6th floor Davis bathrooms. I’m not sure what it is about the 6th floor, but people seem to really be inspired up there.

This person has obviously had a hard time in the past few days and is “wasting away again in Margaritaville.” Leveling with yourself is important, and knowing when to stop and take a break is as well – whether that means watching Netflix, getting a snack or grabbing a margarita.

If this does not convince you to get off your phone while using the restroom, I don’t know what will. There are so many random thoughts to be read, and deep, life-changing questions to be answered as long as you keep looking to the sides.