Activists issue 14-page list of demands for change at UNC

The Real Silent Sam Movement, which campaigns to have the statue of the confederate soldier removed, uploaded a 14-page document to their Facebook page detailing every demand and drawing a parallel with the demands of black students in 1968.

Yesterday they took over a UNC town hall meeting in Memorial Hall and read the list of demands. UNC Administrators, the Board of Trustees, the Board of Governors and the North Carolina General Assembly were present at the meeting.

Among the audience was UNC Chancellor Carol Folt, who listened to the students as they spoke and seemed to give them encouragement in their campaign.

She said: “Many things they raised are things we’re working on all the time and will continue to work on, so I think it gave me some good ideas and direction.”

The document says UNC is an “unethical institution” and says there is an “anti-Blackness that stains the very roots of this University.”

Members of the Real Silent Sam movement encouraged other students to use the hashtag #WeDemandUNC on Twitter and Facebook. 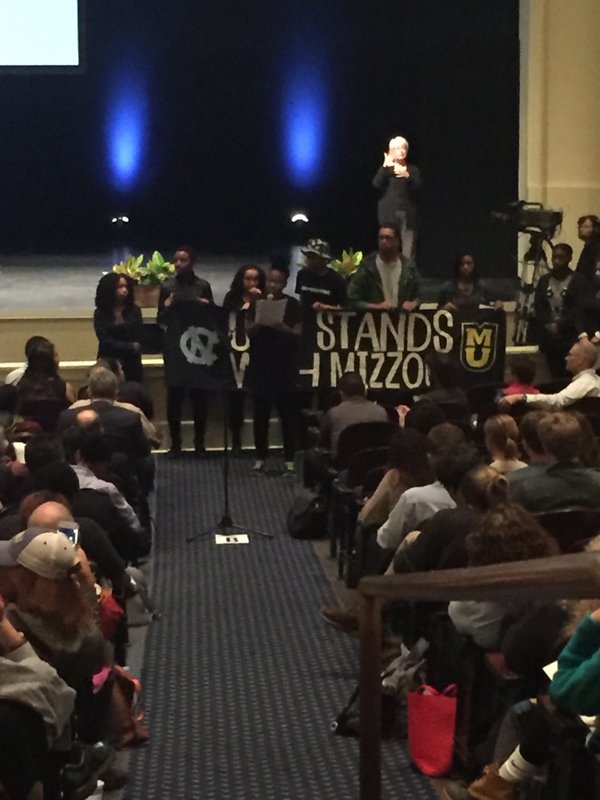 Many of the demands were voiced earlier this year by the group. They have repeatedly called for the removal of the Silent Sam statue and the renaming of Carolina Hall (previously Saunders Hall) as Hurston Hall after black author Zora Neale Hurston. The group also wants a plaque on the building recognizing William Saunders as a prominent member of the KKK.

Other demands are based off of recent events, such as the appointment of UNC-system president Margaret Spellings. The Real Silent Sam Movement calls for her immediate firing, as “she has shown herself to be homophobic, describing LGBTQIA+ people’s lives as ‘those lifestyles.'”

Campaigners are also requesting the October 25th pro-Confederate rally for Silent Sam be publicly condemned due to protesters’ “terroristic intimidation of black students at UNC.”

The document makes multiple requests that a “formal priority” be made in recruiting and hiring black faculty,” specifically in mental health positions in the CAPS program.

Regarding the police force present on the campus, the Real Silent Sam members demand “policing as an institution be abolished,” all surveillance cameras – specifically those surveilling monuments on campus – be deactivated and removed, and the UNC Department of Public Safety and UNC Hospital Police be disarmed.

The recognition of student-athletes as University employees, requiring a base salary of $25.00/hour with benefits, as well as appropriate compensation matching the revenue they bring to UNC. They describe the men’s basketball and football programs as “the exploitation of black men.”

The group’s other demands include:

The document ended with: “Gone are the days where we ask for that is past due to us: we are here to take what is ours. Tear it down, or we shut you down.”