They are due in court for their hearing today

Throughout the duration of the effort, five protesters chained themselves to the two entrances to the building – preventing customers from entering for several hours, until four of them were arrested.

The police had arrived on the scene 20 minutes after the entrances were blocked and were given a 30 minute warning to disperse before arrests were going to be made, though only one of the chained protesters removed himself from the blockade. It wasn’t until 1 p.m. that the fire department and police officers moved on the remaining four. 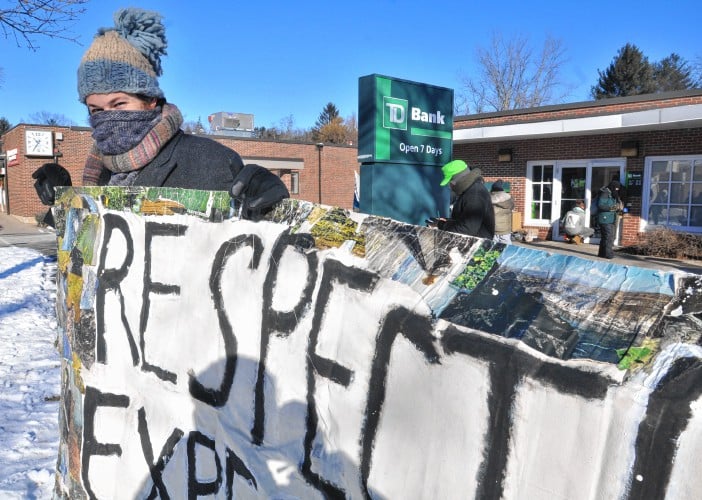 (photo from the Daily Hampshire Gazette)

The four arrested protesters are Alyssa Johnson-Kurts, 22, Marc S. Osten, 54, Harrison J. Greene, 30, and Paxton Paul Reed, 19. They are due in court for their arraignment hearing today.

Bank protests like this one are not the first in this area – the same Amherst bank experienced protests December 5th – and are being seen across the country as well. There is still high concern for the pipeline being built as the Energy Transfer Partners have stated that they are not concerned with paying fines for drilling without a permit and the completion of the pipeline has only been temporarily halted.