‘One gone is one thousand gone’: Women protecting women at Standing Rock

My experience as a Non-Native woman

I still have the jail hotline number written on the back of my hand from my meeting with a lawyer. For whatever reason it doesn’t seem to fade away. Perhaps when it does, I’ll rewrite it anyway. I don’t want to forget. I’m terrified of forgetting what happened.

I thought when I got back I’d want to tell people about all I’d learned. That we were warned to wear thermal clothing because police were stripping people down to their base layers and holding them in dogs kennels without heat. That we’d likely be strip searched against our consent, and that it would be best to just comply. I thought that’s what people needed to hear most. 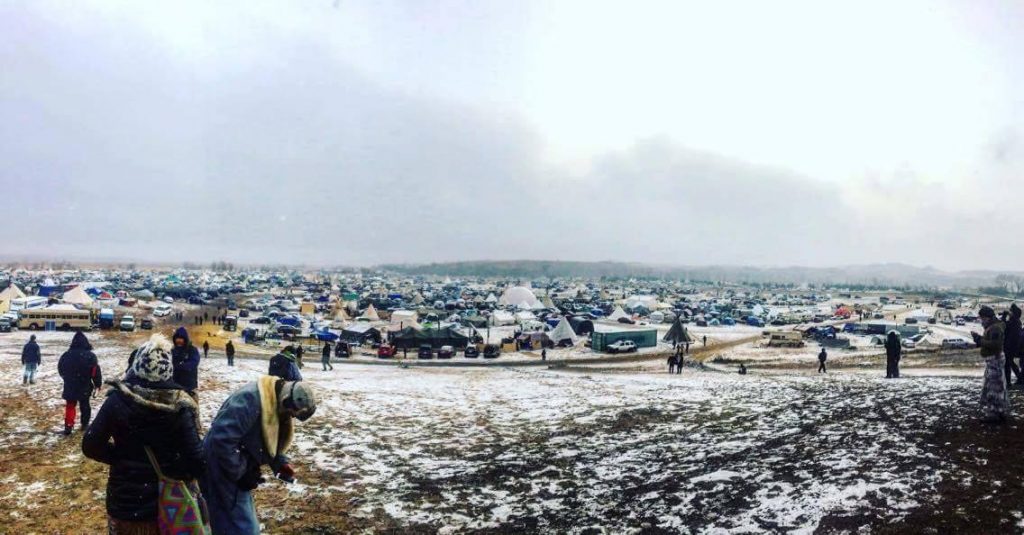 What I want to tell people about is life at the Oceti Sakowin camp, specifically as a woman.

Before getting there, I saw this struggle as having two sides: the Native and Non-Native allies against the government and militarized forces protecting the pipeline. When I arrived, that changed. There were suddenly faces to this struggle — people I worked with, served food to, cried with and lived with.

I’m writing this so you might also have a more humanized view of these water protectors.

At first glance, it looked chaotic and make-shift — people, cars, tipis and tents of all shapes, sizes and colors. My group and I were camping at Oceti Sakowin, the largest camp at Standing Rock, despite not being within the Reservation lines. There are thousands living here, and it stretches far.

I went to North Dakota with six girls in their early twenties — all of us of caucasian descent. None of us had experienced a matriarchal community in our lives, so once we settled in, the differences became abundantly clear.

The women were at the heart of the community

Every afternoon there was a women’s meeting in a dome built in the middle of camp. They spoke to us about being a woman both in camp and in this world — what we must be wary of. Each meeting was run by Mal, one of the most powerful women I have been in the presence of.

But the camp was filled with women like this. Women who stood proudly for their community and their planet. Women who would not be trampled by the fear of the “black snake,” as it dug its way through their sacred burial grounds, nor by the fear of violence coming from those who were protecting said snake. There were strong women. Sacred women. 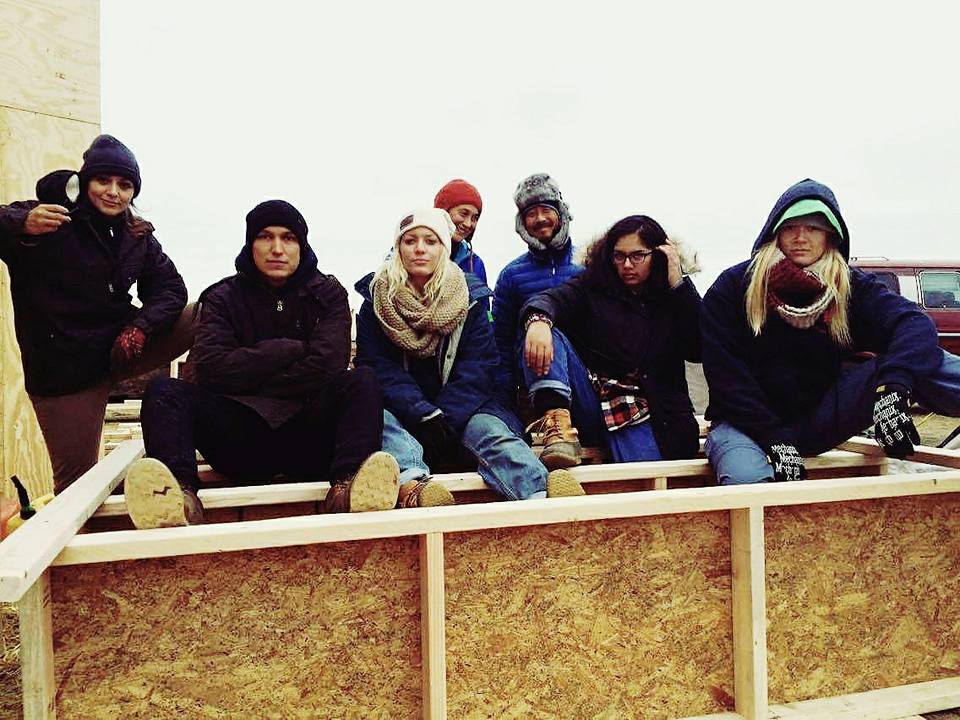 Building shelves for the elders – I’m on the far right

The Thursday of Thanksgiving, my group was on a hill when men on horseback flew by shouting “All women and children to the dome! Raid coming!”

It was terrifying. There had been rumors as to what would happen during a raid, but no one was sure. Talk of dogs, arrests and fines, violence. The lawyers said anything was possible. Women and children were ordered to evacuate and park their cars over the bridge. We took those who didn’t have a car with us. Once there, Mal took the megaphone.

“The men are going to be very angry with me. They don’t think that women need to know what’s going on, but we do, so I’m going to tell you.”

“One woman gone is one thousand gone,” she said.

The raid was a false alarm, but Mal said if there was any risk of harm to our women or children she would act. 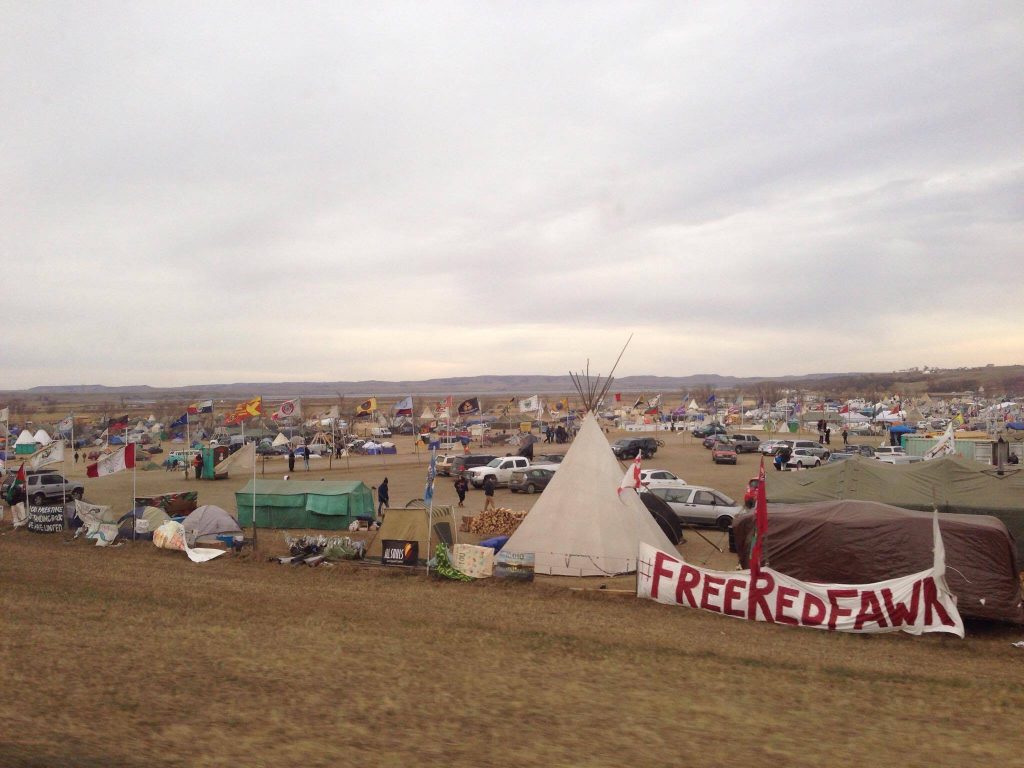 In a giant field filled with thousands of people, there will be reasons to worry. Anyone could come in, so there are those who come in for the wrong reasons. But before I explain that, I want to be clear the camp was home.

I told my friend after a few days I had never felt so safe in a sea of strangers. And it was true. We were scared, but we were together. The natives called one another Brother and Sister; this movement was as much about healing as it was about protecting our Earth.

While serving food, the gratitude people showed was authentic. I realized I’d never seen true gratitude in my life. When another girl in my group, Carrisa, was serving food, two women in line told her they loved her.

“They gave us stickers that read ‘I am love,’” she said.

One afternoon I watched as a man walked up to another and told him he liked his button. The man thanked the stranger and told him he could have it. “Really?” asked the first man. “You don’t have to do that.” But he had already removed it from his shirt. I watched as the strangers embraced one another. “Thank you for being here,” said the first man. “You as well,” said the second. 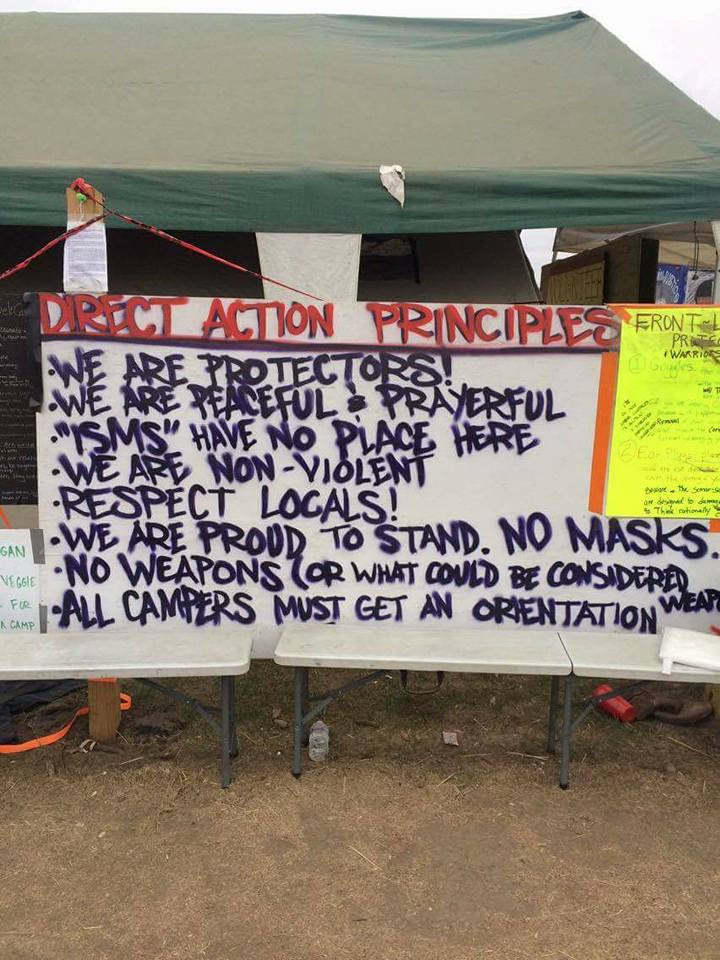 These principles were repeated again and again during orientations and trainings

People who were not there for the right reason

One night, walking to the sacred fire, a man from security came up and warned me not to go out alone at night. “Women are to walk in groups when moving around camp after sunset.” He seemed worried about something, but to this day I’m not sure what had happened.

Mal spoke about it at the women’s meeting. Since the camp had grown, keeping track of people had become difficult. Where they once knew everyone’s face, they now knew almost no one. There were too many people.

A handful of women had been raped. Another handful were missing. I’m not sure the exact numbers.

No one knows who is taking these people – most of them women and children — and there was a bit of a fight as to whether it was the military doing it through camp infiltrators (a very heavy accusation), or people who had come to camp to cause trouble.

Still, people were protective of us. Still, it felt safe. 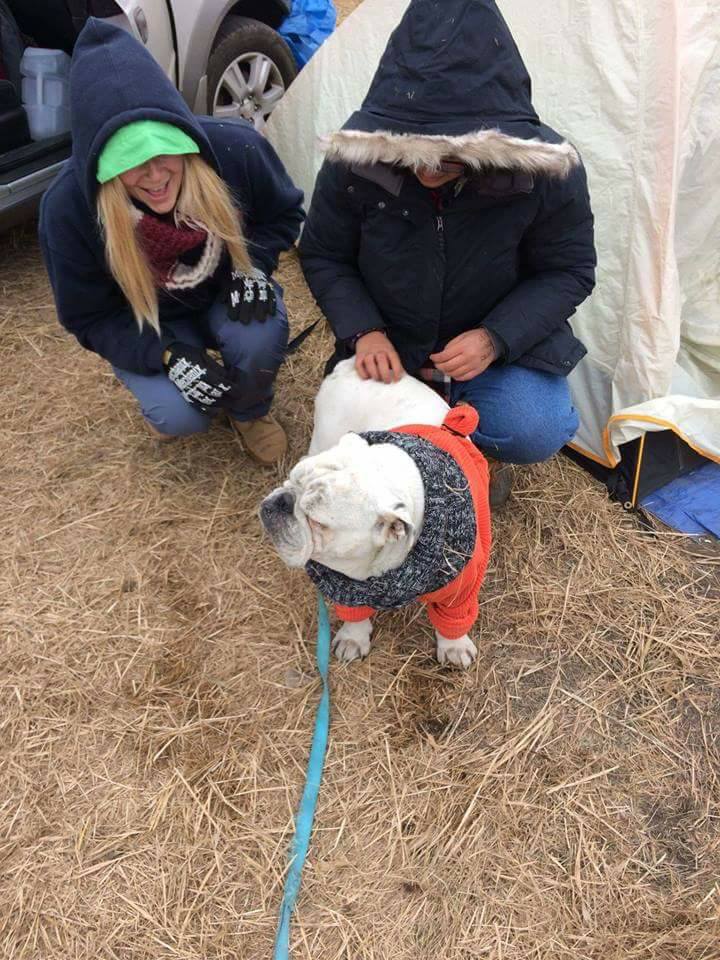 There are dogs everywhere at camp. This one was cold and without an owner so we got him a sweater

The Women of Standing Rock are heroes

There’s no other way to express how much I have been touched by their words, their strength, their power. We were not there to be competitive with one another. An indigenous woman spoke of this at the sacred fire one night:

“We are not against each other,” she said. “It doesn’t matter who is thinner. Who is taller. Who has the better skin. We are all women and we are all beautiful. We matter. We are sacred. And we are here to support one another because we are all family and we are going to protect our water.”

I cried as I listened to them sing for Red Fawn at the sacred fire. I felt empowered as they spoke of Mother Earth, of our fight, about strength and respect.

I felt honored to be in their presence. 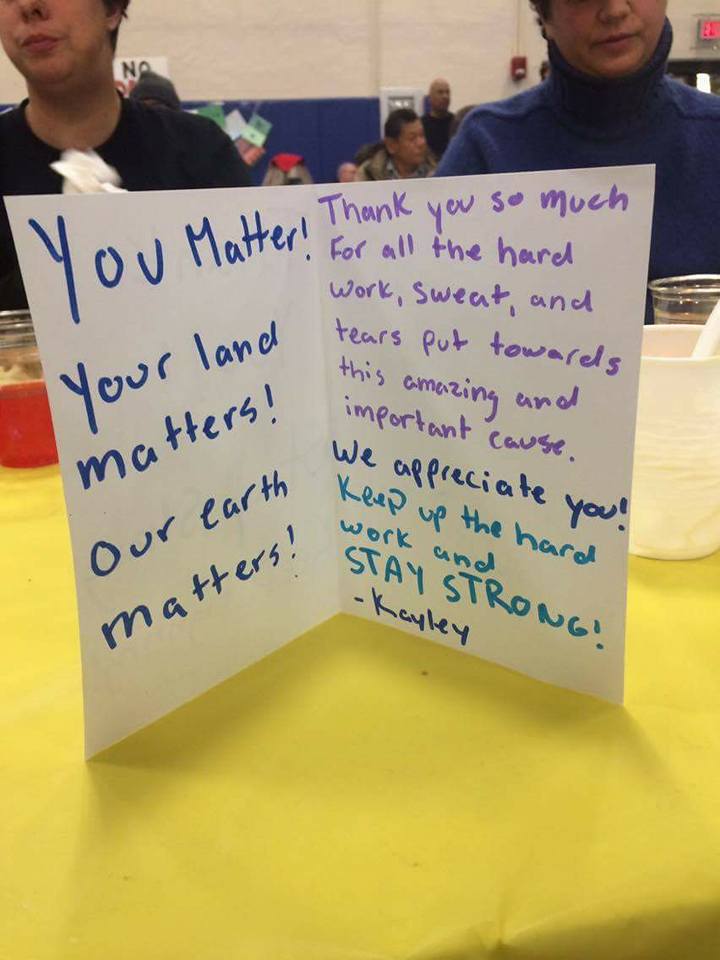 Cards from students at Standing Rock elementary and middle school