UMass doesn’t want you ‘whipping out anything’ for Harambe

Any such references will be reported as sexual assault incidents

This morning two of the RA’s for Sycamore 3 sent out an e-mail referencing the recent defiling of whiteboards and walls across campus with things like “Harambe died for our sins,” and “dicks out for Harambe.”

Last time I checked, whipping it out didn’t mean that someone was mourning? But what do I know, I don’t have one.

In the email, the RAs stated that these phrases, “are not only derogatory but also micro-aggressions.”

“To be very clear,” they continued, “phrases/hashtags which encourage the exposition of body parts runs the risk of being reported as a Title IX incident. These are sexual incidences that not only get reported to community standards, but also to the dean of students.”

Not only does the meme suggest exposing one’s self, but it also is aggressive and derogatory in nature. Harambe is a Defined Residential Community, located in Southwest. “Harambe” is Swahili for “the point at which things come together,” based on the DRC website. Harambe honors the African and African-American history and culture for those who are or identify as African or African-American, or for those who want to learn more about the rich history.

Not only were the whiteboards defacing property and suggesting someone to expose themselves, but more importantly, it’s also disregarding the long and rich African history, as well as potentially hurting our classmates here at UMass.

UMass is treating any writing of "Harambe" an attack on black people and a sexual assault https://t.co/9nyxZF4mjd pic.twitter.com/JtDXmiWNsv

“Dicks out for Harambe” blew up as a meme online, as a “symbol” for mourning the death of the gorilla following his death at Cincinnati Zoo after he dragged a child around his enclosure. The child, who was only three years old, fell into the enclosure after crawling through some bushes and over the fence. An employee of the zoo, who was fearful for the child’s life, shot and killed Harambe. 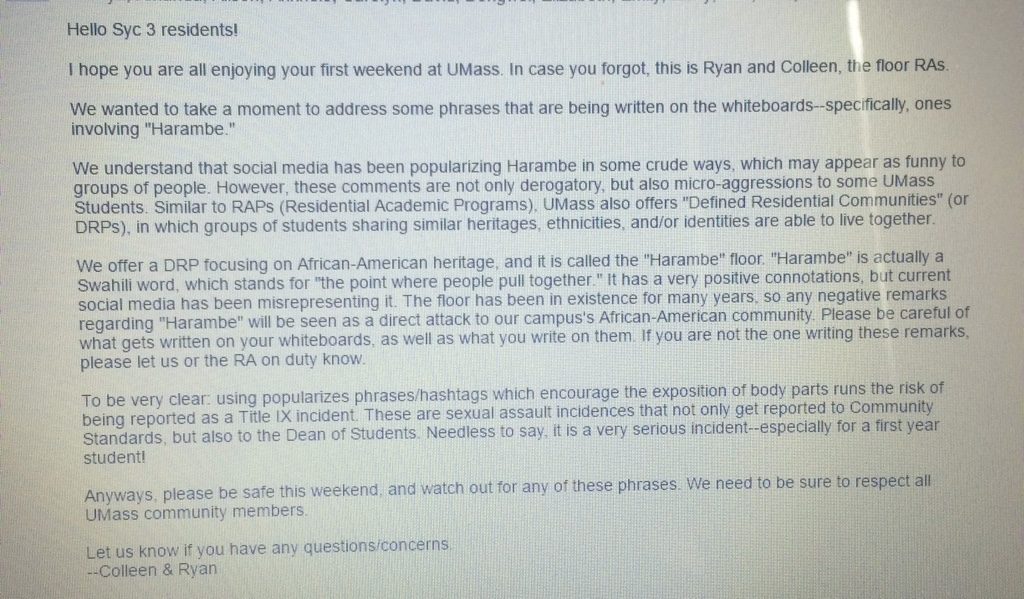