Here’s where ‘The Triggering’ went wrong

Practice what you preach

This event had caused controversy since it was initially announced. Yiannopoulos has been on a nationwide college tour, sparking controversy and protests all over the place.

We attended the event with a very limited knowledge of the speakers, their views and opinions. It was an opportunity to hear perspectives that we may or may not agree with. It can be very useful and helpful to hear new opinions and ideas, even if you disagree with them. However, this was not a productive event.

Again, remember that the panel was advertised as a discussion on free speech and political correctness. For a minute, lets review free speech in it’s most basic sense. Finals are coming up, after all.

The right to free speech as identified in the first amendment means that the government can’t arrest you, prosecute you, or jail you for what you say. What free speech does not mean, however, is that anyone has to listen to what you say, or host you while you say it. It is worth mentioning that the first amendment does not shield you from criticism, so if you are yelled at, booed, have your event cancelled or protested, your free speech rights are not being violated, and this is not the “death of free speech” that is seemingly feared.

It’s just that people listening to you think you’re an asshole.

And they’re allowed to tell you so. 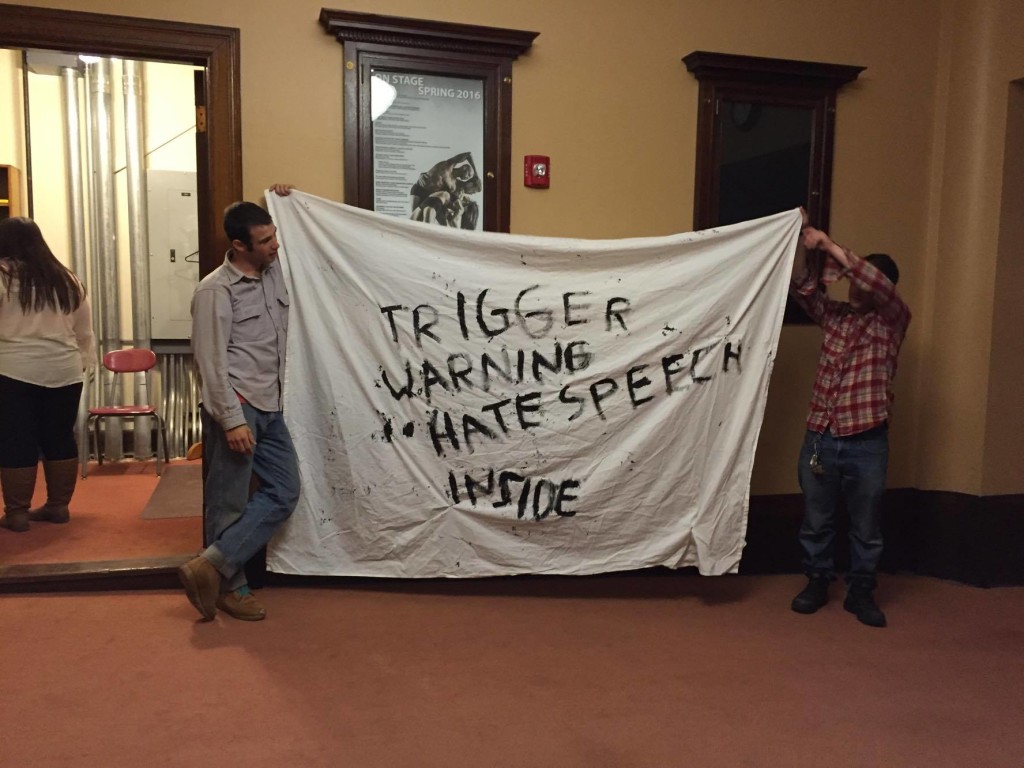 As for “The Triggering” itself, trigger warnings are not a new concept. Think of the MPAA rating system that says folks under 17-18 can’t attend an R rated movie that might contain vulgar or offensive language. Many online posts have tags like “NSFW: Not Safe for Work” that warn of their content before they can be clicked upon.

What is new, however, is the expectation that everyone should be forced to listen to everyone’s opinion on everything all the time without objection, and the right-wing vendetta against posting “trigger warnings” on events and internet articles that contain sensitive themes not unlike the ones identified in the movie rating system.

Like many issues illuminated by the unforgiving light of history, the trigger warning controversy may very well be less about what it is, but who it helps. Content warnings help rape survivors, veterans and other people suffering from PTSD, people with depression, or people who just don’t want to see some horrible shit, and there’s a lot of it out there.

But that’s not really what the event was about, was it.

Yiannopoulos took to the podium for his opening and matter of factly said “Feminism is cancer”. Sommers took then gave her opening statements and described feminism as “utter madness”.

Almost instantly a small number of audience members expressed outrage. Yiannopoulos tried to stop the interruptions by informing the crowd that for every interruption he would be donating $50 to the Trump campaign and to the Yiannopoulos Privilege Grant. Some of you may ask ‘what is that grant?’ It is a scholarship available to only white men, and, yeah, it’s exactly what it sounds like. 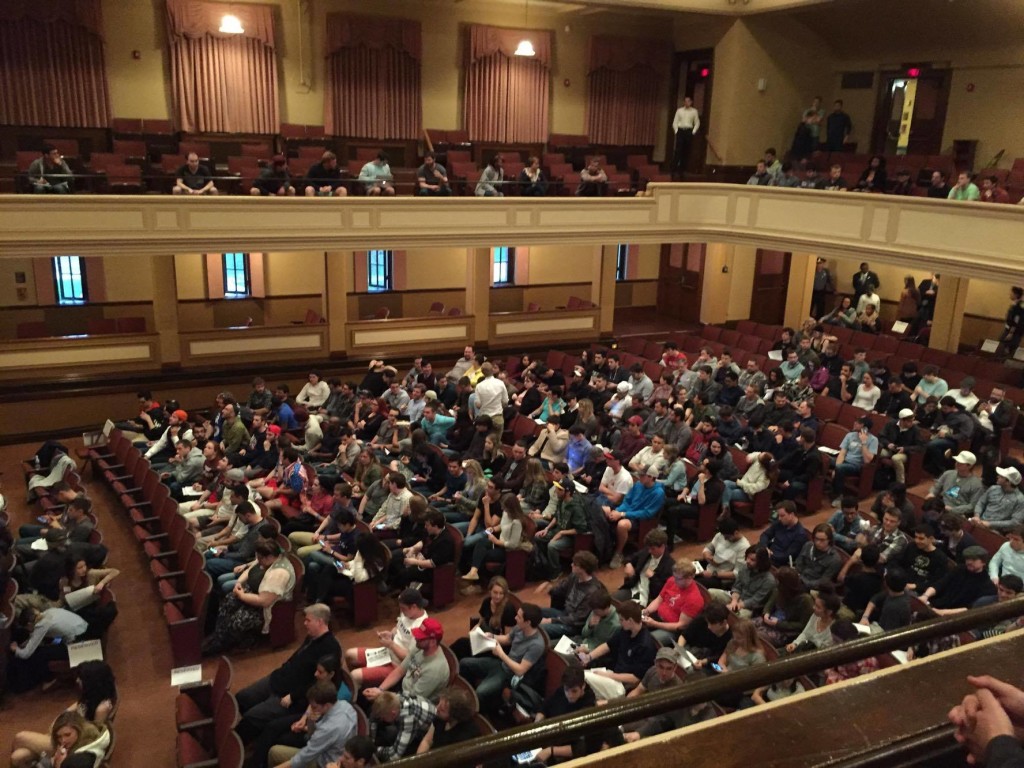 Yiannapolous then laid out the differences between political correctness and politeness and etiquette. He defined etiquette as something that allows us to negotiate and interact with people who don’t come from the same background as us “in order not to offend people who come from other cultures and other backgrounds.” OK, that’s a fair principle. We should all be able to speak to each other in a civil and respectful way. He described political correctness as lies that are meant to protect the feelings of “delicate wall flowers” and at its very worst can be “deadly”.

This distinction made by Milo is an important one. It plays a huge part in the interactions between him, fellow speakers, and the audience. All three speakers know they are controversial. They have strong beliefs that differ from other’s strong beliefs. Hecklers, outrage, and frustration was to be expected at an event of this nature.

This event had its fair share of hecklers. It is hard to argue for the effectiveness of hecklers, regardless of whether or not you agree with them. I don’t agree with hecklers’ methods, even if I do agree with the message. It is hard to effectively communicate a point when you are yelling. I firmly believe you cannot and will not change someone’s opinion through attacks or acts of emotion. It requires civil debate where both parties present an argument and are allowed to debate. Heckling and interrupting is never productive, and often it is counter productive. 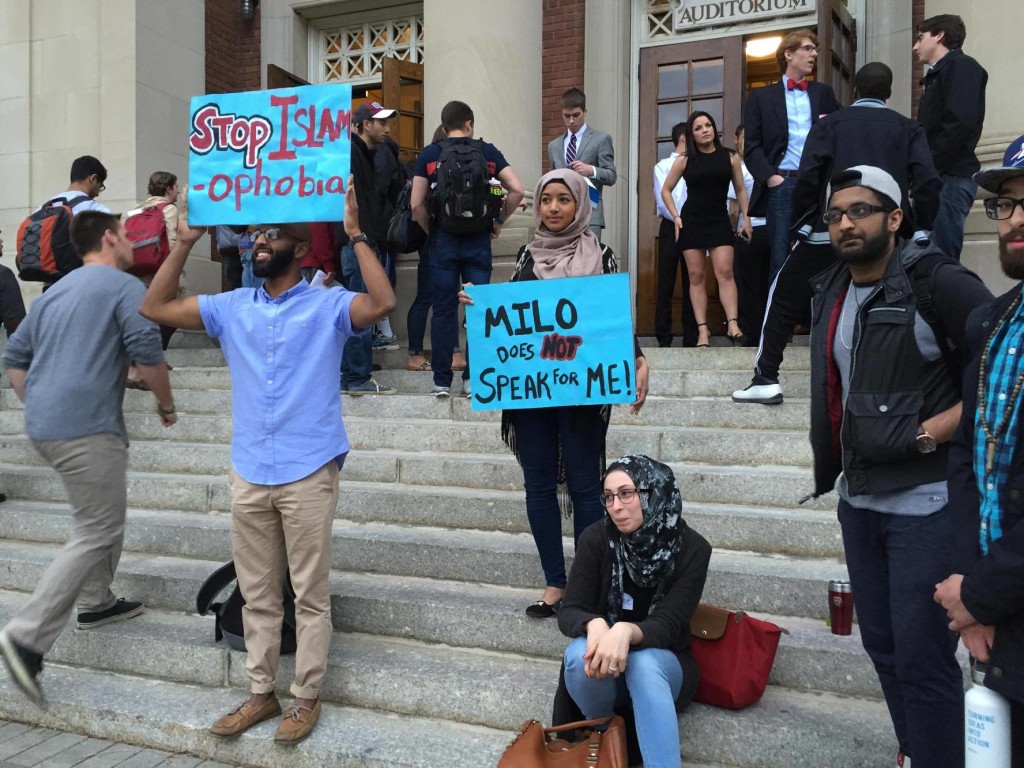 At this event, it was counterproductive. It allowed Sommers to have a real life example of the so called “madness” caused by feminism. It gave members of the audience a chance to rally around a common enemy. The hecklers were outnumbered. However, they were not outclassed.

Towards the end of the event, Milo pointed out “disgusting language used about Margaret Thatcher, Sarah Palin, Michele Bauchmann… look at the kind of sexually charged, lurid language by the left against women who don’t sign up to the system. And look at what’s happened this evening, the lack of respect and courtesy”. He then referred to various protesters at his previous events as “fags.”

However, what he didn’t point out was the behavior in that room at large. The audience cheered as fellow speaker Steven Crowder alluded that a female heckler was a dog. He allowed for audience members to scream at hecklers to “shut the fuck up”. He tells another audience member “I make more in a year than you probably will in a lifetime”. Crowder asks a man asked a question about the rise of Islamophobia, “why do you feel compelled to defend an ideology that would throw you off a roof for looking like Rachel Maddow?”

Crowder then looked the row of Muslim women in the front row in the face and shouted something very close to “Muhammad was a terrorist!” into the microphone. The exact words can be found in this youtube video. 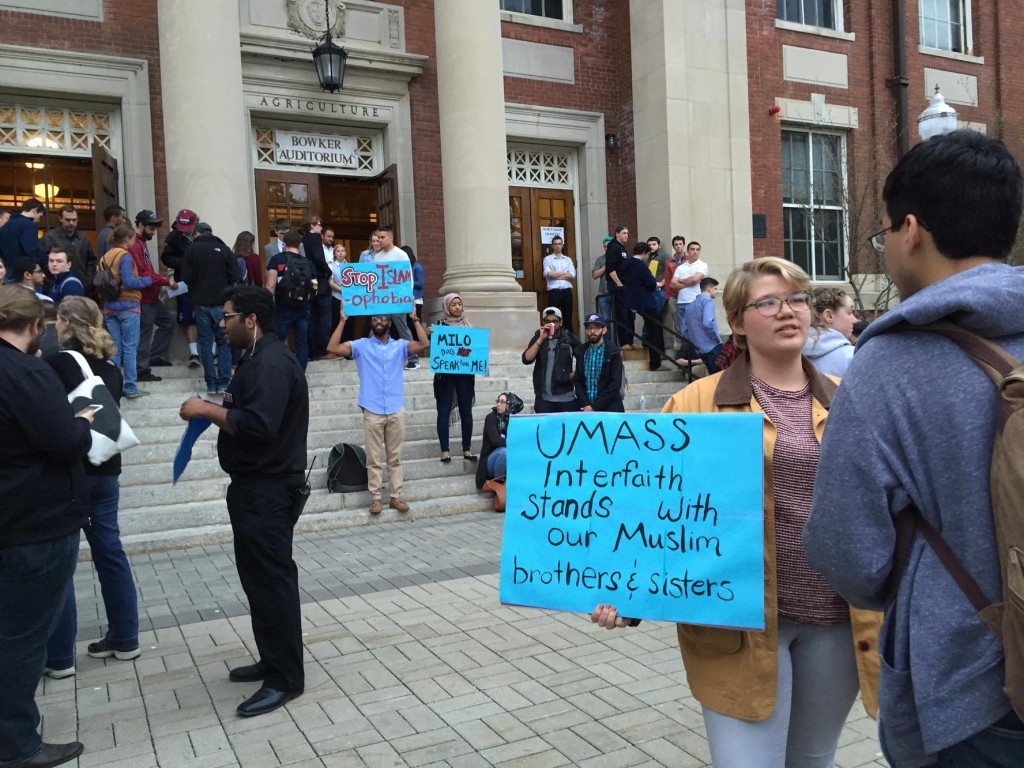 The issue is not these comments and actions from both the panel and the audience, including the hecklers and the heckler haters, were fascist, or racist, or homophobic, or sexist, or Islamaphobic. I mean, you could obviously argue that they were, but the panel doesn’t care about that. Maybe I’m being a “delicate wall flower” but the real issue is that is was not “polite”. Something Yiannopoulos claimed to value and respect.

When people are on a stage, with a spotlight and a microphone, it is hard to communicate with them without screaming, even to have an intelligent debate.

This goes beyond the hecklers, beyond the panel, and beyond any member of the audience that screamed at another member of the audience. People at the event acted and presented themselves in a respectful manner. The last person who asked a question and told the panel “I don’t agree with what you guys are saying, but I support your right to say it”. This comment made him the most applauded person of the entire night.

He then went on to ask Crowder how he felt about his videos claiming there is not such thing as modern Islam. He was concerned that Crowder made a generalization about entire religion and those who practice it. He questions Crowder’s claim, as he and some of his peers do in fact practice modern Islam.

This caused the low point of the event. The panel went into a rather heated and impassioned discussion about the dangers of Islam. Yiannopoulos went so far as to say that there are two types of Muslims in America. There are the “nice, assimilated, middle class” Muslims who aren’t the “most devout believers…some of them don’t pray five times a day”. He described them as “cultural Muslims”. The other group of Muslims, the only other group of Muslims, are “terrorists”.

I am so impressed that Yiannopoulos was able to meet every Muslim in America and talk to them long enough to understand their faith as well as their income. Good job, Milo. You did it, bro. *Feminist jazz hands* (Those of you at the event would know what that means). 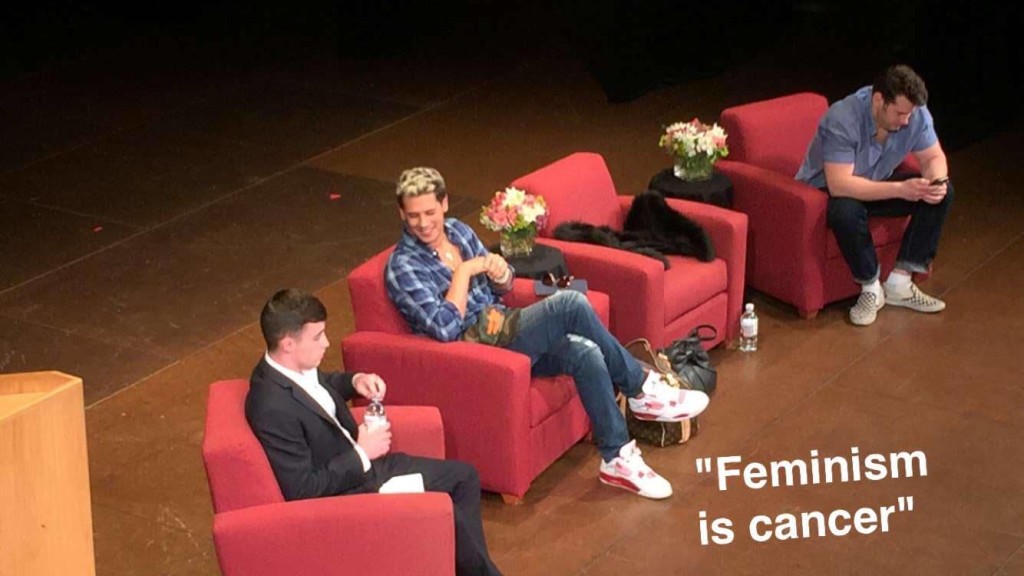 Not only was this comment absolutely absurd, but it was dangerous, and here is why: After Milo made this distinction we focused our attention to the man who asked the question. He tried to tell the panel and the auditorium that he prayed five times a day. However, audience members weren’t allowed a follow up question.

Meaning the man who respectfully asked a question had to be told he was either “culturally Muslim” or a “terrorist”. He himself was proof that that statement was complete and utter “madness”. He was left with two options, say nothing, or desperately scream at the panel only to be overpowered by the microphone, the stage, the spotlight, and most of the audience members’ support. Because due to time constraints, or whatever, he wasn’t able to ask a follow-up, or in his case, defend his religion.

If freedom of speech is that important to you, then let it happen. Because yes, while the hecklers and protesters tried to stop and silence you, they didn’t. Your event was held. People showed up. Some of those people agreed, while some disagreed. However, the only group that silenced another, was you.

After going to this event it is understandable why people were afraid. Because what was said was dangerous. Not only because it was said, but because it went unchallenged. There was no ‘etiquette’ that allowed for debate, and then, there was no debate.

At one point during the event Milo described the importance of freedom of speech by using the example of the British National Party. This far-right political party in the UK was criticized heavily for it’s views on same-sex marriage and multiculturalism. It was accused by many of being a fascist party. After just a few years of the party’s introduction, membership is estimated to be only be in the hundreds. The party virtually doesn’t exist.

You’re right, Milo. Freedom of speech allows people and groups to expose the lunacy and “utter madness” of their ideas and beliefs. On Monday night you and your fellow speakers, Christina Hoff Sommers and Steven Crowder did just that.