“It’s On Us”: UDel students rally against sexual assault and harassment

“Let’s all create an environment where we both support survivors and make sexual assault unacceptable.”

“It’s On Us”, a social movement created by Barack Obama and White House Council on Women and Girls, officially came to campus on Thursday, May 4th. The movement hopes to raise awareness and fight against sexual assault on college campuses for both men and women. The cause has been publicly supported by former Vice President and UDel alum, Joe Biden.

With everyone’s favorite Blue Hen praising the cause, it was no surprise that the rally was given a warm welcome on campus. One of the organizers, Samantha Leonard (sophomore, Human Services major with a Clinical Concentration) said she wanted the rally “to be a safe space for students to come together, be present, listen to others and share their own stories” and she was proud to have been a part of achieving that. She worked with Natalie Criscenzo (junior, Energy & Environmental Policy and Public Policy double major) and UD’s “It’s On Us” campus representative, Harry Lewis (junior, Political Science major). Criscenzo was also proud of their event, especially the “excellent and empowering” speakers of the day.

As for the future of the “It’s On Us” movement, Leonard hopes “the rally can grow every year and have a more diverse array of speakers and audience members.” She also encourages everyone to take the pledge to stop sexual assault and raise awareness on college campuses; “let’s all create an environment where we both support survivors and make sexual assault unacceptable.” Criscenzo challenges everyone to go beyond simply taking the pledge and “actually follow through with it . . . Most importantly, be an ally and supporter of survivors of sexual assault, and believe them.”

The rally took place just days after Sexual Assault Awareness Month, which brought its own public demonstrations to campus. There were clothing displays in various locations on campus that portrayed what the victims of sexual assault were wearing, captioned with quotes and #whatIwaswearing. They were organized by Cara Tortorice, a graduate student in the Department of Fashion and Apparel Studies. 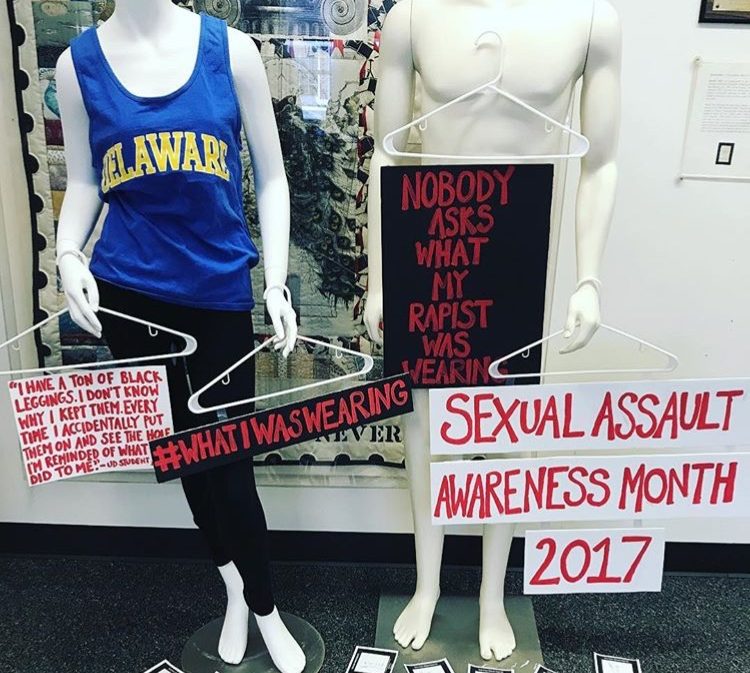 Both the rally and the clothing displays were particularly relevant for students, especially after three separate incidents of sexual harassment were reported just weeks ago. While the university does provide a number of resources to the victims of sexual harassment or assault, it is reassuring to see students taking action to stop those acts from ever occurring in the first place.