How establishment Democrats made Trump president

And are now blaming third-party voters, the FBI, and everyone except themselves

What started off as a sinister joke has come around full swing and here we are. Donald Trump, a man who once tweeted this:

The concept of global warming was created by and for the Chinese in order to make U.S. manufacturing non-competitive.

will be president of the most powerful country on Earth. Brave new world.

The country has descended into hate crimes and protests, and everyone is looking to point fingers.

Suddenly, third party voters are no longer being told they threw their votes away. Rather that they helped to elect Trump. Trashing third parties is an old Democrat tradition. Ralph Nader has given writers who lack creativity a convenient target for 16 years now, though his effect on the 2000 election is arguable to say the least.

Hillary Clinton is now blaming the FBI. Perhaps investigative reporters are to blame? Or maybe we should ask how Trump could have won with his historic unfavorables, shakey ground game, and lack of filter.

But before anything, the Democratic National Committee needs to admit to their own role in the debacle. 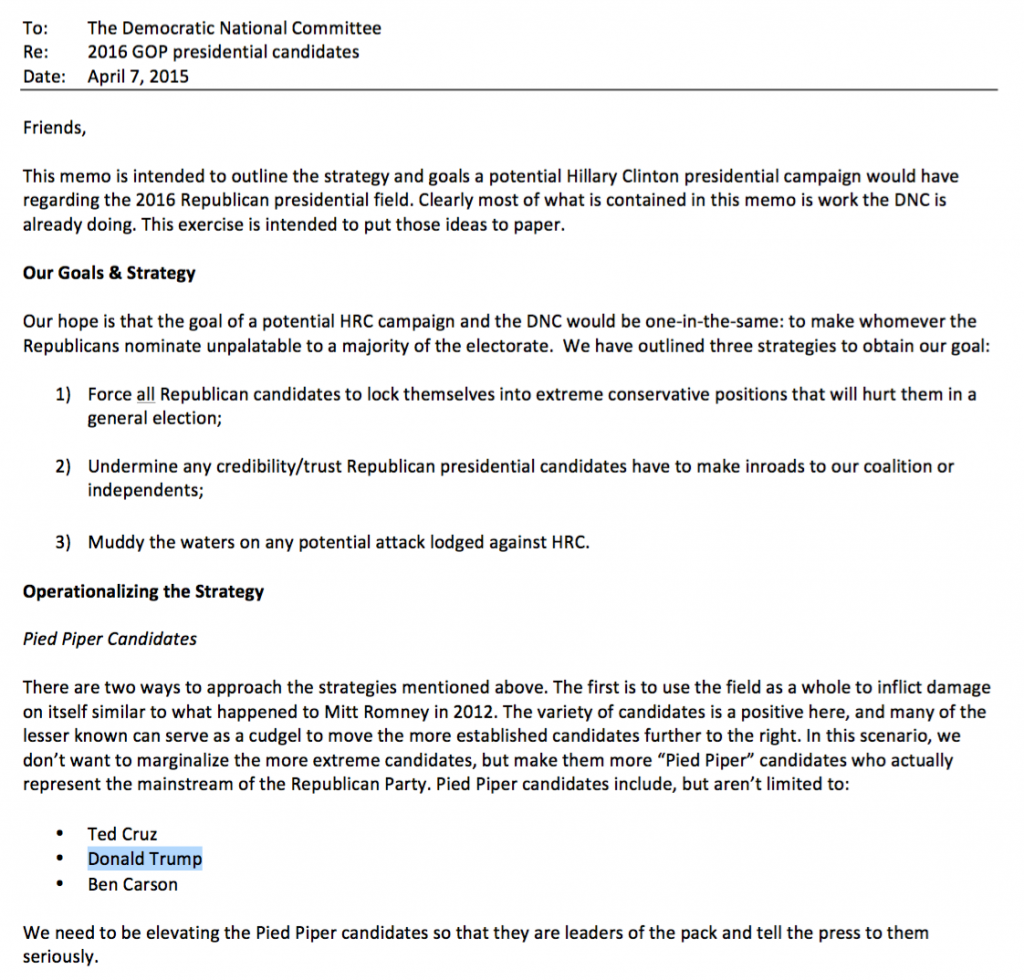 Tell the press to take “pied piper” candidates seriously? Could that have something to do with the two billion dollars worth of free media coverage Trump received during the primaries?

It should be noted that Clinton’s campaign is virtually indistinguishable from the DNC. They even allegedly started a joint bank account as early as July 2015, despite claims of DNC neutrality in the primaries. Debbie Wasserman Schultz, campaign co-chair for Clinton’s 2008 run against Obama, was the DNC chair before stepping down in late July, after continued allegations of pro-Clinton bias and calls for her resignation.

Emails released by Wikileaks have revealed just how friendly Clinton’s campaign was with so-called reporters. The press even had dinner parties with Clinton’s campaign manager John Podesta. Perhaps it was this coziness that allowed the DNC to help write Wolf Blitzer’s questions for an interview with Trump.

There is also a worrisome degree of camaraderie between Podesta and John Harwood, who moderated a GOP primary debate in Oct. 2015. 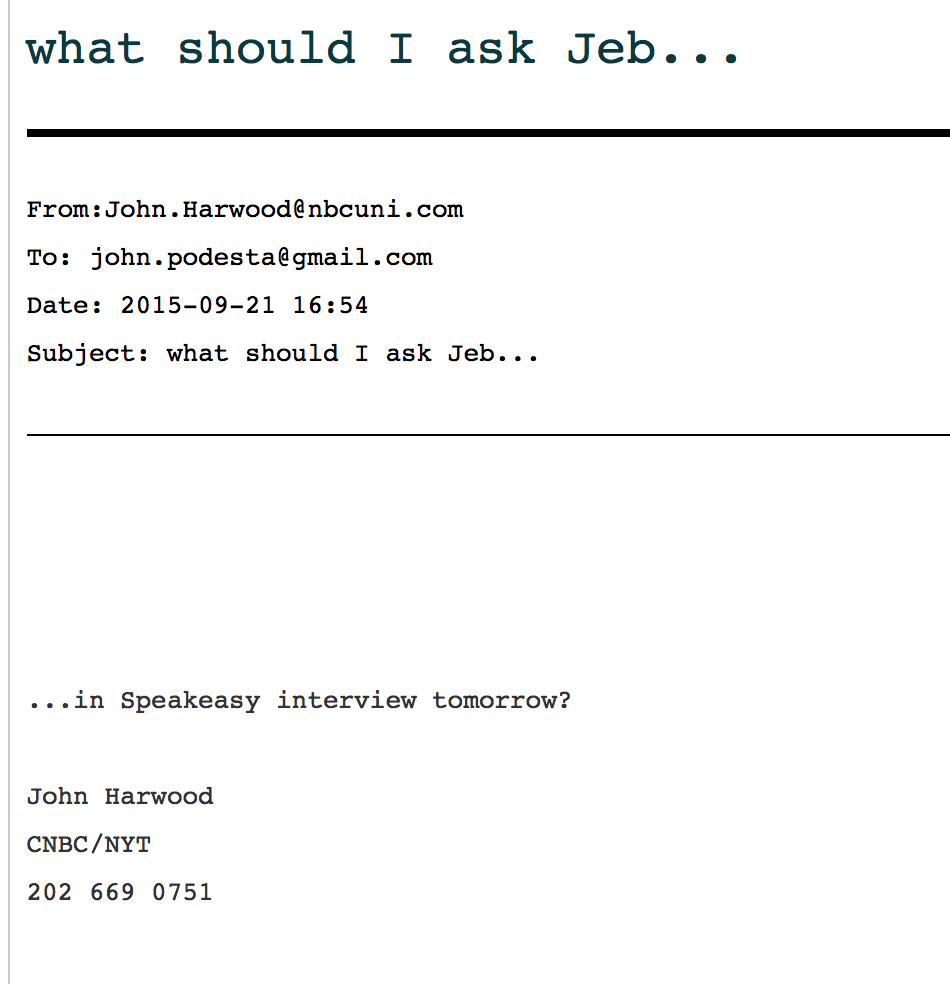 This election wasn’t just a loss for Clinton. Republicans also held control of both houses of Congress, despite optimistic predictions democrats made for taking the Senate.

Perhaps that “enthusiasm gap” pundits kept referring to was deadly after all. While Bernie Sanders and Trump had no problem drawing YUUGE crowds, Clinton had to bring Bruce Springsteen, Jon Bon Jovi, and Barrack Obama out to see that kind of support.

It’s hard getting liberal voters excited about a candidate with Clinton’s campaign finance record, history of triangulation, and historic unfavorables second only to Trump’s. She’s the definition of a corporatist democrat without the smooth-talk. The DNC shoved her through the primaries without a second thought, all while pundits preached of her electability against Trump, despite what polls said.

The Clinton campaign claimed that Sanders had never been attacked, although the DNC and the media were attacking him from every direction.

Please read RE: the lie Sanders was never attacked.https://t.co/Ht0lTXYWxbhttps://t.co/fOs5jCgyc7 pic.twitter.com/A837Tby2l4

The DNC sent this rude email to Tulsi Gabbard after she resigned as vice chair of the DNC to endorse Sanders. The DNC, which, again, was claiming to be a neutral institution, cut her campaign funding as punishment. Is it any wonder she wants nothing to do with the organization?

Some ppl talking about possibility of me being DNC Chair. Unequivocally, I have no interest in that job. If offered to me, I wouldn't accept

Podesta and his crew wrote a hit piece, attacking Sanders’ gun record and had a victim of gun violence publish it on Medium.

They coordinated with super PACs and unleashed a million dollars worth of pro-Clinton trolls onto social media.

They obtained debate questions ahead of time on multiple occasions. Donna Brazil, who was briefly interim chair of the DNC after Schultz was forced to step down, has since been fired from CNN for her unethical behavior.

I went to the DNC protests and we were yelling at the top of our lungs that the democrats were electing Trump. Our pleas went unheard. 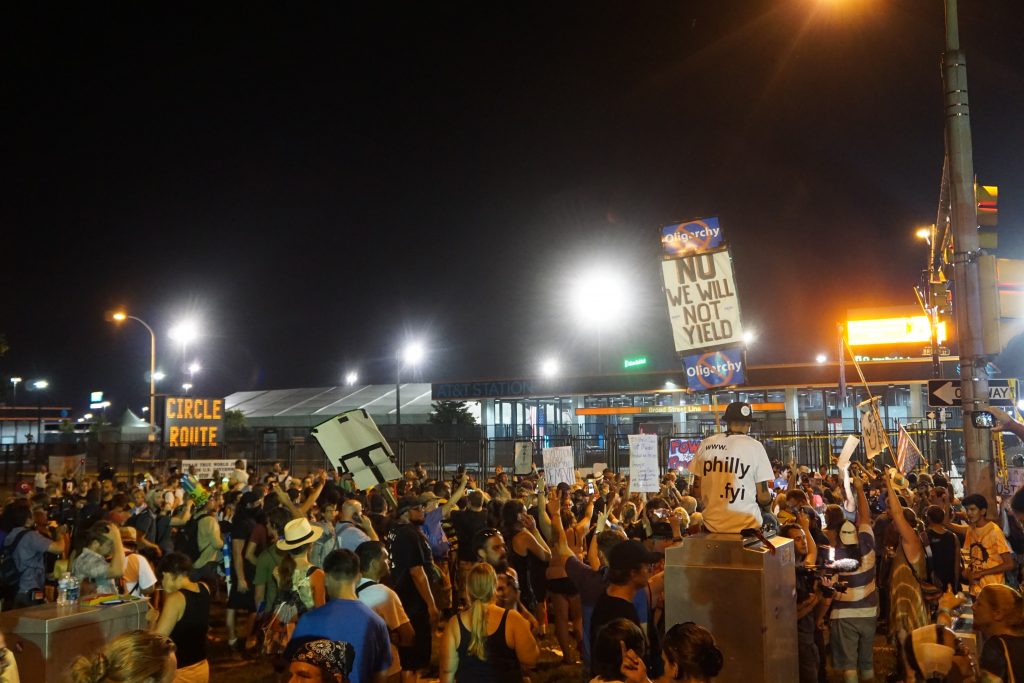 Running against literally the least favorable presidential candidate in history made the establishment democrats too comfortable.

It was Clinton’s turn. She had waited patiently since 2008 and this time she was virtually guaranteed the White House. And her arrogance showed it. She selected Tim Kaine as her running mate, despite his pro-TPP stance. After all, her donors on Wall Street threatened to cut funding if she chose a progressive like Elizabeth Warren.

Meanwhile, Obama was busy pushing the Trans-Pacific Partnership, which couldn’t have helped with working and middle-class voters. He further scorned activists with his weak response to the North Dakota Pipeline.

Clinton highlighted her relationship with Henry Kissinger, who is considered a war criminal by anti-war groups, and courted neocons throughout her campaign, alienating the anti-war left. She didn’t need their votes when her opponent was Trump.

As a great president once tweeted: “BAD!”

Clinton's Super PAC spent $700,000 more for online trolls than the whole of the DNC spent on Latino voter outreach pic.twitter.com/wi2ASYt9BU

This isn’t even getting into the democrats’ historic abandonment of the working class.

Despite the historic upset and wipeout in congressional elections, Clinton allies are slow to address the real issues that lead here.

However, there is hope on the horizon – hope for at least some change inside the party. Progressive Keith Ellison and lobbyist Howard Dean are both being considered for the DNC chair; an open experiment which will show how much the democrats have learned. 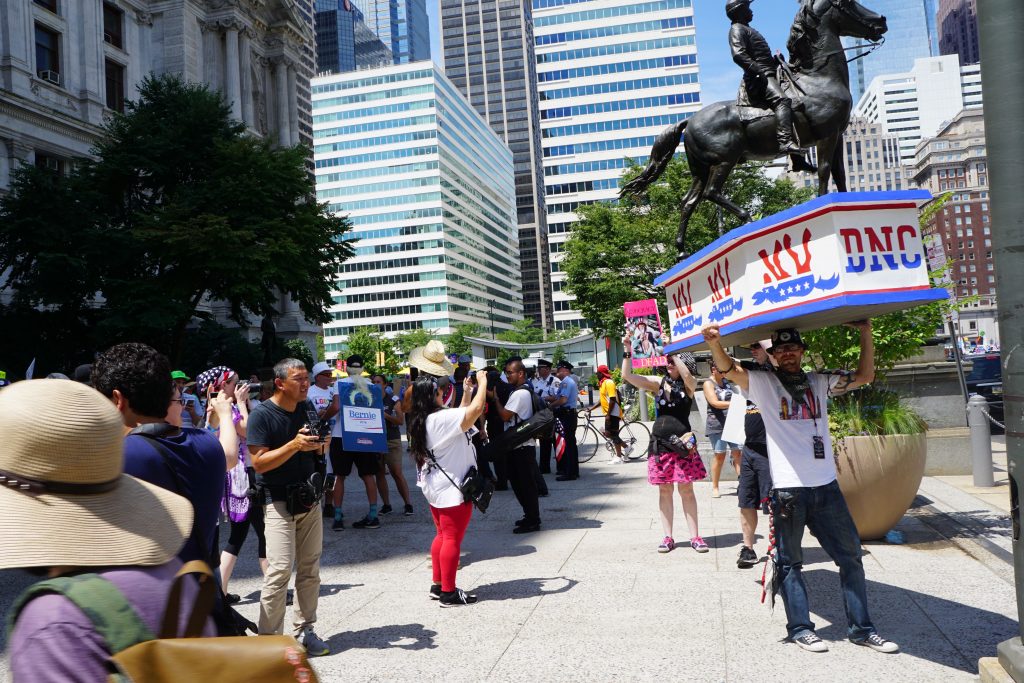 Make no mistake: there is an ongoing battle for the very soul of the democratic party, and it will determine whether Trump is a single-term president or not. Brave new world.