I am a woman, and voting is not my God-given right

It was given to me by my own people

This election season has been one of the longest in history and thankfully it will soon be coming to a close. As a 21-year old female citizen, this is the first presidential election that I am able to participate in, and while I do not live in a swing state I take my responsibility as a voter very seriously.

I have considered every candidate, some with a scoff and some with admiration, and have even thought about just not voting. As naive as it may be, I want to vote for someone who I wholeheartedly believe in – the perfect candidate – but this election is causing my optimism and sunny demeanor to waver.

Are we “stronger together?” Or are we going to “make America great again?” Are we going to make history by electing our first female president? Or are we going to push ourselves back years of progress by electing someone who brags about sexually assaulting them? The laundry list of reasons to vote goes on for miles, but they are completely amplified in this election.

America boasts our right to vote as one of the many aspects that makes us one of the greatest countries in the world. The word “vote” is interchangeable with clips and phrases like “privilege,” “responsibility,” and “God-given right.” And while I am extremely appreciative of my right to vote and can recognize that had I been born in a different time and place that I would be stripped of this right and so much more, I am all too aware of the fact that God did not give me this right.

Susan B. Anthony, Alice Paul, Elizabeth Cady Stanton, and all those who fought, protested, and suffered jail time gave me my right to vote.

Susan B. Anthony was never able to vote, so women are leaving "I voted" stickers on her grave in Rochester. pic.twitter.com/ilBUwvJqns

It was less than 100 years ago when the 19th amendment was ratified to decide that women were competent enough to vote. Women’s rights have been a long drawn out battle that we are still fighting today. The fight for women’s rights is believed to have first been sparked in America in 1776 when Abigail Adams wrote in a letter to her husband to “remember the ladies” while fighting for America’s independence. It was not for almost 150 years after that, that women were just beginning to be seen as equal citizens.

Women flocked to the white house to protest, and not only were they arrested but some were even attacked by those who so badly wanted women to fit their mold. Even though the police allowed this abuse and did not protect both the protestor’s safety or their first amendment rights, suffragettes continued to put themselves in danger to openly question our nation’s ideals.

Then more punishment. Eventually women were jailed for protesting, a clear violation of our first amendment right. They became political prisoners and endured six month sentences, but still, they were steady. 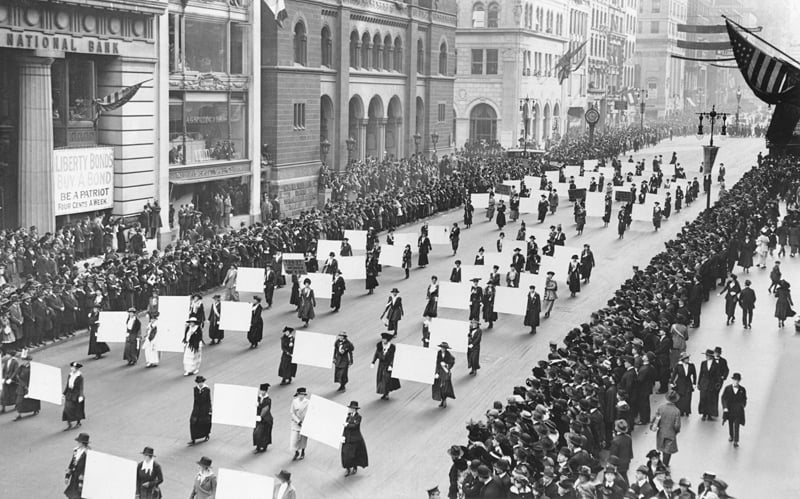 Alice Paul and Rose Winslow then launched a hunger strike, still protesting from inside the walls of a cell. The hunger strike spread, and the fight was more ferocious than ever. The prisons began force-feeding women so that they would not become martyrs, a practice which most medical groups like Red Cross have labeled as torture.

The 19th amendment’s ratification was finally bestowed upon us in 1920, and yet somehow in 2016 it is still being called into question. After Donald Trump’s son tweeted a picture of a map of the United States that only took a man’s vote into account, #repealthe19th started trending on twitter. The map showed that if only men voted Donald Trump would be the clear winner of this election, and so his supporters were quick to back anything for a victory. 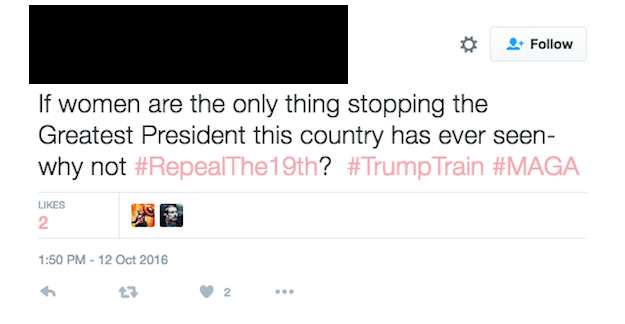 A women’s right to vote is something that did not come easily, but is so often taken for granted. It is lumped in with a man’s right to vote, but I am not a white man and I am still not seen as an equal in the society that I live in. The patriarchy can debate what I can do with my body, give me seventy-eight cents to the dollar, but they cannot make themselves feel better by calling me an equal.

This is why women should not be allowed to vote. This video of a weak woman crying is being touted as why Hillary should win. #RepealThe19th pic.twitter.com/DRCJfsWfA4

So please, do not simplify my ability to vote by calling it my “God-given right,” because this is a right that was given to me by my own kind.