On Thursday, May 4 a collaboration between Students Supporting Israel, UCSB Hillel, and Artists for Israel constructed a mural on the UCSB campus promoting peace and dialogue concerning Israel.  The wall was vandalized twice within five days, the first incident in under twenty-four hours from when the wall was constructed.

It is unclear at this point who is responsible for the graffiti. 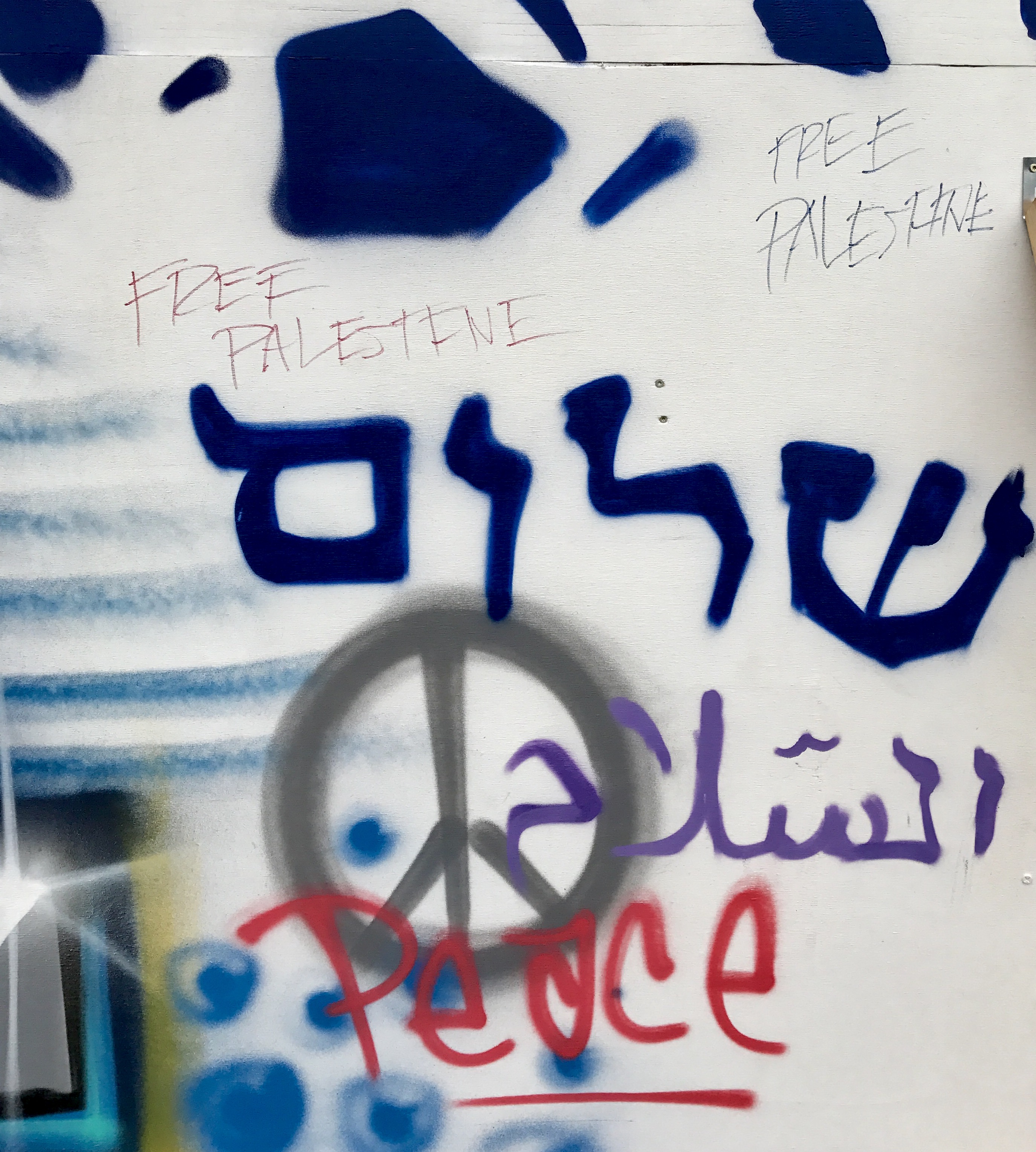 The vandalism on the mural. The mural has the word ‘peace’ in Arabic, Hebrew, and English, now with ‘free Palestine’ graffitied over it

In an official statement released by Students Supporting Israel (SSI) to The Tab they said: “We are deeply saddened and disturbed that someone would deface our artwork that simply says the word ‘Israel’ on it along with positive peaceful messages of coexistence.  We want to live in peace and have a dialogue, and it’s saddening our opposition would criminally deface our artwork.

“The purpose of the Artists for Israel event and our Israel Peace Week as a whole was to promote peace and coexistence, and it is disappointing some on this campus feel compelled to vandalize this message.

In the Students Supporting Israel Facebook post describing the incident, they stated that, “The anti-Israel, anti-Semitic Apartheid Wall was made 12 years ago and has survived traveling to many campuses. Our pro-peace, pro-love wall was vandalized twice in 5 days.”

According to Students Supporting Israel President Nate Erez, a fourth year economics and accounting major, “Our goal above anything else is the goal of all Israelis and all Palestinians, and that is for peace.  We are trying to spread a positive message through art.  We are just trying to show UCSB who we are and that we are not this crazy evilness that Students for Justice and the wall in the Arbor would lead people to believe.  We want peace, we love peace, we want to coexist, we are pro-Israel, we are Zionists, we are pro-Palestine, we are pro peace and we are trying to show that through art.” 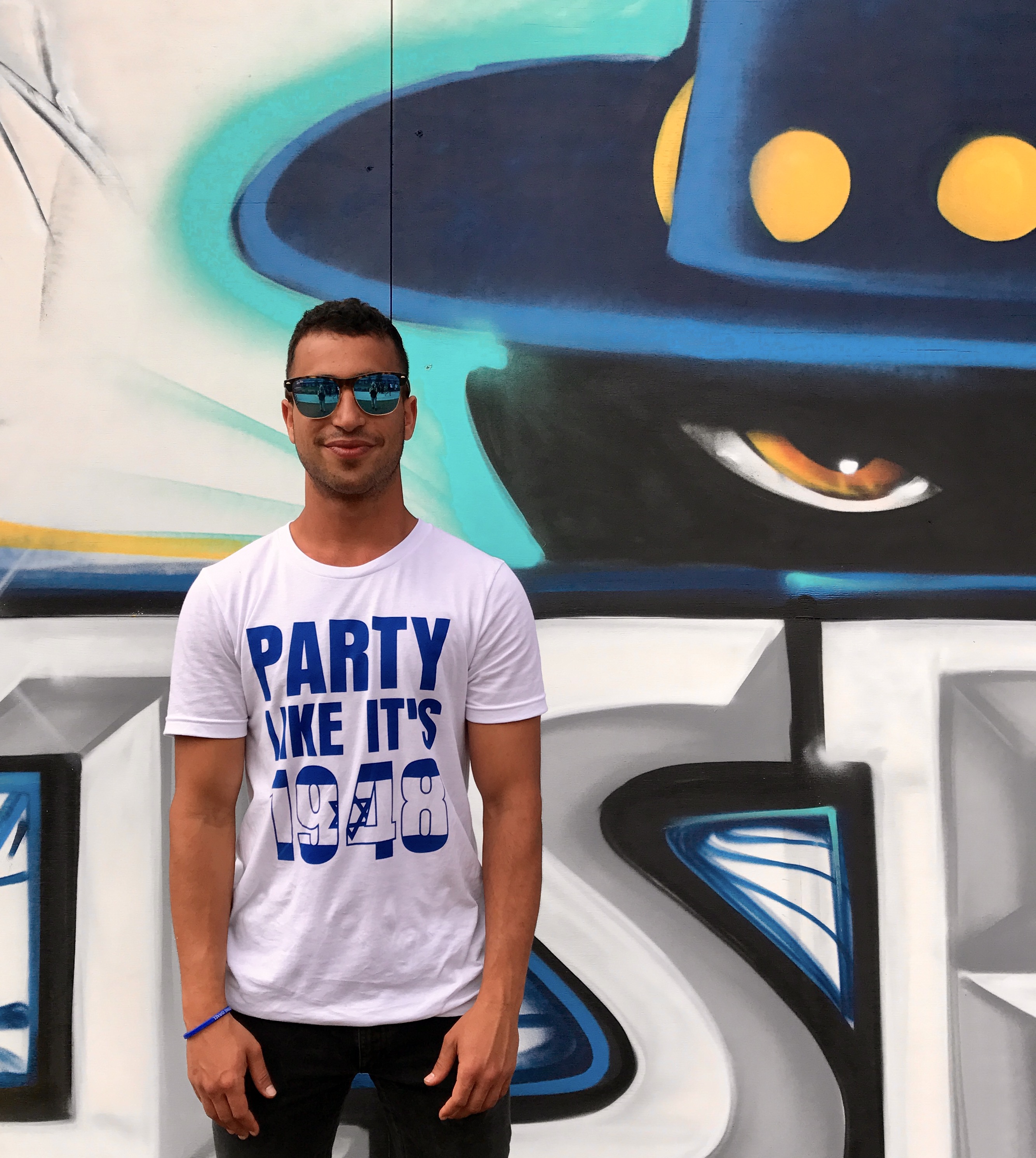 The mural was painted by an organization called Artists for Israel, who have the primary goal of “spreading awareness for coexistence through the use of art,” Erez said.

“The theme of the artwork is that instead of demonizing one side and talking about all of the crimes committed by one side, because no party is innocent, let’s spread a positive message of coexistence, unity, and love. Let’s work together and let’s have a dialogue and not paint either side as a horrible entity. Let’s respect each other’s right to exist and live in this world together.” 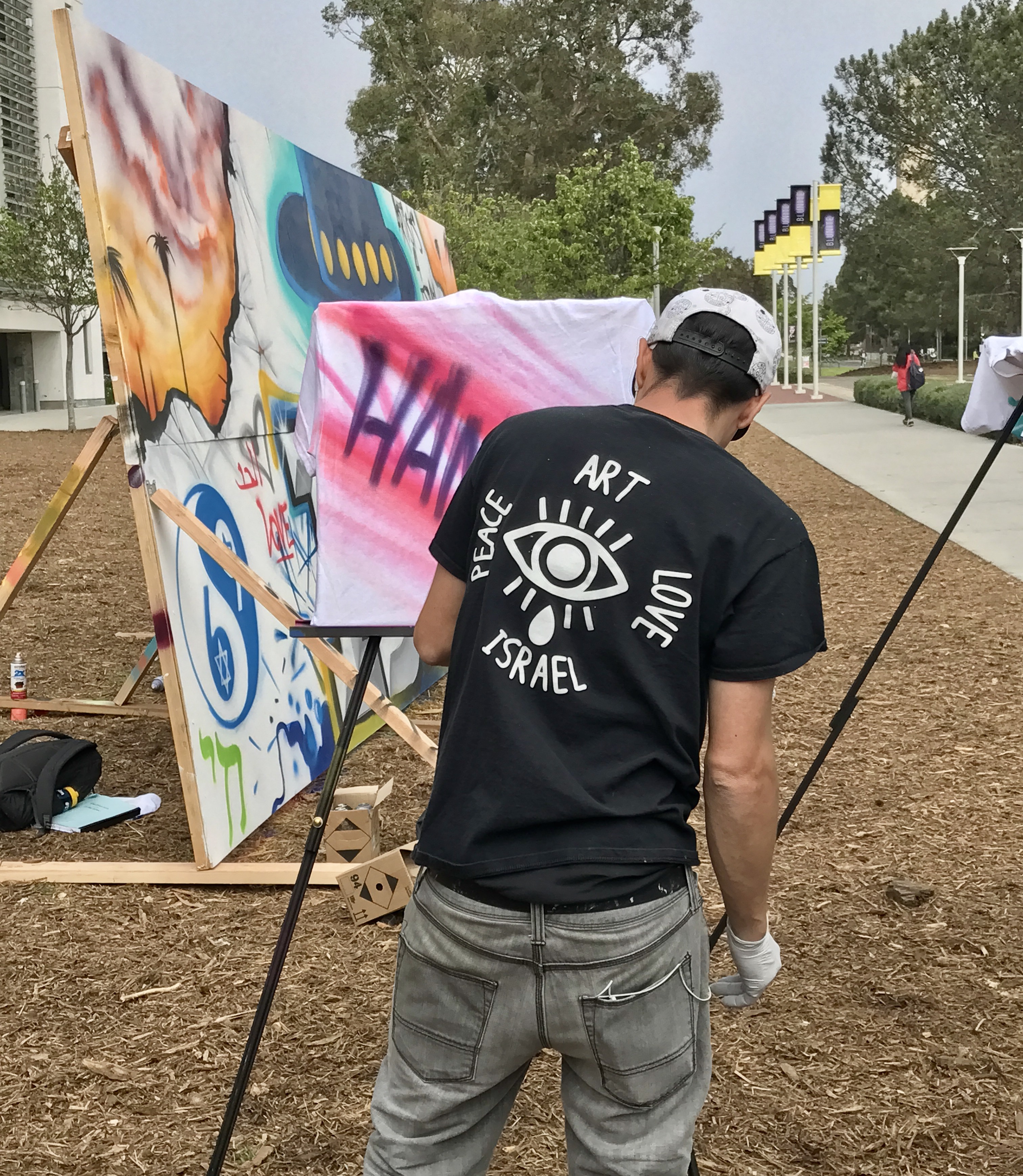 When asked if the mural was a counter against the wall in the Arbor, Erez replied, “no, we actually planned this event, Israel Peace Week, before we knew their wall was coming. This is not a counter at all, but we are using it as an opportunity to talk to people who are interested in talking about it because a lot of people are here and the see ‘Israel’ and they ask us about out feeling on the wall. We are using it as an opportunity to spread awareness about our perspective.”

According to Erez, “I think it is pretty obvious the contrast in our messaging [compared to the wall]. Here we have something that is bringing people together, and we are out here having a good time with music and spreading messages of peace, unity, and love, and not using it as a time to play the blame game to spread hate. [On the wall] there’s a lot of inconsistencies and fabricated quotes, fabricated images, and denial of the existence of Israel as a Jewish state, and here we are trying to show what our perspective on what a path to peace looks like, and that is bringing people together through something universal, like art.”

In a statement given by Shirel Benji, a first year sociology major involved in SSI, the purpose of the wall was to, “promote peace, positivity, and to bring optimism to campus this week, especially with things regarding Israel. There has been a lot of tension with the wall that was put up in the Arbor this week that does not paint Israel in the best or most truthful light. We are not taking a stand, we are saying through art that there can be peace and happiness when it comes to Israel.” 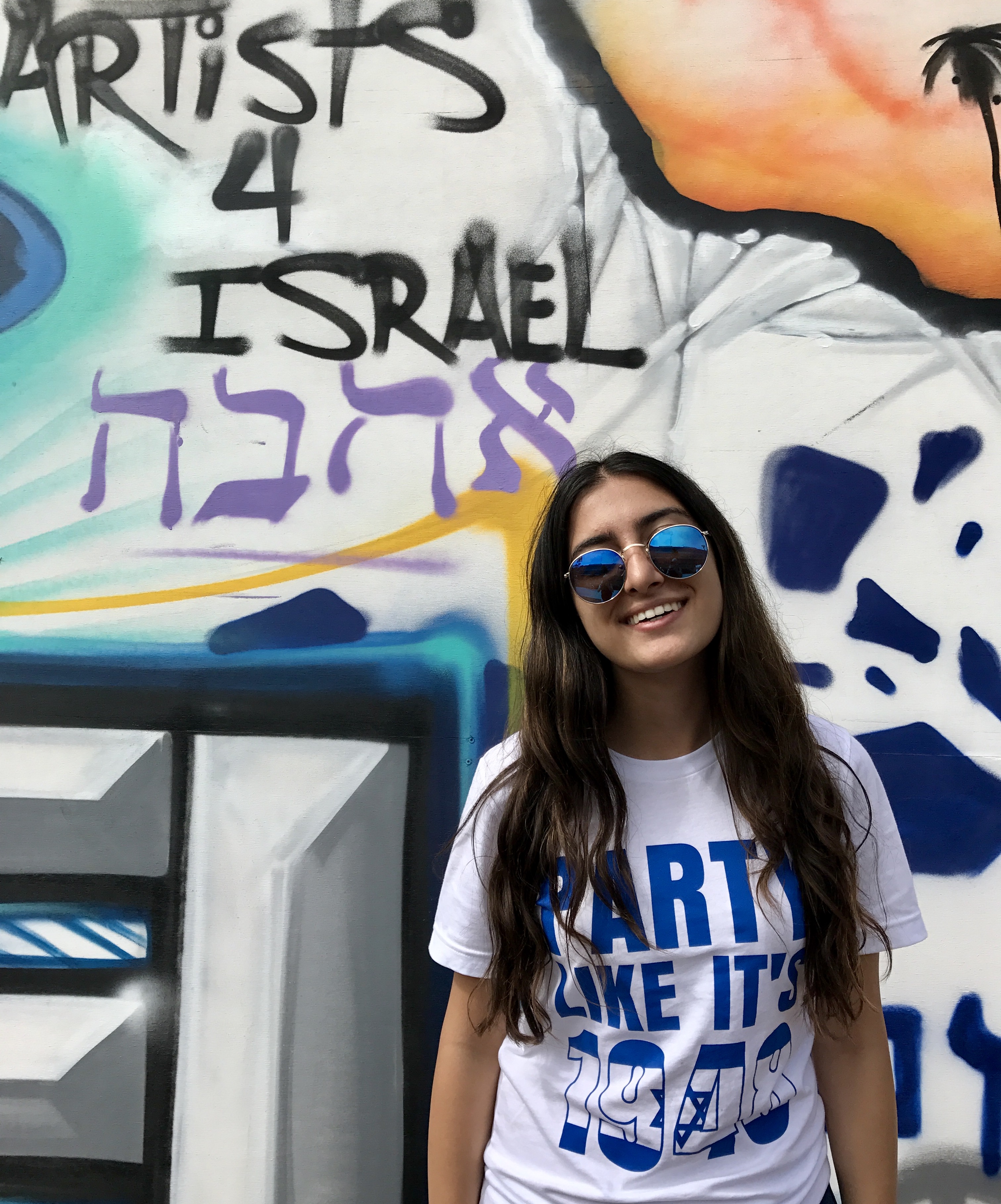 Shirel Benji with the mural

According to Benji, “As a first year, the wall made me feel really targeted and intimidated. It is so huge and we are forced to walk through it every single day. There’s a bunch of misquotes and facts that are out of context that would make people feel a certain negative way towards Israel. As a Jewish student, I want to feel like a can represent Israel in the best way possible and make people understand that there might be more to the story.

“Israel is the only democracy in the Middle East. One of the first prime ministers was a woman. Our own country [the United States] has not even had a woman president yet.  We should be celebrating Israel.”

According to Erez, “I encourage people to  really reach out to both sides, ask people how the feel about SJP’s wall and people who are Israeli or identify as Zionist, or people who have bad feelings for that wall, ask them why.  Don’t just turn this into a divisive issue.  We need to talk to each other.  Look at both perspectives, reach out to both sides, do your own research, and don’t jut take everything on that wall for face value.” 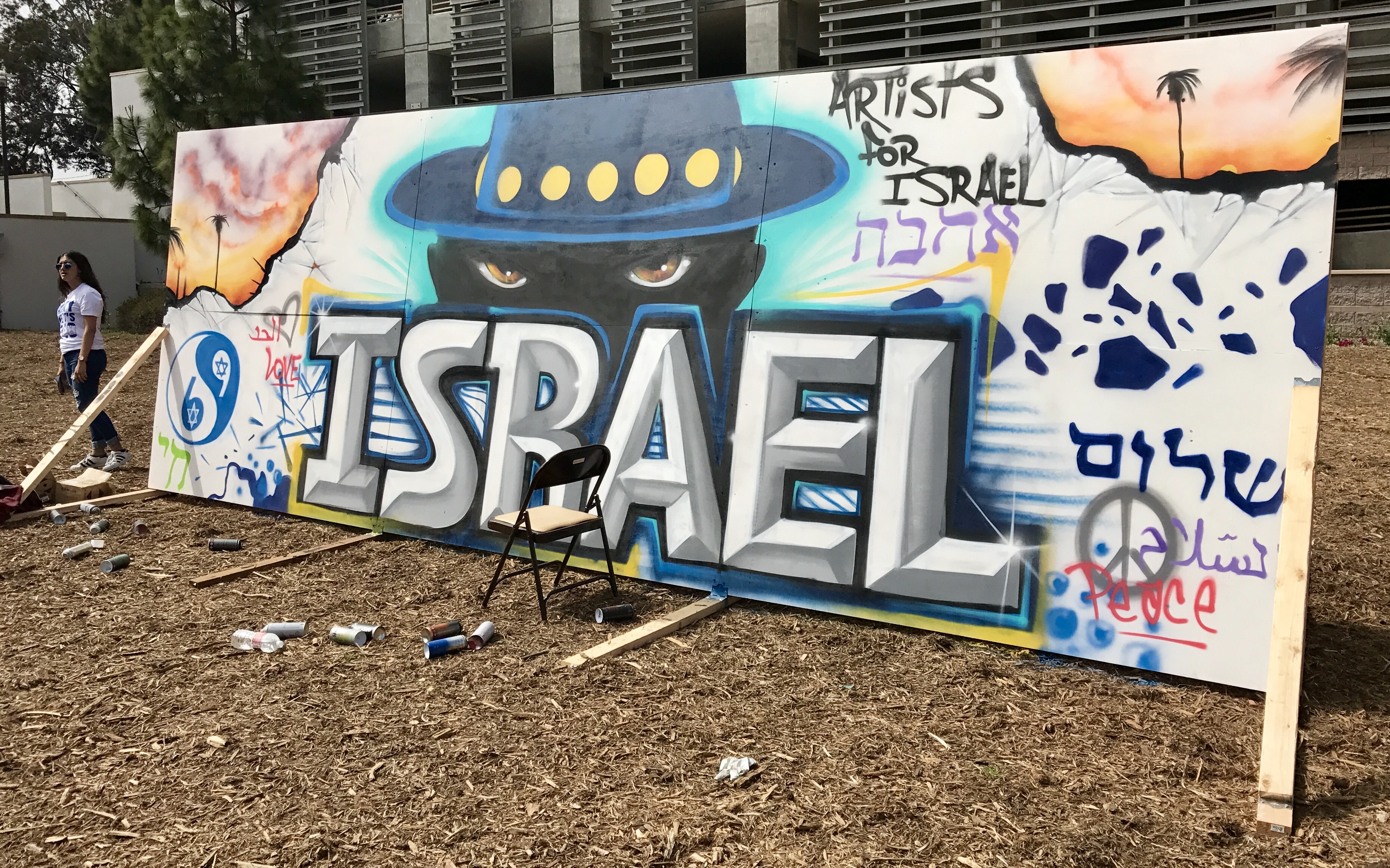 The mural as it was being painted

The mural will be restored and will continue to be displayed on campus.

UCSB Divest and UCSN Student for Justice in Palestine, the groups responsible for the wall in the Arbor, had not responded to a request for comment at the time of publication.