‘Your student fees go to my party bus’

The AS Presidential candidate running with the Isla Vista Party, Nawar Nemeh, has been accused of misuse of Associated Student funds and unpresidential conduct after an anonymous email was sent to The Tab by someone who identified themselves as “Concerned Gaucho.”

The email also contains a personal Snapchat of Nemeh’s that surfaced on April 25 on a Facebook Free or For Sale Page for a brief amount of time before being quickly removed.

Concerned Gaucho begins the email: “Nawar Nemeh, the presidential candidate running with the Isla Vista Party, was a former AS Senator and Chief of Staff in the Student Advocate General Office before he quit both positions halfway through his respective terms.”

According to the email, “[Nemeh] believes that AS fees should not be targeted for reduction or attrition. This is in light of the fact that ASUCSB has the highest student fee tax out of all of the UCs, at more than $200 a quarter. That is $600 a year. Nemeh is out of touch with this issue. In his presidential forum on Monday, April 17, he stated that UCSB students ‘only pay $200 a year’. A gross mistake — UCSB students pay three times as much as that.”

Concerned Gaucho then provides concerning the Snapchat that had been previously posted on Free or For Sale, stating that, “To show how further out of touch he is, Nemeh posted a story on his Snapchat Story earlier this school year (August 12, 2016) during the UCSA conference that shows inappropriate use of fees. He is pictured with Marjan Abubo, a former AS Senator, in a dark room. Nemeh’s caption is “Your student fees go to my party bus” This is either a blatant misuse of funds or an inappropriate joke in light that UCSB fees pay into the UCSA conference more than any other campus.” 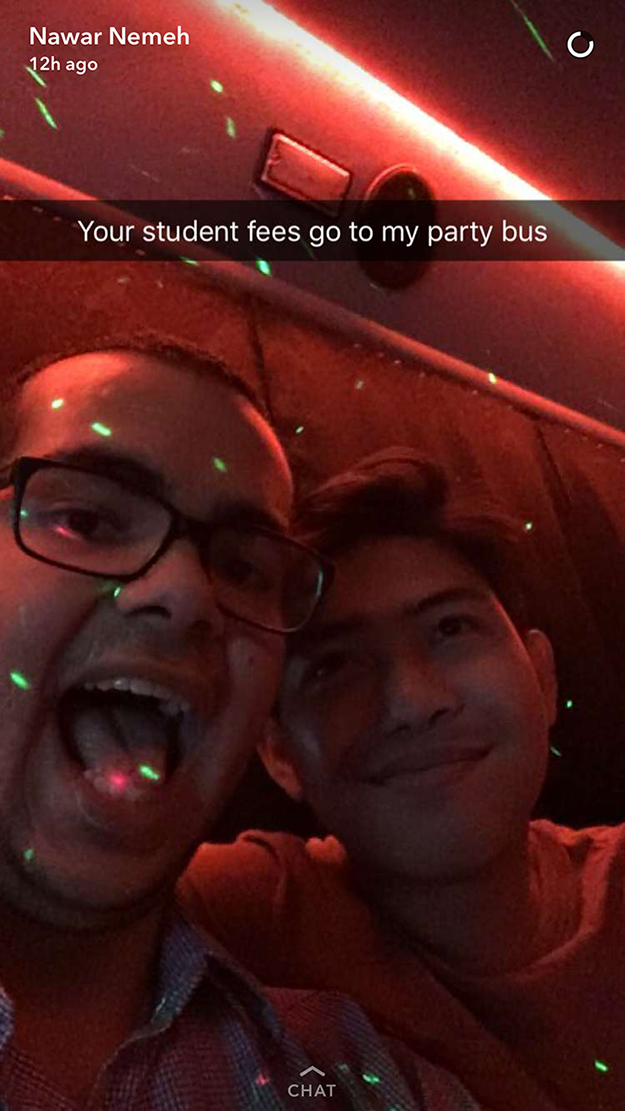 In an exclusive interview with The Tab UCSB, Nawar Nemeh said: “I just find that it is a very timely email that was sent. It seems to be directly attacking my candidacy and I don’t appreciate that at all. It sound like it is trying to connect something that really isn’t there.”

When asked about him leaving his former positions as AS Senator and  Chief of Staff in the Student Advocate General Office, Nemeh said that the allegations were “not at all” true.

Nemeh also justified his statement at the AS Presidential forum by saying, “student fees that go directly to AS are about $200 a year, because most of your student fees do not go directly to AS. They go to things like CLAS, CAPS, and other services outside of AS. They are actually earmarked, AS can’t really touch them.

Concerning the Snapchat, Nemeh did admit that it was his Snapchat taken from his personal Snapchat account.

According to Nemeh, “That statement [in the Snapchat] is a joke. That ‘party bus’ was not an actual ‘party bus.’ It was a bus to take people to dinner that had cool lighting on the side. It was not paid for by student fees, we personally pooled in together to pay for it because we knew we need the bus to go to dinner in downtown Irvine. So we went there to dinner and we made joke about it on Snapchat.

“The delegation to this conference was lead by people from the other party [Campus United], not myself. So if any decision were made about purchasing anything on that trip it was not made by me, I was simply a delegate out of 85 people. I was one person of 85 people who did not make decisions on where we were going for dinner, what transportation we used, what workshops we were attending, nothing of the sort. That delegation was actually lead by Kristen Hsu, which is the current candidate for EVPSA for Campus United. So if anyone is to blame and anyone should be investigated for misuse of student fees it should be her, not me.

“I do have to be honest, I have been threatened by this before. I knew this was coming because they blackmailed me with it. They told me, ‘we will release thi’” because they knew I had something else on them and they thought I was going to release it. That is also why I think it is stretch, because they don’t actually have anything on me. They tried to construct something that really is not real or valid.”

In an exclusive statement to The Tab, Concerned Gaucho said: “I have no comments to make, except that student fees are a huge problem for AS. Simply put, AS is not providing the amount of services relative to other UC campuses who pay less in fees.

“Part of the reason why fees are so high is that UCSB accounts for a large part of UCSA and USSA’s budget, which help fund conferences, such as the one Nawar was in. UCSB pays more into this — in fact, more than a third of its budget despite only representing 1/9th of its membership. If a party bus was indeed rented, UCSB students paid for it, and I don’t think its appropriate for a president to be joking now uninformed about it. $200 a quarter is $600 a year. For me, that pays for almost of my textbooks and can pay for my food for the whole quarter.”

Update – April 26, 2017, 2:16pm PST: The Assistant Director for Finance and Budget at Associated Students, Cindy Lopez, confirmed to The Tab UCSB: “The EVPSA office paid for the UCSA Congress. Silverado Stages was the bus company that was used.”