‘Anyone can be victims of discrimination. We should all come together and stand up for each other’

In early January, Dyne Suh, a UCLA law student, made Airbnb cabin reservations for a trip to Running Springs. The booking was cancelled by the host at the very last minute, literally.

Suh had initially booked the cabin for herself and her fiancé, but later notified the host that she would be adding two additional guests and two dogs to the reservation. Once all changes were confirmed by the host, Suh and her friends were on their way, when the host decided to cancel minutes before they arrived to the cabin.

We spoke to her to find out more about her experience and how she has been doing.

What happened on that day the host cancelled?

We were on our way and we thought everything was good, and 15 minutes before arriving, I sent her a message asking her about how she wanted to us to pay for the additional guests and dogs. And she responded saying that there was absolutely no way she was going to take extra people and two dogs. 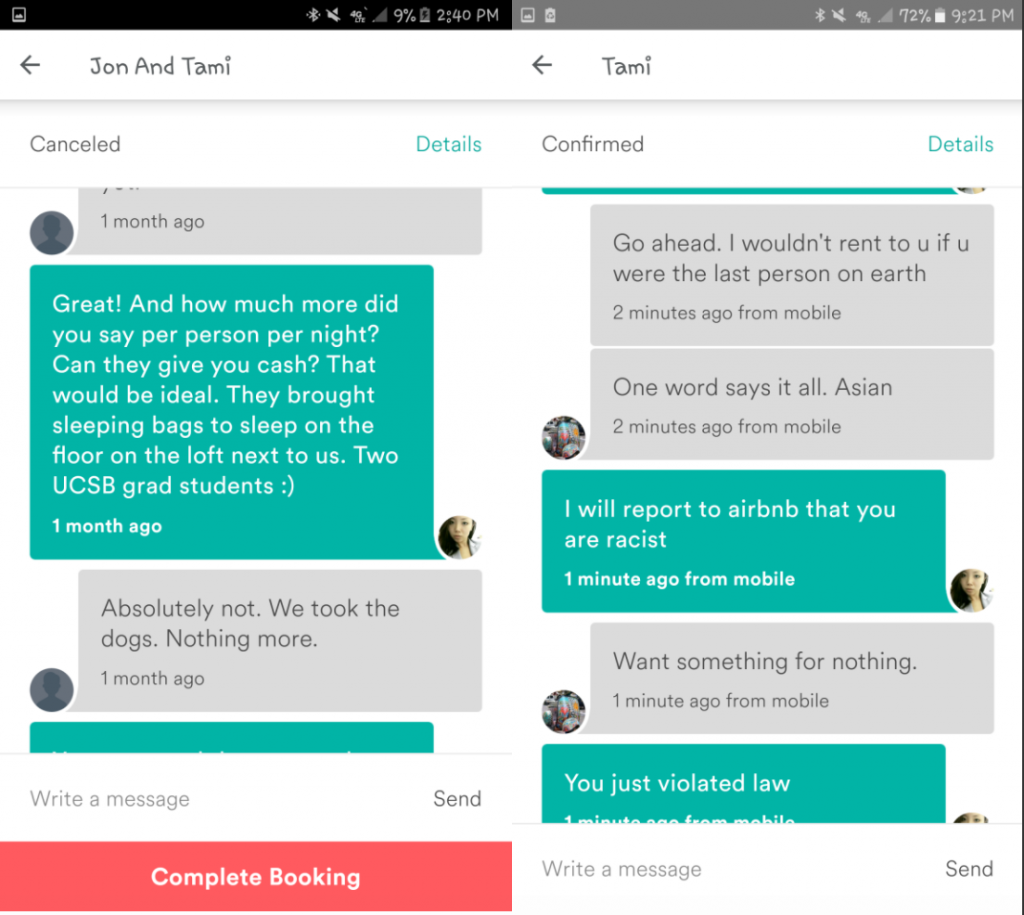 I thought she had just forgotten about the conversation we had in January, so I sent her a screenshot of her confirming four guests and two dogs. Then she started calling me a con artist, and saying that I must be extremely high. And I responded by saying that I will report her to Airbnb for misleading customers, and that’s when she said, “One word says it all. Asian.” 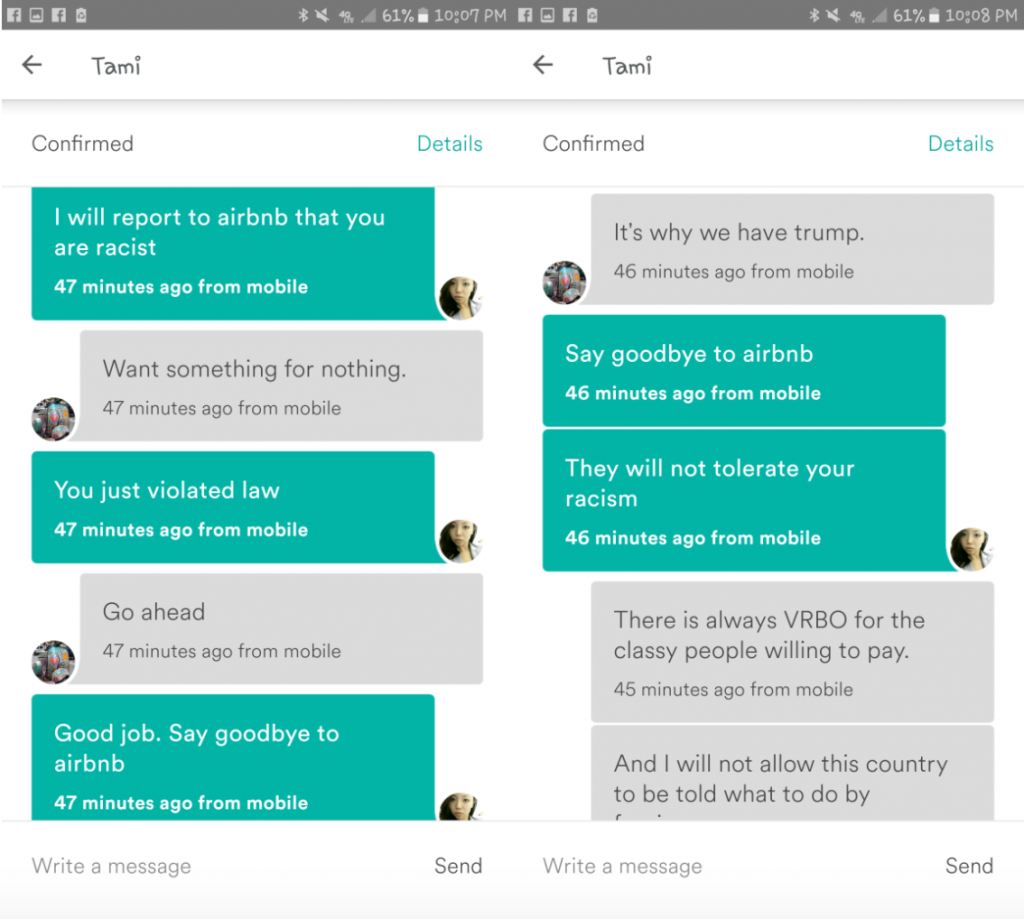 After that comment she continued to say things about my race, and how she won’t let this country be told what to do by foreigners, and that’s why we have Trump.

How did you feel receiving those texts?

I wasn’t very surprised with the racist comments, because it’s a common thing that happens. But in that moment I was really scared because we were in the middle of the snow storm. And this time, racism had put me and my friends in dangerous situation.

What happened after the host cancelled?

We were just three minutes away from the cabin when she finally cancelled, so we tried to find a safer place down the mountain. And we pulled to the side of the road to put on snow chains, where there was a news truck. And we got into a conversation with the people inside the news truck, which is how I ended by being videoed by KTLA about my Airbnb story. 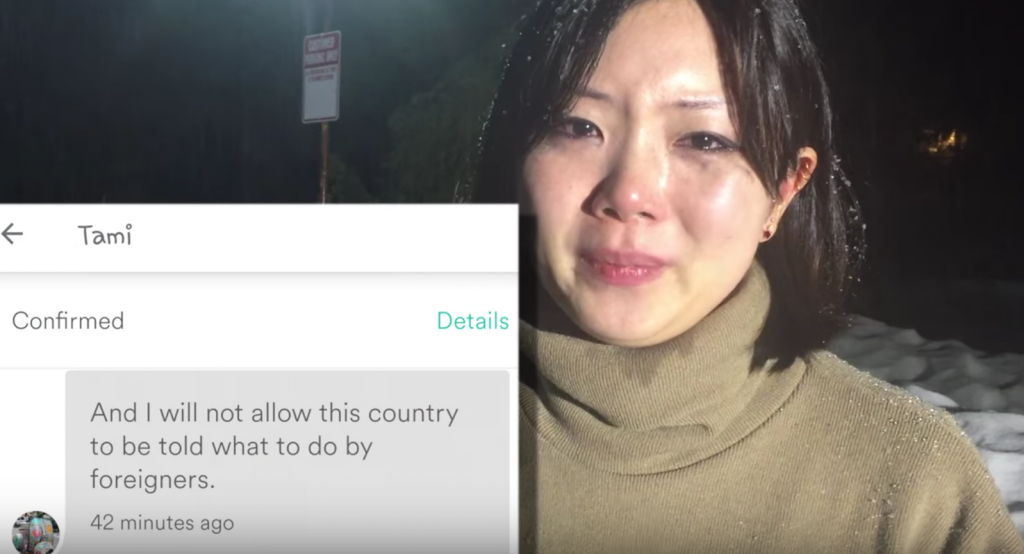 After talking to KTLA we found a hotel to stay overnight, and got another Airbnb, but this time we made sure we booked with my white friend’s Airbnb account so we don’t get into the same racial discrimination trouble again.

How have you been doing since the incident?

The media attention has been terrifying, and I was approached by many different medias that wanted to interview me. Although it is really stressful because I never anticipated any attention like this, I saw this as an opportunity to speak out against racism. Whether you are Korean, Chinese, or Indian, we should all stick together so that we get less preyed upon. And also beyond races, anyone can be victims of discrimination whether that may be in terms of gender, sexual orientation or disability. We should all come together and stand up for each other.

What is some of your advice to those who might experience a similar situation?

It’s really hard to prove racism in this country, and when we come out and say it happened, our experiences are denied by people. Knowing that people are going to deny our stories, it’s really important to take and keep evidence of it happening. Also you need to share your story, and I just hope that people will come forward.