On February 13, UCLA’s Daily Bruin published a cartoon depicting a vandalized page from the Old Testament in which “not” is crossed out in the phrase “Thou shall not steal.”

A cartoon of the Israeli Prime Minister, Benjamin Netanyahu, is also represented, shrugging his shoulder saying “#7 is next,” referring to deleting the “not” from the phrase “Thou shall not kill.”

The cartoon in question was a critique on a recent Israeli law, legalizing Jewish settlements on privately-owned Palestinian land. Concerns were raised by Jewish students who saw the cartoon as playing on anti-Semitic stereotypes.

According to a Facebook post by UCLA Political Science major and USAC President Danny Siegel, the cartoon claims that “the Israeli government is purposefully using [the] Jewish faith to justify a policy matter.”

He added: “This sweeping generalization and stereotyping targets my community and we ought to call it what it is and demand repercussions.” 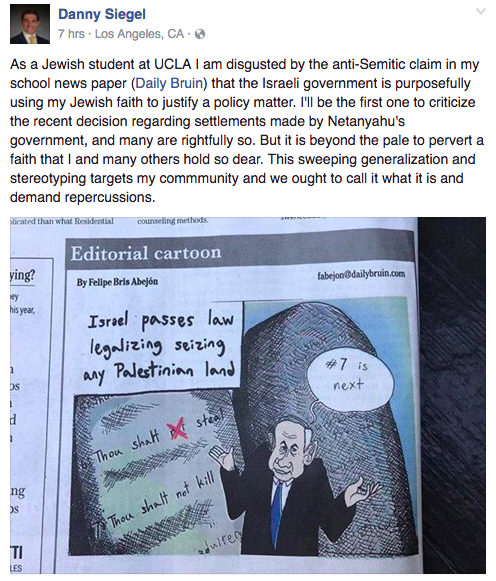 A comment by Ben Mandel on the original post explained: “The author seemingly intentionally mixed up the order of these commandments to suggest that Bibi Netanyahu is going to violate the Jewish commandment of stealing, and then what naturally will follow next will be the killing of Palestinians.” 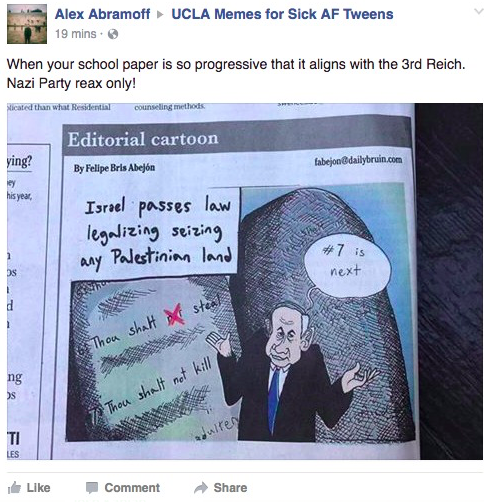 The Students for Justice in Palestine (SJP) submitted a response to the Daily Bruin at 5:30 p.m. on Monday, clarifying “the illustrator of the cartoon has no affiliation with SJP.”

“Although SJP has repeatedly condemned the policy of the Israeli government with regards to its oppression of Palestinians, it is not and has never been our intention to demonize the Jewish community.

“We recognize that caricatures of Jewish politicians and businessmen have been historically employed to emphasize Jews’ ethnic differences and imply their duplicity, and that this cartoon has made some Jewish students feel unwelcome and unsafe.

“Students for Justice in Palestine condemns the publication of this cartoon, as we condemn all efforts to perpetuate stereotypes about any racial, ethnic or religious group. We oppose all forms of bigotry and work to promote a world that respects the rights and dignities of all people.” 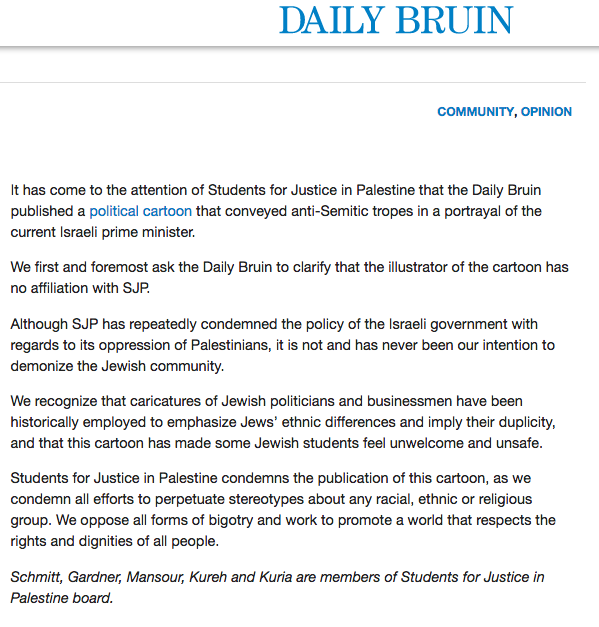