It’s not every day that the Westboro Baptist Church turns up to picket your campus and it’s not every student who can turn a hateful protest into an opportunity to raise and uplift trans people.

Luckily for UChicago, JT Johnson’s got our back. A second year and trans student himself, JT said that after hearing about the WBC adding UChicago to its “God Hates Trannies Preaching Tour” he immediately wanted to plan a counter-protest. 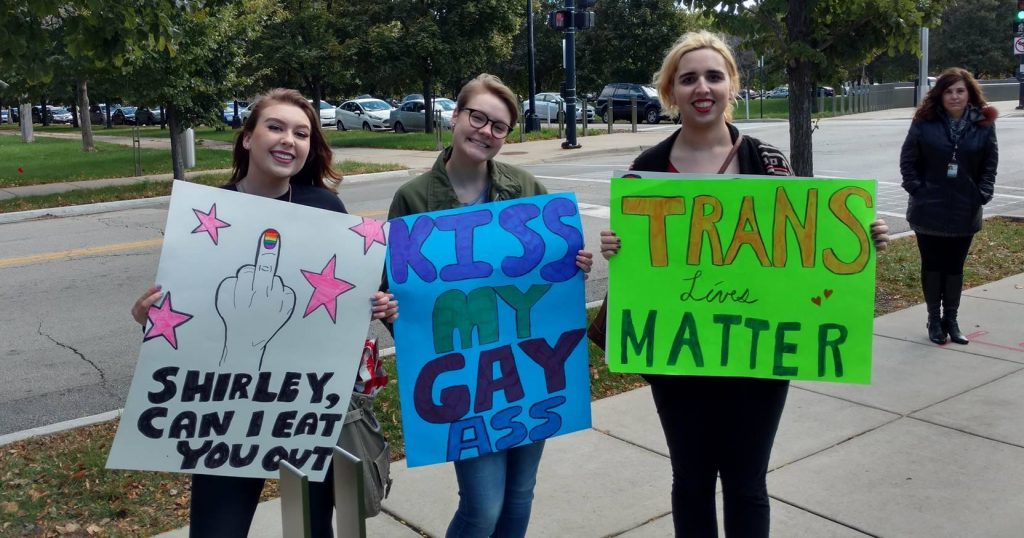 However, another group of students had already had the same idea, so not wanting to “hijack” anything, he joined the event page and watched as it, in his words, “went to shit”.

“People were making trans-insensitive jokes,” JT told The Tab. “When I tried to tell [the organizers] that this should be trans specific because [the WBC is] here on that whole tour to be transphobic… I guess they just didn’t want to hear that.”

A few hours after the original organizer made an insensitive comment, the event page was gone. Not wanting the whole counter-protest to fall apart, JT took matters into his own hands, with a clear plan of what was to happen. He came up with a route the counter-protestors would take, made signs and centered the event around trans people, as he originally thought it should be.

As the Organization of Black Students Action Chair and a member of the Chicago chapter of BYP 100, a black activist group, JT has been to protests, even helped to organize them before but he has never started one himself. Still, he had no trouble organizing this one. “This one was pretty simple to organize. I didn’t want to engage with them at all because they have the reputation of egging people on in order to get money out of them.

“I didn’t want it to get physical. I didn’t even want us to talk directly, like person-to-person, to any of them. So, I knew that I wanted that going in. I knew that basically, I just wanted us to be there to negate them being there.”

And negate they did, as on Friday afternoon, UChicago got to witness hate lined up across one side of 55th suffocated by the outpouring of love on the other. Appearing out of nowhere at around 11:30 AM, less than 10 WBC members began “to remix perfectly fine songs into trash.”

The first response to this ridiculousness came from Sunsarah of the Revolutionary Communist Party, or RevCom, who using a microphone she had brought fired back. “She just started talking about all of these issues.

“And of course, RevCom has to talk about communism every five minutes. Which was also not the purpose of us being there.”

Interjecting as politely as he could, JT borrowed Sunsarah’s mic to turn the event into an opportunity for members of the counter-protest, beginning a speech so powerful that a one of the Harper Café baristas interrupted our interview to comment on it.

“I really tried to uplift trans women, because they are pretty much under attack in this country, in this world honestly, and somebody has got to speak up for them always. So I always try to uplift trans women, particularly black trans women. I mentioned the hardships that comes with trans womanhood, how hate kills. Their bigotry, transphobia kills.”

When asked if he felt that the protest achieved it goals, JT said “I absolutely do… people who were there knew why they were there. The signs that were there, the things that people were saying, all of them were uplifting the trans community and I really appreciated that.”

In the future, JT hopes to help with further events to help increase trans presence on campus, although he has none in the works right now. Let’s hope that next time it doesn’t take a hateful protest to get UChicago students uplifting the trans community.