They literally ran away

Today, the WBC made their way to the UChicago campus after making their mission clear before they launched a series of new protests in the Chicago area. However they weren’t around for long.

Next to a very tasteful “people whom God has cast into hell since you loaded this page” ticker online, the group cited their specific reasons for coming to UChicago, including gender-neutral bathroom policies and, our favorite, “a handy list of bathroom options in each building on campus.”

WBC outlined their reasoning for appearing at UChicago online

Their website says: “The young people attending America’s universities are aggressively brain-washed to think God’s commandments are up for discussion and are a matter of personal preference instead of being absolute and eternal.”

This didn’t go down too well at UChicago though, as a number of counter-protests popped up  to counteract what the WBC believed, including homophobic and trans-phobic views.

One student group was organized entirely on Facebook, another was a communist group and the center for Identity and Inclusion also hosted a safe-space where students could go to avoid the protest.

The student group of protesters consisted of around 30 to 40 students, many holding beautifully decorated signs.

According to the organizer of the Facebook-organized counter-protest, JT Johnson, “the purpose was to show support for people in the trans community by denouncing what WBC was doing and showing that those who support outnumber those who hate.”

JT thought that this was a success as the number of students dwarfed the less than 10 members of the WBC that came out to protest.

Another group protesting the church was the Get into the Revolution National Organizing tour which is a subset of the Central Committee of the Revolutionary Communist Party, USA. Also known on campus as “those guys who hand you fliers near the Reg.”

When asked why they were protesting this specifically, the leader of the operation, Sunsarah, said the protesters from the Westboro baptist church “are coming from a deep vein of thousands of years of patriarchal traditionalist chains.”

After that poetic statement, she went on to talk about how these people were misguided and that their message of hate was “rooted in the Bible” the United States culture, and other traditions that are deeply harmful to society.

She cited misogyny, homophobia, violence against trans-persons, and institutional racism that were supported by these systems.

She noted that this protesting group was merely an “escalation” and amplification of what was wrong with American society, and therefore protesting it would help convince more mainstream problematic viewpoints to look at their own decisions.

When asked how she thought interactions went with the students who were protesting the WBC she said “quite well.” She went on to explain that there were “many disagreements” that the two groups had, but that they had unified against a cause and more importantly had “many important debates” about how they would shape the future of the world. 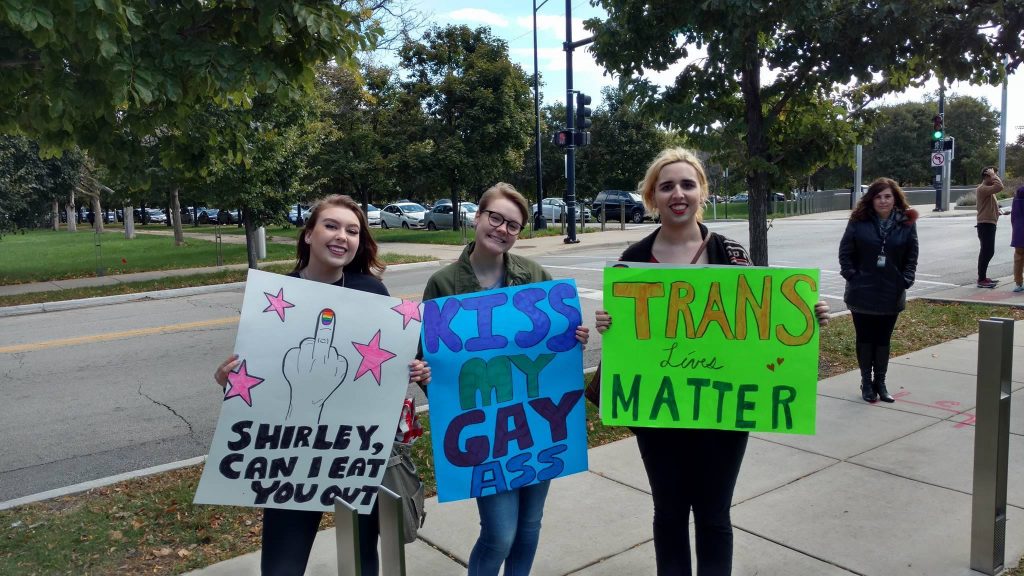 Another student activist couldn’t understand the WBC’s logic, they said: “I was raised Catholic and I was taught that God loves everyone and as Christians we should love everyone but I don’t understand if they’re Christians, why are they so hateful of people that are different than them?

“I just don’t get that. Why are you so hateful if you’re Christians?” The secular communist party agreed that this was not how good people of any belief system should behave.

In the end, there appeared to be little compromising between the WBC protesters and counter-protesters, but some interesting discourse between counter-protest groups as the WBC began peeling out as student activists showed up in force.

According to the WBC’s website, today was but another day in the 1,322nd week of protesting on “the mean streets of doomed America.”