Everything that happened when Milo came to UC Davis

On a cold night at UC Davis, a normally quiet campus was shaken by the chants of protesters gathered to stop one man: Milo Yiannopoulos.

Milo Yiannopoulos, the firebrand conservative, Tech Editor of Breitbart, and self-proclaimed “most dangerous man on the internet” is well known for his controversial tour. Invited by the Davis College Republicans to deliver a speech with “Pharma Bro” Martin Shkreli, his event was canceled last night amid chaotic scenes.

A march was quickly rescheduled for the following day, where Milo railed against his critics and UC Davis for pushing the talk’s cancellation.

He told the crowd: “My message was demonstrated perfectly well by what happened outside, it almost made my speech redundant.” 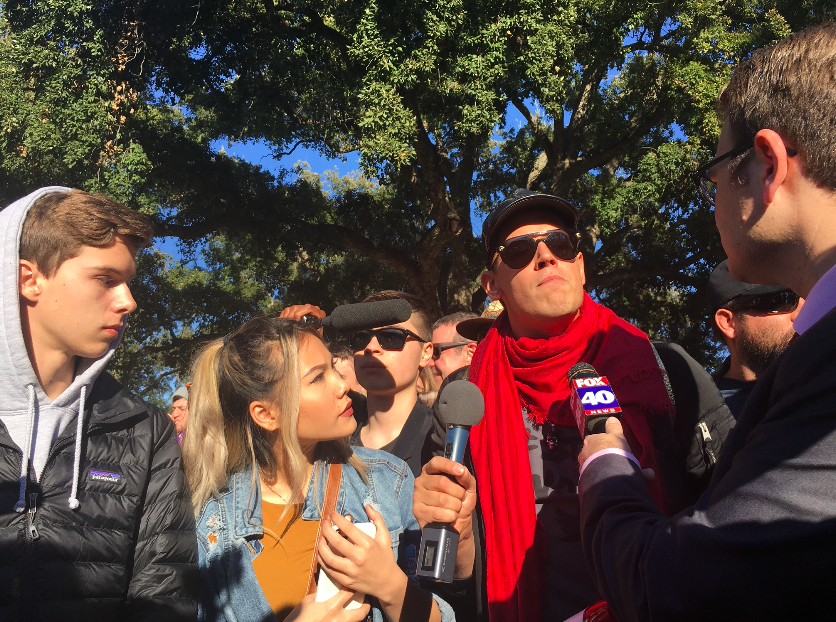 Milo at the next day’s march

It began last night, when hundreds of people gathered to hear Milo and Shkreli speak, and many came to demonstrate against them.

Three groups of protesters gathered. There were the peaceful demonstrators, who chose to remain silent at the back. They handed out chalk for writing sidewalk messages, expressing their opposition.

“We’re here to oppose the hate, that’s all,” one protester told me, who asked to remain anonymous. 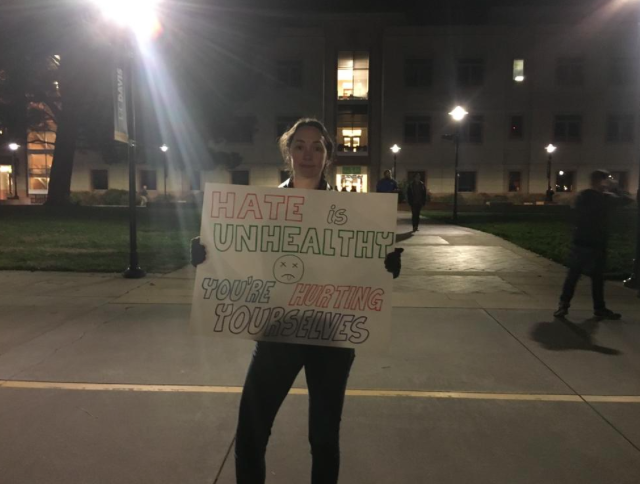 Then there were the professors and the library faculty, who were against Milo’s message, but supported his right to be here.

And then the vocal activist and anti-fascist coalition, a large number of them dressed in black. They had their faces covered and were vocal throughout, chanting “shut Milo down.” It’s worth adding a number of these activists were not UC Davis students.

Tensions were high between protesters and those who came to see Milo’s speech when the latter group sang the national anthem and chanted “USA.” They were met with air horns and “Fuck USA!” chants from the activist group.

“Go home you white trash fascist!” a protester yelled at the group, who I also presumed to be white.

Violence broke out, the masked protesters began to throw stink bombs, feces and balloons filled with urine at the pro-Milo groups. There were some pushing matches, but they didn’t escalate to full blown fights. I saw a protester led away by police after attempting to sneak into the auditorium.

Some of the evening’s tension is captured by this footage from Milo Yiannopoulos’ YouTube channel:

But half an hour before the event, Davis College Republicans decided to cancel after the police declared they could not ensure the safety of students or the speakers.

“We were told by the Chief of Davis Police that they could not guarantee the safety of the students, the speaker, or the police officers if the event should go ahead,” said Gabrielle McDowell, vice chair of the UC Davis College Republicans. “As the organisation hosting the event, we would have been held personally responsible for any harm caused as a result of its taking place. We were therefore forced to cancel the event.”

“It’s a shame that the event was canceled. I waited here for hours,” said Sean Colsey, a third year student at UC Davis. “I wanted to see Milo and hear what he has to say. This is a big turning point for democracy.”

After the announcement came through that the event was canceled – along with the assurance of another event today – most of the students who came to see Milo left. The group of vocal protesters declared victory. The drama of the whole event however, all served to fuel attention towards Milo.

Clayton Germolus, another UC Davis student, said: “The best way to combat him is to ignore him or to ask him questions that reveal his ideology. Protests like this only gave him the attention he wanted.”

He added: “There are clearly a lot of angry people at this school. Angry people who don’t fit in, who are rejected by society and who take their anger out on anything they claim to be (you know, the classic words) misogynistic, homophobic, fascist, racist, etc etc.” 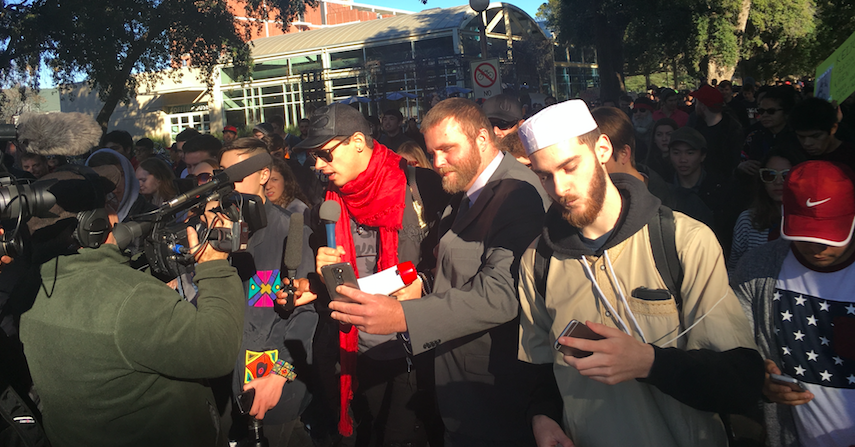 Rennett Beeber said: “I hate Trump just as much as the next person. I can’t stand him. I also understand I have the privilege to basically be unaffected if not positively affected by his views and policies.

“However, I have done my research on Milo and I’ve known about Shkreli for a long time. These people have the same rights as you, to freedom of speech and expression.”

And attention is indeed what Milo got. Shortly after news spread of the event being cancelled, Milo posted a video on his YouTube page of violence happening at the protest, as well as a video of Breitbart’s cameramen being spat on. The protesters are now receiving backlash online from students who didn’t agree with Milo but supported his First Amendment rights.