There were 16,000 people at the Bernie rally in Sacramento

There was vaping, weed and politics

The traffic had just begun to pile up as I descended into the urban jungle that is Sacramento. Bonney Field, located at the Cal Exposition and State Fair is an Oasis of green in an otherwise concrete desert, which is fitting considering that the silver haired phenomenon that is Bernie Sanders is proclaimed to be a political oasis of sorts.

It is telling that despite Sanders’s advanced years, his appeal to people of all ages was ubiquitous – an embodiment of the fact that his platforms are unifying and not divisive, and thus appeal to people from every age group and strata of society.

The day was wonderfully sunny as I picked out my first ‘victims’ to badger-which is when I stumbled upon Catalina, Johanna, Lily and Olivas. 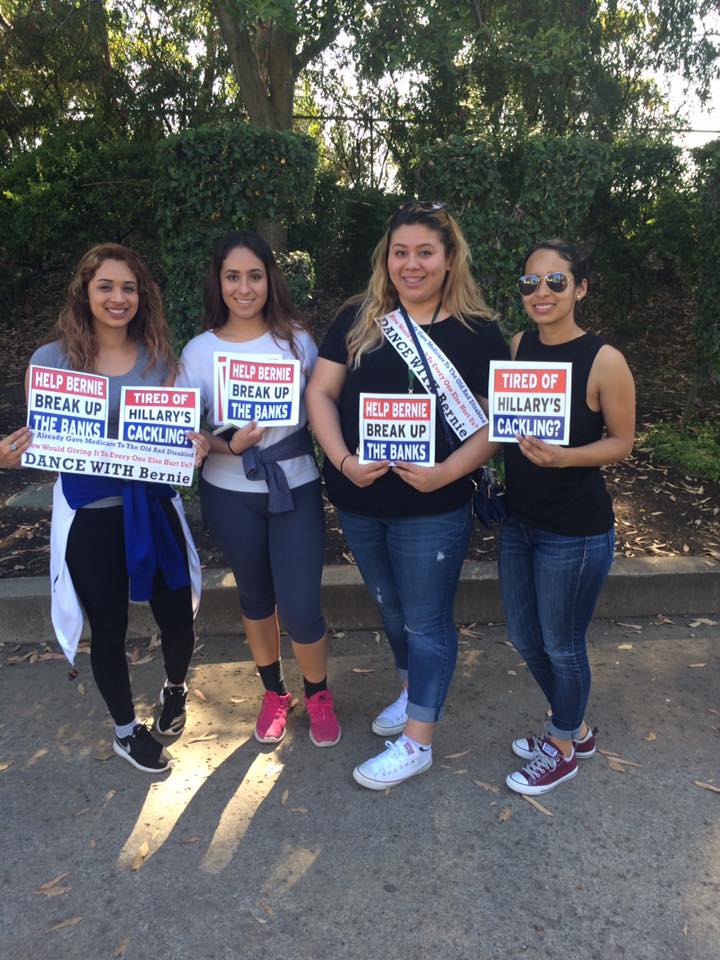 “I love Bernie Sanders because unlike Trump, he doesn’t think that all Hispanics are rapists”, said Johanna sarcastically. She informed me that she had the distinct displeasure of going to a Donald Trump rally (kudos to her for being open-minded and frankly, brave enough to do it).

After a good laugh,Catalina elaborated that her biggest draw to Sanders was the fact that he wanted to subsidize education -“Bernie makes kids want to go to college, because his plan will make it financially possible for them to do so”, she said emphatically.

Next, I spotted Lexi, Natt and Jess. 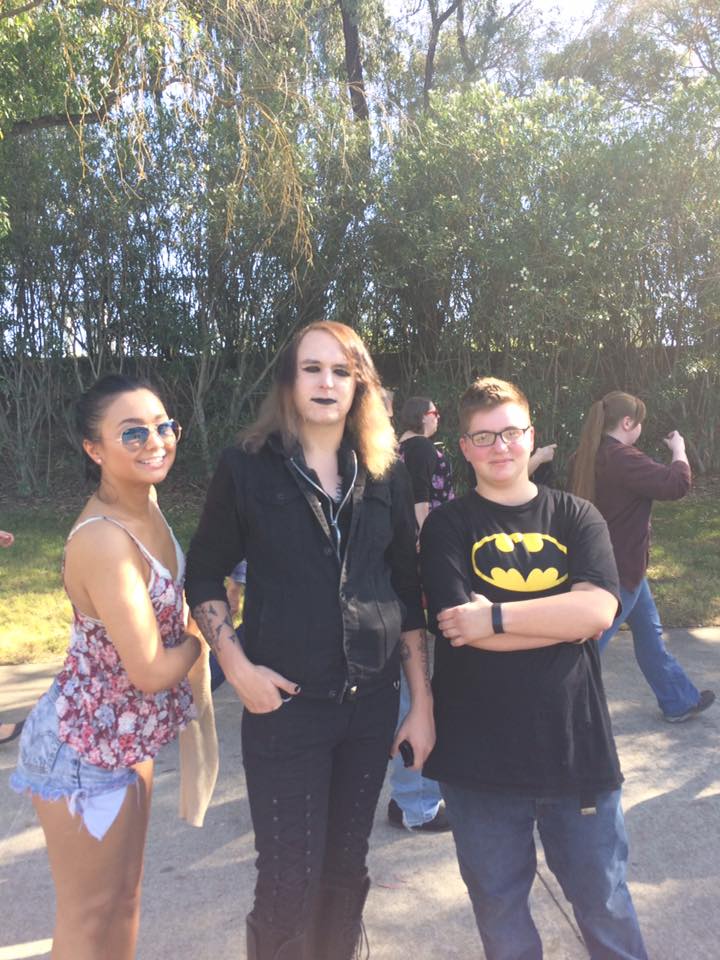 Natt argued Sanders’s rhetoric was consistent both before and after his decision to run for President.  He said: “Bernie doesn’t beat around the bush, he tells it how it is”, was his consensus.

Lexi, a student from Oregon State University said that in her opinion Bernie embodied what freedom truly meant.

“Bernie lets you be who you are, that is what freedom actually is”.

I sensed a developing theme emerging based on my interview with the two groups. More than being looked after by the state, people (at least in Sacramento and the surrounding area) simply want to be provided an opportunity to better their lives, whilst retaining who they want to be.

Buddy was an embodiment of the latter philosophy, to say the least. 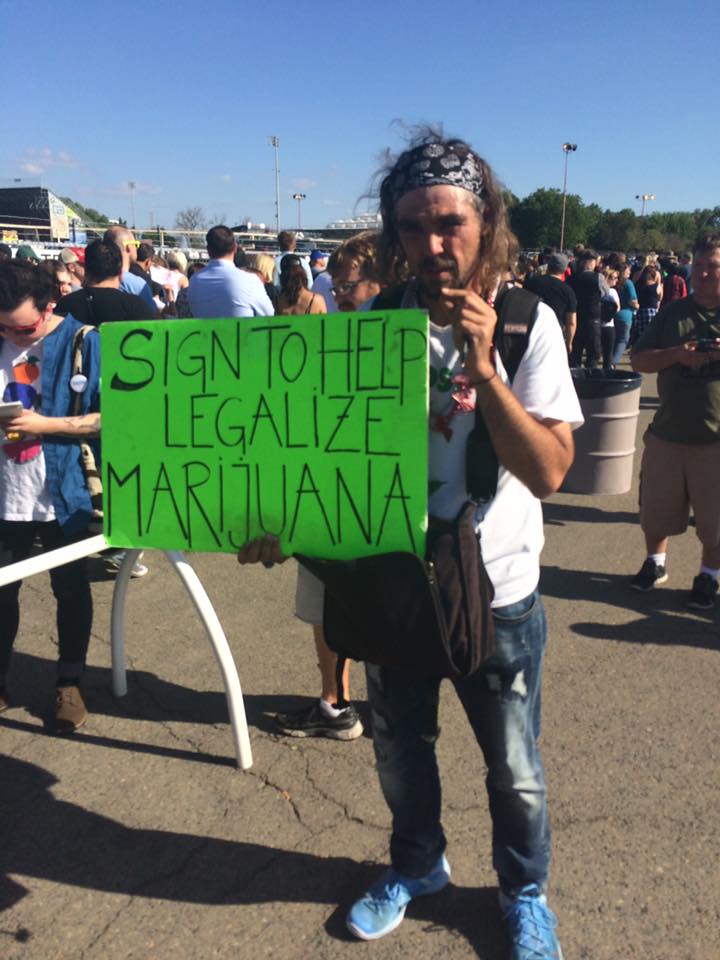 “Fuck yeah man, you can definitely take a picture”, he said (before asking if I would sign a petition).

As I made my way to the checkpoint where I had to pick up my media accreditation, my nostrils were greeted by the wafting aroma of marijuana. Clearly, Buddy has more of a chance in his mission than first seems apparent. After being patted down by the secret service, a volunteer directed me to the media box with the explicit warning not to walk across the field -“The Secret Service have threatened to snipe anyone who walks across the field before the event starts”.

I laughed nervously and carefully chose to walk on the path.

After making awkward small-talk with a cameraman, I soldiered on only to find Dominick and Chelsea occupying a perfectly comfortable spot in the shade. 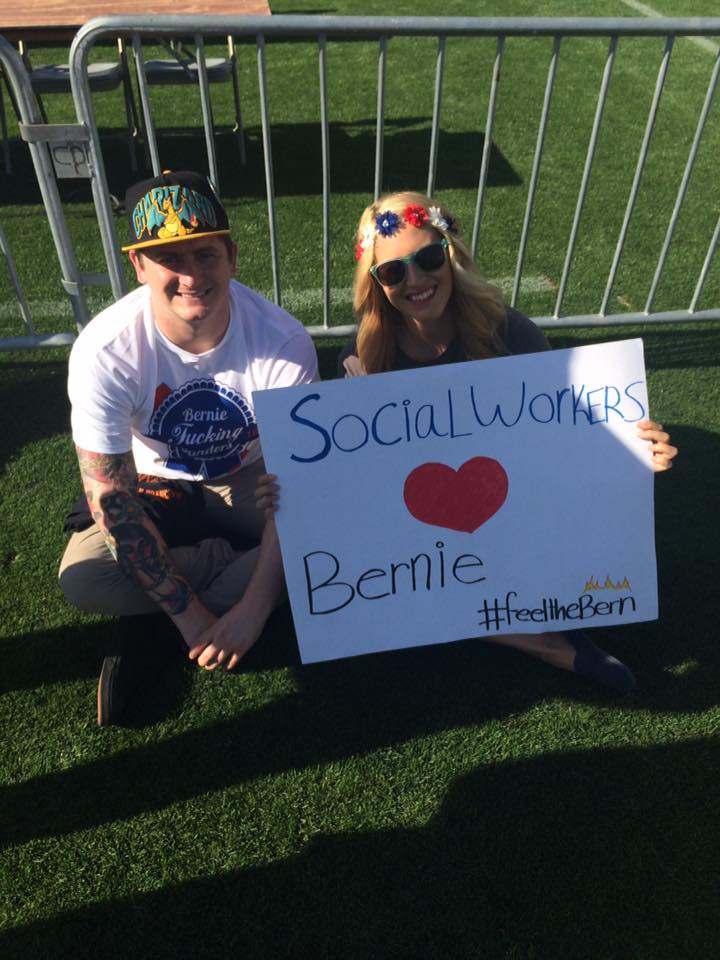 “Bernie is one of us!”, declared Dominick.

“Bernie is incorruptible and doesn’t bullshit. He wants to take down the big corporations”. He also added that he had lived in England for three years previously and in his opinion, a free healthcare service like the NHS was overdue in America.

Chelsea added,  Bernie was “By the people, for the people and off the people!”.

My penultimate and perhaps favorite interviewees were Erick and Shaun. 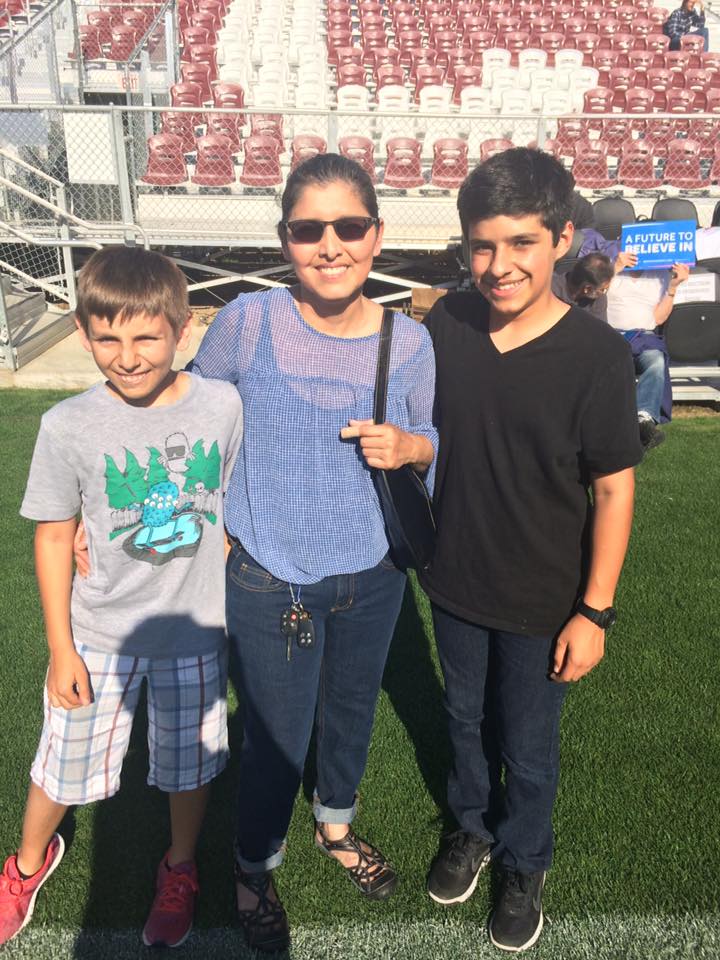 “I like Bernie’s idea of healthcare” said Shaun before adding, “do you need more?”

After I insisted that I did, he said that he liked how determined Bernie was and was appreciative of his propagation of LGBT rights.

“Am I going to be famous?”, asked Erick rather hesitantly before adding that he felt the same way as his brother.

Finally, I decided to conclude my badgering by not-so-innocently hijacking another reporter’s interview with high school students from Sacramento. 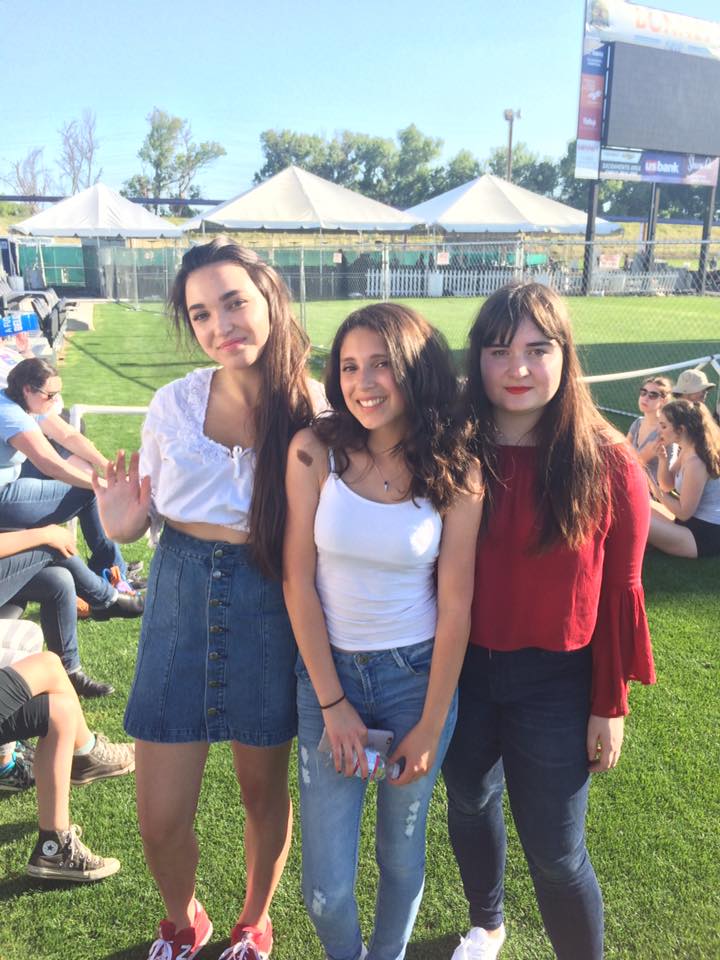 Again, I was met with the response that Bernie was the champion of the people and how they supported his purported persecution of big corporations and big banks. Josephine also highlighted how Bernie played an active role in the Civil Rights Movement in the 1960s’ – “Bernie’s actions are synonymous with his words”.

I found an overwhelming sense that whilst Bernie Sander’s platforms are not all necessarily unique, people seem to have an unwavering faith in his ability to deliver on them. Now, the mismatch between a politician’s words and their actions is as standard as humans requiring oxygen to respire. However, Bernie has an almost genial sincerity that seems to endear him to the voting public.

Time ticked on as the crowds continued to mull in, I sat patiently gathering my notes whilst listening to Joe Kye’s impressive performance of ‘Riders on the Storm’. He ended by mentioning that he was a first generation immigrant, which drew cheers from the crowd. 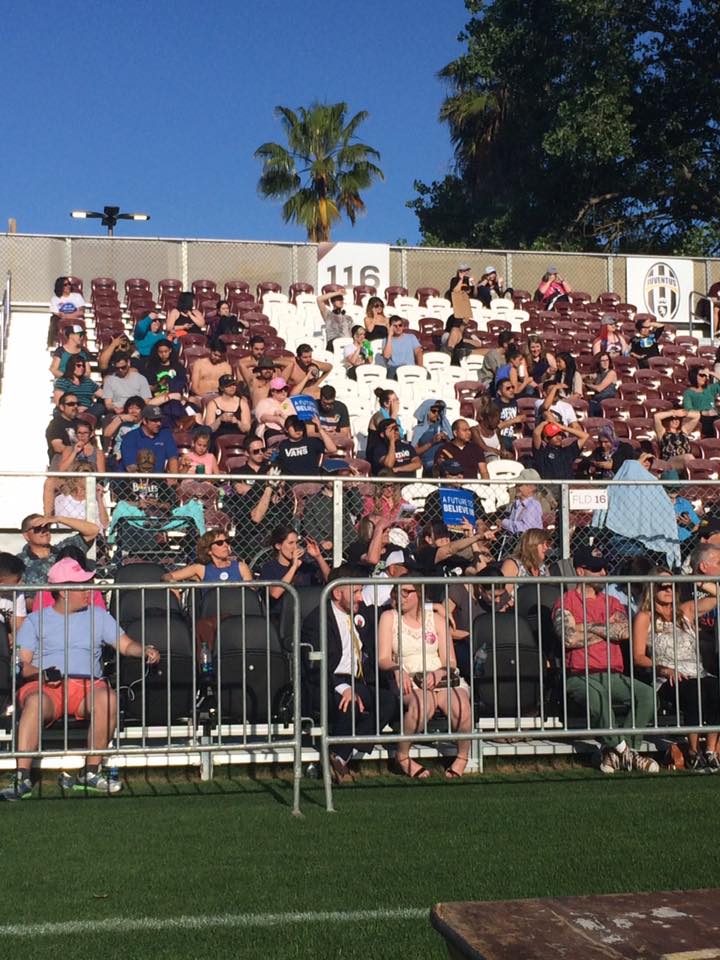 I managed to get into the TV box for Bernie’s arrival. By now the house was full, with only part of the field left unoccupied (probably because being sniped ruins anyone’s day). The legend that is Danny Glover pumped the crowd up in eager anticipation of the man of the hour.

And there he was. Greeted by thunderous applause and chanting – Bernie Sanders. 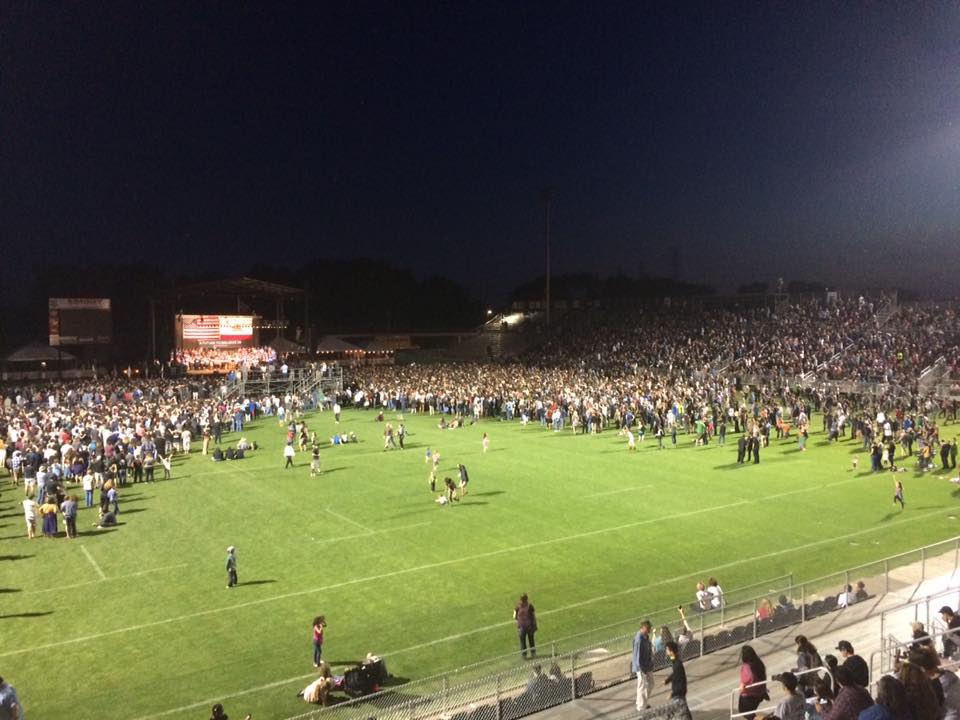 Bernie was his usual eloquent self, painting a picture with words about how he was going to build a better future for America. 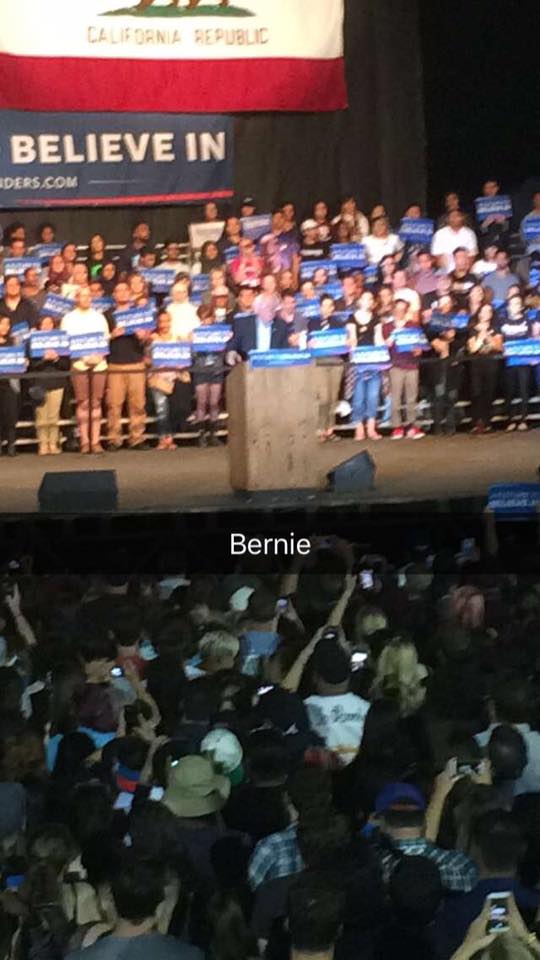 A future to believe in

As I left the venue, I could not help thinking that Bernie Sanders definitely has heart. But as he said himself, he needs about 1,000,000 votes within the next month. A bridge too far? Perhaps.

What is indisputable however, is that Bernie has shown Americans that a politician can be successful, yet honest at the same time and that in itself is worthwhile.