A sports bra is not an invitation to sexualize my body

Some opinions on Campus Rec policies, body-shaming, and clipboards.

Let’s talk about skin and why people are so fucking afraid of it. Since 7th grade, I have gotten comments from teachers and older relatives that I “show too much skin.” Hmm, that’s weird because the only skin I’m showing is shoulder skin. Teachers were scared of my shoulders. Apparently shoulders are a suggestive body part.

But it wasn’t just that. If I was wearing a shirt that revealed a strip of my stomach when I raised my arm, it was “a very Nora shirt,” and I “needed to go put on something more appropriate.” For who though? Who did I have to look “appropriate” for and why was my stomach something to cover up? For anyone who has ever been a pre-teen girl, you know that self-confidence is constantly at an all-time low, maybe raising ever so slightly when Alex asks you to slow-dance to Beyonce’s Halo at the Fall mixer.

Every dig, especially at your appearance, chips away at this faltering confidence. When teachers, adults who I genuinely respected, hopped up on their pedestals and told me I couldn’t wear the outfits I had carefully crafted the night before, the outfits that I felt good in, they put a lock on my body that I thought for a long time had no key.

Be conservative. You’re only wearing that to get attention. Leave something to the imagination. SHUT THE FUCK UP. Am I the only one who is tired of being ashamed of her body?

According to DoSomething.org, approximately 91% of women are unhappy with their bodies and resort to dieting to achieve their ideal body shape. Unfortunately, only 5% of women naturally possess the body type often portrayed by Americans in the media. 58% of college-aged girls feel pressured to be a certain weight to further my point.

The teachers, the parents, the “boys will be boys” are all lying to you. Truth is, they don’t want to see your skin because they’re uncomfortable in their own bodies and the mere thought of you actually loving and embracing yours makes them shit their pants with insecurity. Skin is….guess what…FUCKING SKIN. And to make it out to be anything other than that, to sexualize it, to privatize it, to put a barcode on it, is bonkers to me.

My skin is mine.

This is all what I wanted to tell the girl with the clipboard who approached me at the gym at Temple. I had barely stepped foot on the treadmill when I sensed someone trying to get my attention. I pulled out my earbud only to hear, “Do you have a shirt?”.

I had been motivated, caffeinated, ready to kill this workout, but my face dropped and my heart started racing at hearing this. It was that combination of disbelief, anger, and discomfort that dries up your tongue so that all you can say is, “What?”.

It’s not like I didn’t know what she was referring to, more the fact that she was confronting the way I looked as if it were an insult to her. I was wearing a sports bra and high-waisted leggings. 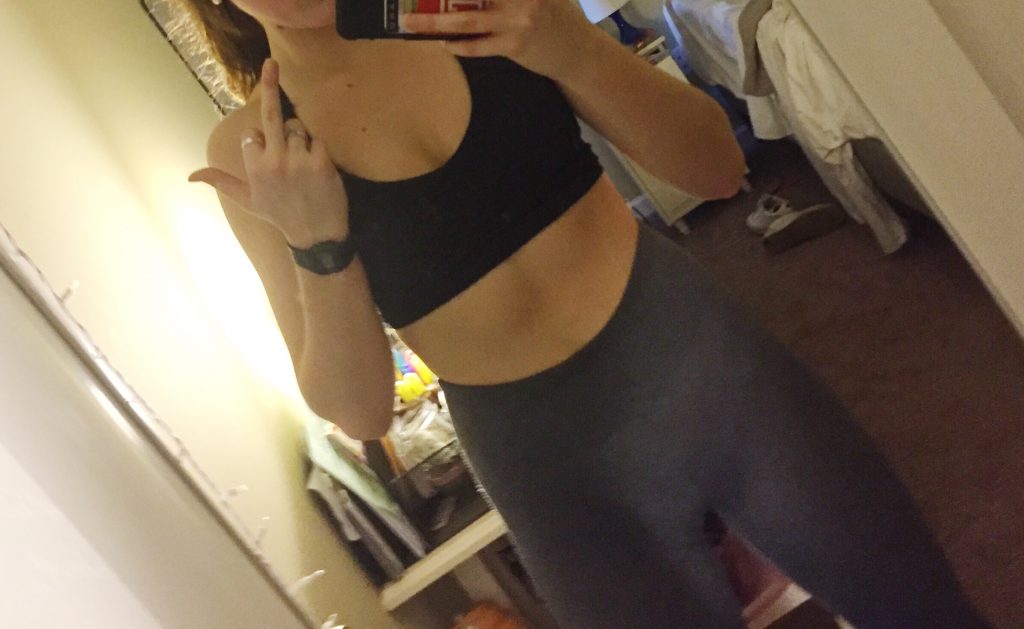 My shoulders, three inches of my stomach and my non-existent boobs were, for the most part, bare. I know. Scary, right? When I told the clipboard girl, “No, I don’t,” and she gave me the “ahhh that’s too bad, but you still have to leave” face.

I knew this policy wasn’t hers, but I still pictured her sitting at a long table with a gavel, ruling “No Sluts Allowed,” *gavel sound*. Why was I was I subjected to this rule? Was I not covering my *EXPLICIT* nipples? Was I not ashamed enough of my stomach?

I reached out to the Director of Campus Recreation for some clarification. Maybe I was overthinking this.

The director explained that a committee of full-time Campus Recreation employees had met to evaluate the efficiency and appropriateness of standing policies. When met with the “Must wear a shirt at all times” policy, the director informed me that it was the result of preventative health measures. The committee “tried to determine what [they] felt comfortable as the minimum requirement for a patron to limit the risk of transmitting these communicable diseases.” To me, that still didn’t explain why I couldn’t wear a sports bra, nearly the same coverage as a tank top, to the gym. That was until the director of Campus Recreation explained that he and his committee “did not feel comfortable defining what that shirt should look like, or how much of the body the shirt should cover.” Discomfort is a funny thing. As many conversations as it can close, it also has the opportunity to open a few. So why not open the conversation to our student body? Why not tell the administration that the world is changing and are policies must change with it. I understand the discomfort of trying to tell a patron how much she should cover, but if this is the case, involve your patrons in the conversation.

The reason I share this story is not to slight Campus Recreation or deny that this policy does not have value. But, when I was at the gym today, I felt like I was back in 7th grade. I felt humiliated for the way that I was dressed and even more humiliated that I had felt confident in my outfit before I left. NO ONE SHOULD FEEL LIKE THAT. The gym itself is often a male-dominated space that intimidates women and has made me feel for years like I had to wear baggy clothes so I wouldn’t get harassed or believed that I should stay away from the weights so I wouldn’t make myself look foolish.

The shaming of sports bras in a gym (note my annoyance) reinforces the mentality that the number one thing a woman should be focused on when she works out is her appearance. And to all the assholes saying, “But, isn’t that why you wore a bra to the gym? To get attention?” What I wear to the gym and my reasons for wearing it concern me and only me and when I do go to the gym, it’s because I want to work out, as shocking as that sounds.

The real problem is not the policy itself, but the subtext of this policy. The problem is the principle that commands women to cover up their skin at the risk of offending someone or provoking some dude’s boner. To deny that this subtext exists is to deny my experience as well as the experience of other females or female-identifying individuals. In the current social climate of female solidarity, it’s time we stop putting up with this shit. It is time that we desexualize skin and, more importantly, the female body. Don’t tell me that it’s on us as women to prevent harassment, body-shaming, and slut-shaming. Tell me that you’ll treat me like a human being. Tell me that, and maybe I’ll put a shirt on.