REFORM Philly: A night to confront the uncomfortable truth of mass incarceration

At the University of Pennsylvania’s Irvine Stadium, Jay-Z’s company Roc Nation held a forum with a myriad of advocates for criminal justice reform gathered to tell their unique stories, bound by the unfortunate reality of the discrimination of black and brown people in the United States. 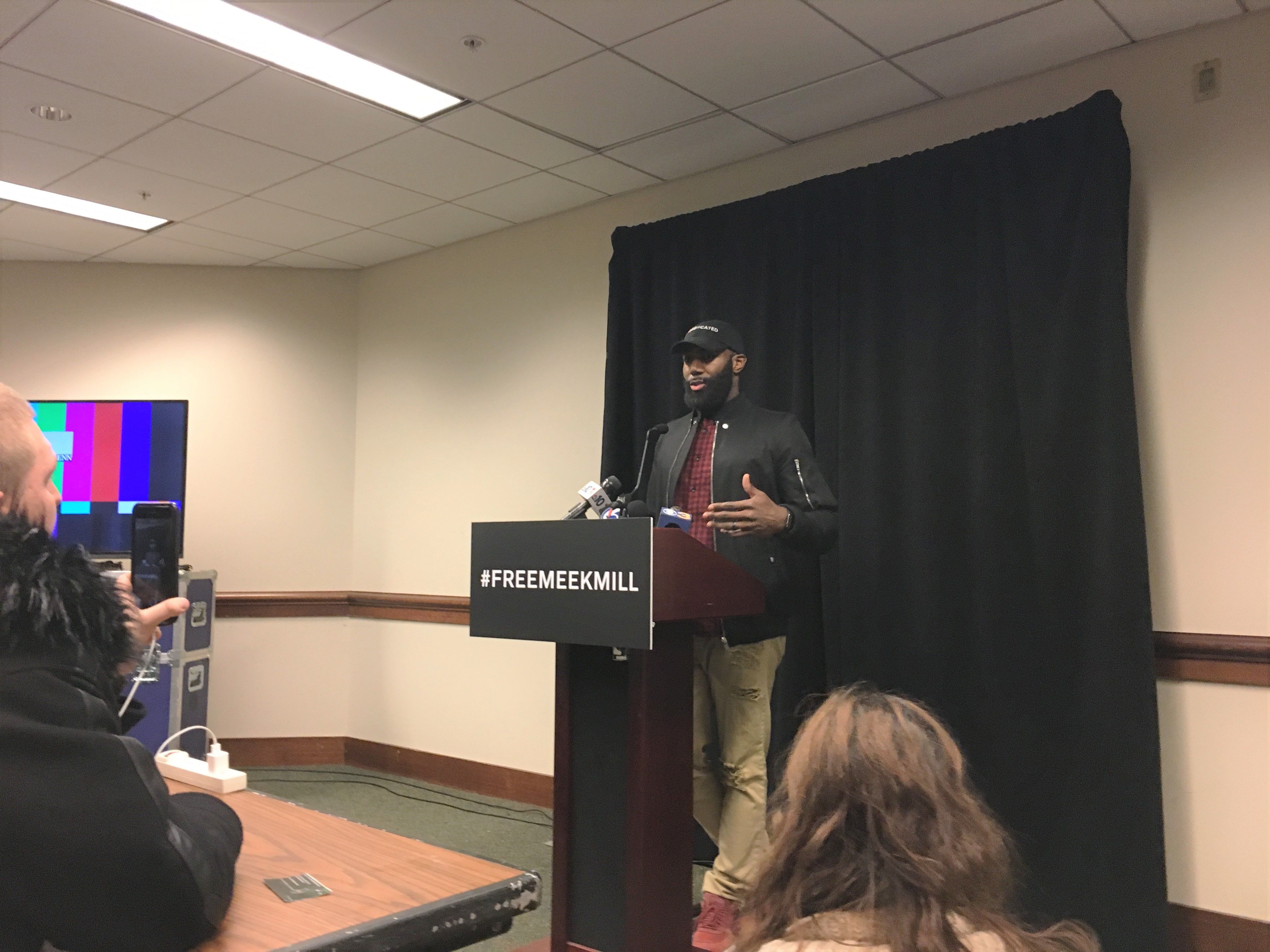 Each of these advocates came to the podium with one goal in mind, fight or be forgotten. They've chosen to fight.

The event began with a rousing speech by Bryan Stevenson, founder of the Equal Justice Initiative, where he recalled young black men and women fighting to register voters at the dawn of the Civil Rights Act of 1964. Stevenson also noted this would be the same effort required to create meaningful change in criminal justice reform.

Visibly frustrated, Tacopina began listing alleged injustices committed by not only the Judge in Meek's case, Judge Genece Brinkley, but committed by the American judicial system as an entirety against black and brown people.

Bryan Stevenson, founder of the Equal Justice institute, addresses the crowd in the Irvine Auditorium.

Joe Tacopina, Kathy Williams, and civil rights advocate Reverend Al Sharpton discussed the future of the movement to not only free Meek Mill, but also ending mass incarceration as a whole. Reverend Sharpton noted that "if you're a mobster in Philly, you get a good enough lawyer, you can get out and go home.

Ms. Williams, Meek Mill’s mother, was driven to tears by the ordeal, as she detailed the toll that her son’s incarceration had taken on the family.

Meek Mill’s attorney, Joe Tacopina, stated that this case is “…is unique in the most perverse ways. It's unique in the way that I've never encountered facts like this… in [his] 25 years in law, [he's] never seen a case so overly punitive." 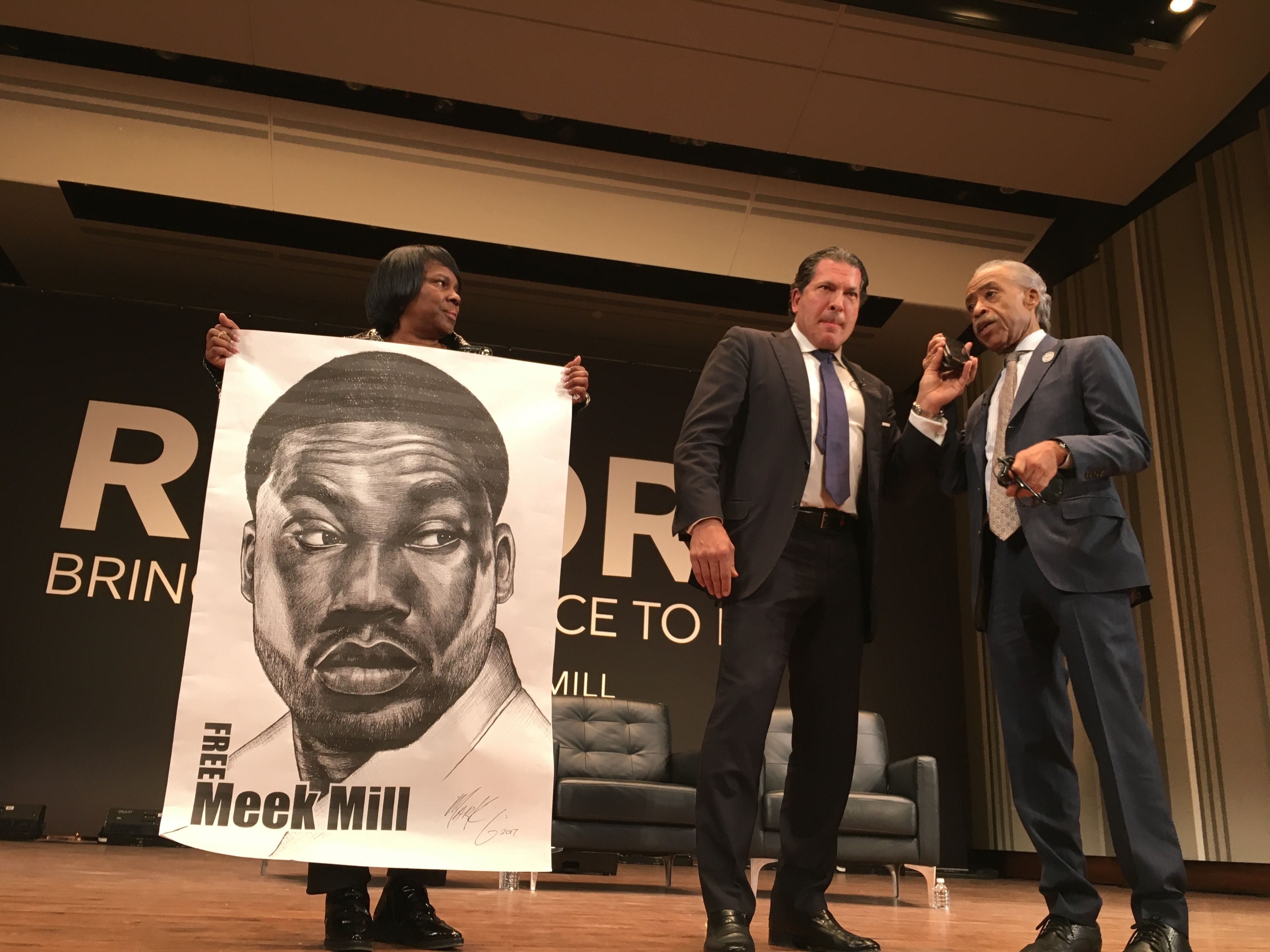 (L-R) Kathy Williams, Joe Tacopina, and Reverend Al Sharpton, all listen as Meek Mill calls from SCI-Chester, the prison he is currently being held at. (George Basile)

After some remarks from long-time civil rights advocate Al Sharpton regarding his involvement with freeing Meek Mill, Joe Tacopina received a call, which he put on speaker as he had rapper Meek Mill on the phone from State Correctional Institute (SCI) Chester. The rapper was enthusiastic and delivered words of inspiration and wisdom as he called for reforms to the system that entangled him and so many other black men and women like him.

During the call, Meek said he "appreciates all the love and support everyone's brought to the table." Meek later recounted the struggle it's been for him since he had turned 18. "Even when I signed a record deal, I started feeling good about myself, but I still had this mistake haunting me from so many years ago," Meek said. 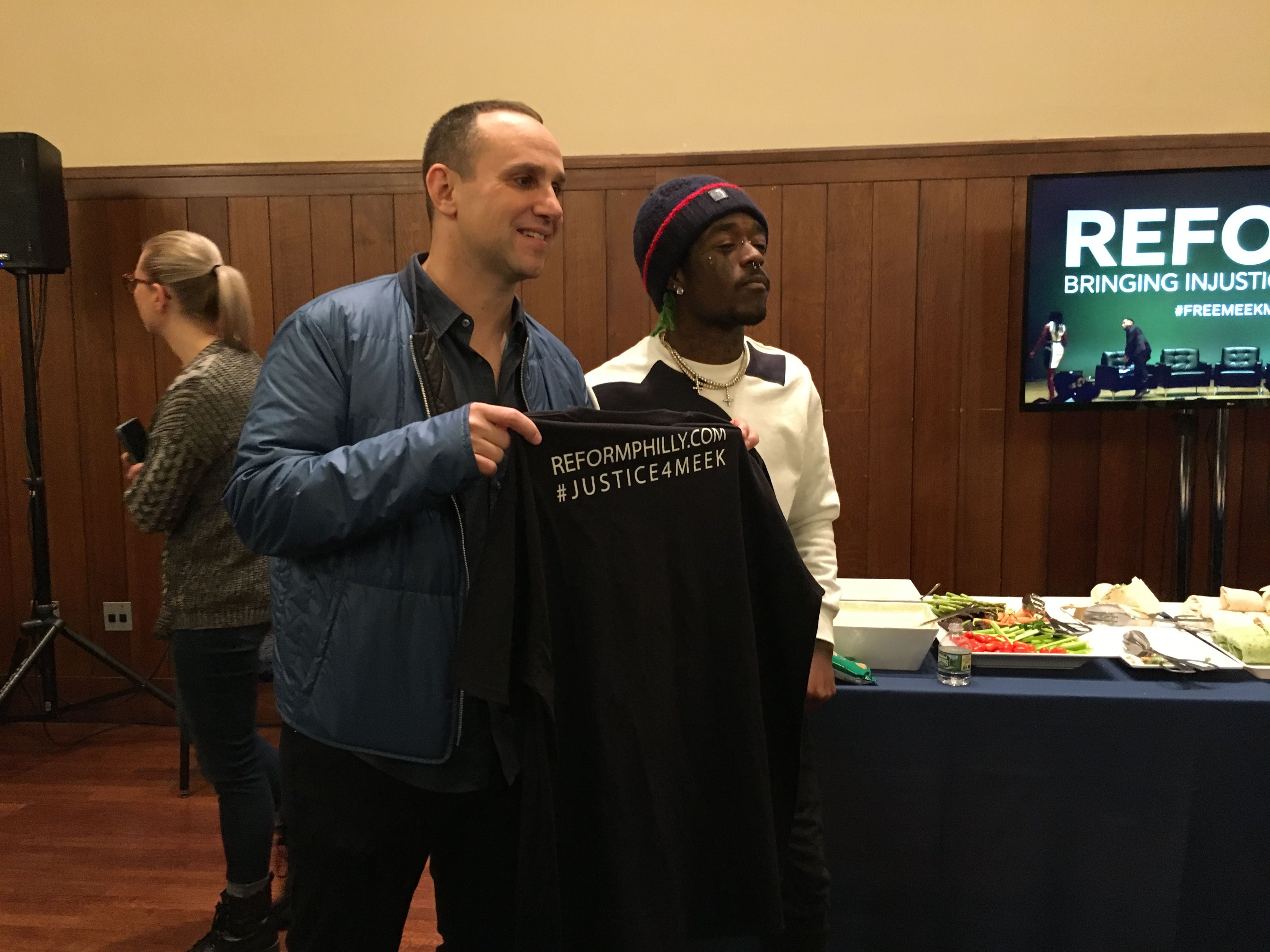 Rapper Lil Uzi Vert poses with the event's t-shirt before answering questions from The Tab Temple.

After the panel ended, Lil Uzi Vert, another native-Philadelphian rapper told The Tab Temple regarding his role in the movement to free Meek, that "Everyday is just somethin' new, it's part of history. I wake up, everyday Meek wakes up, or anybody wake up, it's always somethin' new that you've never seen before. We all play a part in this. If we're missing him, a part of our culture is missing."

Malcolm Jenkins, Eagles safety and vocal criminal justice reform advocate, attended REFORM as well. During a press conference, when asked about what inspired him to lend his voice to the movement of freeing the rapper, Jenkins noted that "He was sentenced two years for popping a wheelie, I think that's an example of how ridiculous this system can be where we waste resources on locking up people and not making our communities safer."

The event brought together all walks of life, bound by a single goal: finding a solution to the problem of mass incarceration. Meek Mill's incarceration is a prime indicator of a prevailing problem which reflects America's worst characteristics. It's a failure on so many levels to maintain equality in the justice system, and a continuation of systemic indignation of black people in America.

Meek Mill is just one of hundreds of thousands of cases where the system has failed a young black man or woman. Hopefully though, it seems as if Meek Mill’s incarceration may just be the key factor in bringing about change to this epidemic.