It was the first public discussion the University has held on the issue in the three years since they proposed the stadium.

On Wednesday, March 6, President Englert held an informational town hall about the proposed multipurpose facility and stadium. The town hall has taken place during a week that Temple University has spring break, much to the chagrin of the student body.

President Englert opened his remarks by asking the crowd three rhetorical questions. Each of the questions would be met with angry mumbles from the fervent crowd.

President Englert would address the issue of financial viability in regards to “leasing the Linc” in the future. Englert made the assertion that the lease would cost the University more money than what they view as feasible. Englert also proposed that the fixed costs of owning a “multipurpose facility” would ease the budgeting processes for the University.

The crowd became increasingly angry as President Englert detailed the crass divulging of financial benefits for the University. Englert spent the next 5-7 minutes discussing the possibilities of academic achievement this would mean for the University as well as the recruiting ability they would gain for both students and faculty.

By the time President Englert began to discuss “special services district,” a system which would mean the City of Philadelphia would pick trash up twice a week as opposed to regular once a week collection, the crowd had had enough. Loud chants of the “Stadium Stompers’,” the community action group that opposes a stadium being built in North Philadelphia began to shout their signature chant “Down with the Stadium, up with the community.” This chant, among others, rang throughout the rafters of Mitten Hall. One protester proceeded to call President Englert a “Disgrace to Russell Conwell’s name.”

The energy in the room was tense, to say the least, as the University repeatedly halted and continued the meeting every few minutes.

Donors and other supporters of the stadium stood by and watched quietly as community members rallied for the preservation of the place they call home.

When asked his thoughts on how he felt about the dynamic of the town hall, Temple Student Government President Tyrell Mann Barnes said, “It was disappointing. I think it was… because there was a lot still to be said on both sides of the fence, but I think there should have been more opportunities for people to express how they felt.”

Malcolm Kenyatta, Democratic candidate for the 181st PA assembly district, was angered with how this town hall was the first form of public discourse the University had engaged in since they announced they were exploring the possibility of erecting a stadium. “The continuation of people, not being heard… it leads to a distrust, it leads to a cycle, that can feel like it can’t be broken.”

This is a perspective that was made loud and clear by the crowd in Mitten Hall. 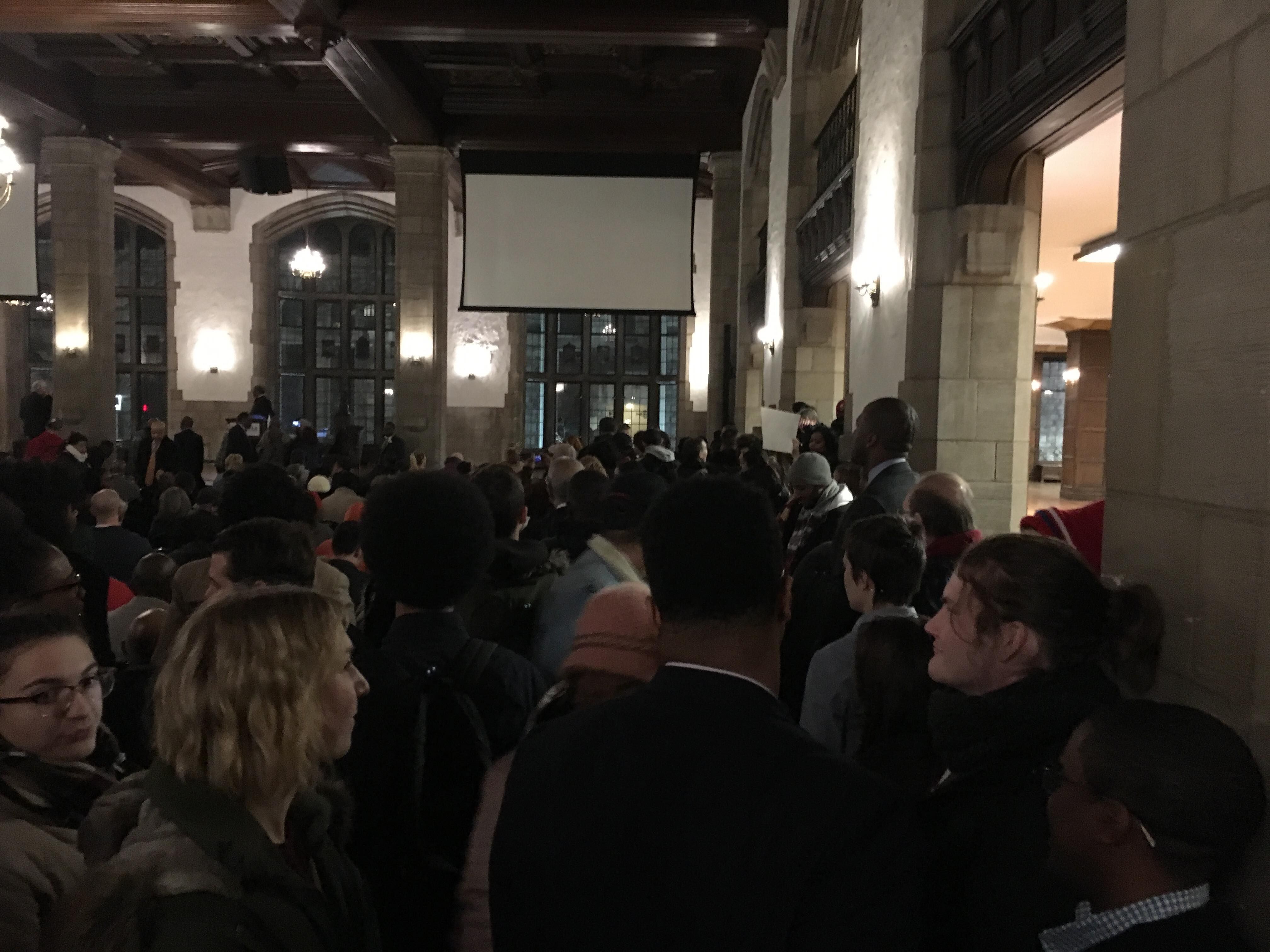 Protesters take over the town hall.

Ray Betzner, Temple’s Chief Spokesperson, said that Temple would continue to hold discussions with the community regarding the stadium, but would not say how those future discussions would take place.

Temple students took to Twitter to express their frustrations about the stadium as well.

Reminder: a week ago the community hosted a forum and invited @TempleUniv admin to visit…nobody showed.

Today, the same admin left their “town hall” while community members began to share their opinion.

I’m disappointed but not surprised. https://t.co/tTsgO9r4cA

Pres Englert said that in order to improve the university / community relationship listening needs to happen. But then when community starts sharing their experience he gets a police escort out of the room. So who needs to do the listening? ??

The booing has grown so loud that University President Englert has stepped away from the microphone (@TheTempleNews). pic.twitter.com/yhdFoxSUgz

In addition to the reactions from Temple students, there is a survey regarding our experiences here at Temple. The responses to this questionnaire will help the university learn about students' perceptions of Temple's academic, social, and administrative programs and gather information about students' participation in various university and non-university activities.

Temple students are encouraged to fill this survey if they wish to express their concerns and it should only take an approximate 10-15 minutes to complete.