On a cold Saturday in November, Lincoln Financial Field, laid host to the second annual PHL Unity Cup, an initiative by Mayor Jim Kenney to unite the City's diverse communities. The championship game, which also featured 27, now US citizens, people receiving their Oath of Allegiance to become citizens.

This World Cup-style tournament distinguishes itself from its international counterpart in more ways than skill level. At roughly 5:30 p.m., when the sun began to set and the bright stadium lights of Lincoln Financial Field flickered on, a parade began preceding the championship final. After the more than 45 countries, including US territory Puerto Rico, completed their march on to the pitch at Lincoln Financial Field, the naturalization ceremony began. 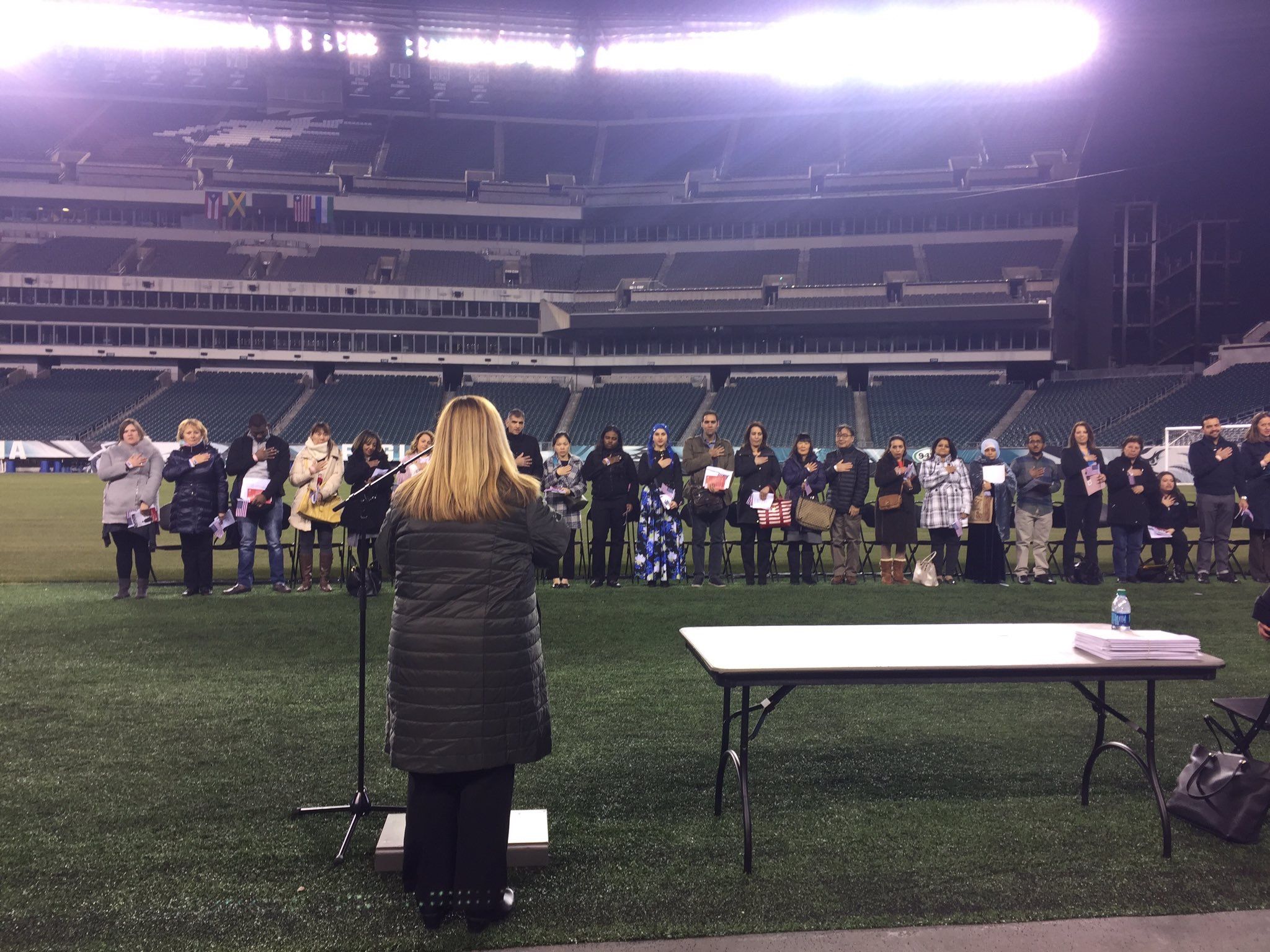 Now US citizens are administered the Oath of Allegiance, the sworn statement making them US citizens (Credit: PHL Unity Cup/City of Philadelphia)

Attendees, many of who were family members of the oath takers, looked on as the United States grew by 27. The new citizens of the United States were then treated to Philadelphia's finest soccer and the opportunity to register to vote, as Philadelphia Commissioner Al Schmidt and his office were on hand to assist the new citizens in taking the correct steps in utilizing their new right to vote. 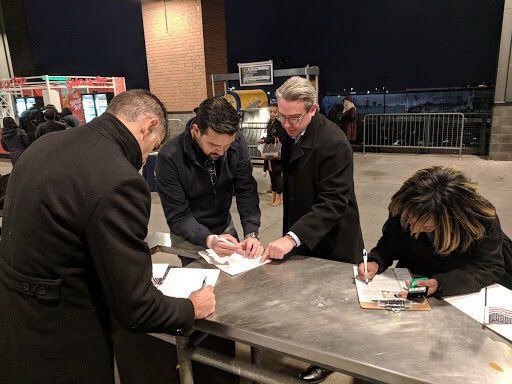 What a great honor it was to, finally, become a citizen!
The voter registration at the end was just as meaningful to me (and incredibly convenient, of course).
Thank you for the photos.
Here’s one from a different angle. pic.twitter.com/3wneC1A8vd

Rafael Curty Freitas, a native of Brazil, was one of the 27 sworn in as a citizen of the United States on Saturday. In his tweet, above, he is seen being congratulated by the City Commissioner on his new right to vote.

Following the swearing-in ceremony, the championship game would feature Team Liberia vs. Team Sierra Leone. Early on, Sierra Leone displayed their grit and determination by striking early to make it a 1-0 match. An equalizer came from the Team Liberia side around the 33rd minute of play. However, Team Liberia would not be settling for a draw in the match to decide neighborhood bragging rights. The next two scores would come from the gents from Team Liberia to ultimately end it at a 3-1 match at full time.

Liberia's fans are celebrating another goal! They're in a 3-1 lead over Sierra Leone. pic.twitter.com/bHZBfG9fWY

Mayor Kenney was on hand to award Team Liberia their championship trophy and congratulate them on a hard fought win. 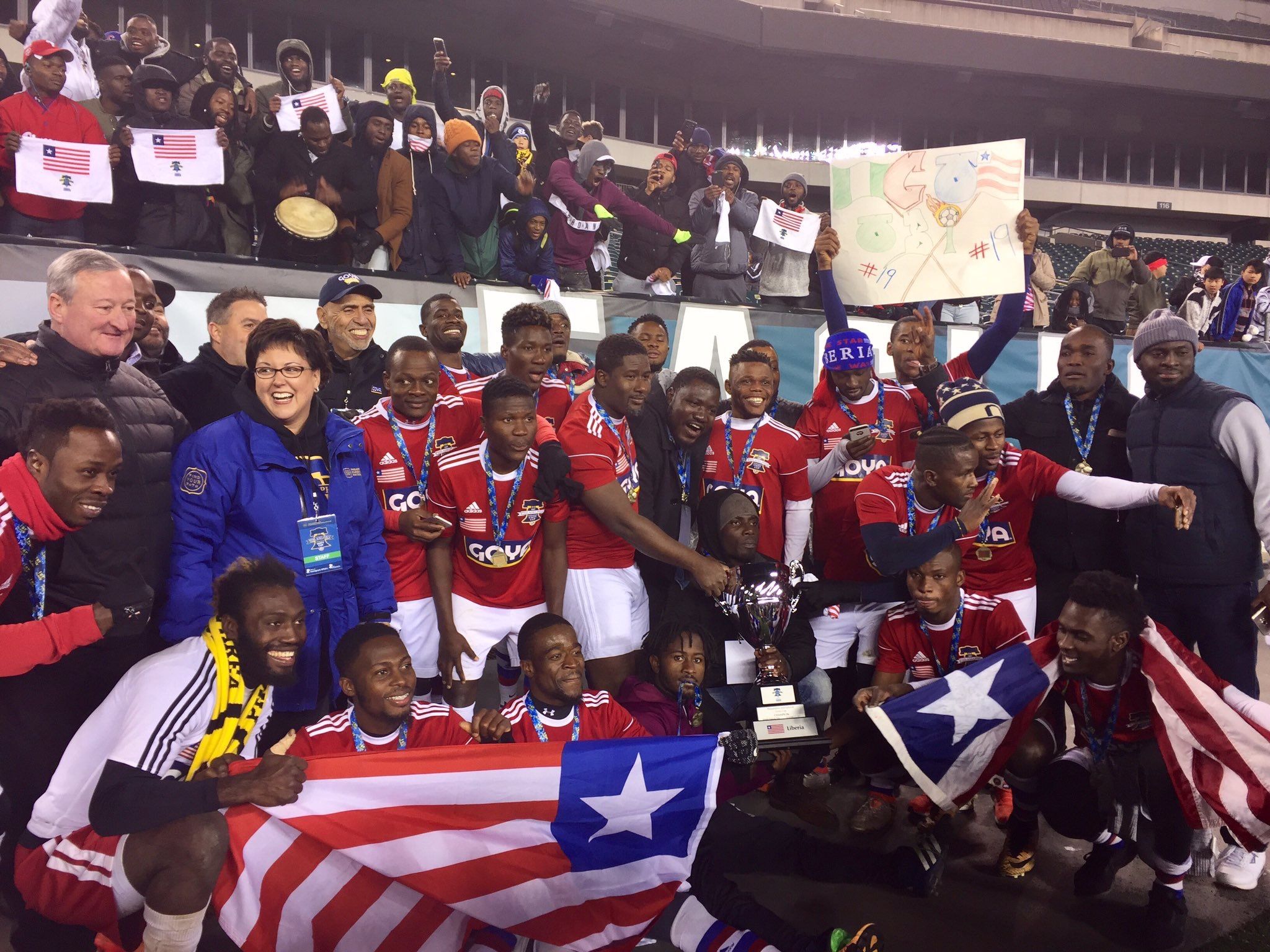 And in the history books goes the playing of the second annual PHL Unity Cup. The Cup has distinguished itself, in its brief history, as a strong unifying force in an America that can't seem to identify a true path forward with regards to diversity relations. The PHL Unity Cup could set the precedent of diverse communities from across a region competing, and most of all, having fun, together.