A rally for Meek Mill took place today in Philadelphia

This comes after the rapper was sentenced unfairly

Earlier tonight, a rally was held outside of the Criminal Justice Center located in Center City, Philadelphia at 5 p.m. in support of native North Philadelphia rapper―Meek Mill. 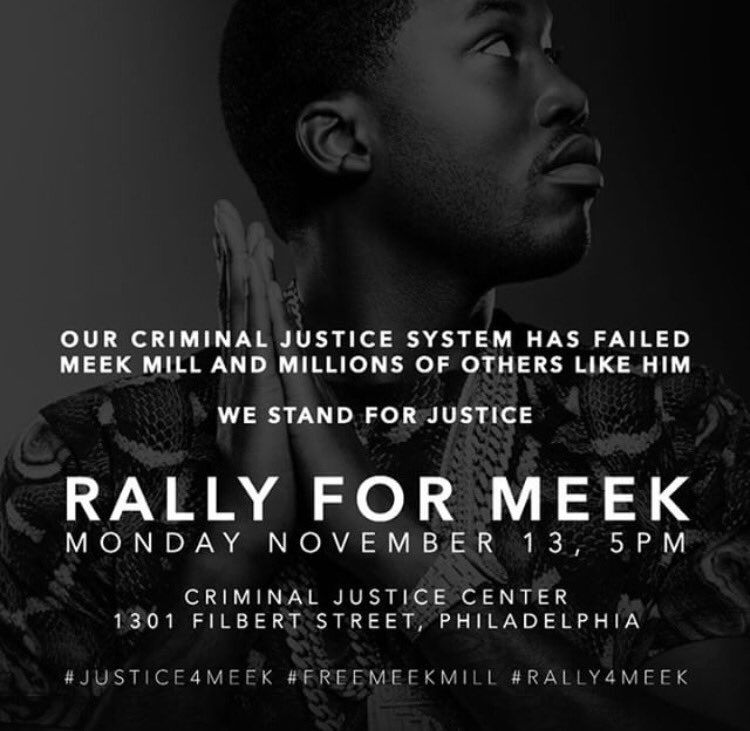 Flyer handed out, and also posted on social media.

Meek Mill was sentenced to 2-4 years in prison for violating his probation due to his past actions earlier in the year, including an unlawful stunt on a bike, and for failing a drug test while in court the week before.

Hundreds of people showed up to show their solidarity for the rapper.

Many celebrities came out to show their support for minimizing Mill’s jail sentence, including Rick Ross, PnB Rock, and Vinny Curry of the Philadelphia Eagles.

A rally for native North Philly rapper @meekmill took place tonight. Our reporter got videos of all of it featuring @pnbrock, @richforever, Meek’s relatives, and his fans, who were all in attendance for this rally. More to follow. #Rally4Meek

At one point, PnB Rock joined in the chants to show his solidarity with the large crowd.

Participants in the crowd expressed their distaste for the current criminal justice system towards Mill’s case.

“As a social worker, we pledge to fight against social injustice,” said Keisha Cooper, a Temple graduate. “I feel like this is a case in particular where there has been some injustice and it is unfair judgement and punishment.”

“If we don’t stand for anything, we will fall for everything.”

While the rally wanted to bring up the unfairness of Mill’s sentence, it also highlighted on the corruption of our current criminal justice system for other individuals facing unfair jail time.

“I’m out here standing with Meek, but I believe this is much larger than Meek,” said Trine Smith, a Philadelphia Native. “This [criminal justice system] is an extension of mass incarceration, a school-to-prison pipe line, and basically modern-day slavery.” 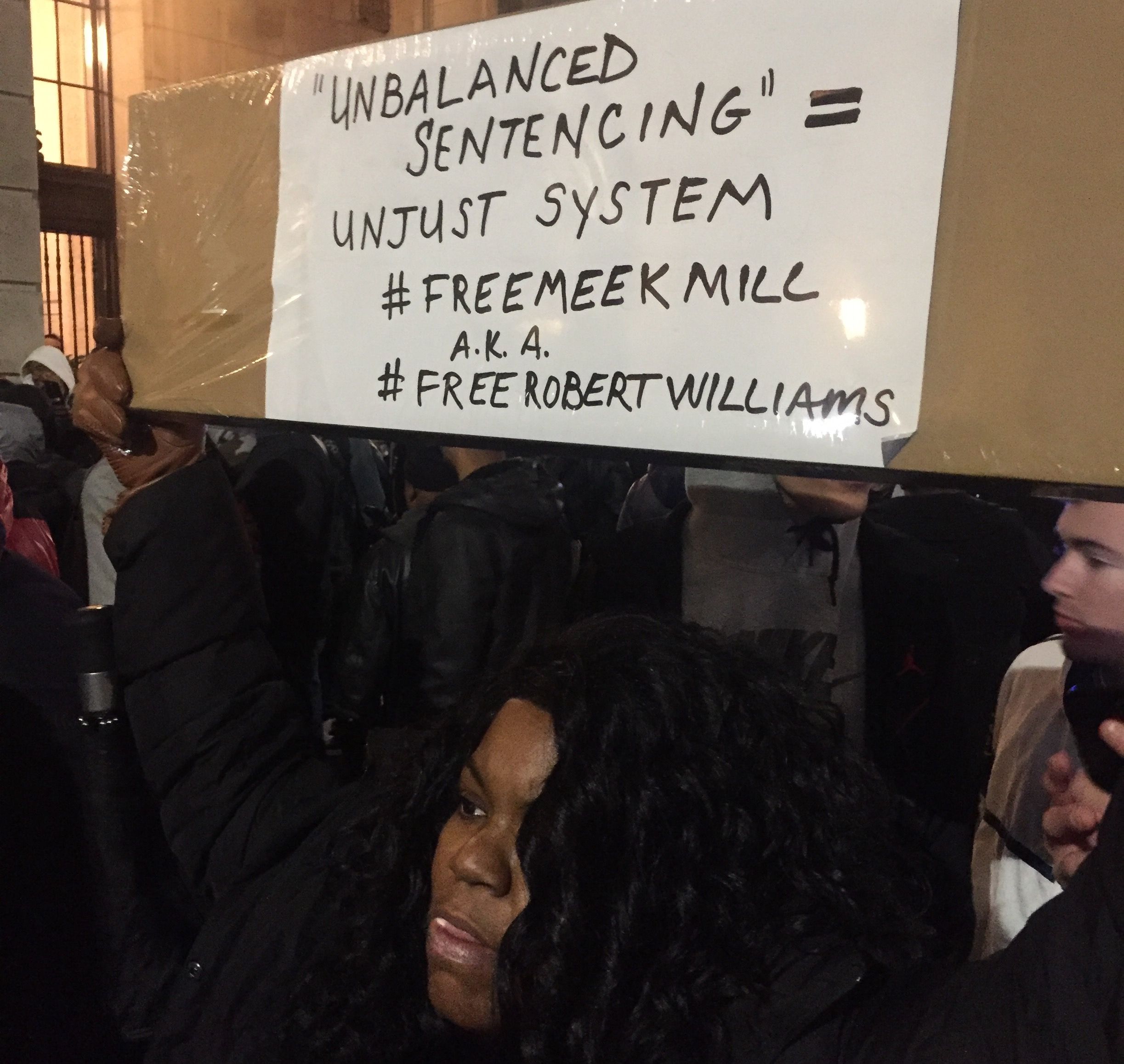 Meek Mill has been arrested before, starting at 18, and it appears that his past continues to haunt him.

At 18, he was arrested for bringing a gun into a grocery store, resulting in him being severely beaten by police officers and was convicted for 11 to 23 months.

Even as Mill continues to grow up and learn from his lessons, the system continues to affect his life as an adult.

A noticeable trend of school-to-prison pipeline has been seen with Meek Mill, but also with other people of color who are sent to prison and given an unfair chance at fighting against their sentencing due to their actions when they were younger.

“They need to free Meek Mill, this has been going on since he was a teenager,” said Tonia Helms, a relative of Meek Mill. “So many years of his life they have taken away and they are still trying to take more time.” 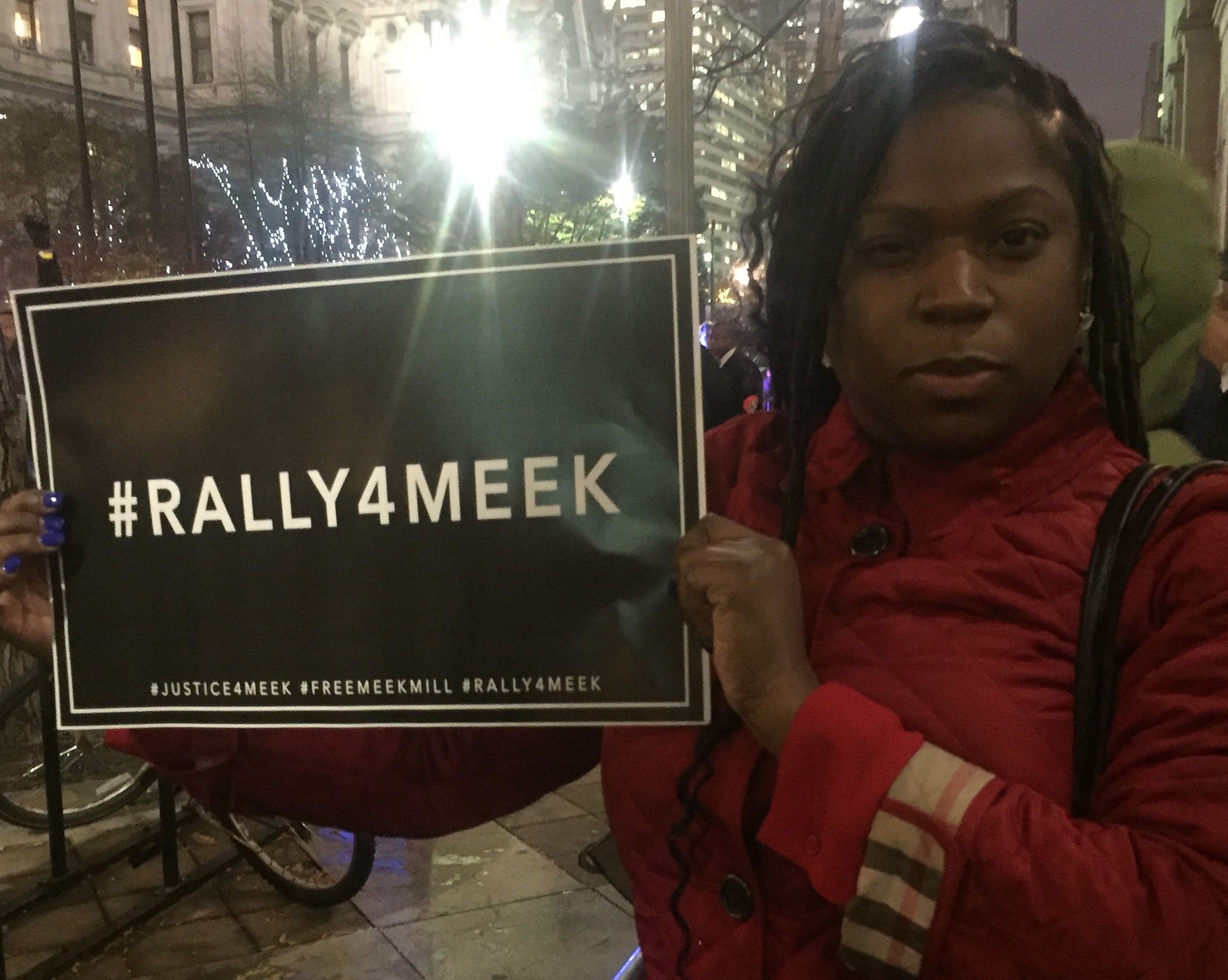 Tonia Helms is a relative of Meek Mill at the rally.

“People are in prison for life for crimes that were minor or that they have not committed, and we need to fix this system.”

The rally gained a lot of momentum later into the night where at one point, participants began to take the rally to Broad street, a major street in Center City.

The crowd sang some of Meek Mill’s most noticeable songs, including “Dreams and Nightmares” to show their solidarity with the rapper.

A petition from Governor Tom Wolf to have Mill’s sentence remedied continues to gain support, reaching over 300,000 signatures since the launch of it last week.