Temple alum creates a series to celebrate womanhood in Philadelphia

The Electric Lady Series is for women by women

Sofiya Ballin, a features reporter/host at Philly.com, blogger for Huffington Post, creator of #BlackHistoryUntold, and a Temple alumna created a week-long series called The Electric Lady Series from March 21 – 26th 2017.

Each day the series hosted an event featuring a specific theme that explored women in entertainment, media, technology, health and advocacy.

6 PM Instagram Live Stream for "I Am Woman" Feminism Discussion ⚡

The Tab Temple spoke to Sofiya about The Electric Lady Series and how she organized this series with the four other organizers.

Why did you create The Electric Lady Series, and how did you get the inspiration to create it?

“I created The Electric Lady Series since I felt we needed a space for women to listen to women’s voices in various forms. We had the intersectional feminism panel where we talk about feminism not being just for White women, but it’s also for Black women, Hispanic women, Trans women, Queer women, Muslim women, disabled women, older women–all these different women fall under the same umbrella, so we had a conversation of how to keep your feminism intersectional.

Day two was a boss-lady panel, where women of color spoke about where they are today, how they started their business from the ground up and how other women succeeded since these days entrepreneurship can seem like a boy’s club, especially like a white boys club.

On Friday we had an all-women art showcase with the theme being Queen Latifah’s hip hop song U.N.I.T.Y since the song deals with domestic abuse and catcalling. The song was a reclamation of womanhood, and we had a bunch of woman artists pulling from lyrics and themes from that song and then creating artwork from it.

At the Freakum Dress event, I wanted women to be in a space where they could hear their voice.”

Was it hard to create this entire series?

“Yes, it was very hard! I started this while I was working on my other project for my job called Black History Untold and I realized I wouldn’t have enough time and no money. If it wasn’t for the sponsorships or the team that I had–who I knew always took initiative and who gets stuff done–this series would not have been successful.

Each person on the team led an event, and they killed it. The intersectional feminism panel was led by Lara, the boss lady panel was led by Alexis and Melissa, the art show showcase was led by Keturah, Freakum Dress was led by me, and Cranes in the Sky was led by Helanah. It was a bunch of women who came together and believed in this for two months. None of us have taken off of work this week and we had events back to back. However, this is the best kind of stress.”

Excited to have @ayo_tabz showcase her work at our art showcase!!! March 24. Check the link in the bio.

Are you planning to do this again next year?

“Because of the amazing and beautiful team I had this year, I would definitely do this again next year. We organized this series quickly in two months with only two weeks of promotion, and I know anything is possible with my team. I can’t imagine how much more we could accomplish if we had a year to do this.” 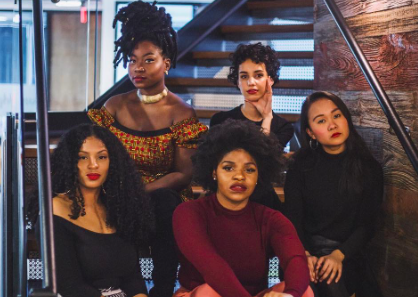 How do you feel after this turnout of the whole series?

“The biggest thing I’ve taken from this is the beauty of the woman energy. I feel amazing and I knew this would resonate with a lot of people including myself, but I just didn’t realize how it would. There’s been so many moments where I would realize that this is bigger than my team and I.”

As a Temple graduate, do you feel like Temple has prepared to create an event like this?

“Of course! I was the president of a student organization for Caribbean awareness and many of the connections that I have are through that organization. My team leadership skills came from holding that role and I’ve met one of my team members from there too. I know how to lead an excellent team and Temple has definitely prepared me.”