A Temple student has told The Tab Temple she was called a “stupid ass nigger” by a stranger in the early hours of Sunday morning at 17th and Montgomery.

Hana Ford, a Public Relations junior, was at home with friends when she heard loud noises outside at around 1am.

“There were a crowd of people gathering on my street causing a scene and many people were speculating that someone was hit by a glass bottle or ran over by a car,” she said.

Hana and her friends went to see what was happening and saw an injured girl sitting on the curb of the street surrounded by a group of people. The injured girl had apparently just been hit by a car and police were on the scene.

One of Hana’s friends was recording what was happening on Snapchat. Hana told The Tab Temple that’s when the injured girl’s friend came up to them.

“We were about to leave when my friend took a Snapchat of what was occurring. That’s when the injured girl’s friend who was consoling her comes up to us,” she said.

“My friends and I were probably the only few black people there. So she walks up to my friend and she’s like ‘Put your fucking phone away right now. I see you fucking recording my friend and me. Delete the fucking video.'”

Hana said she responded to the girl by saying: “Hey, she’s not going to delete the video and if you’re really concerned about your friend then you don’t have to stand here and harass us.”

“The next thing we know, she’s taking off her jacket and removing her purse like she’s going to fight me,” said Hana. 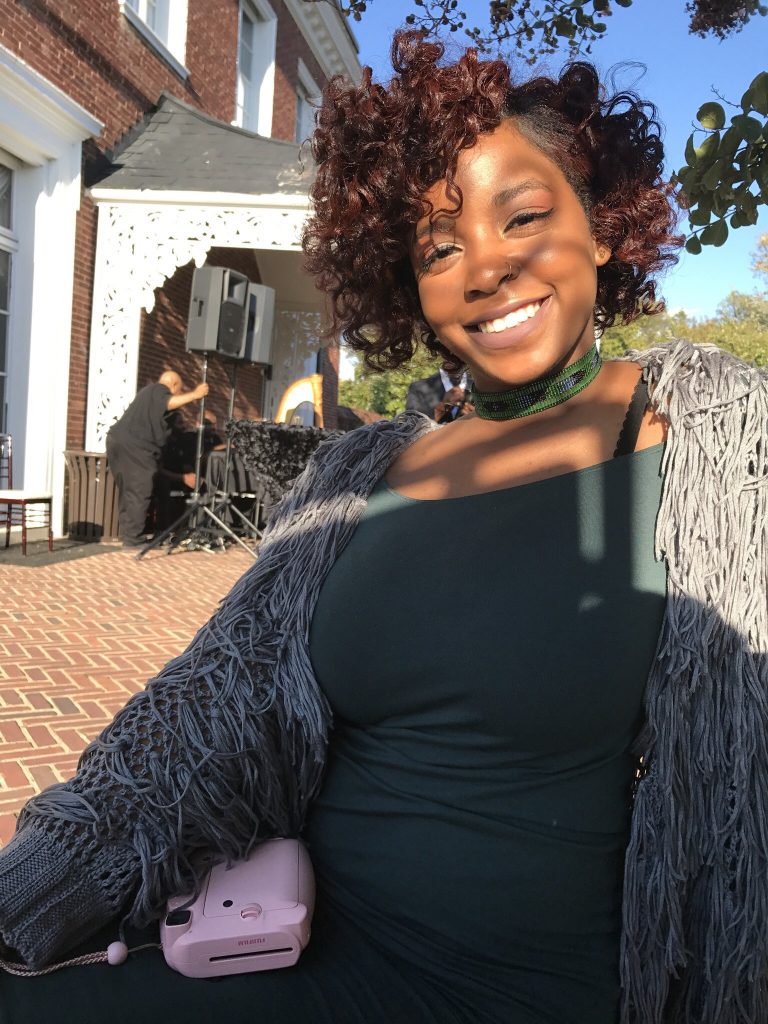 According to Hana, around 10 police officers were on the scene at that time and some of them intervened when voices were raised.

“I wasn’t raising my voice to her prior to her removing her purse and once she did, I began to speak louder to her if she was considering to fight over this. The police came in between us trying to constrain me. It felt like it was very clear who the police saw as the aggressor but it was her who was starting this uproar.”

“She was saying this all in front of the police and we were told to just go into the house. They were trying to tell me to be quiet but not telling her to be quiet. They continued to see me as the problem but it was her using inappropriate language and unfortunately I knew how this situation always goes. I decided to do something that many black people do in situations like this with the police because I feel like no one is there for me or to support me.”

Following the incident, Hana posted a photo she took of the girl to Twitter asking her followers to identify her so she could report the incident to the Dean or disciplinary board of Temple University.

ALL TEMPLE STUDENTS IF YOU KNOW THIS GIRL PLEASE GIVE ME HER NAME & IF POSSIBLE HER CONTACT INFO! pic.twitter.com/x5ompGb2VP

The tweet was retweeted over 400 times and the girl was identified as Twitter user @treude_chainzz, Makayla Treude. After being linked to the photo, Makayla posted a screenshot of a note she wrote regarding the incident. It said:

“So let’s all get it straight. My friend got hit by a car last night and after the cops came and everyone wanted to see what was going on a group of black people came. They stood there laughing and recording it. Tell me you wouldn’t be mad as shit if your friend just got hit and people are standing there laughing and recording. I didn’t just say the N word for my health. It was wrong to say but in the heat of the moment I did not give a fuck. You don’t see me crying over people calling me white trash and a cracker do ya?? Nah.” 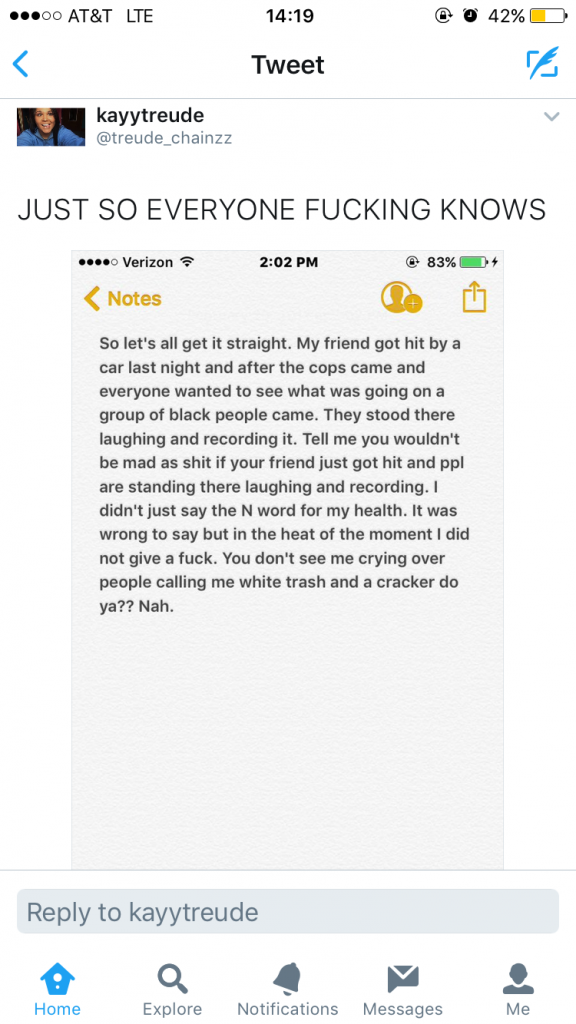 Makayla deleted the note and set her account private on Sunday evening. She is not a Temple student.

Hana says Makayla’s excuse of a “heat of the moment” reaction “wasn’t sincere.”

“If it was a heat of the moment type of thing, she wouldn’t have said it more than once,” she said.

When The Tab Temple reached out to Makayla for a comment, she said: “I would like for everyone to stop harassing me and understand that I know using that word is not okay and I am sorry for it.”

This isn’t the first time a racial slur has been a trending topic among Temple students. Last semester a student called out her roommate for calling her a “a fucking nigger.” Temple did not comment on that incident, and Temple’s NAACP branch voiced their concern in a press conference.

Hana told The Tab Temple she believes we shouldn’t normalize this language and that it’s time for our community to speak up about it.

“It’s so often that you come in counter with different colors or different backgrounds and a lot of people don’t see the racism happening on the surface and they think it doesn’t happen. In reality, a lot of people feel a certain way towards others and they’ll never say it until they are put in that situation,” she said.

“Our school has branded itself with diversity, but we need to hold our students, faculty and community accountable to others and this isn’t the first time this has happened near Temple’s campus.”

Hana said she doesn’t feel valued or respected as a student at Temple when incidents like this occur.

“Racism exists, and this is happening today. I feel like Temple needs to be aware of this type of behavior and create safe spaces for people of color. I have been a student at this school for a long time and I don’t feel valued here or that people respect me,” she said.

“What good is it that I go to this institution that’s taking my money and they don’t even care who I am as a person.”

The Tab Temple reached out multiple times to Temple Police for a comment on the incident.