It’s one way to pay off your student loans

Seeking Arrangement, the sugar daddy dating site, has announced the highest schools for 2017 – and Temple comes out on top.

The dating site released its annual findings, “Fastest Growing Sugar Baby Schools” with the most students registering for its services to subsidize their education costs by becoming sugar babies. 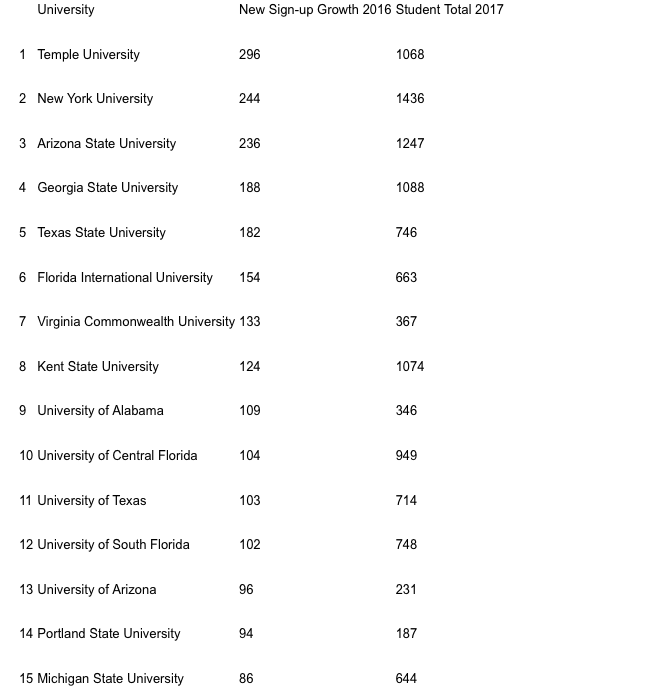 In 2016, 1,204,980 students registered on SeekingArrangement to find Sugar Daddies to help pay for their tuition and other costs associated with their pursuit of a college degree. This is an 11 percent increase of students agreeing to become a Sugar baby from the previous year reported by the website.

“$1.3 trillion, 43 million, and $35,000―while it’s easy to get lost in the numbers, the truth is we have an epidemic on our hands,” says Brandon Wade, founder and CEO of SeekingArrangement.com. “Students are tired of hearing politician’s hyperbole about what they might do to resolve the student debt crisis. They’re taking matters into their own hands.”

SeekingArrangement reports the percentage of college graduates with student loan debt is higher than those that are employed full-time in a position utilizing their degree. Along with the uncertainty of a new presidency, many students are resorting on wealthy benefactors to fund their education.

The average cost of tuition at public four-year institutions have increased by 9 percent between 2011-12 and 2016-17. It’s reported Americans owe nearly $1.3 trillion in student loan debt with an estimated 44 million borrowers and the average Class of 2016 graduate has $37,172 in student loan debt—up from six percent from last year.

Students who have chosen to become Sugar babies see an average monthly allowance of $2,400 by using the services of Seeking Arrangement.

Many of the Sugar Babies are able to dodge becoming a statistic of students with loan debt and the rise of users are continuing to increase with more college students choosing this route.