Why Chrissy Teigen is the role model for every college girl

She runs Twitter and she dgaf about your opinion

Chrissy Teigen, top model, television host, author, mother, and yes, John Legend’s wife, has done several things few other celebrities have managed to do in the past few years. She uses her Twitter account as a platform to speak (often hilariously) on important issues, she’s publicly mocked Donald Trump, and her personality has seemingly remained unchanged since she became famous.

It can sometimes be hard to relate to celebrities, but if you follow Chrissy on Twitter, you know she’s outspoken and is not afraid to call you out on your shit. And this is something we can definitely relate to.

That’s why on her 31st birthday, every college girl should consider her as a role model, since she’s the perfect example of an empowered and badass woman.

I am pretty sure you could clearly see I'm a lady. https://t.co/WmOtIhwaaR

It’s frustrating to see men online and even in person judge a woman because of their wardrobe. What we wear does not define who we are and if we want to show more skin than it’s our choice. As college women, we should take a note of Chrissy’s response. She didn’t let a man insult her because of what she was wearing. Clearly, the guy had no fashion sense anyway.

Did you really think Chrissy was going to let a photographer curse at her? Nope and neither you, Chrissy might be a celebrity but she deserves respect as she poses on the red carpet. Some might say it’s not classy but they deserve a big F*** you too.

She’s not afraid to speak out on politics

No because unlike Donald, I have enough self-awareness to know I am ridiculously unqualified. https://t.co/YUuqqdCBHn

Chrissy is the queen of speaking out about her disapproval of Donal Trump and she dgaf about the numerous internet trolls who come at her for it. She continues to demonstrate that we should voice our opinions loudly and clearly and never be afraid of what the haters have to say about it.

Even as a model, she owns her stretch marks

Although she’s a model and incredible gorgeous, the fact she posted this was significant to her 9 million followers on Instagram. It’s time for women — especially college women — to not be afraid of posting pictures where we don’t look perfect. It’s time to embrace our bodies, whatever they look like.

She doesn’t hide her emotions 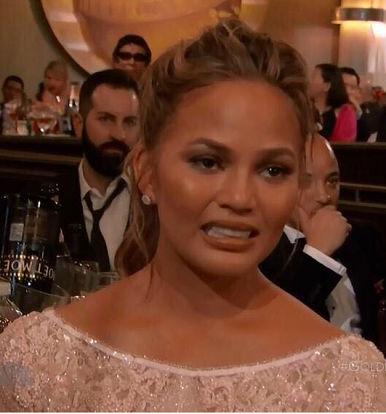 Remember when Stacey Dash (the one-time Clueless star who recently called for an end to Black History Month) made an incredibly awkward appearance at the Oscars? Yeah, Chrissy’s face was all of us.

She’s not afraid to make fun of herself

"Hey baby. Do those legs go all the way up?" – dead. Thank you @qween.memes ? #familyguy #spongebobsquarebodinaworldofbooty

Some people take fashion criticism as an insult, but Chrissy takes it like a babe. After an epic dress choice that might have broken the world record for the highest slit dress, Chrissy joined in on the memes of her from the American Music Awards.

As she said on her Instagram, “Apologies to anyone harmed mentally or physically by my hooha.”

#AMAs! love you so so so much @jenatkinhair @1maryphillips @monicarosestyle @kimmiekyees (apologies to anyone harmed mentally or physically by my hooha) dress is #yousefakbar and shoes are @dsquared2 and laser hair removal is @sevlaseraesthetics

In college we are exposed to the finest male specimens — from the typical jock to the frat boy who wears the same damn outfit everyday. Chrissy and John are a healthy relationship to look up to, since they seem to truly accept each other and support one another in their own endeavors. During the times Chrissy has been criticized for her words or actions, John has always stood by her side — and that’s damn respectable.

Funny there's no dad-shaming. When both of us go out to dinner, shame both of us so Chrissy doesn't have to take it all. We'll split it.