It’s in our blood to work hard, no doubt about it

I live with guilt knowing the money my parents have worked for is being spent on me. My mother would tell me “El dinero no lo es todo, Gail. Tus padres trabajan duro para tu futuro” (The money is not everything, Gail. Your parents worked hard for your future).

My father is 70 years old, and he refuses to stop working in his construction job. Why would a 70 year old man keep on paving roads in the hot burning summers of New Jersey for a construction company? I asked my father the same question when I asked him to stop working.

However, his answer was simple: he can not stop working since he needs to provide for his family. 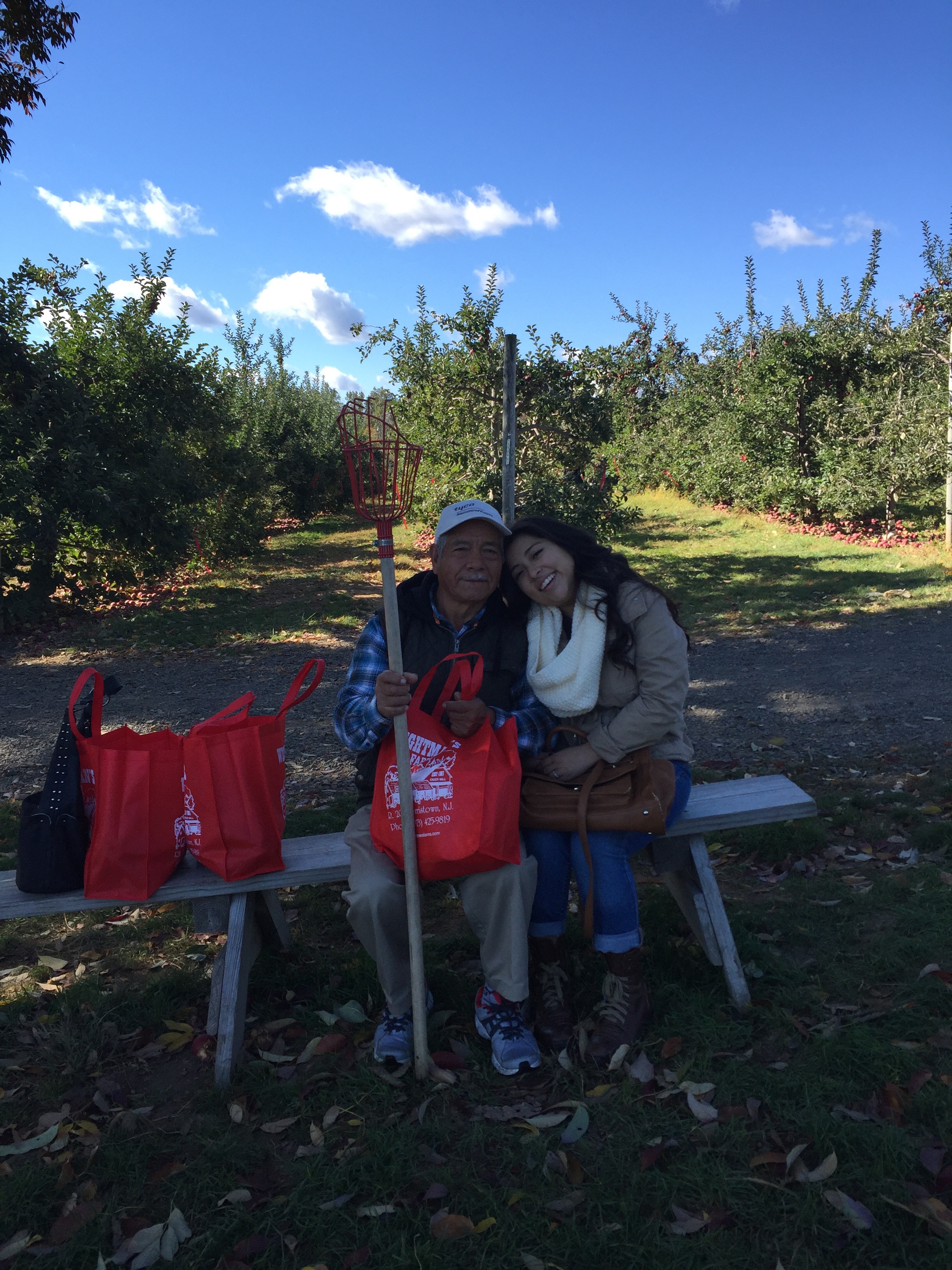 I could work off the loans for college and get a job, but my dad says I don’t need to. It kills me everyday to see him work this hard for us, and I wish my dad didn’t have to work from 5 a.m. to 6 p.m. at his age to pay for mortgages, house expenses or college tuition for me and my brother. There have been times I’ve considered of transferring to an in state school, solely so he didn’t have to pay for out of state tuition.

I remember asking my father if I could just stop all of our troubles by going to community college so we wouldn’t have to worry about paying a hefty tuition of $20,000. However, as my dad was listening to me rant, he just slowly hugged me a little tighter and said to not worry about it. He said it was going to be hard, but it was the sacrifice he made when he decided to come to the United States.

When I was little, my parents refused to buy me the luxuries my classmates had. Everyone had a smartphone and the designer shoes while I had Payless shoes and a Tracfone phone until high school. I never thanked my parents for this, but they never wanted to have it all handed to me. I think about how much my dad and my mom worked hard to provide me with the necessities I truly needed, and I’m so glad that I didn’t take it for granted.

Once I visited my parent’s hometown in Peru, I finally learned the true meaning of sacrifice and why their stories should be heard. 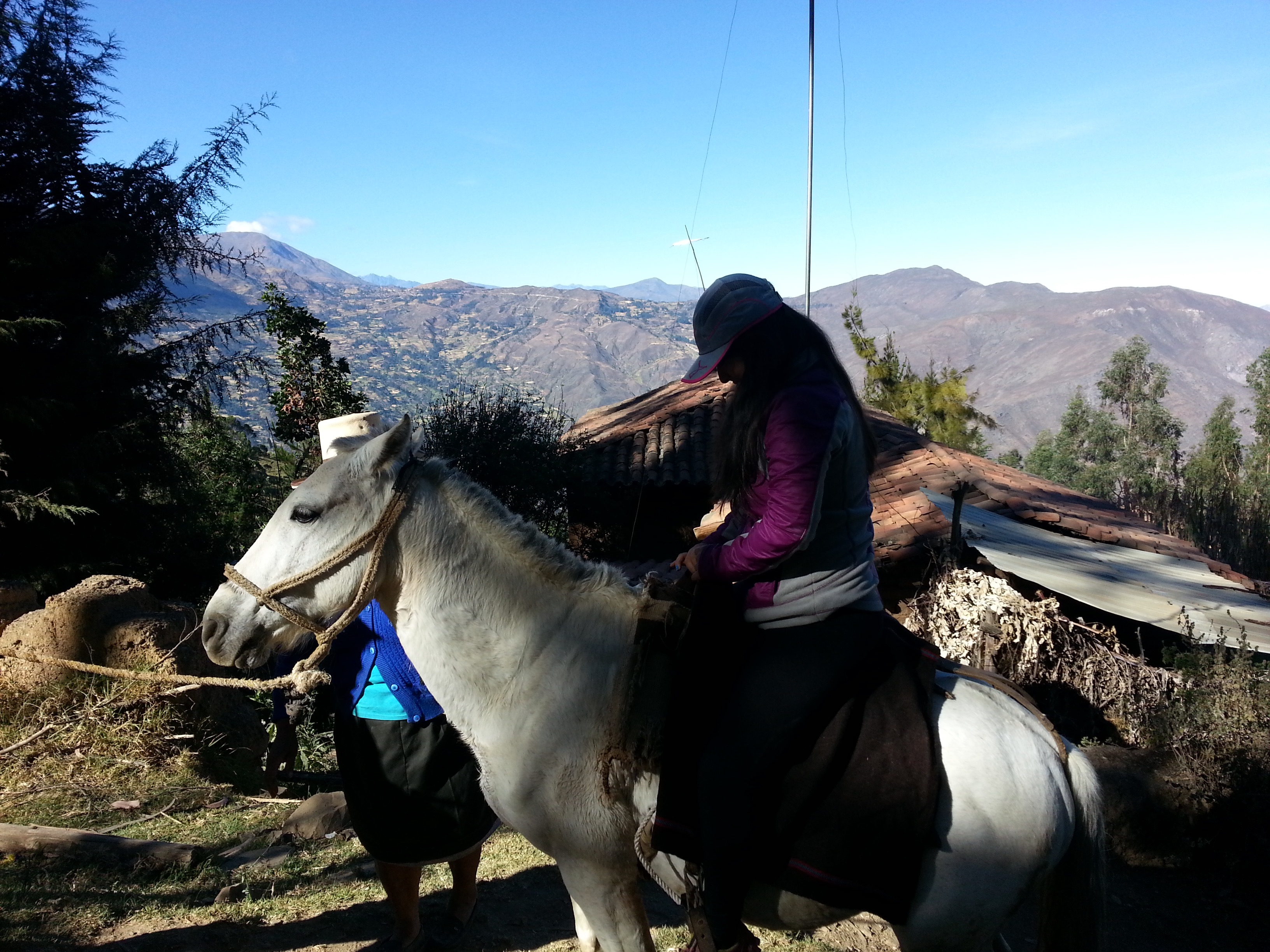 I traveled back to Peru, two years ago and my life changed ever since

My parents both grew up in Cabana, Peru. This small town might seem ordinary, but it is far from just a mountainside village. From the food to incredible views of nature, nothing can ever compare to how I felt when I visited Cabana. I gained a background of how much it really meant to leave a town like this and the people behind. My dad was in his early 20’s and my mom was only 16 when she left; both of them had to drop out of school to work in the city to provide for themselves. In my father’s case, he would send my grandma money every week until the day she passed away.

When my mother left Cabana, she had been aiding the elderly of the town by cleaning and cooking small meals for them since she was 13 years old. Once she turned 16, she was offered a job in the city by one of her uncles to become a nanny to a wealthy family. After becoming a nanny for a couple of months, she was asked if she wanted to travel to the United States with a work visa. My mom couldn’t refuse this, and before she left, she traveled back to Cabana where she said her goodbyes to her nine siblings. It would be 20 years until she saw them again, but as she tells me, the chances of her leaving were better than her staying in a place where she knew she was going to continue a cycle. 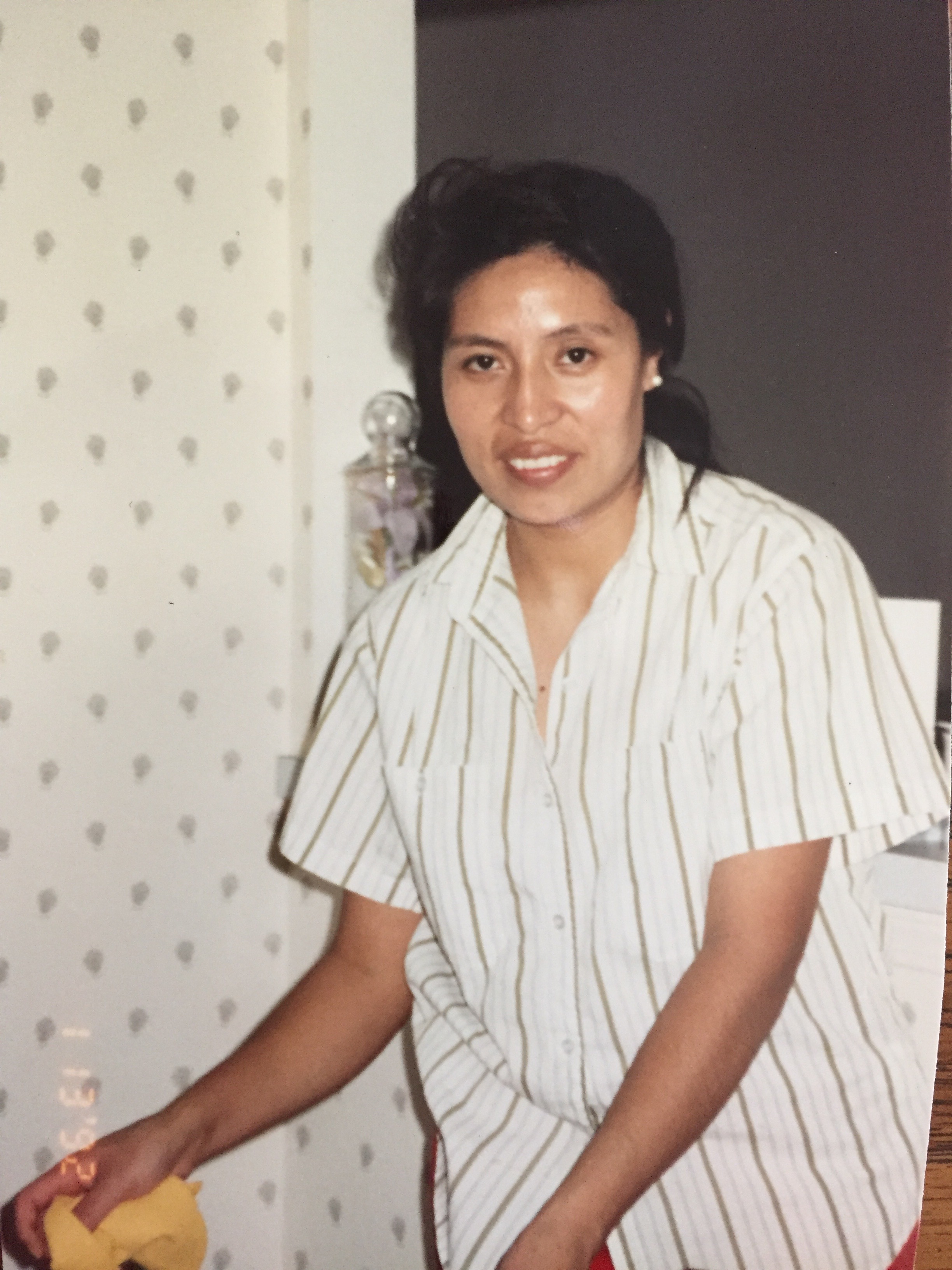 Even though she earned less than minimum wage and approximately $200 every month, she tells me it wasn’t the money which mattered to her then. The family whom she was a nanny to allowed her to have a place to stay for free and the kids loved her as their own mother. She was lucky enough to have found a good family to take care of her which is rare for many immigrants to find in California.

I always found it astounding how happy she would get when I asked about her nanny diaries. It was always my favorite time to bond with her when she mentions the countless memories of traveling from coast to coast with the family. It was like she was suddenly living again; she wasn’t an average housewife at home anymore. Instead, she was that young girl who traveled afar to just earn money to make a living.

My father’s immigration story is different from my mother’s, but it’s  a typical story for many immigrants from South America. My father worked to earn enough money to get an airplane ticket to Mexico, and once he got that, the next step was to find a coyote to aide him in crossing the border of Mexico and the United States. If you don’t know how dangerous the coyotes are, the National Review says these human smugglers are not always the type to keep their word. Many of them make the people pay expensive fees and even ask for ransom from their relatives.

I asked my father about the whole ordeal, in which he had to hide in the back of the trunk, specifically in a large suitcase, to hide from the border control. But this was not the hard the part for him. Rather, it was the number of people who didn’t make it that stuck out to him. Children and women were kidnapped and raped by coyotes or died on the way to the United States. Many of them are forgotten in the media.

Afterwards, my father was blessed to find a construction job where he continues to work today, 20 years later. Sometimes I asked myself, if I could truly continue being in college, knowing that I’m going to be in debt for so long afterwards. However when I do, I remember the story my dad told me. 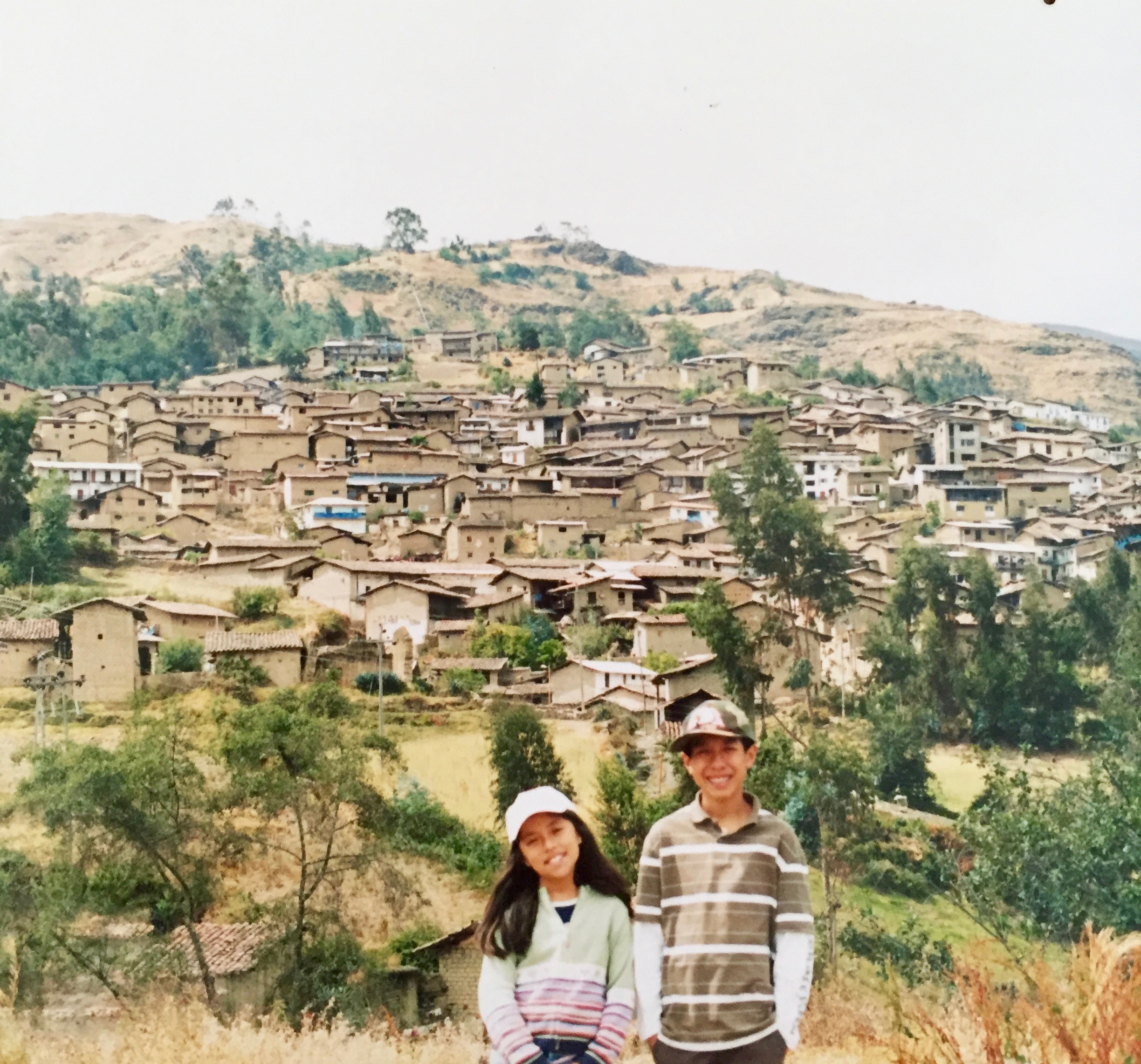 My first photo in Cabana, Peru

When an earthquake occurred in Cabana, my dad was frantic not knowing if his family were okay since radio announcers were saying the whole town was destroyed. What would have taken him nine hours in a car today, he instead walked for five days to Cabana from the capital of Peru. I asked my dad, why would he even compare an earthquake to my college dilemma?

My wise old man said that my five day journey would be different from his. If there’s one thing that I could give him to repay for all that he’s done for me, it is to simply get the education that he was never offered.

For this reason, skipping a day of class seems nice, but then I think, if my parents were lucky to be me right now, they wouldn’t dare to skip even one second of an education. I’m living the dream that they wanted and the sacrifice they went through is the reminder to keep on going.

The millions of lives that were lost crossing the border and the kids that I know in Peru, who have told me or even looked at me with envy of my clean clothes and shoes, are my inspiration to fight for their voices to be heard in the media. If my parents could sacrifice for their future children, then I can proudly do the same for my children and other Hispanic children out there. My dad was right: my journey will be different from his, a different type of struggle that I hold dearly in my heart. But as my parents told me to remember, “Somos latinos, unidos para siempre” (We are latinos, united always).