A woman says she was assaulted by Temple students Friday night

She claims they shouted racist insults too

A Drexel student claims that “last night around midnight to 1am” she was physically assaulted by male Temple students.

In a post online she claims they also spouted racial slurs and implied they wanted to to take her life.

The woman, who goes by Gabby, was planning to throw a surprise birthday party for her boyfriend. Later in the evening, between midnight and 1 am, she stepped outside for fresh air. Several men were outside and to Gabby’s knowledge they were Temple students who may have frequented a house on N. Bouvier St.

Gabby said she “asked for a cigarette to one of the guys” and their only reply was “they’d only give [her] one if [she] sucked their dicks.” The men in question also made “dehumanizing sexual comments” towards her. As Gabby responded by calling them out for making “sexually lewd statements,” the men in question responded by directing racial slurs at her.

According to the victim, as the men were “screaming Nigger bitch and Harriet Tubman ass bitch” and other demeaning slurs, they threw drinks in her face. 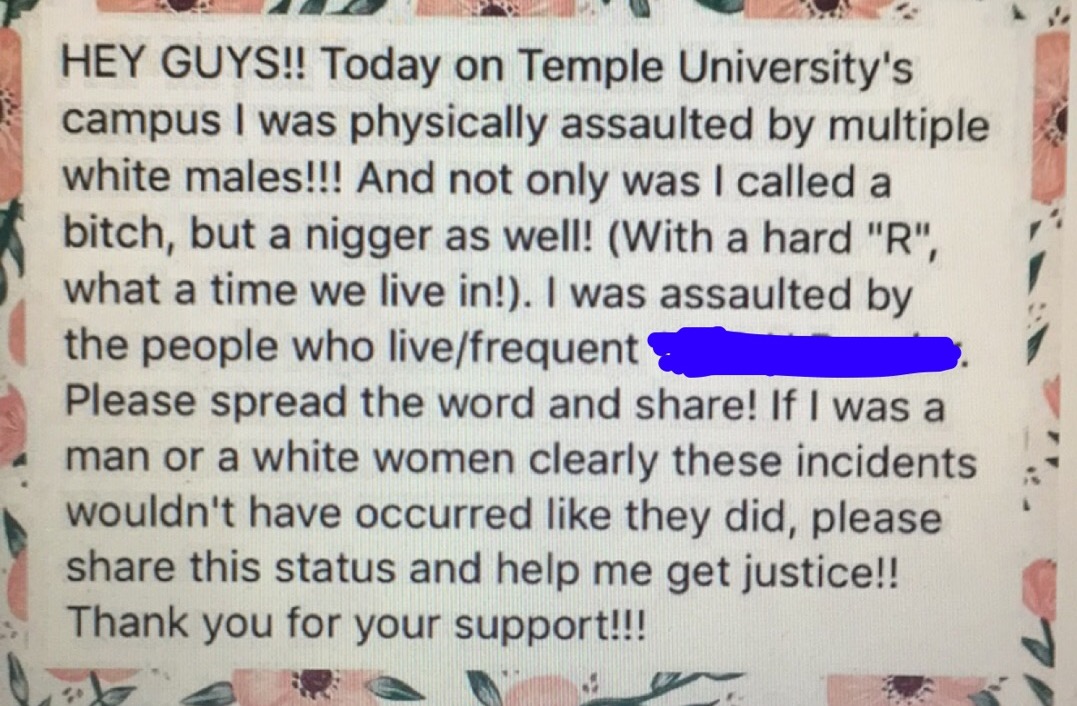 Gabby further explained she ultimately went to the house her assailants allegedly came out of, to bring awareness to the residents. She recalled one man, who self identified as one of the house residents, allegedly saying “I don’t care, you don’t even go here.”

Gabby had since reported her attack to the TUPD, but has clearly noted in her Facebook post that the likelihood of justice is slim because she is a black woman and her assailants were white men.

TUPD declined to comment and no word yet from Temple University officials.