The cause is gaining likes fast

Ever since the university first announced the intention to build a stadium on Temple’s campus, students and members of the community have been adamant in their disapproval. Groups like the Stadium Stompers have organized meetings and protests to voice their anger with the plans, and today, one more student took a stand.

Henry Blosfelds, a junior film major at Temple, wants to scrap the plans for Temple’s on campus stadium and instead erect a statue honoring the star of the TV show Californication, David Duchovny.

He created a Facebook group for his cause and posted the link in Temple University Class of 2017 early this morning. The page already has 27 likes.

The Facebook group’s description reads, “This is a Student Organized Petition to Replace the Proposed Temple Football Stadium with A single Statue of David Duchovny, Star of Californication.” 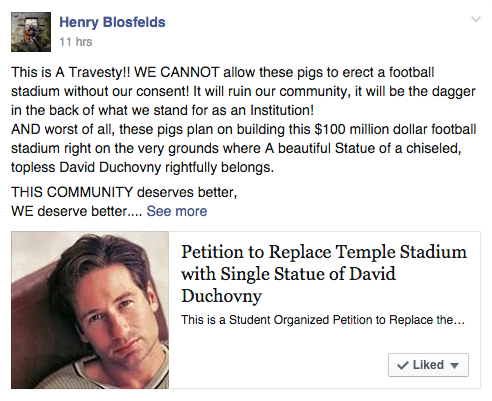 The Tab reached out to Henry to ask him why he chose this particular alternative to a stadium on campus.

“David Duchovny represents all the qualities that this institution represents: Respect, Love, Passion, and also, have you seen that face?”, said Henry.