A non-Jewish person’s guide to celebrating your first Hanukkah

Step 1: figure out how to spell Hanukkah

Before coming to Temple, I had never been exposed to any sort of Hanukkah celebrations. I grew up Protestant and I went to a pretty WASP-y high school in Lancaster County. We only had one Jewish kid in my class and one year, before our winter break, a Social Studies teacher had him give our class a presentation on Hanukkah. He let us pass around his dreidel and told us the story of the oil that lasted eight days. Otherwise, I was pretty uninformed about the holiday.

So when my friend Dylan Keith texted me a couple weeks ago, “Hey, wanna do a latke and vodka night?” I was like, “Hell yeah, but what’s a latke?”

(A latke, my non-Jewish friends, is an oily, fried, potato pancake-like creation on which one typically puts applesauce or sour cream. They’re delicious.)

To cure me of my ignorance of Jewish culture, Dylan invited me to celebrate Hanukkah with her and her roommates, two of which are also Jewish.

I was excited to learn about something I knew so little of but was important to so many of the people I’d met at Temple. The first couple years I’d been here, I’d seen more menorahs than I had in my other 18 years combined. And Dylan was happy to share with me a tradition so central to her life. 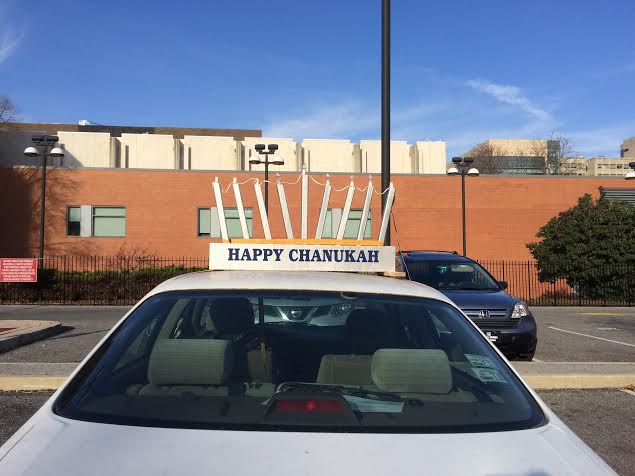 We wanted to get together and do something for each of the eight nights, but unfortunately, they coincided with Temple’s study days and the first finals week (way to be respectful of all religious holidays, Temple).

So on the third night of Hanukkah, I went over to Dylan’s for the lighting of the menorah. She and her roommate lit the shammus candle (the one in the middle), and with that, lit the first two candles in the row for the next two days of Hanukah. Meanwhile, they sung in Hebrew the prayer of Hanukkah. 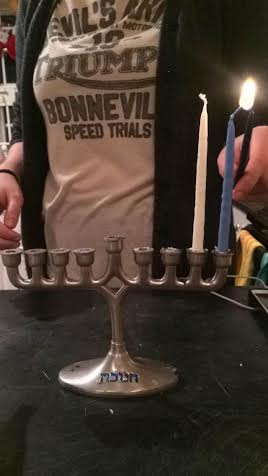 Dylan taught me some of the details of the ritual: how it’s important to light the candles from right to left (in the direction Hebrew is written) and how you’re supposed to let the candles burn through the night, but because of the fire hazards, it is now acceptable (encouraged, really) to blow them out before going to bed.

She showed me the rest of what was in the box of Hanukkah goodies her mom had sent her: some dreidels, gelt (in this case, just chocolate coins to use when playing dreidel), and some Hanukkah stickers. She and her roommates stuck them on their Christmas stockings. 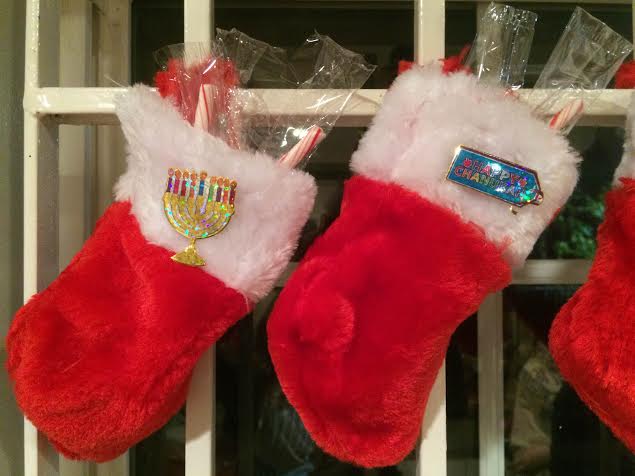 They also set up the menorah right next to the Christmas tree. It’s a real melting pot of cultures here at Temple. 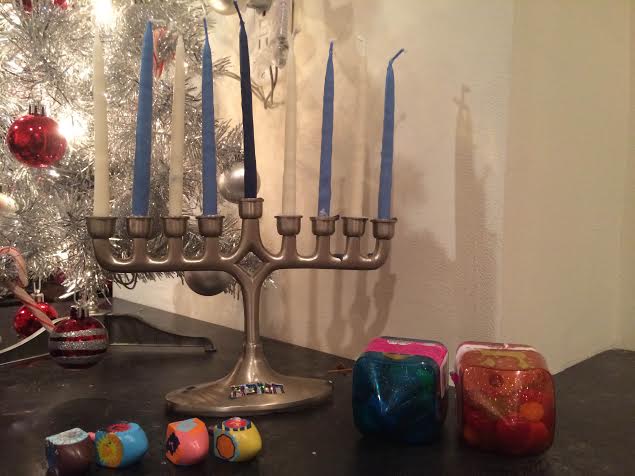 Our next Hanukkah activity was the one I had been hearing about for over a week before our celebrations: making the latkes.

After a few hours studying at the tech (again, way to be observant of other people’s religious observances, Temple), I accompanied Dylan to Fresh Grocer where she bought about a dozen potatoes.

I came over later that night to find Dylan and her roommate in the kitchen with a blender and hundreds of tiny potato peelings speckling the cabinets, counters and floor. I watched with curiosity and poorly concealed disgust as they used paper towels to soak up the potato water from a huge bowl full of potato shavings. 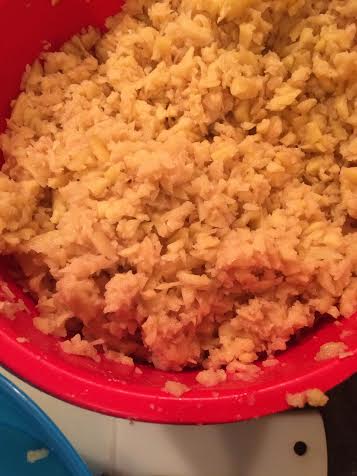 They then threw balls of the potato shavings into a frying pan sizzling with an unsafe amount of oil. Apparently the menorah isn’t the only fire hazard associated with this holiday. 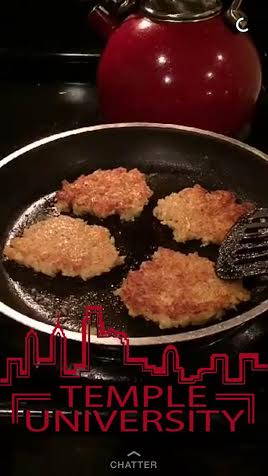 I’m not normally a fan of potato products (French fries are bland… Yeah, I said it), but I scarfed down about five whole latkes. They’re freakin’ delicious. And they pair surprisingly well with applesauce.

I told Dylan the last thing I really wanted to try for my first Hanukkah was to play dreidel. I was interested in eating some chocolate coins to finish off my latke dinner. She admitted she didn’t remember the rules, so we turned to our friend Google.

The instructions used a bunch of words I couldn’t pronounce to refer to the symbols on each side of the dreidel, so I let Dylan read them. Basically, each person spins, and depending on which character faces up when the dreidel stops, that person performs a specific action with the gelt. Gelt can be money, but we’re college students, and we don’t have any. Chocolate coins, it was. We actually got bored of the game pretty quickly, so we just ate the chocolate while we watched the Victoria’s Secret Fashion Show. 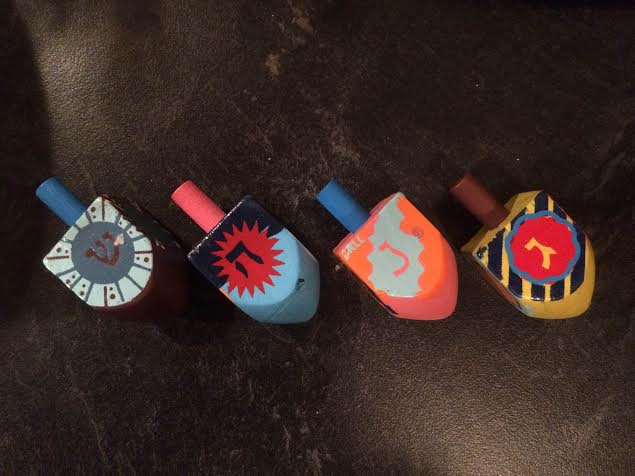 The rest of the week we spent cramming for finals (one more shout out to Temple U.), so we weren’t able to get together for any more Hanukkah celebrations. But Dylan had sent me home with my very own dreidel, and I craved latkes for several more days. I also walked around with a little more holiday spirit, because I got to partake in not one holiday, but two.

A big thanks to Dylan Keith for including me in your Hanukkah celebrations. See you at Passover.