One… no, FOUR students attack… I think? – DPS

An incident occurred in our community on Saturday February 9th, at approximately 12:40am. According to DPS, “three students reported being approached by an unknown female in the 800 block of Ackerman Avenue. The students say the female displayed what appeared to be a silver handgun and struck the students with the gun. The suspect fled the scene on foot… All three students sustained minor injuries and declined medical treatment.” The Department of Public Safety released a Public Safety Notice.

All students receive similar emails at least a few times a year, and it’s always terrible to know that a student in our community has been hurt. This time, however, proved to be different when students began to note that the report was NOT accurate. 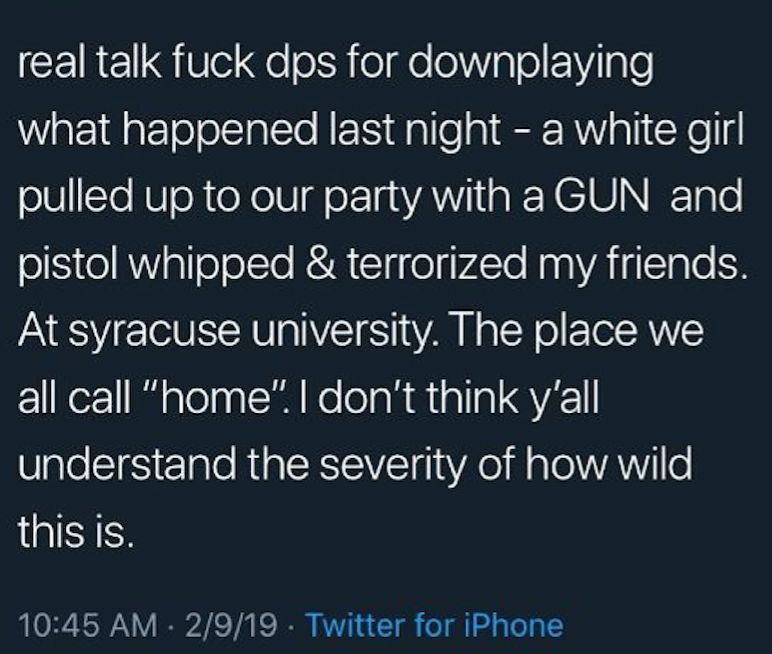 We received this statement on Sunday, February 10, 2019, directly from an eye witness, who asked to remain anonymous.

… three Syracuse University students were approached by a group of four Caucasians and two of the attackers preceded to assault them. The attack occurred at the closing of a birthday gathering that was being held at the 800 block of Ackerman. Approximately 10 students were downstairs when they heard loud noises coming from the porch. Three of the student’s went to investigate the noise on the porch when they were immediately attacked by one female and one male. The first victim noticed that the assailants were attempting to to enter the premises and was called “n*****” from the male and then repeatedly hit in the head by the accompanying female with a silver metal pistol.

This source was able to get quotes from two of the victims:

"As soon as I stepped into the situation my life and the life of those around me felt as if it was being threatened. I did not know I was being hit with a gun until my friend yelled that it was indeed a weapon,” the first victim said. Then, the second victim went to help the first victim and was pistol whipped by the female assaulter repeatedly to the back of his head.

I asked her to stop, and she responded by threatening my life saying that she would shoot me so I out my hands up,” the second victim said. The third and final victim was on his way outside the door and was immediately pistol-whipped to the cheek. Following the third assault, the victims ran away in their vehicle. The victims did not know or have any connection to the assailants. The Department of Public Safety and the City of Syracuse police came to the crime scene after the event.

This statement reveals that DPS did not reveal the entire story and perhaps downplayed the severity of the incident. DPS released two emails, the second sent with the intent to alert the Syracuse campus of the additional information on the incident. Why were details left out? According to DPS, the assaulters have not been identified.

One of the bigger questions pulled from this incident is: Was this a race-driven assault?. The evidence we have may suggest that it was… The four assaulters were noted as caucasian by our eye witness, and one of the assaulters allegedly called the victims “n******”. The three victims were black.

A group of students released this statement in response to the breaking news: 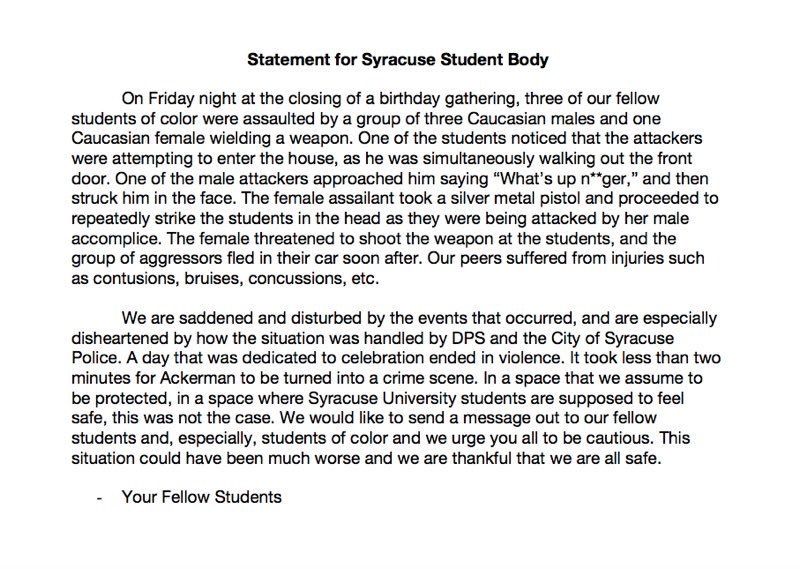 The Tab Syracuse will continue to update viewers as the investigation develops.

If you have any additional information, contact us at [email protected] or on social media @thetabsyracuse