Due to construction delays, The Marshall will not be ready for move in, Fall 2018

On July 21, we discovered that 82 tenants at The Marshall would have a delayed move-in due to construction delays. On August 10, we discovered that the number had increased by 205, leaving a total of 287 students without housing for the first month of the academic year.

The Marshall is a new student apartment housing complex on Marshall Street. With its new construction came the destruction of popular Cuse hotspots such as Funkin' Waffles, Chuck's, and AppaTHAIzing.

The Marshall has faced some back luck recently, do you think it's Chuck's Revenge? [Response via Instagram from an Anonymous User]

Many of our viewers shared their opinions anonymously through Instagram, expressing concern, worry, and anger about The Marshall's delays. [See Section]

We have also received further information from The Marshall. [See Section] 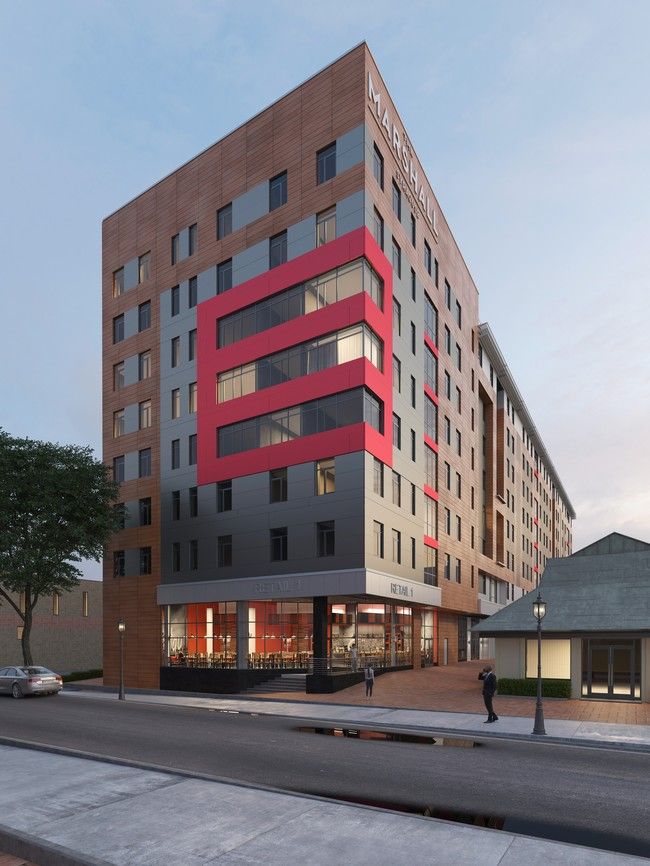 Our first tip came from an anonymous user, who shared key information for our investigation.

Anonymous User 1: "It's an awful situation. I'm one of the students that has to live at the Crowne Plaza. They [The Marshall] are giving us a $200 Uber gift card and $30 a week for food. They expect us to pay a full month's rent as well even though we aren't gonna be moving into the Marshall till mid September. "

He shared with us a copy of the most recent email he has received: 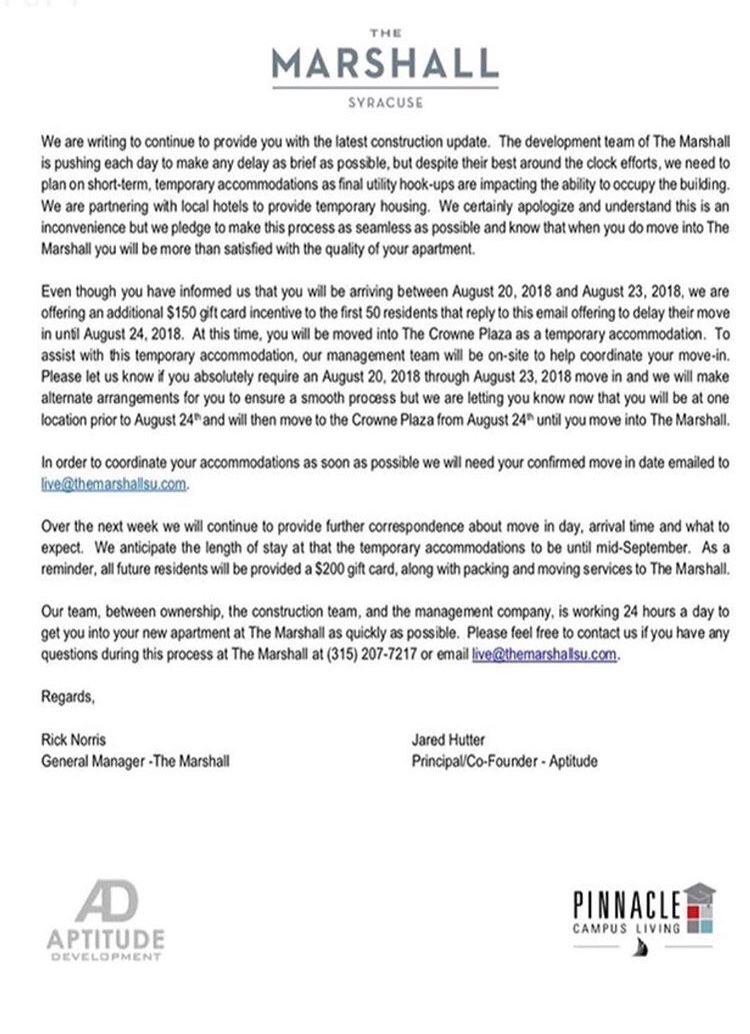 In response, another anonymous user agreed and explained further. 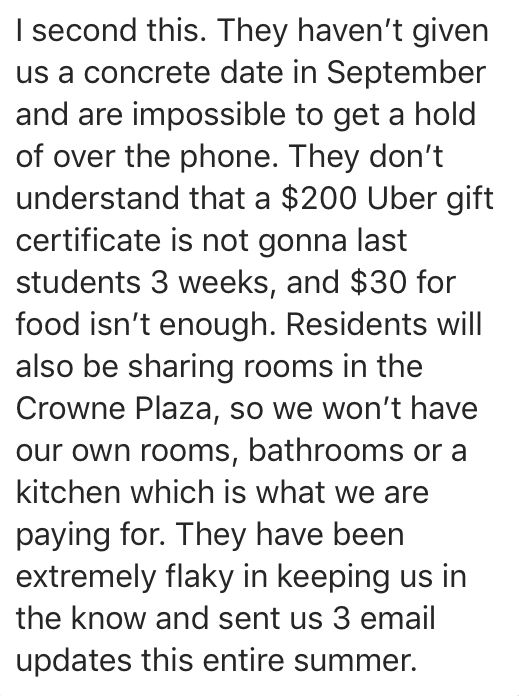 A third anonymous user chimed in as well, arguing that $30 a week would not be enough.

Anonymous User 3: As a future resident of the Marshall we should not be paying rent while we are not in the building. It is not our fault the building is not completed in time. My $1,200 a month rent could be used to buy take out every night since we won't have a kitchen (Since $30 a week for food is a joke). Why am I paying when the service isn't provided?

One student shared his opinion on the situation hoping to show a different, positive side to The Marshall move-in delay.

Anonymous User 4: Honestly I could see the project being done by the middle of September. Even though it might not look from the outside do you know what has been completed internally? This is actually quite common for college housing projects simply because the deadlines are so rushed for the construction workers and they don't have enough people to account for the demand. Look up Maplewood housing in Ithaca. There are supposed to be over 100 students without housing at the beginning of the semester and the projected finish of the job isn't until the middle of October. So in all reality as much as it sucks it could be worse. 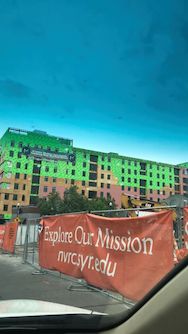 A photo from August 13, 2018, showing The Marshall still lacking windows via an anonymous user.

Things we gathered from our viewers about The Marshall:

2. The Marshall's new move in date is anticipated to be mid September. Until then, the tenants will live in the housing arranged for them by The Marshall.

3. The Marshall is compensating with $200 Uber gift cards and $30 per week for food expenses.

We reached out to The Marshall and received a formal response, outlining all of the future plans and provisions for the displaced students.

Here is the Press release we received: 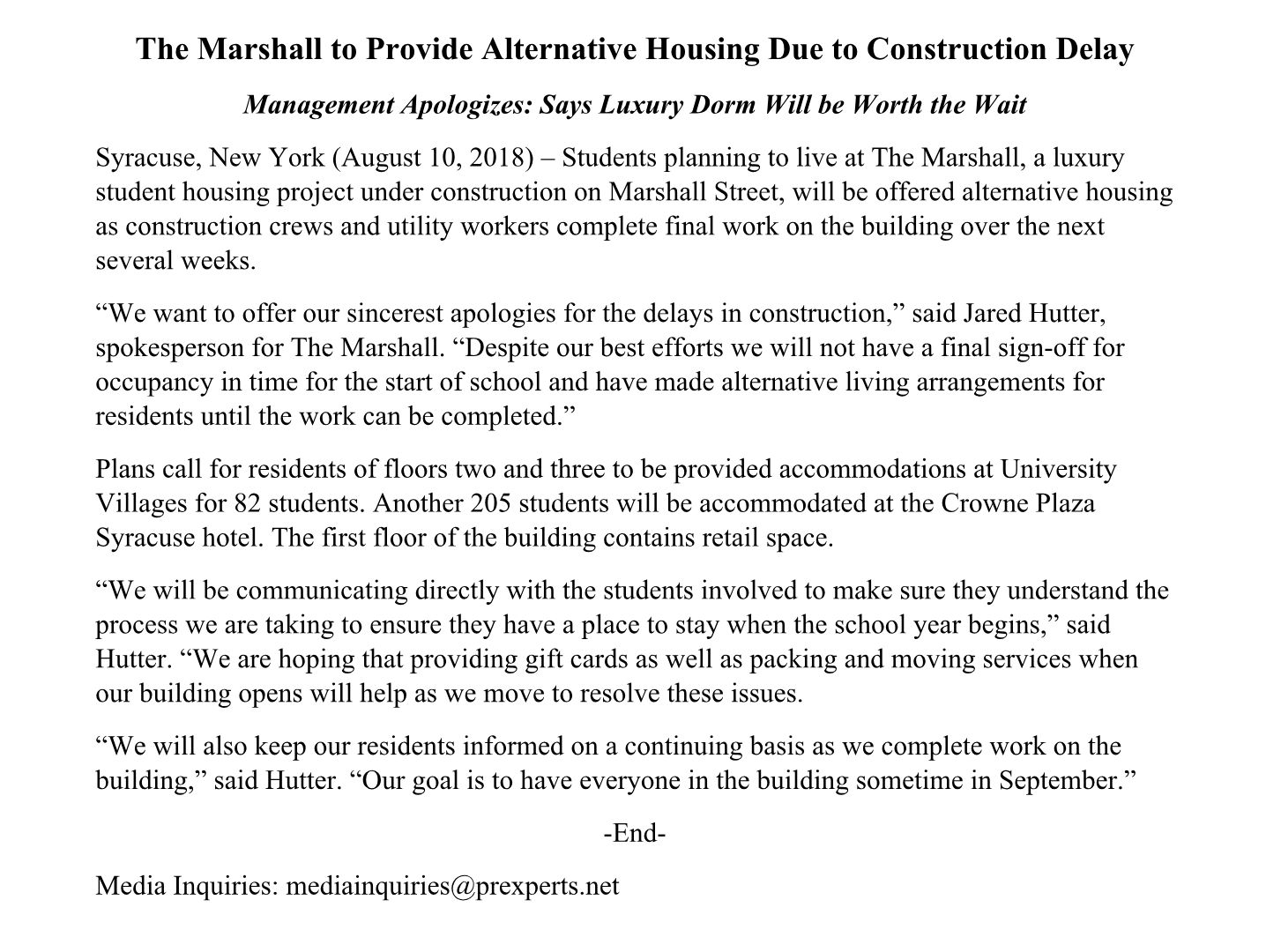 Press Release via The Marshall

In the email we received, David Margulies, a The Marshall spokesperson, explained the following:

For students who are current on their rent, we have arranged for rooms at the Crowne Plaza hotel. Accommodations at the Crowne Plaza will include linens, access to the hotel gym, a shuttle to and from campus, internet, cable TV, and laundry services. A representative from our management company will be on site to assist students during this process and answer any of your questions.

Some students have indicated they wish to make their own alternative living arrangements and we can certainly accommodate those requests. In these cases, they will receive a prorated rent credit from their move in date at their own alternative housing to the date they can move into The Marshall.

Residents that stay at the Crowne Plaza will receive $200 gift card, $50/week meal credit, laundry service and shuttle service from Hotel to Campus.

Those not staying at the hotel will not receive a $200 gift card, $50/week meal credit or laundry service. In exchange they receive a rent credit.

This is all that was provided directly from The Marshall's spokesperson.

An anonymous student has sent us a portion of the most recent email to The Marshall Tenants. The Marshall has stated that the anticipated move-in day will be "no later than September 20". 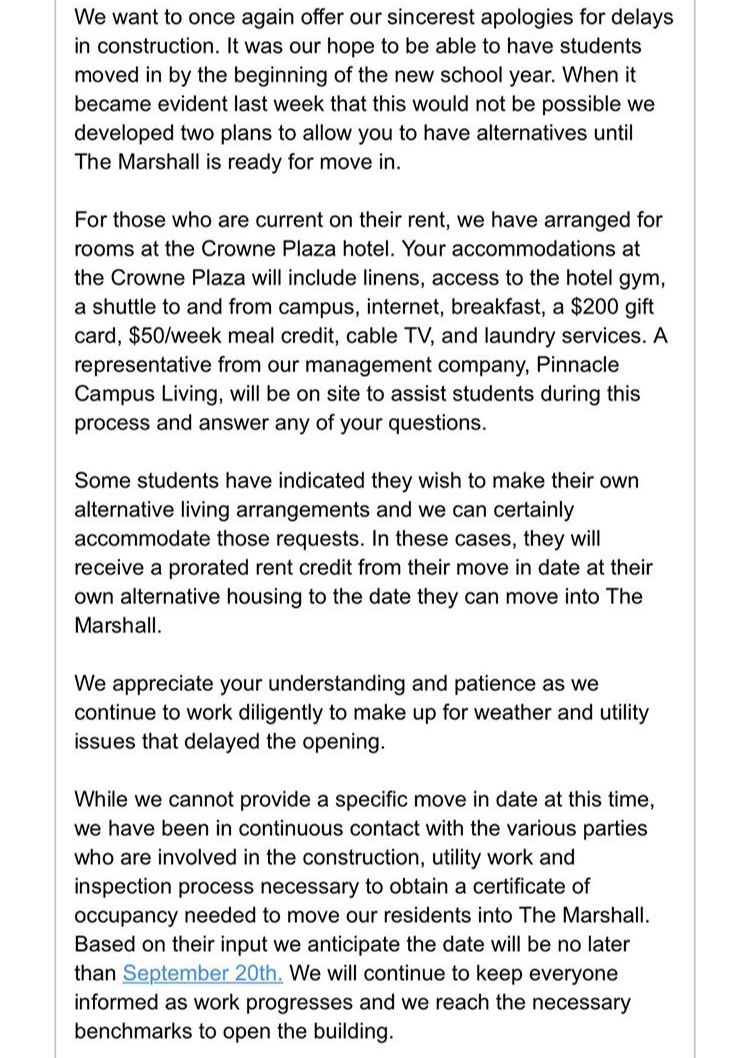