On 14 March, The Rachel Maddow Show said it had obtained Trump’s 2005 tax return information. This highly sought after information has been a topic of interest prior to Trump’s election in November. How did the show get this information? From a former Syracuse University lecturer and renowned investigative journalist, that’s how.

David Cay Johnston was a distinguished visiting lecturer at the Syracuse University College of Law and the Whitman School of Management from 2008 until 2016. He “taught the tax, property, and regulatory law of the ancient world.” He’s had a long-lasting interest in Trump’s financial games and has been writing about him since the 1980s.

Though there has been an uproar from conservatives, the White House confirmed that the 2005 tax return is legitimate and Trump indeed wrote off $105 million in losses that year. Trump has not responded well to being exposed by an SU professor. 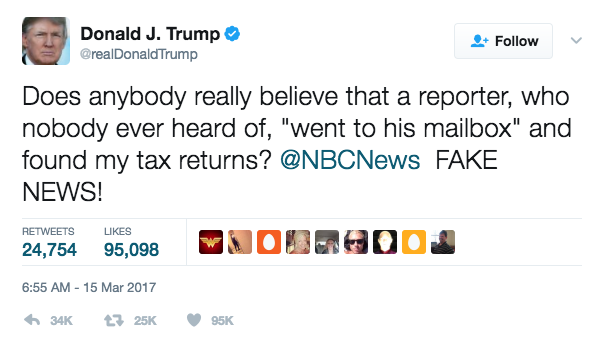 Really, Trump? A reporter nobody has ever heard of? Fake news? Looks like someone can’t handle being called out.

Syracuse really didn’t need more confirmation that it’s a great school with great people who will expose anyone, but here we are.