Just because the semester is over, does not mean your closet full of Syracuse tailgate outfits has to remain stagnant

Syracuse University students know very well that when there’s a football or basketball game, there is a tailgate. And when there is a tailgate, there is some great fashion. Before a tailgate back in November, Marielle Fisher requested rising junior Hannah Winpenny’s fashion help because she has always been known as the girl with the sewing machine. The result? Take a look for yourself. 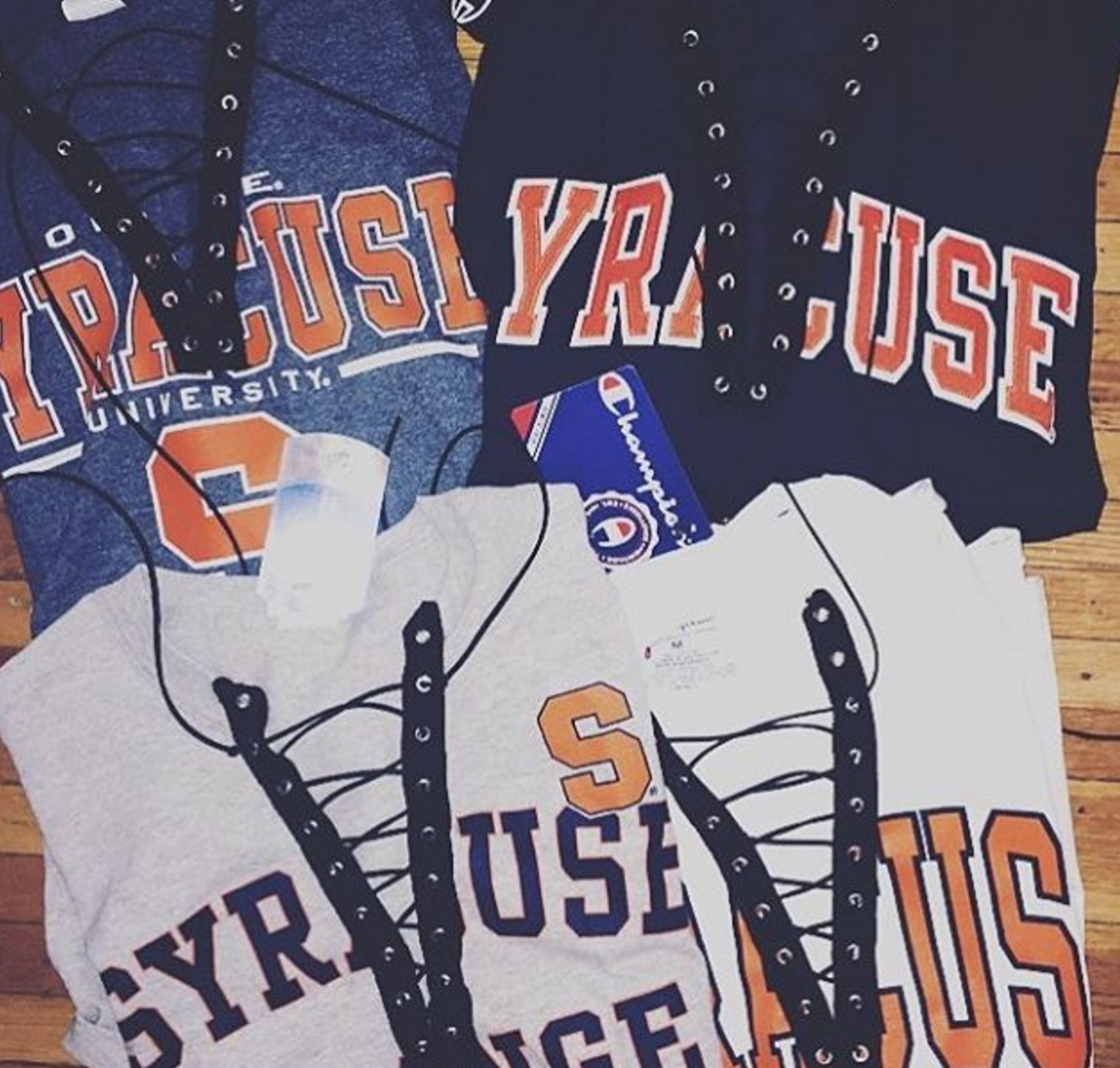 “What makes my shirts different than others found in a store is that I can customize any shirt you already own because I can sew the lacing design onto any shirt,” Hannah said.

After Hannah put the final touches on her first shirt, Marielle wore it around the Alpha Phi house. As an immediate result, four other friends in the house asked Hannah to make them shirts as well. Because Hannah’s friends wore her original designs to the tailgate, they got more attention which turned into more commissions.

“A lot of girls in my house helped me get it started. After that tailgate I probably made 15 within a week because they caught on so fast,” she said. 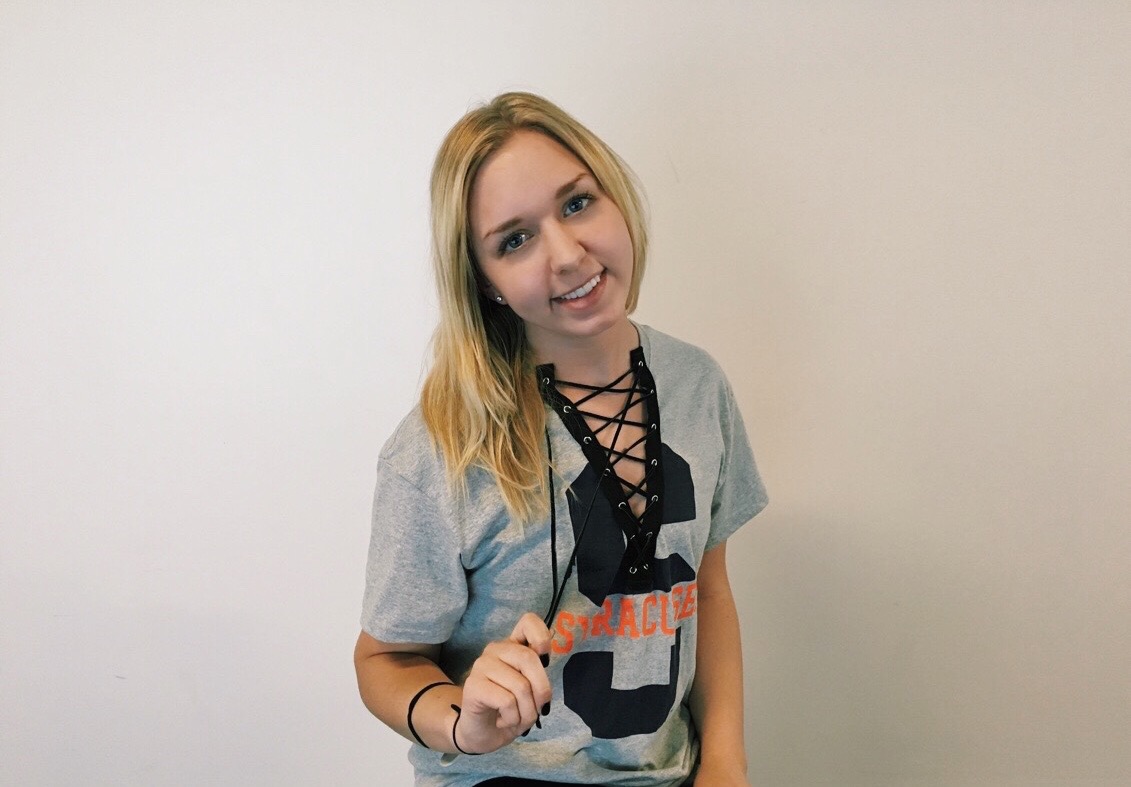 With the sewing skills she learned from her mom and high school classes, Hannah took it upon herself to make original college budget friendly lace-up shirts. If someone drops off her own shirt, it will cost $10 to lace up a t-shirt or long-sleeve and $15 to lace up a crewneck sweatshirt or hoodie. Because of the increased interest in her shirts, Hannah decided to name her custom shirts “Tied Up Tees.” Her designs are featured under the Instagram handle TiedUpTees and can be commissioned if an email is sent to [email protected].

“It took a very long time and a lot of Instagram handle fails to come up with ‘Tied Up Tees’. The name kinda evolved into that. At first the name was something like ‘Laced Up’ and someone in the house said it sounded sexual so I was like OK, I guess I have to change it. I tried a bunch of names and ‘Tied Up Tees’ seemed to be the best,” she said. 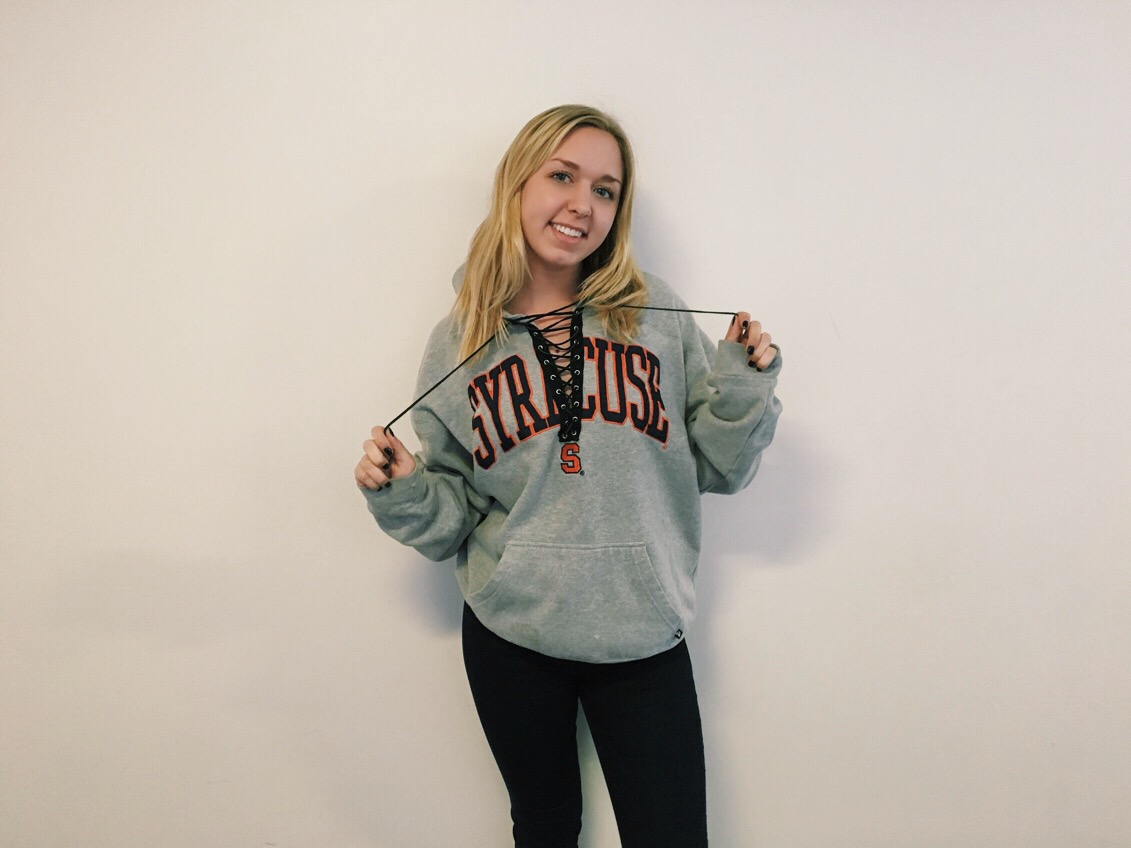 As a retail and marketing major and photography minor, Hannah finds that her classes help drive the success of Tied Up Tees. She has learned many skills from her retail classes, Excel class and photography classes such as how to market, how to organize everything through Excel and how to compose photos for Instagram. 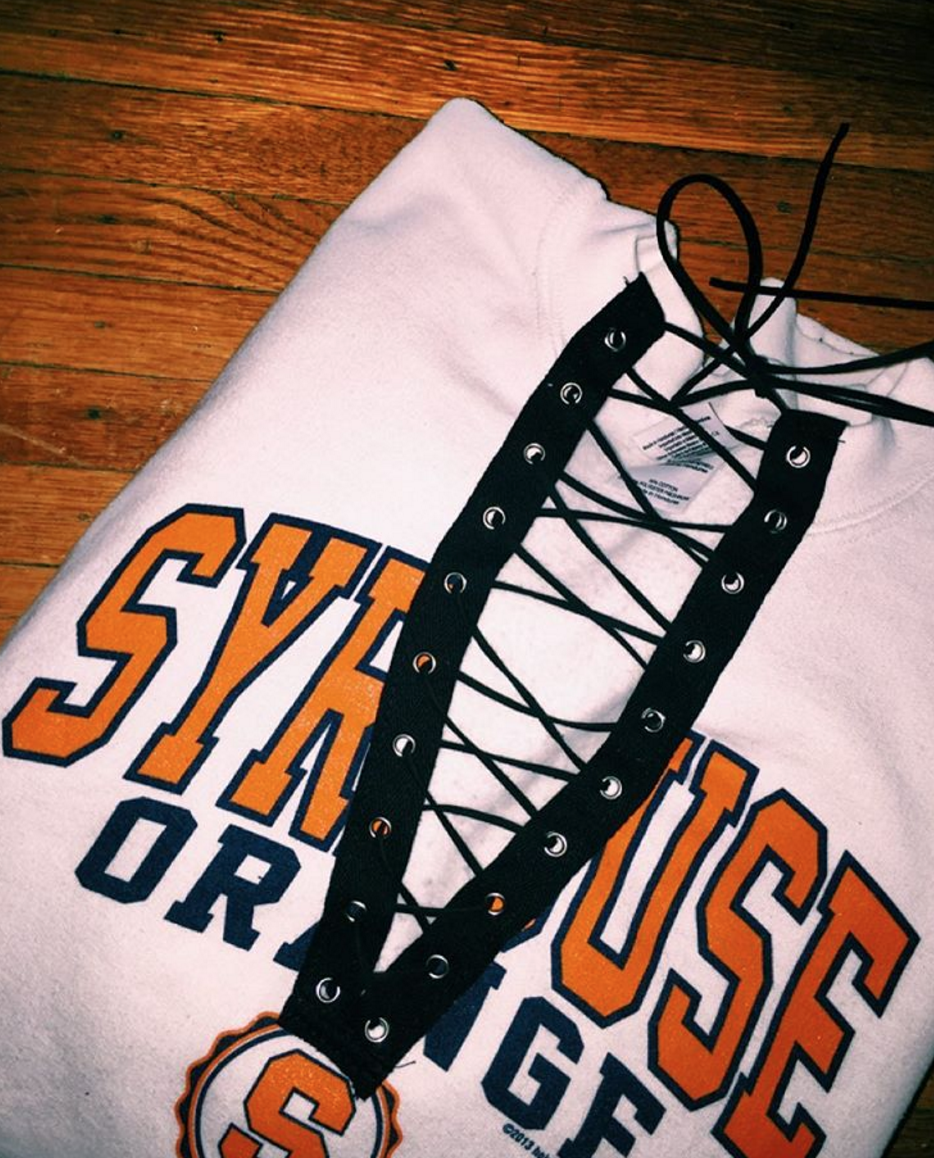 Hannah’s designs are inspired by expensive lace-up shirts that do not fit the college budget.

“I saw the lace-up shirts everywhere: on the streets, in stores, online. I wanted one of my own. And as a college student on a budget, I’m not going to pay $130 for a graphic tee with lacing. Absolutely not. And not only that, I wanted to put the lace-up design on any shirt,” she said. 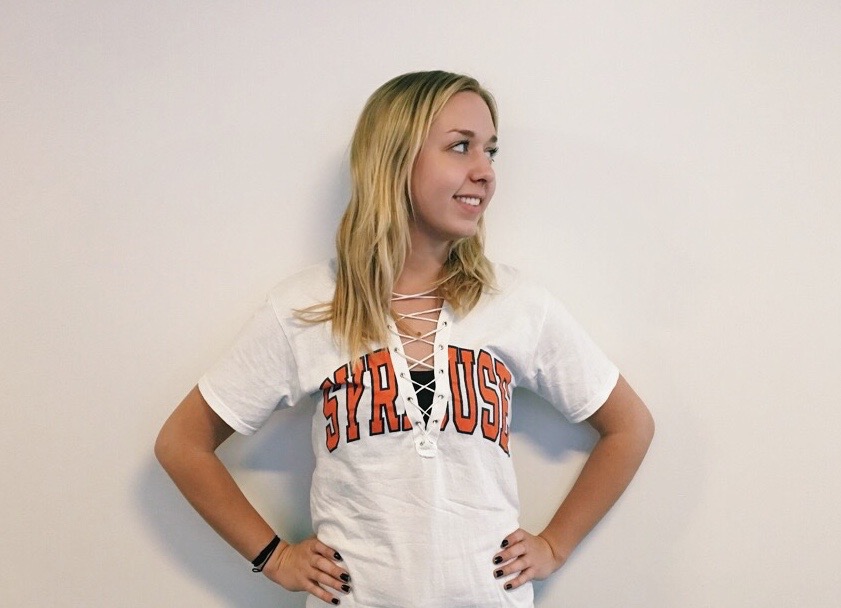 “This one is just mine. It’s all white. No one has an all white one yet. It’s actually the one that I wore to the final four tailgate”

This 20-year-old New Hampshire native who mainly lives in Boston now is approached about her shirts, especially during tailgates.

“A lot of them come up to me during tailgates when they are kind of drunk and are like ‘I want one of these shirts so badly!’’ Hannah said. 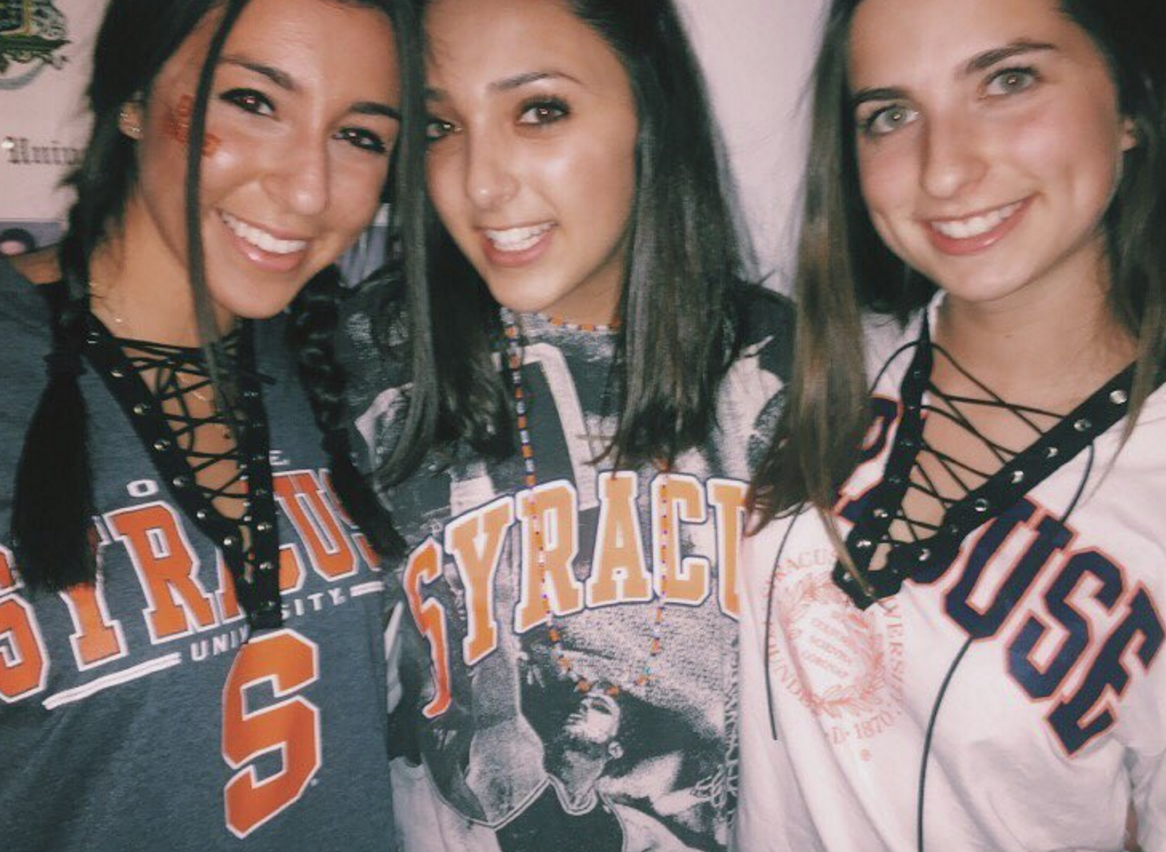 Her shirts gained so much popularity by the final four tailgate in April, that she laced up 52 shirts in 24 hours. She started sewing the Thursday before the Saturday tailgate and finished on Friday. She always sews at her desk while listening to The Office play in the background. By the end, there are needles on the ground and labeled bags everywhere.

“My room was a mess. I felt so bad for my roommate. It was absolutely crazy though. I had a friend visiting and she watched me sew for actually 10 hours. It’s a lot of work,” Hannah said.

Although it took much time and effort to create the shirts, the feeling of seeing many people wearing her designs is priceless for Hannah.

“I love the feeling when girls wear it out and take pictures. My favorite feeling is when I make someone something really cool and people start commenting ‘Oh my god that’s so cool!’, ‘How’d you do that?’, ‘I want one!’ It just makes me feel really good about myself and my creative process. I love doing it so much that I would honestly do it for free if I could get the supplies for free and if my time was free,” she said. 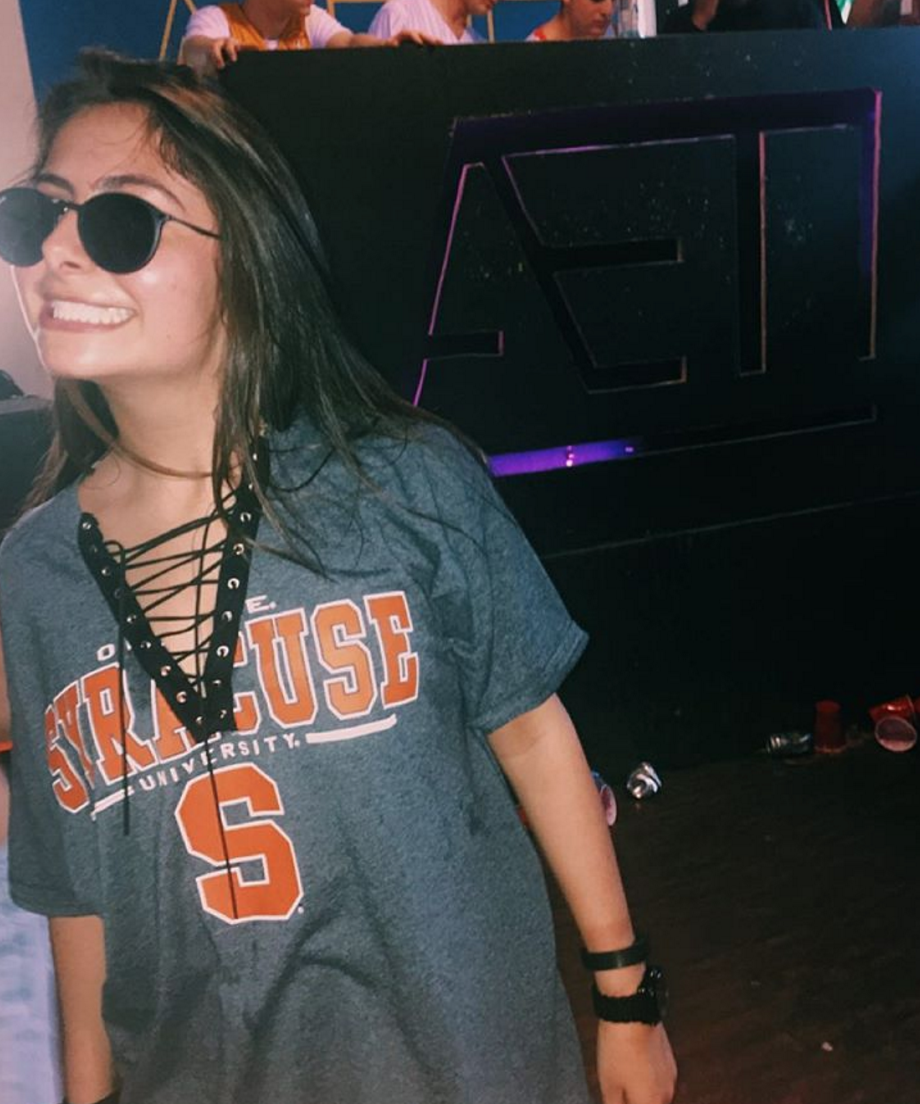 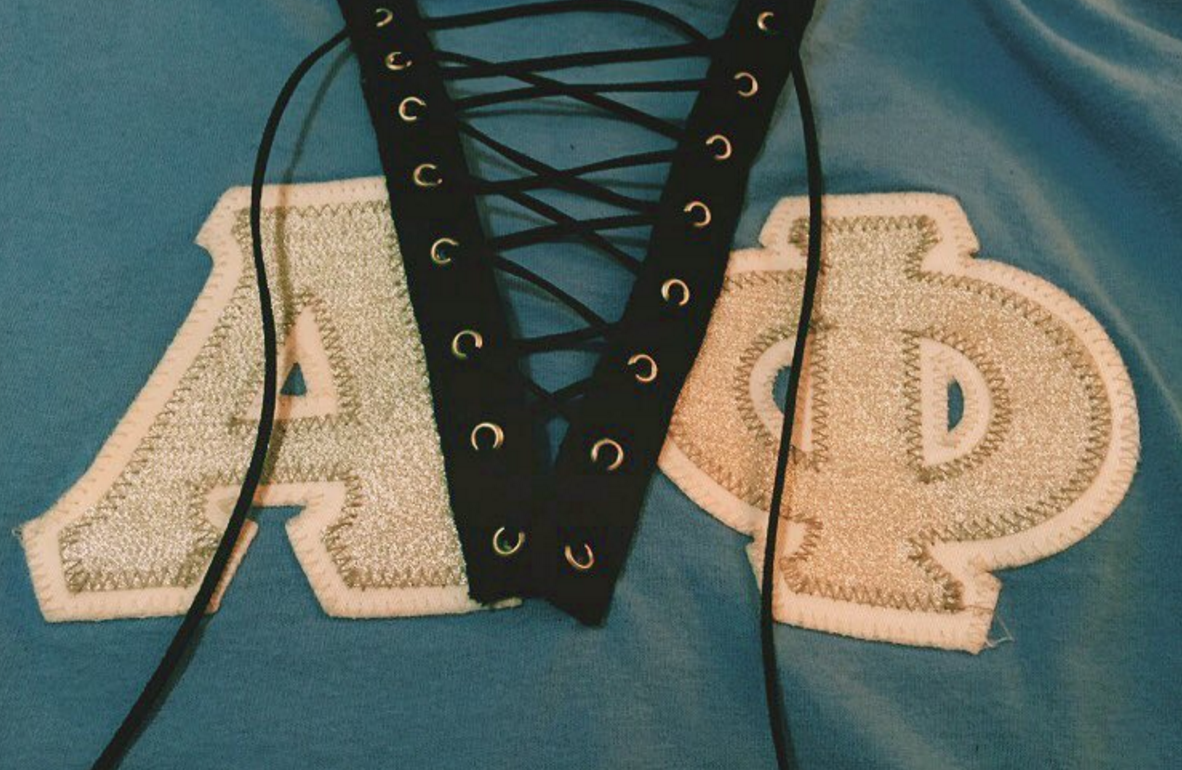 Before Hannah returns to Syracuse in the fall, she plans on finishing her website and making more shirts. She also looks forward to creating a logo on Photoshop.

“I haven’t put up a website yet, I am working on it. Since the school year is almost over, I am going to make it a lot bigger next year, especially by reaching out to the incoming freshmen,” Hannah said.

Because she loves sewing, Hannah is continuing to take orders over the summer.

“I love sewing. It’s like a hobby. This is fun for me when I do this. It’s awesome. It’s not really about me making money. Like yeah it’s awesome that I get to make money doing something that I love but it’s more about me making cool stuff for girls,” Hannah said.