This SU senior has her own custom-made jewelry business

What was once her hobby is now her business 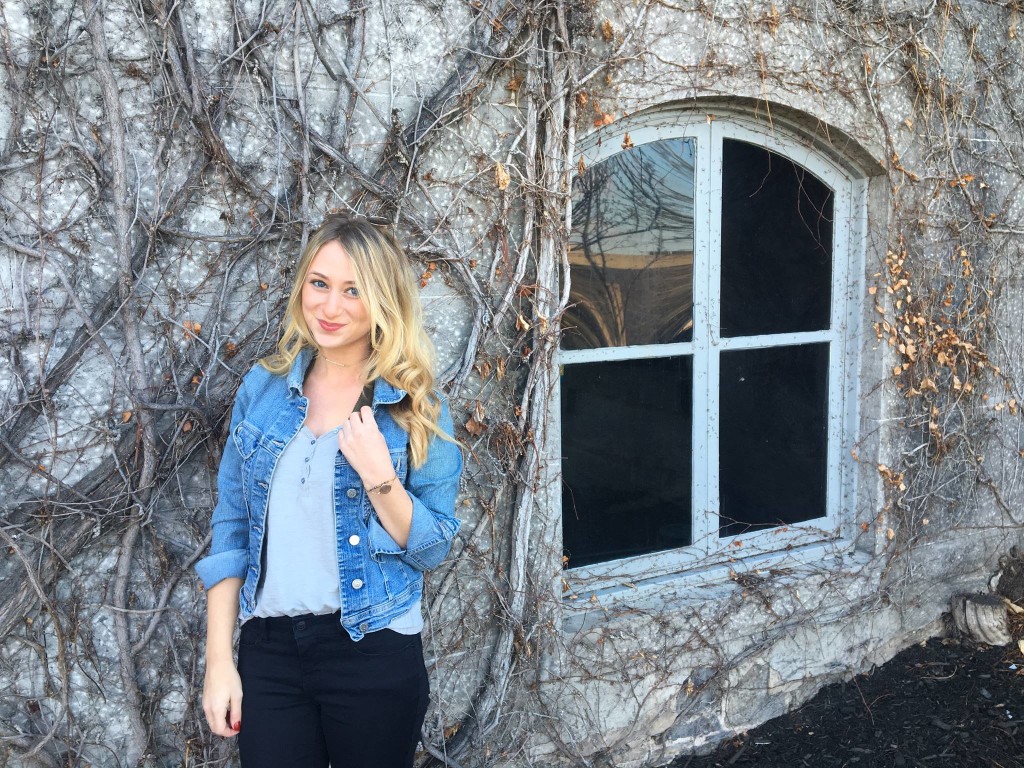 During summer break after her sophomore year in college, Jessie Klein, who is currently a Syracuse University senior from Los Angeles, was invited to her best friend’s house to help her mom string beads. This was Jessie’s first time ever making jewelry, so her best friend’s mom taught her jewelry making techniques as well as how to use a few jewelry making tools. Little did she know at the time, that moment would have a huge impact on where she is today.

Later that summer, Jessie went to Israel on a Birthright trip through SU. As she walked in and out of markets that sold jewelry, she browsed the aisles, but nothing struck her eye. Since most of those markets design and create their jewelry in front of the customer, Jessie decided to ask if she could custom make a piece of jewelry for herself.

“The guy actually let me come in and make a necklace. So I picked out the beads that I wanted and the chain, and he let me put it all together. He said no one has ever done that before, but I am so glad I did it because love my necklace and I still wear it,” Jessie said. 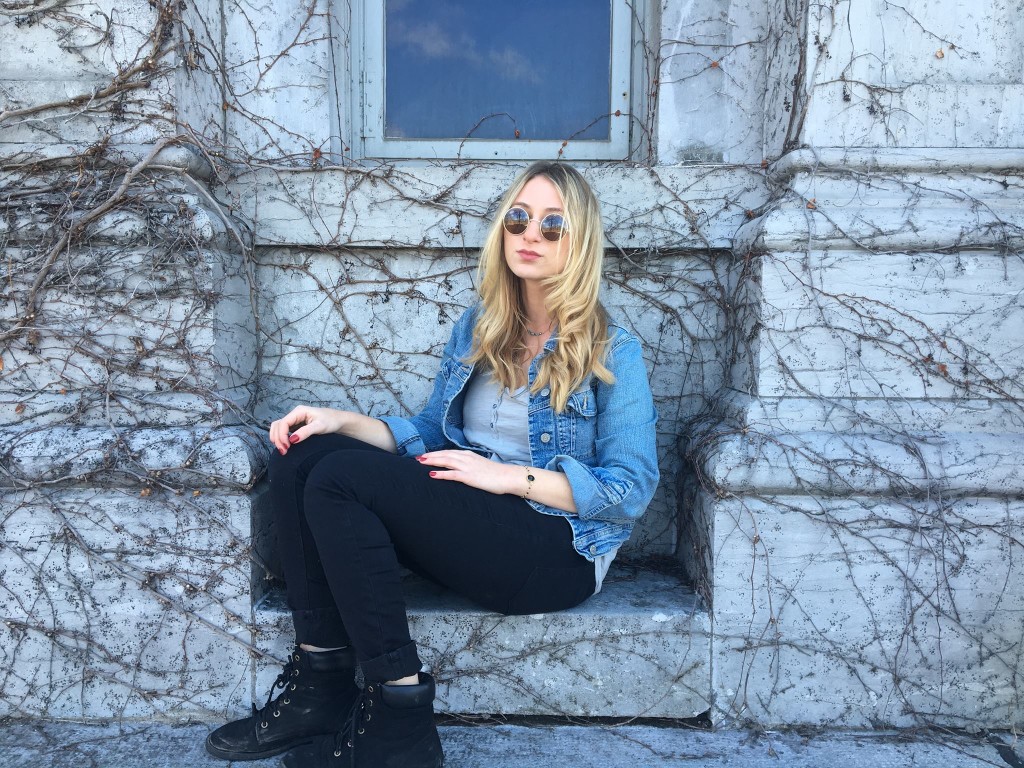 “I really wanted the choker necklaces that everyone was getting, those black ones, but I felt I couldn’t pull it off. I wanted something a little more girly. The ones I found were not really what I wanted,” she said.

As a result, Jessie took it upon herself to create a custom made piece of jewelry. She started messing around and created her own version of a chocker necklace. Jessie said she wore it the next time she went to Chuck’s, and people went up to her and asked where she got her choker. After that night, what was once a personal hobby turned into a business since she started to create and sell jewelry for other people. Because of the increased interest in her jewelry, Jessie set up a Facebook page, an Etsy account and a Wix website under the domain “simplEjess.” 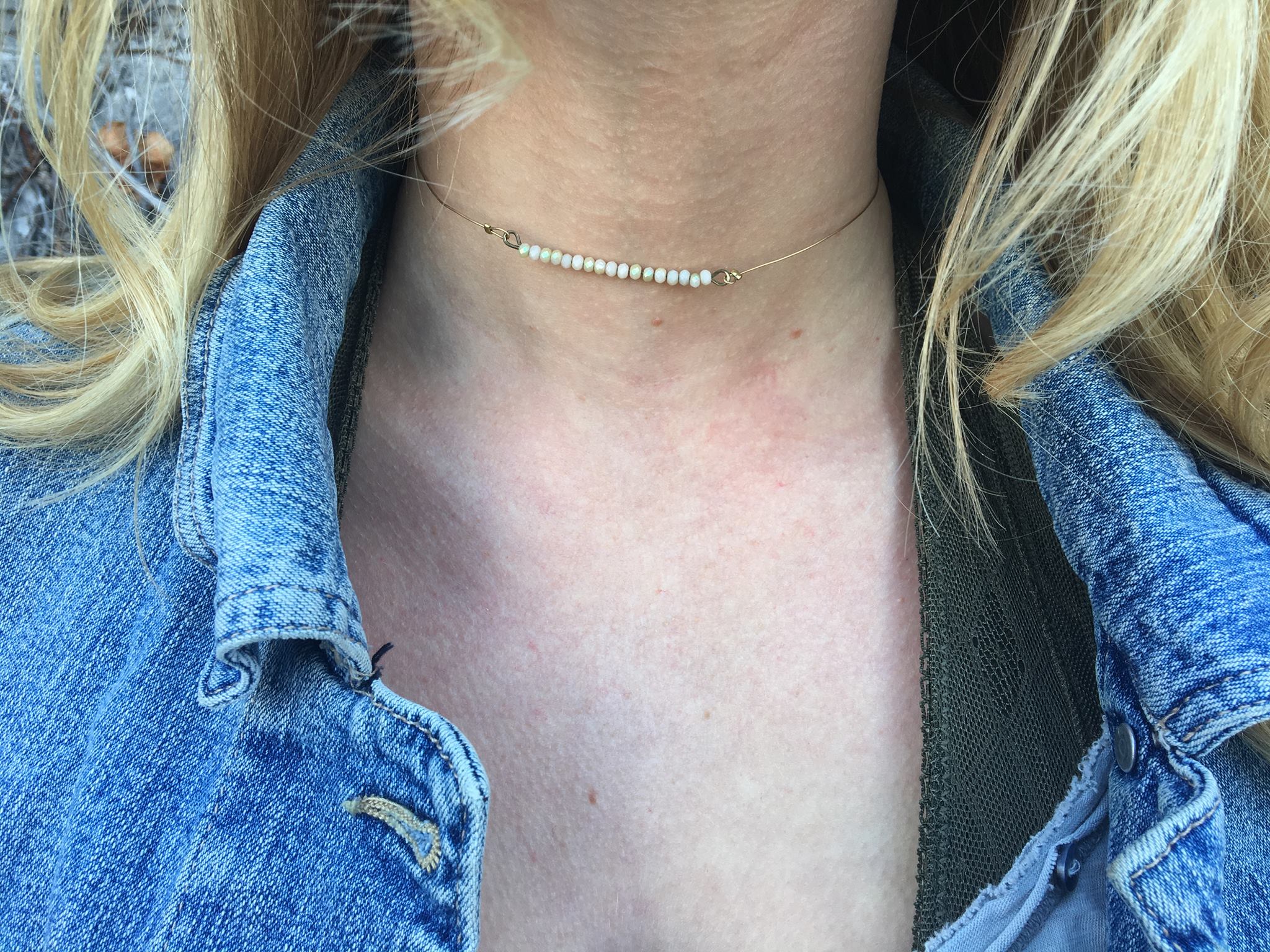 One of the versions Jessie designed and made. She has done several custom pieces in that style. This is Jessie’s gold wire choker with white beads

“Actually, just the other day a girl came up and asked for the choker I was wearing, but she wanted it with chain and turquoise beads. She asked if there was any way I could do that and I was like yeah I can! So I literally went to the store and I am going to drop it off to her later today,” she said on the day of the interview.

The 21-year-old was also approached during the Final Four tailgate at Caste Court. Because her jewelry is different, people notice it. Her student customers act as models since they show off her jewelry.

“I wore my choker out to the tailgate and I had at least 10 to 15 people compliment me. They were either like ‘oh my God I heard you sell those! We just saw two other girls wearing them and they pointed us in your direction,’” Jessie said. 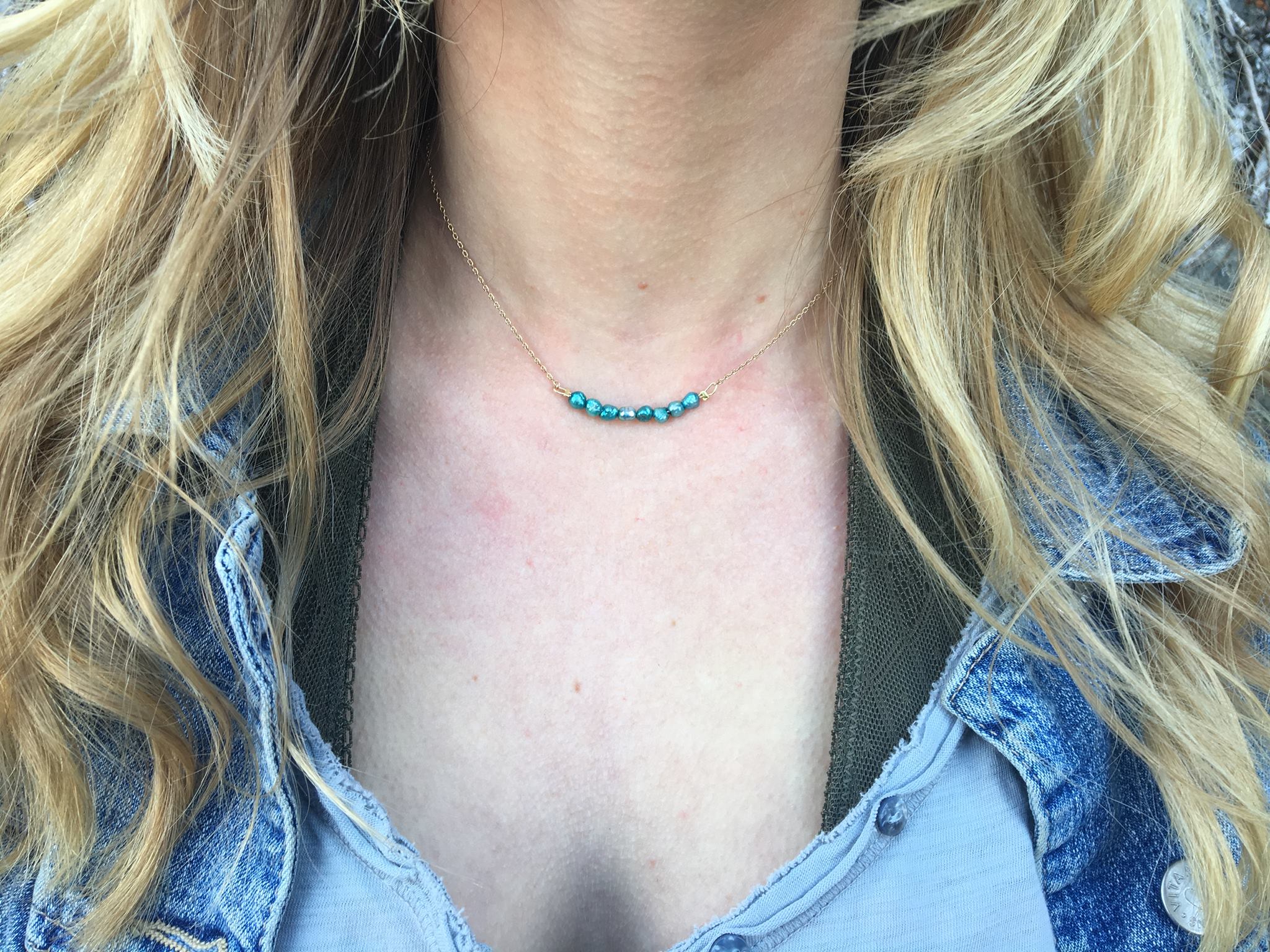 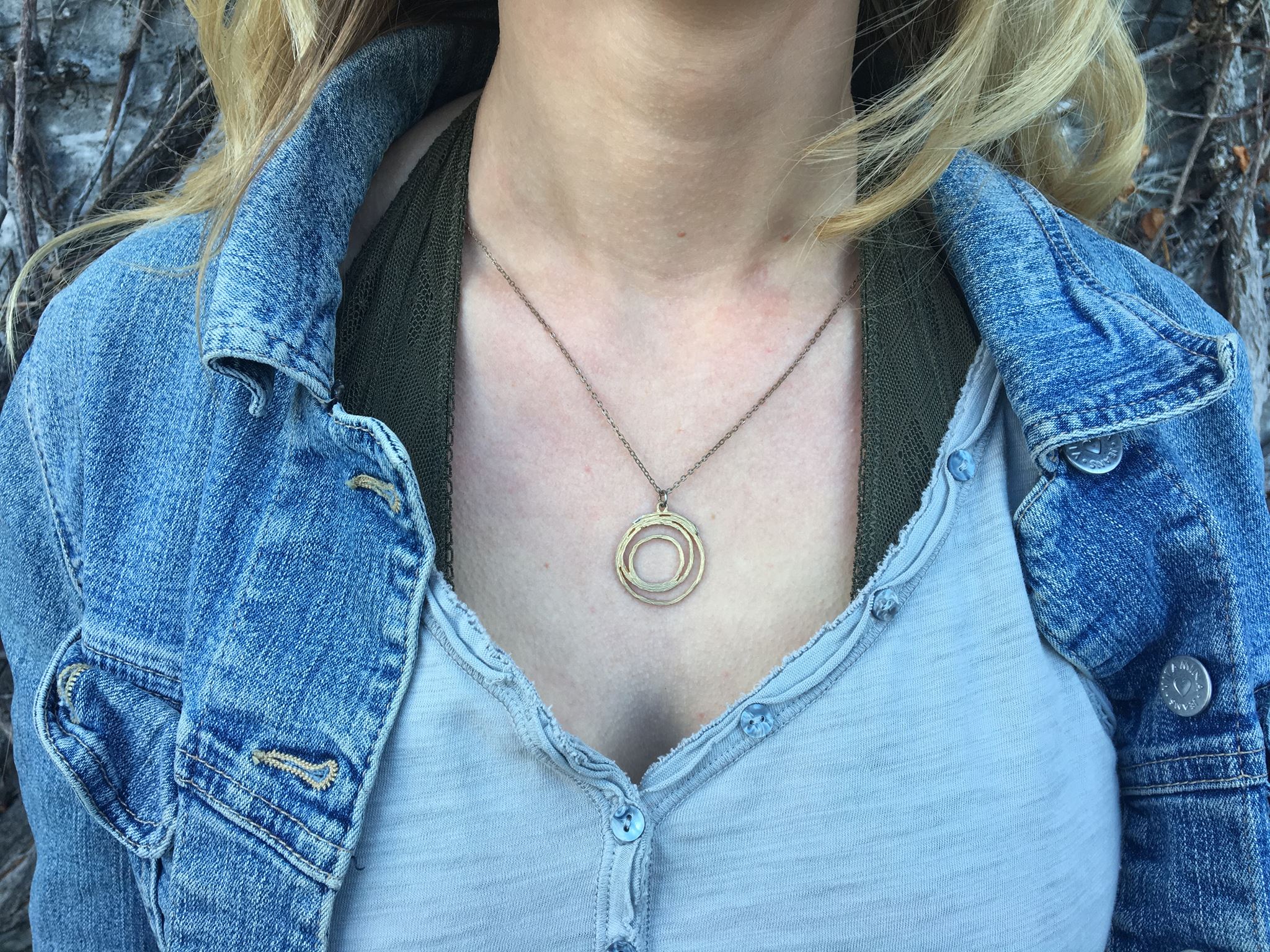 As a former member of Phi Sigma Sigma, Jessie found that her first clients were from her sorority because they always saw her wear original pieces.

“When I made an Etsy, I shared it with the Phi Sig group and I got more sales from that. Then it kind of sprinkled into people seeing it in class and so I made a website for my brand on Wix. But most of my stuff is not really though Etsy. I make most of my sales through word-of-mouth because people on campus come up to me and people Facebook message me ‘Hey I saw this piece, can you make it,’” Jessie said.

Since Jessie enjoys the process of making jewelry, she did not hesitate to expand her business when people asked for customized pieces. 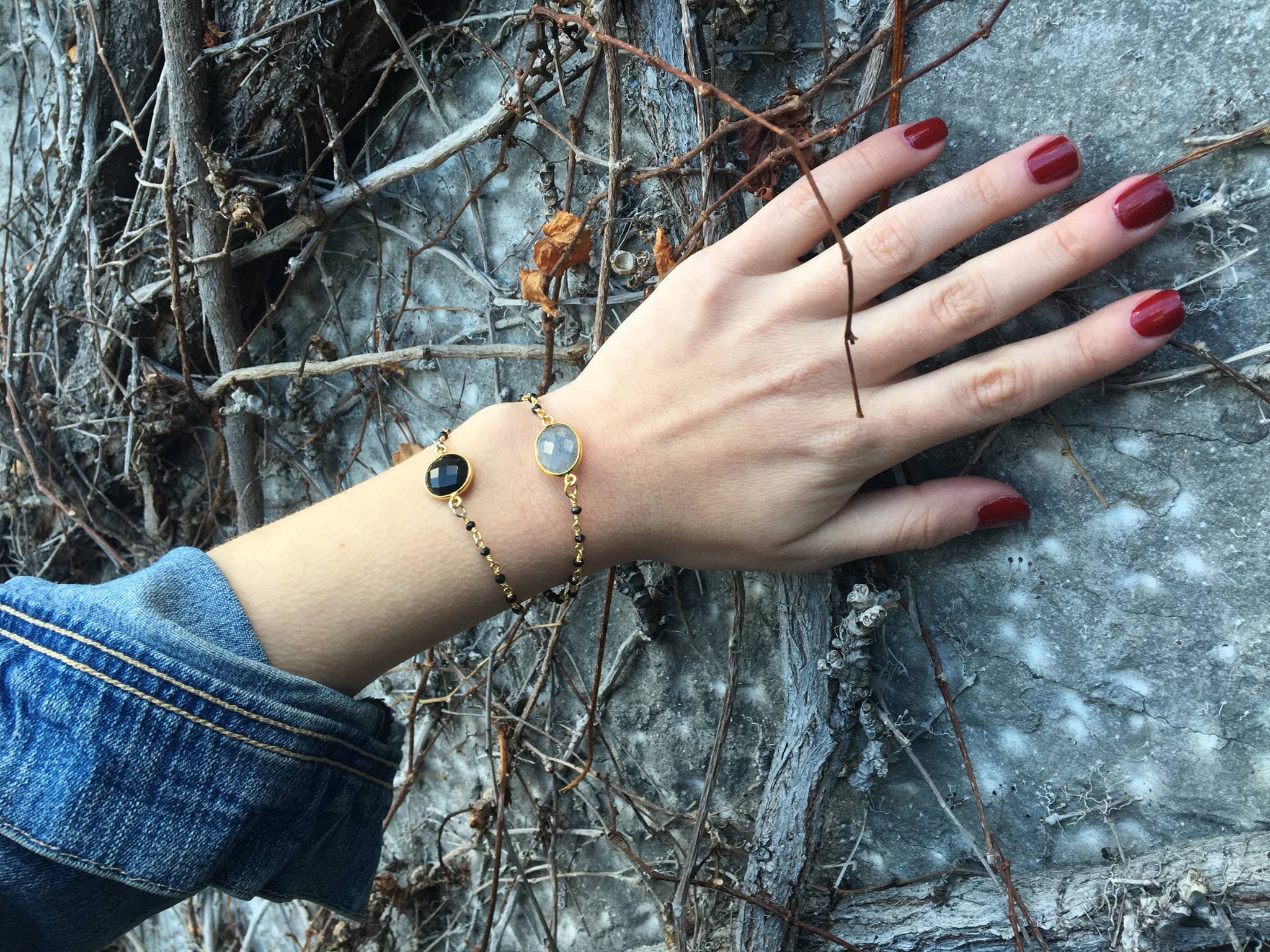 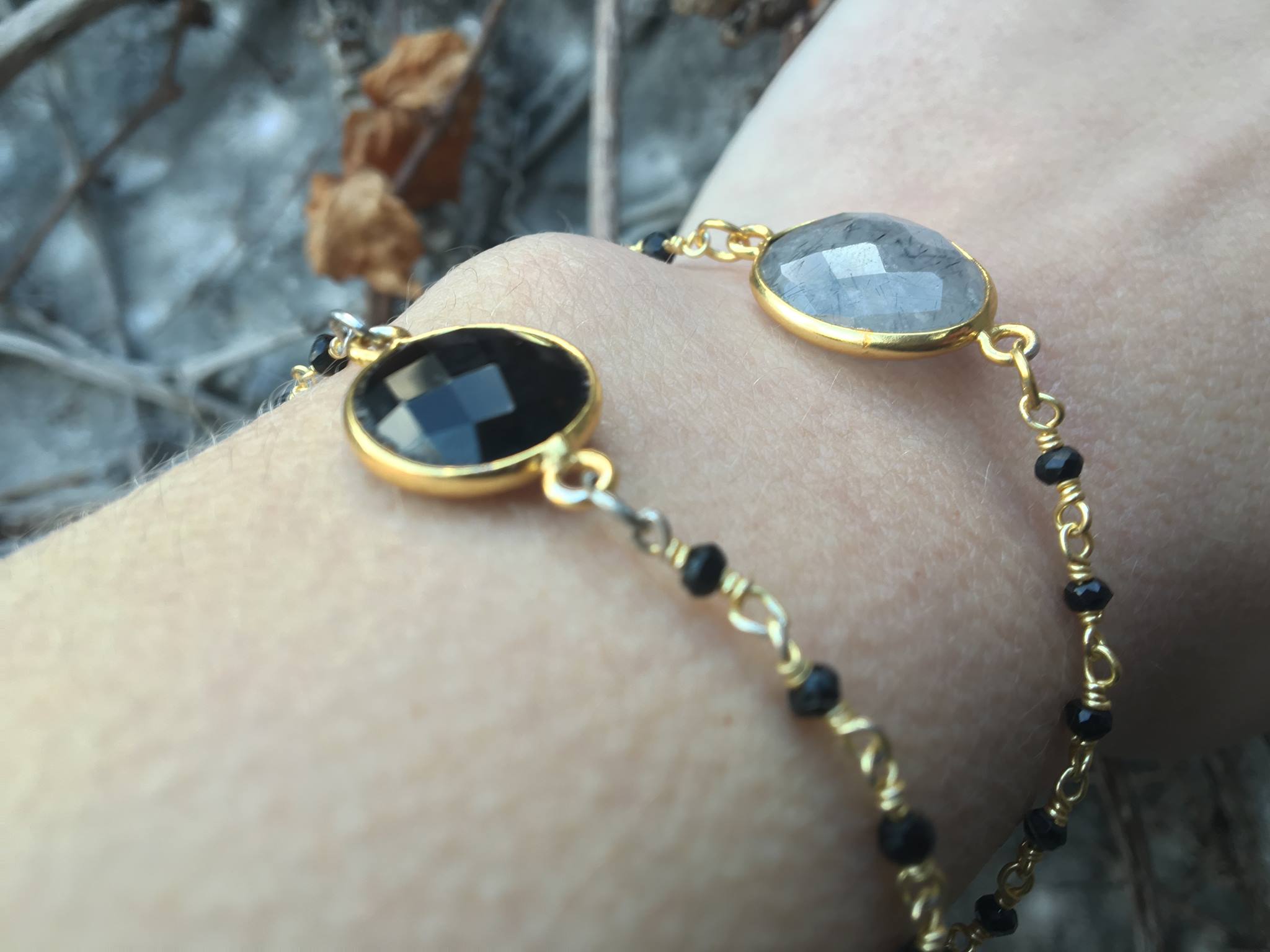 “Normally I work in my dorm room. My dorm room is a lot bigger than normal just because I’m an RA, which means resident advisor. I’m in Ernie and I have a floor length window so a lot of light comes in which is perfect for my jewelry making. And I just sit on the ground, put on Friends and make jewelry,” Jessie said.

What sets Jessie’s jewelry a part from popular jewelry brands is that all of her jewelry is handmade and customizable. 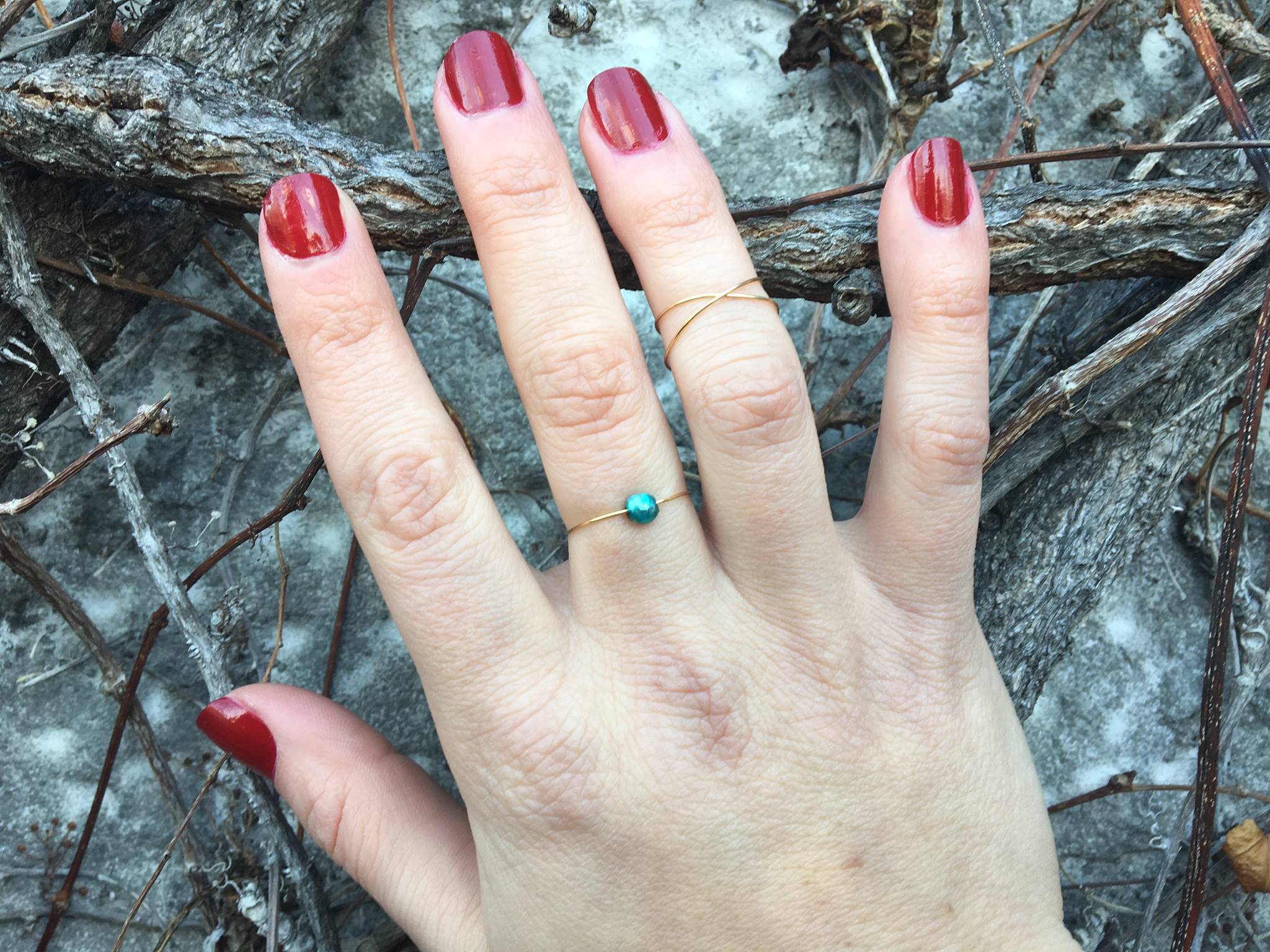 “All of my jewelry is handmade which I think makes it really special because none are going to be exactly the same. I think it’s cool because they can put their own input into the design and I can make things custom for them which you can’t get walking into a jewelry store,” she said.

What used to be an enjoyable hobby for Jessie has transformed into an actual brand naturally. She started making jewelry for herself, not others, solely because she could not find pieces she wanted to wear. Now she makes jewelry for others because of the interest that has sparked by wearing original pieces out and by word-of-mouth. 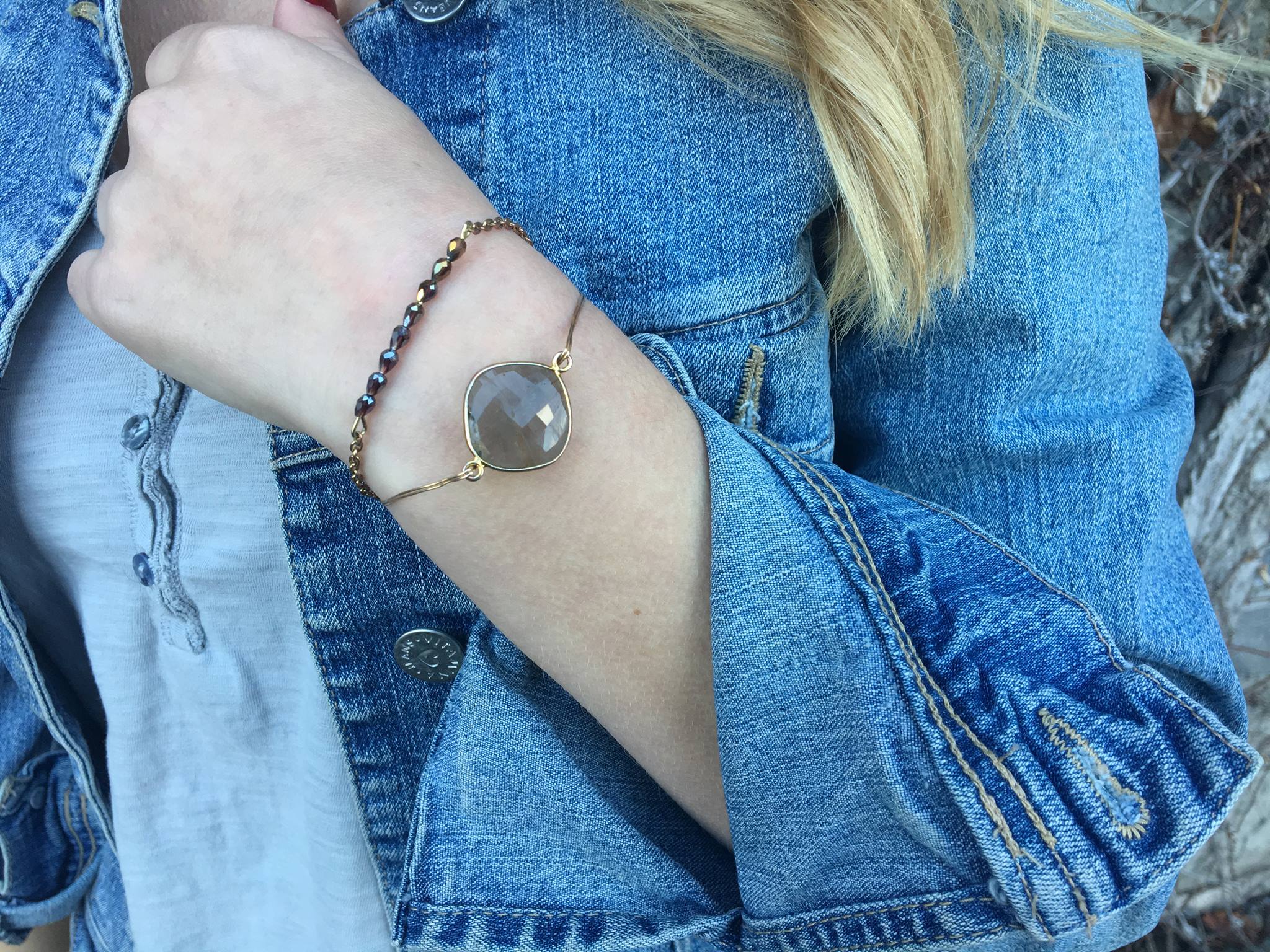 “It’s really exciting, it’s been almost overwhelming but in a really good way. I didn’t expect it to go this far since I started making jewelry for fun and it spiraled into this really cool, beautiful thing and it makes me really happy when people ask where I get my jewelry from because they think it’s nice enough to be seen in a store,” she said.

Jessie is inspired by her surroundings. This summer, she is traveling to Budapest, Vienna, Italy, Greece and Milan. She is excited to find new inspiration, especially in Milan.

“The main fashion plan is going to be in Milan becauseit is the fashion capital. I am going to go to museums and hopefully find some cool inspiration for another piece,” Jessie said.

After graduating college, Jessie starts her job at Ross Stores, Inc., which is an American chain of off-price department stores. She has interned with them in New York City for the past two summers and got the opportunity through the Whitman School of Management at SU. Last August, she got an offer to work there full-time after college. Although she is excited for the next step in her career, she still wants to make jewelry.

“I am hoping that since I am working in the fashion industry after I graduate and will be in New York City, more resources available to me. So hopefully something more with my jewelry can happen, but my main focus right now is definitely on my career,” Jessie said. 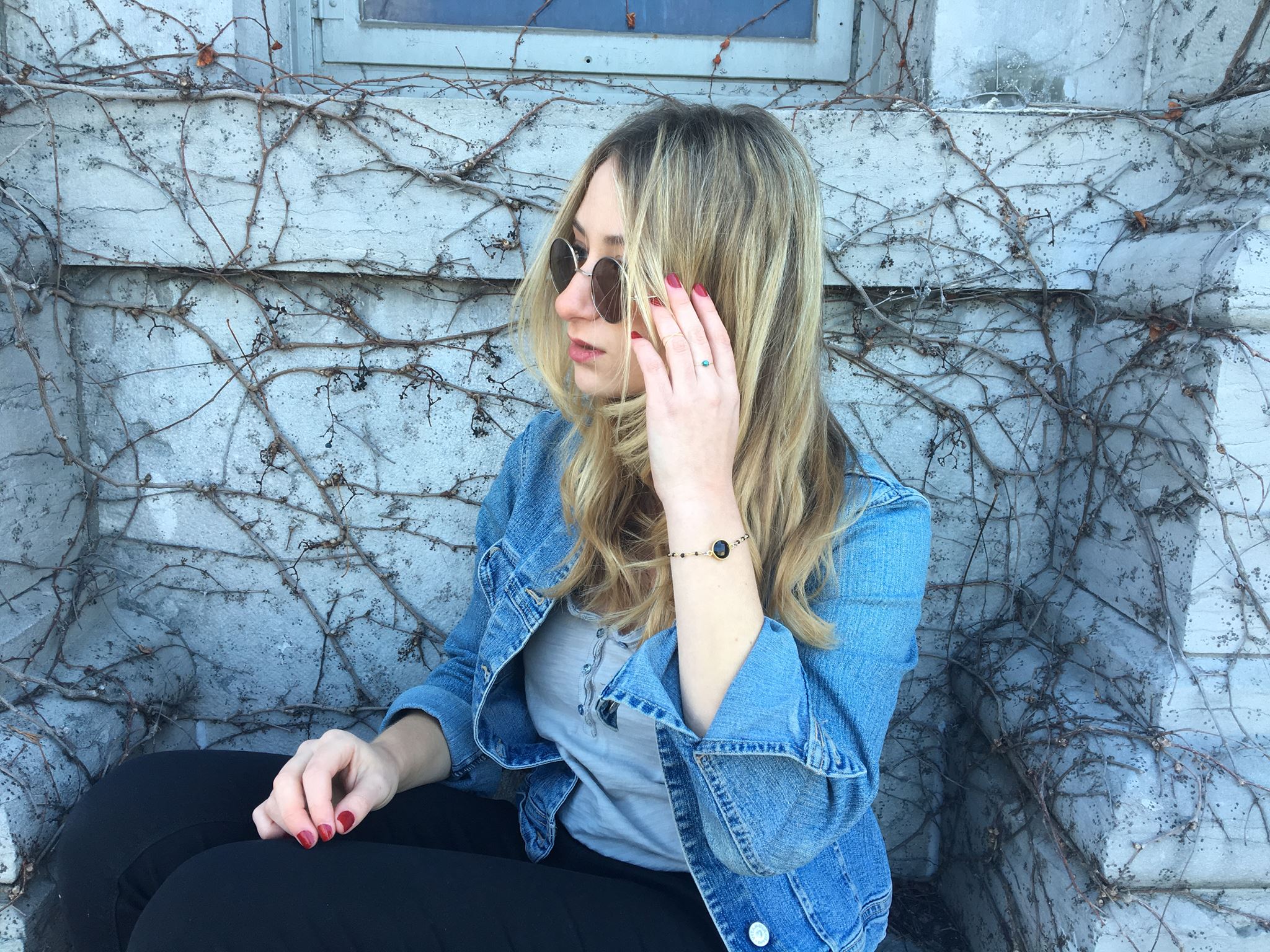