Here’s what went down with Joe Biden today

After checking in, receiving my press pass, walking through metal detectors, and getting searched by the Secret Service, I was finally inside the Goldstein Auditorium to hear the Vice President (and SU alum) Joe Biden speak about one of the most important issues of our generation – sexual assault.

The excitement could be felt as soon as you entered the auditorium- music was blasting, Otto was dancing in the crowd and everyone was excited to hear the Vice President of the United States come home to his alma matter. 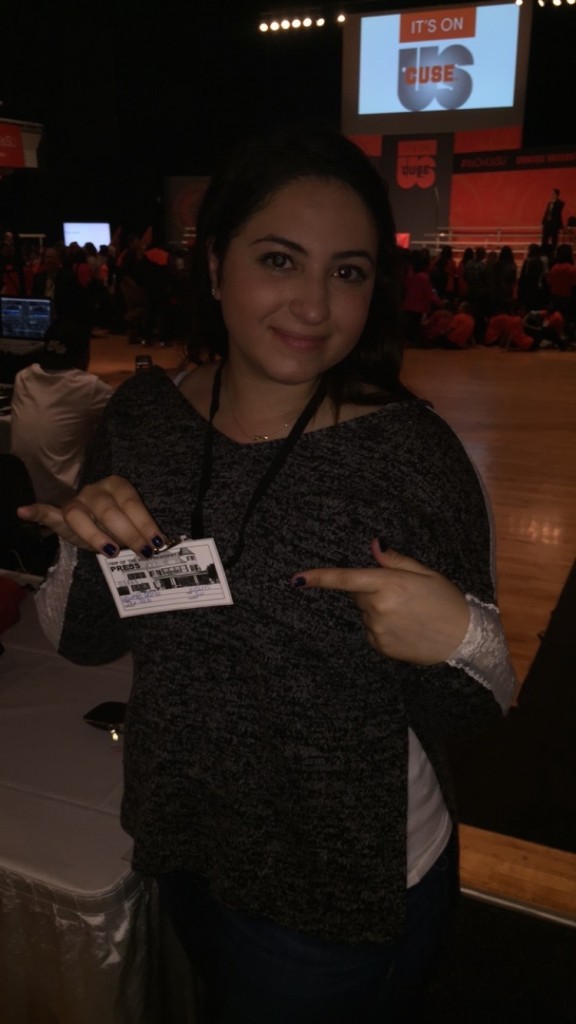 Your girl with her #official press pass for Joe Biden

Before Vice President Biden walked onto the stage with roars, cheers and standing ovation from the crowd, the event started off with a public service announcement from Biden’s “It’s On Us” sexual assault prevention campaign, featuring actors Jon Hamm, Kerry Washington and even POTUS himself.

After this, Student Association President Aysha Seedat spoke about Syracuse University’s efforts to decrease sexual assault on our campus.

The event also featured speeches from survivor and SU graduate student Megan Greenley, The Panhellenic Council and Eric McGriff, who explained the importance of men’s roles in ending sexual assault.

The audience was also treated to performances from the SU band, and accapella groups “Orange Appeal” and “Main Squeeze.” 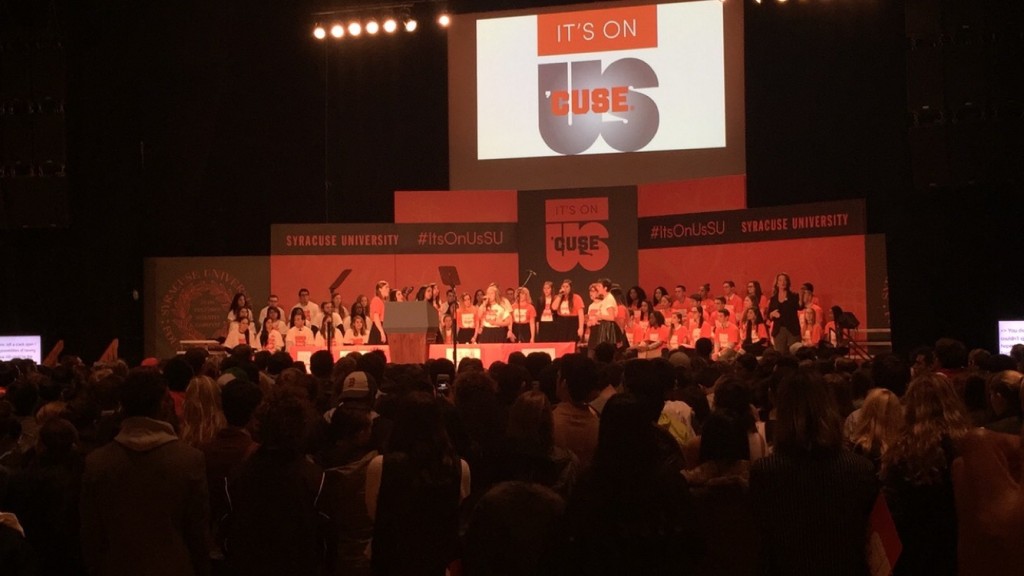 Before Biden made his grand debut, New York State Congressman John Katko (another SU alum) and Senator Kirsten Gillibrand both shared why they believe sexual assault awareness is important and why we, as students, faculty and administrators must stand up and advocate for our survivors (1 out of 5 college students have experienced unwanted sexual contact), and each other.

As the crowd waited patiently, Chancellor Kent Syverud came up to the podium to congratulate the SU community on the role they’ve played in raising awarness for and preventing sexual assault.

“Faculty, students and staff have been working hard to end sexual and relationship violence. All of you should be very proud of the role you’ve played in this effort,” he said.

Syverud then introduced junior Samantha Skaller, one of the 17 students nationwide to serve on the “It’s On Us” Student Advisory Committee. Skaller shared her experience as a rape survivor, and how she learned to accept that it wasn’t her fault, and that “it is on SU to break the silence” regarding sexual assault. 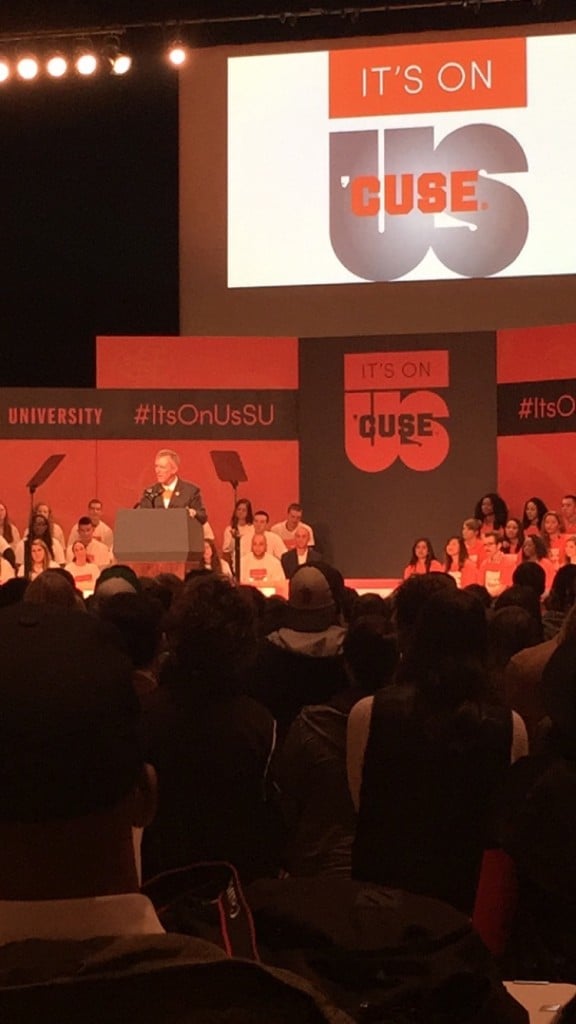 Then, it was time for Biden.

The room roared, the applause lasted minutes, as VP Biden shouted, “Go Orange! It’s good to be home!” and thanked the Chancellor for letting him back on campus today.

Before going into the topic of sexual assault, he joked about his visit to Clemson this week, saying,”Clemson’s coming to visit, and I promise them I’d be wearing Orange. No other than Syracuse Orange.” 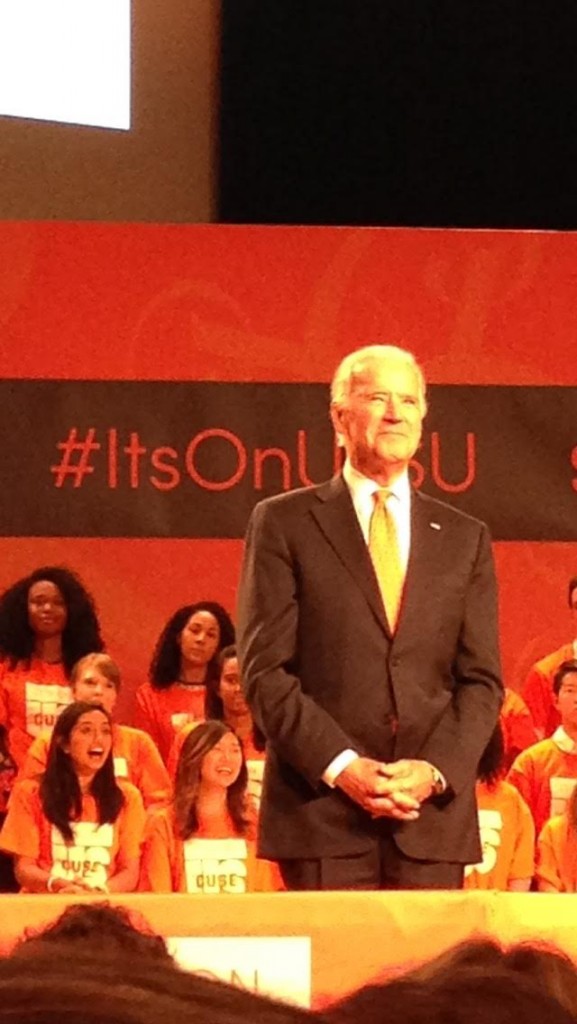 Following the audience’s laughs, he continued, on a more serious note, “What we most need, is fundamental change in our culture. The quickest place to change is to change it on the campuses of America, and in the process save lives on thousands of young women and some young men suffering the consequences of sexual abuse and rape.”

“Sexual assault isn’t about sex. It’s about power,” he affirmed. “One assault is too many.”

Another topic he touched upon was the importance of getting men to step up, acknowledging it takes a lot of courage for a male to stand up and say something.

“The real definition of manhood is having the courage to do the right thing.” Biden even shared a personal story about when his late son, Beau, decided to say something to one of the males in his co-ed dorm while in law school at SU.

“He ended up paying a price, because this guy was the captain of a particular team,” later adding that “Beau’s little brother came up and beat the hell out of the captain,” as the audience laughed in unison.

Biden got extremely passionate, shouting into the microphone to make his message heard.

“Guys, it’s not complicated. You’re an upperclassmen. You’re at a frat party. A young freshman girl gets drunk, like too many do, especially in your freshman year.

“She’s nearly passing out, and you see your roommate or fraternity brother walking her upstairs. Have the gumption to step in.

“TELL HIM. EXPOSE HIM. SAVE HIM. HAVE THE NERVE.  Look at that young woman as if she was your sister or your mother. You know it’s wrong. You know!” 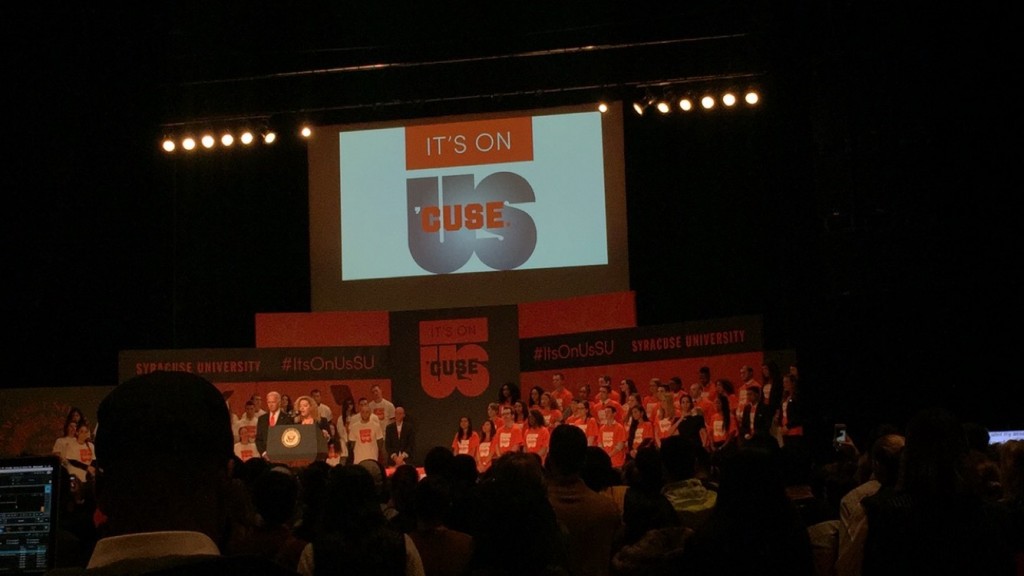 In addition, Biden said he didn’t expect eveyone to stop having fun.

Biden’s speech was moving, and it was surreal to be in the same room as the Vice President.

He spoke to students, faculty and everyone in the room on a personal level, as if it was a one-on-one conversation.

It felt like I knew him personally, from the intimate nature he was speaking to us in. From this, I, as well as many others surrounding me, have learned that it truly is on us to stop sexual assault on our college campuses, and I encourage you to take the pledge here. 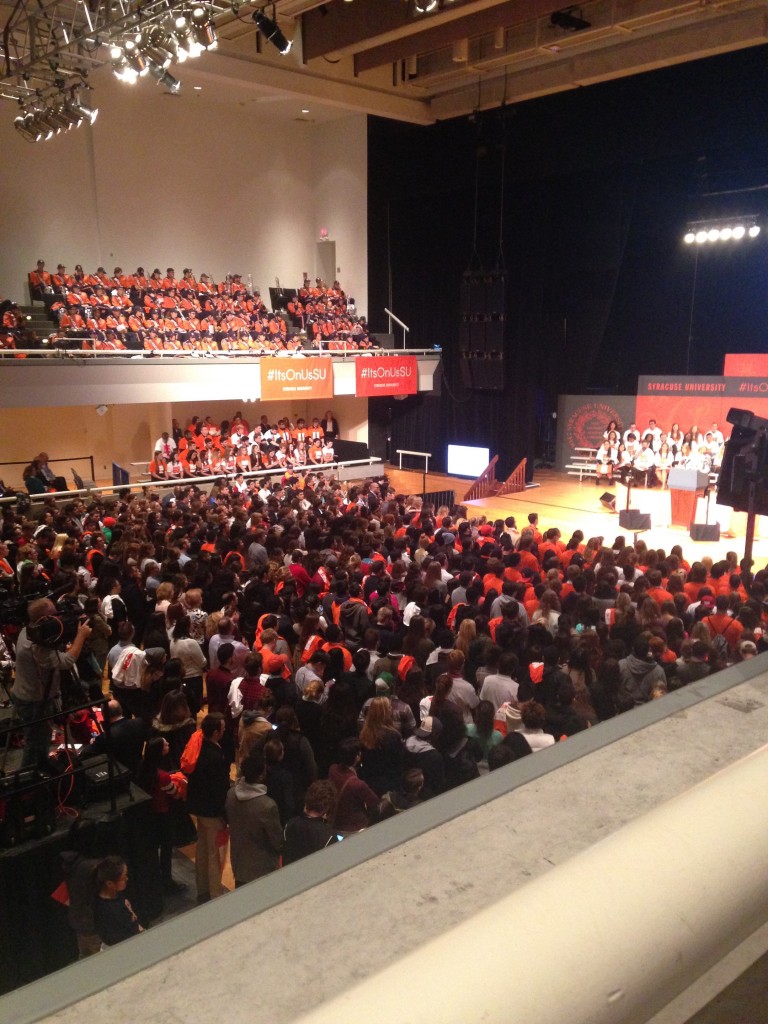