You better be ready when the band plays ‘All Right Now’

Stanford has tons of spirit especially when it comes to football season. At the top of the PAC-12 Division I teams, the 2016 Rose Bowl Winner, and with a returning Heisman Trophy runner-up, Stanford is the team to watch. From what I have learned from attending all the home games last year and being a member of Stanford’s Axe Committee, here are some of the best game day traditions.

We came, we Shaw, we conquered. ?: @jftimages

A photo posted by Stanford Alumni Association (@stanfordalumni) on Jan 1, 2016 at 8:32pm PST

On game day, you better be wearing Cardinal Red in some form. Regardless of how cold, rainy, or late it is, the Red Zone is always filled with spirited students wearing Red Zone swag or decked out completely in red body paint. Dorms often roll out in mass to the football games, especially the freshmen. Hey, if you do something wacky enough or eye-catching, the ESPN cameramen may pan over to you and broadcast you right on national TV (yay for airtime! Something to call your mom about).

A photo posted by Stanford Alumni Association (@stanfordalumni) on Nov 8, 2013 at 2:05pm PST

Don’t look like a frosh confused during Stanford’s well-known in-game cheers and traditions. A few include: Jangling your keys as the kicker prepares to kick the ball. Pointing down the field three times accompanied by “oh”s followed by “FIRST DOWN!” when we get a first down. However, the cheer that is the most fun and important to get down is the timing for the jump when the band is playing “All Right Now,” our unofficial fight song. If you don’t get it the first time, keep practicing because it’s really rewarding to see the unified wave of people jumping as the band crescendo is broken by the loud “WOOOO!” 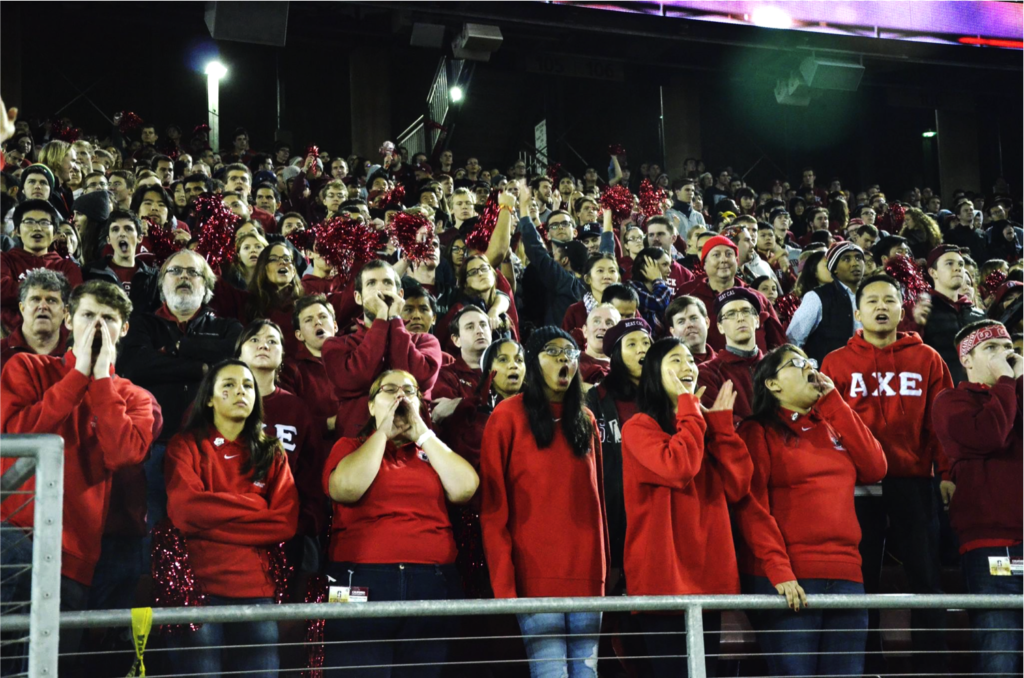 Also don’t be idiotic and cheer when we are on offense or else you will have to be shushed; only yell/cheer/bang on things when we are on defense so we can disrupt and distract the opposing team.

Don’t leave during halftime because then you’ll miss the wonderfully unique and always novel halftime show by our one and only Leland Stanford Junior University Marching Band. With a different plot-line/storyline every game, often poking fun at current events or our opposing team (oftentimes in controversial ways), this show is definitely worth seeing. Furthermore, where else would you be able to see students playing on stop signs and sinks as well as driving a makeshift cardboard Trump car or wearing a cow costume against Iowa? There’s definitely no other band quite like LSJUMB.

At many home games, you can pick up your annual free Red Zone t-shirt with your student ID. Also, as an incentive to have you out of your seat and cheering in the front rows is the multitude of free Stanford football T-shirts thrown at the stands during the game by Stanford Axe Committee. 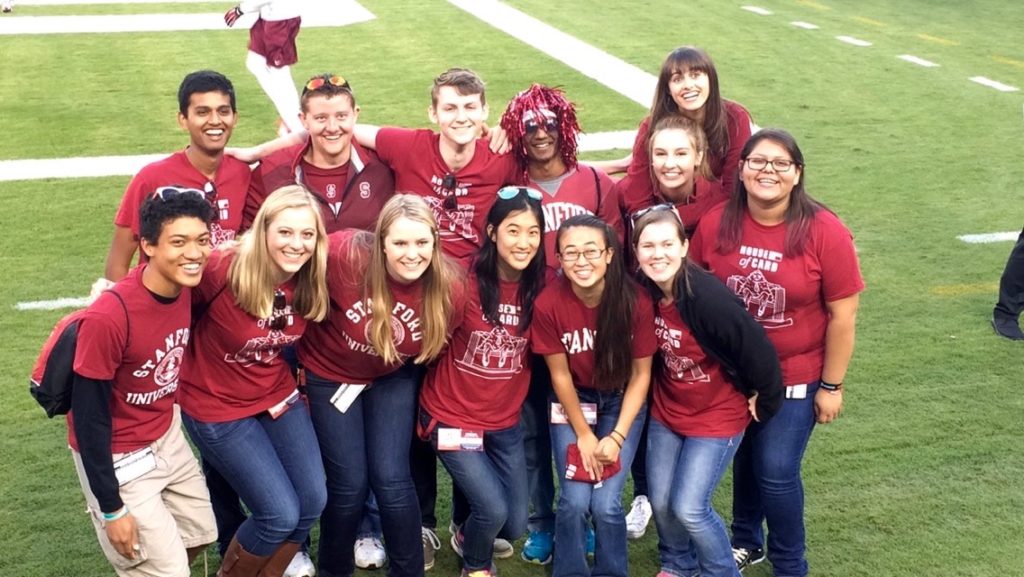 There are also meal swipes you can use at home football games at Stanford Concessions, which don’t count toward your weekly meal swipe allotment. This is very useful info especially since many Stanford games are night games and free nachos, pizza, and hot dogs work wonders on hungry college students.

By far the most intense and hyped-up week of the whole football season (and maybe the whole year), Big Game Week is the week leading up to the much anticipated and heated game (battle) between us and our nemesis, Cal, that will determine who will possess the Axe (which is currently in the safe hands of Stanford, of course). 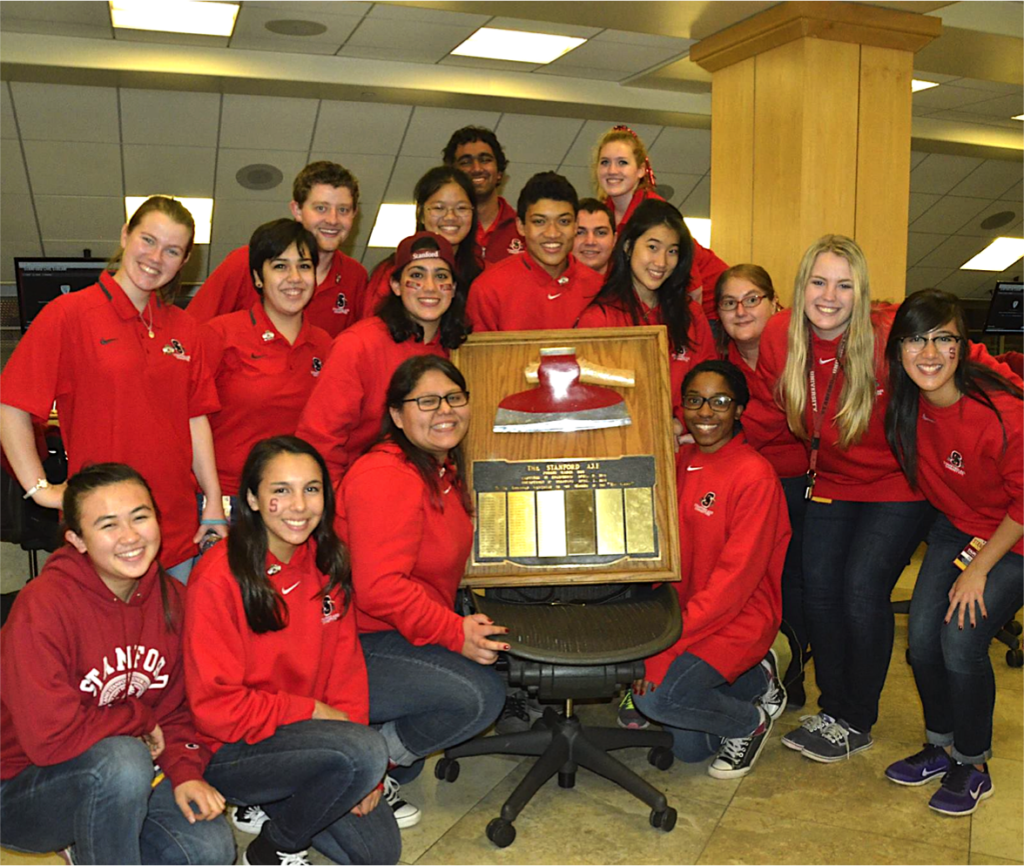 Throughout the week, there will be many stunts and events that demonstrate our rivalry with the Golden Bears. These include having an annual musical comedy to encompass the Stanford-Cal rivalry (Gaieties), a capella groups singing about how much Cal sucks, and the occasional impaling of a teddy bear on the Claw fountain while dripping red dye into the water…. 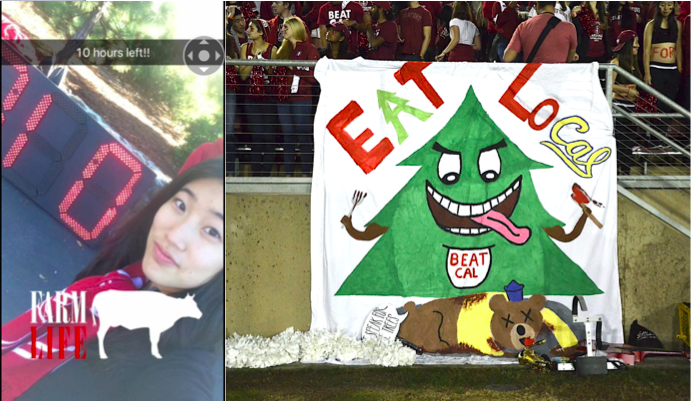 Rushing the field (if you’re lucky)

This is a very rare occurrence, usually only during very special circumstances. Rushing the field must definitely be done with caution. The best bet is to see what everyone does around you and get the timing right (basically don’t get trampled by the crowd). Never mistakenly rush the field during the game, that’s a huge No-No and we don’t want any repeats of consequences from the past. 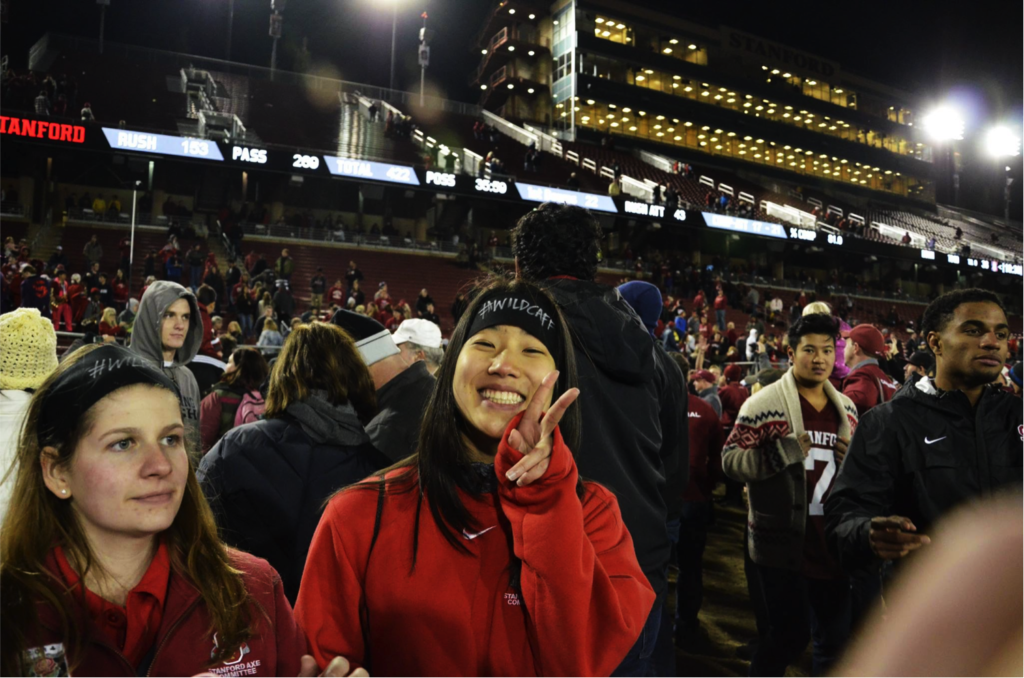 Pic from rushing the field at Senior Night: Stanford vs. Notre Dame Game 2015; Notre Dame had a 36-35 lead with 30 seconds left, but Conrad Ukropina came in clutch with a 45-yard field goal for a Stanford win 38-36

All in all, these are a few of Stanford’s best game day traditions. There are many other fun and amazing things that happen during Stanford’s football season including pre-gaming, dorm bonding, away game viewing parties, and more. Definitely try your best to make it to Stanford games during your student years since so many memories are made by attending these games with friends. Plus you won’t be getting free tickets once you graduate (and since the stadium is often quite packed, you won’t be getting as good seats as when you were in the Red Zone). Finally, to end on the most appropriate note, BEAT CAL!

When you #BeatCal 6 years in a row ???#GOSTANFORD

A photo posted by Stanford Football Fans (@stanfordfootballfans) on May 31, 2016 at 3:05pm PDT