Sara said: ‘RU Police chided me for calling 9-1-1 and ultimately declared that this issue was not their domain’

Senior Sara Rosen released a photo on her Facebook to what appears to be a taped swastika on the ceiling of her Livingston apartment.

Rosen posted the picture about nine hours ago and the post already has 116 shares. 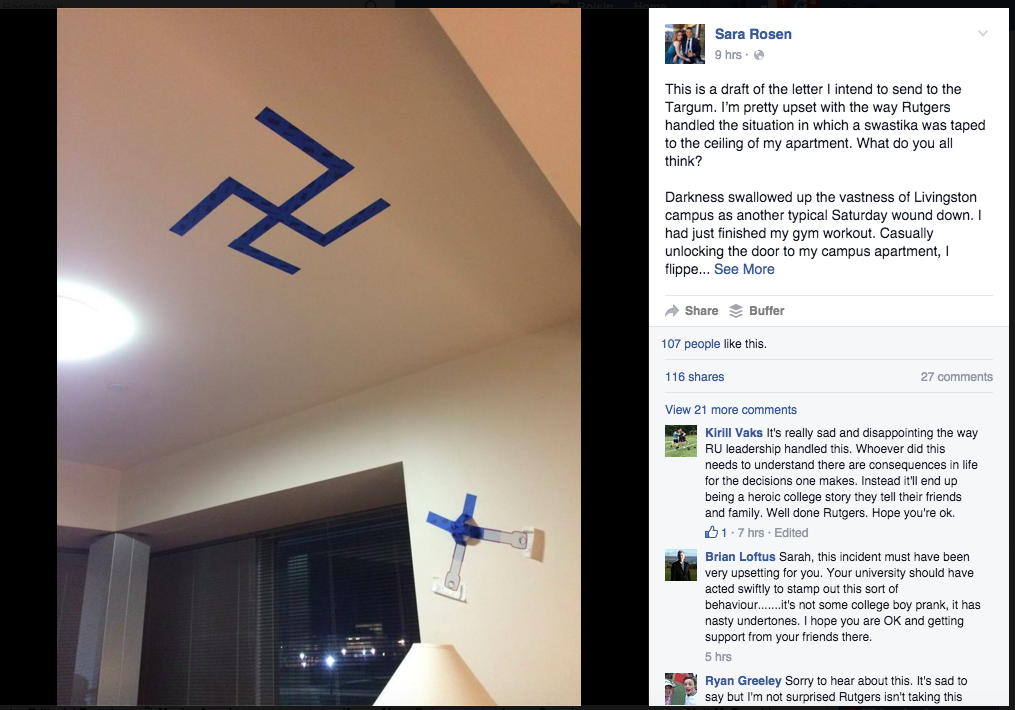 Rosen claims she found the offensive symbol when she returned to her apartment on a Saturday night after a workout, and immediately contacted RU police, her parents, and called 911.

In a Facebook post Rosen wrote: “My dad quizzed me about who would have access to the apartment and if anybody held any kind of grudge against me recently.

The Rutgers student also claimed she was “chided” by RUPD for calling 911. She added: “I strongly came to suspect that [someone I know] was involved but could not definitely prove it. He certainly ran fast enough and hid when the police arrived. He claimed to not know me when interrogated by my apartment assistant.

“There were Hitler postings on Facebook and subsequent deletions.” 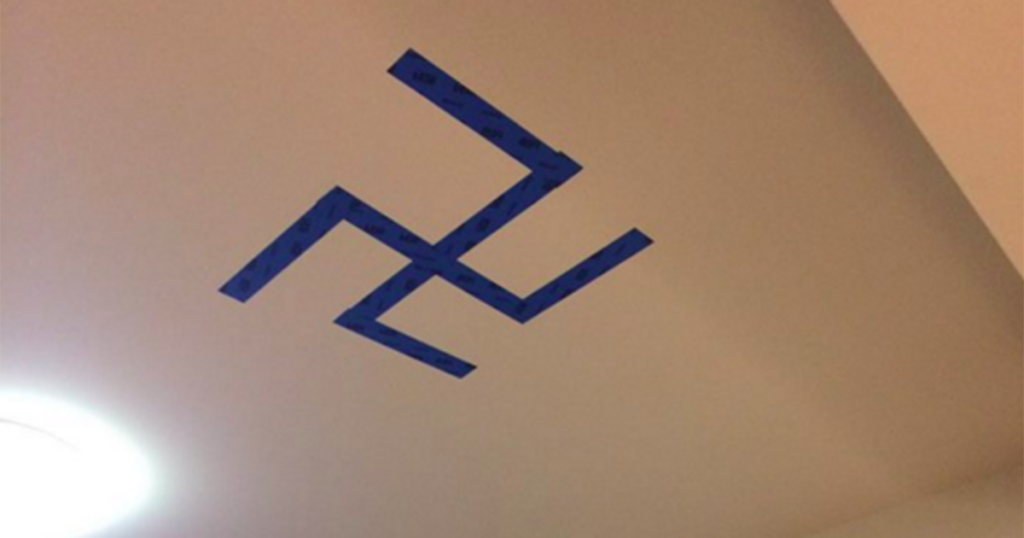 Despite posting that the event happened on Saturday Rosen continued that “in the weeks that followed” she attended meetings with conduct reps, campus and student deans, but is unhappy with how the university allegedly handled the incident.

“Many who hear my story become outraged. But, RU reps seemed to indicate that the whole ordeal was a good time to reflect and quietly use as a learning experience. Feigned empathy, I felt.”

Rosen’s father said: “Unlike, Rutgers, Stanford, George Washington, and other Universities have acted swiftly and decisively. They have not discriminated as to whether the Nazi emblem points clockwise or counterclockwise. These kind of acts are not the equivalent to simple name calling, sticks and stones, not so much.

“Acting out of this nature should not be tolerated. Incidents like this..whether ‘slips of the paint brush’ or ‘altruistic’ greetings penned by misguided youth should not be swept under the carpet of University bureaucracy. Rutgers needs to shout loud and shout often, that it will not tolerate these thinly disguised messages/symbols of hate and intimidation. Period. ”

Speaking to The Tab Sara said: “No student should walk into an empty room and see a swastika, a KKK symbol, a confederate flag with a cross burning —  a student should never be exposed to symbolism of hate. I see no rational explanation for this behavior, this display. A swastika is a swastika, no matter what “direction”. My family, my friends, my peers, my professors can attest to that. When we see a swastika, we see a powerful symbol of hate, intimidation, and a crude attack.

“I cannot think of a logical reason why seemingly bright students would resort to this type of behavior. One of my Muslim friends put it best, ‘I am not even of your faith, and I am offended and feel assaulted.'”

In a statement for The Tab, the University said it takes reports of potential bias crimes extremely seriously and responded saying:

“Following an extensive investigation, which included several interviews with the complainant, witnesses and the suspect, the matter was handled by The Office of Student Conduct and adjudicated. As is the case with any potential bias crime, the facts of the case were forwarded to the Middlesex County Prosecutor’s Office. Upon review, the Prosecutor’s Office determined there was not probable cause to charge the suspect with a bias crime.”