At Rutgers, you’re free to say whatever you want – as long as it’s PC

Once upon a time, college was a place where you could freely voice your opinion and ideas. But apparently even public universities are cracking down on what is acceptable to say on campus.

Greek houses on campus participated by decorating their house in pink banners and ribbons. Fraternity Theta Delta Chi seemed to have the most outstanding display, but some RU students claimed TDX’s decorations and signs “sexualize” breast cancer. The signs in front of the TDX house said “save the ta-tas” and “I love boobies,” but many students argued the messages were offensive and undermined the cause.

Decorated The Manor this weekend in support of ZTA and Breast Cancer Awareness month. @zta_rutgers #ThinkPink

Rutgers officials stepped in to do “damage control” and the Dean of Fraternity and Sorority Affairs asked TDX to remove their decorations.

As a public university, Rutgers students shouldn’t have to censor the way they campaign for certain causes – especially on public grounds.

Before the start of the fall semester, Rutgers released a warning to students through the Bias Prevention and Education Committee (BPEC) website, saying there is “no such thing as free speech.” The statement warned students that all speech comes with consequences. It has since been removed. 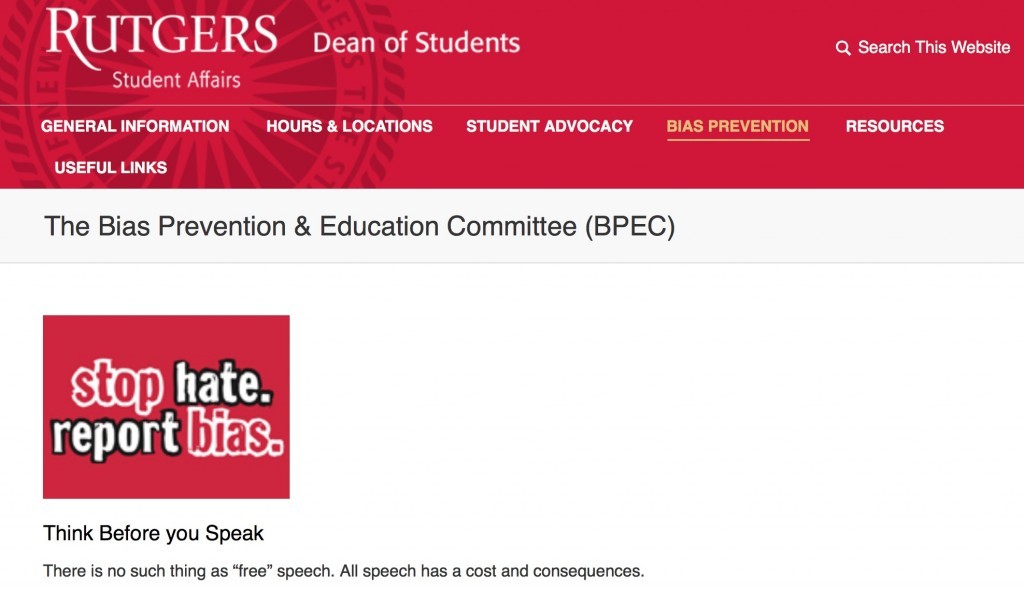 After the release of this message, the university came under fire by several national news sites. But the Director of Student Conduct at Student Affairs, Anne Newman, said the statement was not an infringement of the right to free speech on campus.

So why was TDX forced to take their decorations down? The fraternity did not intend to undermine the cause. In fact, the campaign intended to do the exact opposite.

I am someone with a close relative who is a survivor of breast cancer. The breast cancer campaign is one that hits home, and I don’t think the Greek houses did anything out of line. 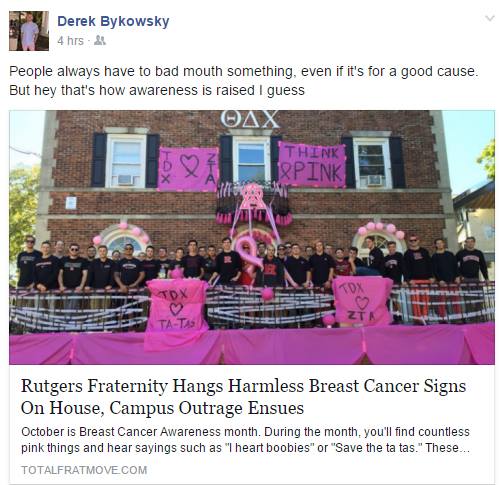 As a Rutgers student, this should scare you. Is this setting a precedent of what we can or cannot say on campus? Are we now required to get approval before we participate in activism that may be “too sensitive” on university grounds?

This issue does not only pertain to students in Greek life, but to any student activist. It’s safe to say the University already does enough to enforce it’s bureaucracy on campus by making it difficult to lead events on campus that are not in the “public forum space.”

The majority of Panhellenic and Interfraternity council chapters aim to organize philanthropic events every semester and tend to have a huge positive influence on the Rutgers community. If you are among those disgruntled students who disagreed with the signs, you are taking away from a positive cause and turning it into a political issue. This only feeds into the Rutgers bureaucracy and students are now required to abide by these arbitrary rules to satisfy another group of students.

Although students should follow a certain standard of civil conduct on campus grounds, they shouldn’t have to relinquish their rights at a public institution. Even though there is currently an obsession with being politically correct, it seems like it’s the new way to police unpopular discourse.