Everyone stay calm: there’s no gunman on the loose at Rutgers.

Initial reports this afternoon of a shooter on Livingston are untrue, as Rutgers Police have confirmed the suspect did not have a weapon, but some sort of tool belt.

Rumors flying around campus suggested a rogue shooter was stalking through Lucy Stone Hall as early as 1:30pm as authorities put classrooms on lockdown.

Police investigated the claim and found the man just had a tool belt strapped to his waist and not a weapon.

Responding to claims of an armed man roaming through Livingston, Senior Director of University News Greg Trevor said: “That’s untrue. Rutgers Police responded to a report of a suspicious person with a weapon.

“When they arrived they determined the individual in question did not have a weapon. The initial reports were unfounded.”

Students claimed the suspect was mistaken for a gunman because his phone case resembled a gun holster attached to his belt.

Trevor said: “My understanding is he had some kind of tool belt.

He added: “To my knowledge, there was no lockdown.”

College authorities have yet to confirm if the suspect was a student.

The two hour gap between the first reports of a gunman on campus and Rutgers confirming the all-clear angered some – especially as the college did not send out a warning. 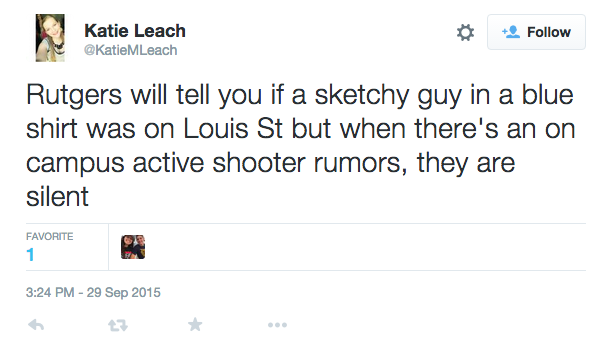 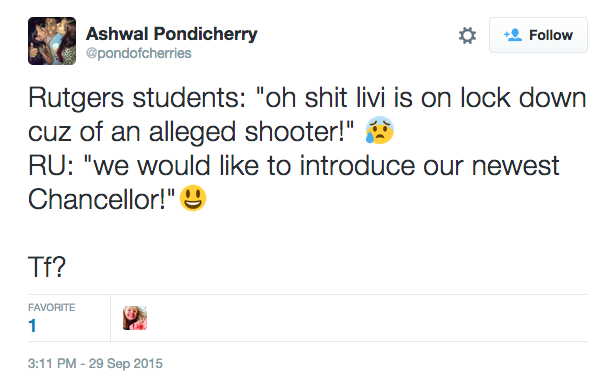