Over a century of change: Honor Code turns 125 at heart of controversy

A 1993 report didn’t mention any instances of administrative intervention in Honor Code amendments, including lowering penalty

As Princeton’s honor code enters its 125th year on Thursday, it stands at the center of controversy. In an email to undergraduates dated January 4th, top university administrators announced that despite receiving overwhelming support, three of the four referenda to amend the Honor Constitution could not take effect.

The decision has stoked fiery criticism from students, many contending that the unilateral move represents an overstep of administrative authority. While administrators portray the referenda as beyond the historical scope of student responsibility, a 1993 report from the Honor Committee did not mention any instances of faculty halting an implementation of a constitutional amendment up to that point. Six amendments to the Honor Code had been implemented by 1993, including changing the size of committee membership, lowering the standard punishment from expulsion to one year suspension, and reforming the constitution amendment process. 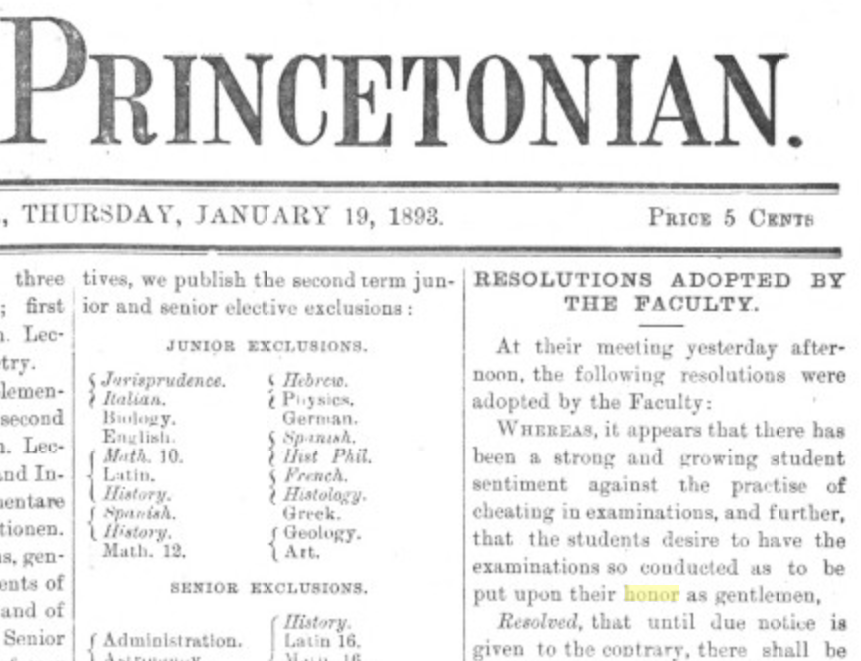 The only departure appears in a 1996 New York Times article, which references an undergraduate-led amendment that called for the expulsion of any student who buys a substantial part of a thesis. Faculty approval was necessary in that instance, as the honor constitution generally only cover written examinations, not theses.

The ability of students to modify the honor constitution without consulting administration was enshrined by its constitution created in 1895, two years after a student proposal at an undergraduate assembly created the Honor Committee.

This constitution, known as the Honor Constitution, enumerates a process to amend the document “by a petition of 200 members of the undergraduate body, followed by a three-fourths vote in a student referendum as conducted by the Elections Committee of the Undergraduate Student Government”

Over the years, the Honor Constitution was often cited as the governing document of the honor code on Princeton’s website, the Rights, Rules, and Responsibilities handbook, administrative statements, and several times in a 1985 legal decision that upheld the fairness of an honor committee investigation against an accused student.

‘The Honor System at Princeton is the creature of the undergraduate student body: the student body devised it originally, has amended it from time to time, and can amend it further or do away with it altogether when it seems appropriate to do so,’ said then University’s Director of Communications, George B. Eager, after the decision was rendered in 1985.

His stance seems to contradict that of the current administration, who say that the new reforms represent a significant departure from prior practice. Dean of College Jill Dolan also told The Tab that if the Honor Committee does not follow the directive of the email, it will forfeit its authority.

Yet, historically, Eager’s position appears to have been standard. An early as 1909, a report by Princeton University’s Philadelphia Society, which ultimately evolved into the Student Volunteers Council of the Pace Center, described the position of Dean Fine. As an administrator present when the Honor System was established, Fine had been in the closest touch with the system.

“The Honor System would never have drawn the breath of life if the constituted authorities had devised it and attempted to put it into operation. If the Faculty should interfere with it now it would die at the touch. It is wholly a student affair of student origin and of student support and as such has become the most important of all those powerful influences known as College Traditions,” Fine said.

In 1920, a vote of the faculty was initiated to extend the honor code to apply to all written work. The Honor Code was reverted back to only applying to examinations in 1927.

Two decades later in 1953, former President of the University Robert F. Goheen ‘40 reaffirmed Fine’s sentiments. He stated that the trustees, faculty, and administration of the University have delegated the determination of all reported in-class violations to the Undergraduate Honor Committee through the Honor Constitution.

He further noted that faculty actions on decisions of the Honor Committee are “simply for the purpose of officially recording the decisions” and “do not pass judgment” on the actions of the Committee. 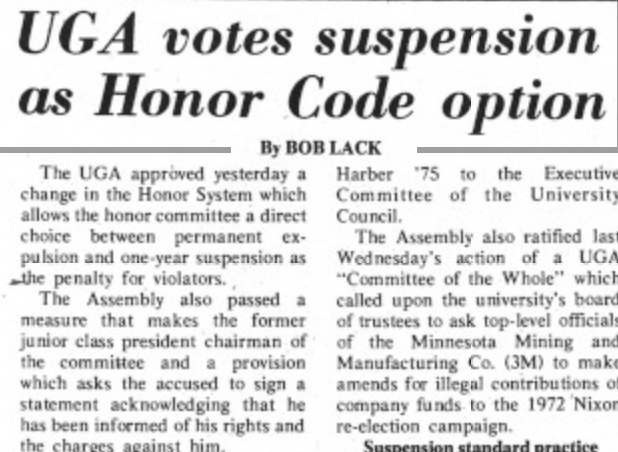 More explicitly stated in its 1968 report, when the honor code turned 75, the honor committee noted that it has assumed the responsibility of interpreting the constitution in specific cases and in light of the changing university.

While the controversy over the Jan. 4th email continues, current Chairwoman of the Honor Committee Carolyn Liziewski ’18 has stated that she will be following the instructions in the administration’s email.

As such, Liziewski noted that she cannot act based only on a decision by the students.

“The members of the honor committee have to uphold an agreement between faculty and students.”